Pride Month 2020: brought to you by video games and technology

Pride Month is a powerful annual tradition supporting identity, celebrating human rights, fighting against adversity and remembering the many members of the LGBTQ+ community who have suffered injustice and stigma due to hate crimes, HIV/AIDS and systemic oppression. It’s also a time where the community at large acknowledges the contributions of its LGBTQ+ members across all industries and aspects.

As the year 2020 continued its rampage against our social lives, the 50th annual Pride Month faced its own share of obstacles, with social distancing and isolation radically disrupting what is usually a very social event. Instead of taking to the streets this year, the LGBTQ+ community celebrated Pride Month in the digital realm, organising a range of virtual activities to come together and show its support during these trying times.

Amongst all of the virtual festivals and events that took place, the video game industry played an active part in the celebrations, with communities rallying together in game worlds while developers organised fundraisers and gave voice to their own LGBTQ+ team and community members. Today, we’ll take a look at just a handful of the ways that the video game industry helped the LGBTQ+ community create a unique Pride Month befitting the unique global situation. 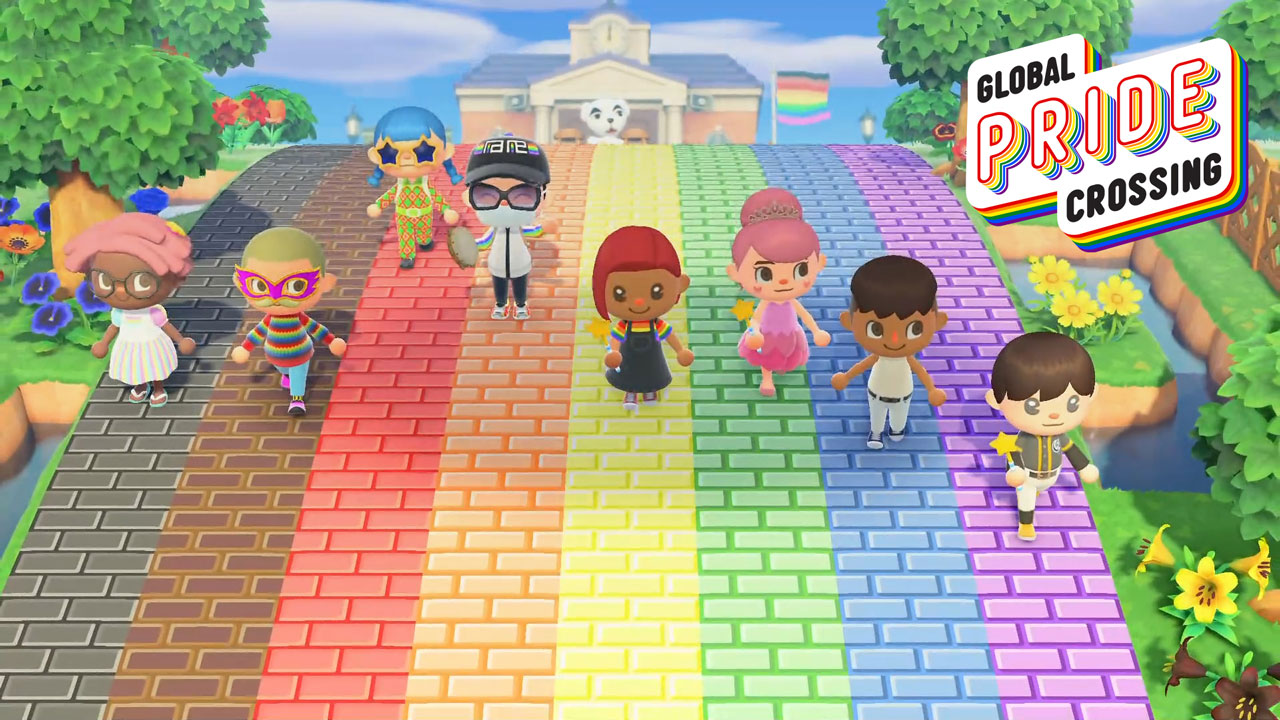 The message is simple: be yourself!

Home is Where the Save Is

Barely a day has gone by throughout the lengthy — and now resurgent — isolation period where a quirky new trick or adorable new design hasn’t seen Animal Crossing: New Horizons dominating news and discussion cycles all around the internet. It’s no surprise, then, that the Animal Crossing community celebrated its own week-long Pride Festival via the hashtag #GlobalPrideCrossing. Players shared clothing designs, opened their islands to one another and filled the Animal Crossing archipelago with vibrant colours and love. The festivities peaked on June 27, when organised parades took place around the world and livestreams focused on a curated island that celebrated inclusivity.

Animal Crossing: New Horizons and Pride are almost the perfect match. The game has supported individuality, community and creativity since day one, and it’s also supported the LGBTQ+ for its entire life cycle, normalising queer culture by removing gender labels to support non-binary roles and allowing players to wear any type of clothing that they identify with. Given a platform to discuss these changes and how they’ve made New Horizons a truly gender-neutral space, game director Aya Kyogoku told the Washington Post that “we basically wanted to create a game where users didn’t really have to think about gender or if they wanted to think about gender, they’re also able to.”

Not to be outdone by the new(er) kid on the block, The Sims’ community had its own celebration of Pride Month, organised through the hashtag #SimsPride2020. Streamer and YouTuber The English Simmer hosted a massive celebration on her Twitch channel on the final day of Pride Month in order to bolster connectivity and support for the LGBTQ+ community. EA got on board by sponsoring The English Simmer’s stream, and the celebration extended onto social media channels and EA’s forum, further embracing expression and equality through gameplay.

Even the nostalgic gem Runescape got in on the Pride celebrations, with an event organised by The LGBT Corner that featured giveaways, party effects and fireworks as it celebrated diversity, fashion and community. An organised parade marched through Lumbridge as well, with players able to choose to participate or simply cheer it on. It was genuinely heart-warming to see that this event in particular was a success, considering the community’s utterly despicable response to Jagex’s first attempt to organise a Pride event back in 2017, where members of the community flooded the game with homophobic comments and complaints demanding that the event not take place. Jagex ran the event anyway, but it was arguably tarnished by this particularly bigoted response, so it was nice to see 2020’s event considerably better-received. 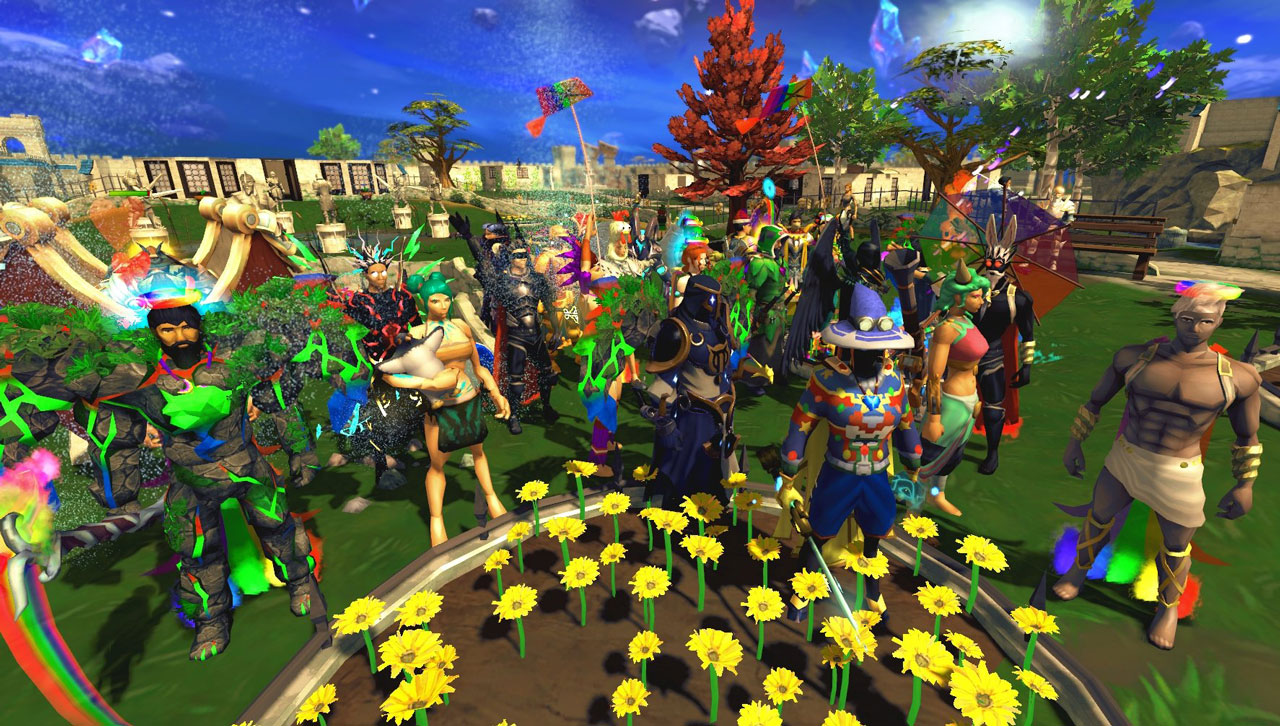 In addition to its continued excellence with regard to accessibility and social change through video games (recognised by its recent 2020 Games For Change Industry Leadership Award), Microsoft has continued to be a monolith of support for the LGBTQ+ community. This year, the company used its platform to amplify the voices of LGBTQ+ members of its Xbox Ambassador program, allowing them to share what their favourite video games have meant to them over the years. Microsoft has a long history of providing an inclusive, equitable working environment for members of all communities, and has been a fantastic example for other companies in creating effective policies regarding human rights and equality around the world.

Bungie pitches into the Pride celebrations every year, using the Destiny franchise’s incredible success and loyal community to lead the push for equality and provide support to numerous social causes. This year’s Pride Month saw the developer support the It Gets Better Project in raising funds for young LGBTQ+ individuals facing hardships and abuse, while also strongly supporting the ongoing Black Lives Matter protests and affirming the need for justice and equality.

Pride Month saw many communities and organisations step up to host events via livestreams and forums as well. Call of Duty: Advanced Warfare developer Sledgehammer Games partnered with the online community Gay Gaming Professionals (GGP) to host a three-day festival with giveaways, streams, webinars and virtual dance parties to celebrate the intersection of LGBTQ+ history and gaming culture.

Gayming Magazine, a year-round stalwart of LGBTQ+ celebration, has partnered up with personalities and communities around the video game community (GGP included) to keep the celebration of Pride and gaming going for another two months under the DIGIPRIDE banner. Like the other organisers, social media has been the galvanising tool for community involvement, with #DIGIPRIDE2020 allowing for individuals to contribute to the event and share their experiences, achievements and stories. Interviews, panels and exposés are set to continue throughout the Northern summer (our winter), alongside livestreams and regular events based in the lovable Animal Crossing: New Horizons. 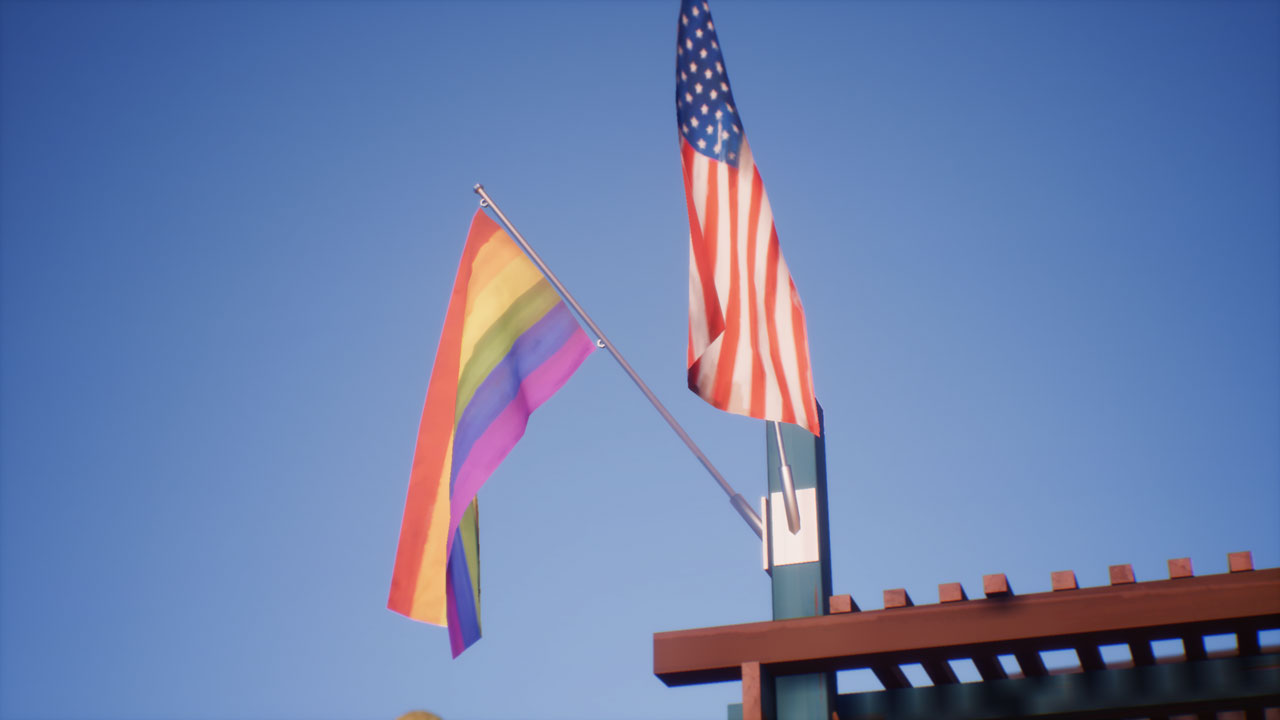 An accidental screenshot from Life is Strange 2, but one of my favourites.

The 50th annual Pride Month had a distinctly digital footprint compared to previous celebrations, but it has presented more opportunities than ever to get involved thanks to its integration in the digital world. It’s been truly wonderful to see gamers and non-gamers come together in virtual worlds or through technology to share their experiences in tough times. I’m particularly happy to see the reports of Runescape’s Pride festivities; Runescape is a game I grew up playing and my own experience was marred by homophobia, so it’s great to see that its community has grown more tolerable and accepting with time.

Although I, like everyone else, hope to see the COVID-19 curve flattened and all of the restrictions that come with it eased, I am excited to see how the gaming community applies the virtual activities and connections it developed this year in events all year round, Pride or otherwise.

[…] have come together to support and uplift Queer identities and culture. Earlier this year, I wrote about the way Pride celebrations managed to survive COVID-19 isolation, with gaymers rallying in digital spaces with the support of industry personalities and […]