Vampire: The Masquerade – Bloodlines 2 Has a Lot to Live Up To… And a Lot to Improve

Continuing the recent trend of developers and publishers looking backwards in order to move forward, Swedish publisher Paradox Interactive dropped a bomb of an announcement with Vampire: The Masquerade – Bloodlines 2. That’s right, we’re getting a sequel to one of the most beloved PC cult classics of all time, with Brian Mitsoda returning as lead writer – and this time, it’s coming to console as well!

After the initial excitement settled down, some fans began to voice concerns about the upcoming sequel, worried that the sequel might soften the World of Darkness’ “edge” somewhat. With that in mind, I thought it would be a fun idea to look back at the original Vampire: The Masquerade – Bloodlines, to see why it was such a beloved game and acknowledge its many issues and ultimately see what Paradox and developer Hardsuit Labs need to learn from – and improve on – if the sequel is going to come close to that level of success.

It’s got to actually be finished:

By now, it’s pretty common knowledge that Vampire: The Masquerade – Bloodlines negotiated some considerable issues during its development: not only was it released on the same day as a little game called Half-Life 2, but Troika Games developed the game using a Source engine that was still in active development itself and publisher Activision rushed it out the door well before it was finished, adding salt to the wound by shutting Troika down only a few months after the game’s release.

It’s no surprise, then, that Activision and Troika released a game that was almost unplayable, complete with bugs everywhere, broken quest lines, chunks of cut content, and a general feel that Troika took – or, was forced to take – everything that it hadn’t finished and lock it in the basement, hoping and praying that nobody would ever stumble down there.

Thankfully, someone did stumble down there: Dan Upright put together an “Unofficial Patch” – which Werner Spahl would eventually take over – that fixed many of the bugs, added missing features including (believe it or not) an options menu, and restored much of the content that was left unfinished when Troika was forced to push the game out.

It goes without saying that the sequel should not need a decade and a half’s worth of patching to come close to being a complete game. A failure even a fraction as catastrophic as the original’s will go down horrendously in the current industry climate – especially when you add the console markets into the mix; that’s more people you can annoy if you mess it up and in this day and age, even the slightest modicum of failure can kill a whole company. Paradox is undoubtedly aware of this, and so we can expect to see the publisher supporting and nurturing Hardsuit Labs throughout the process. 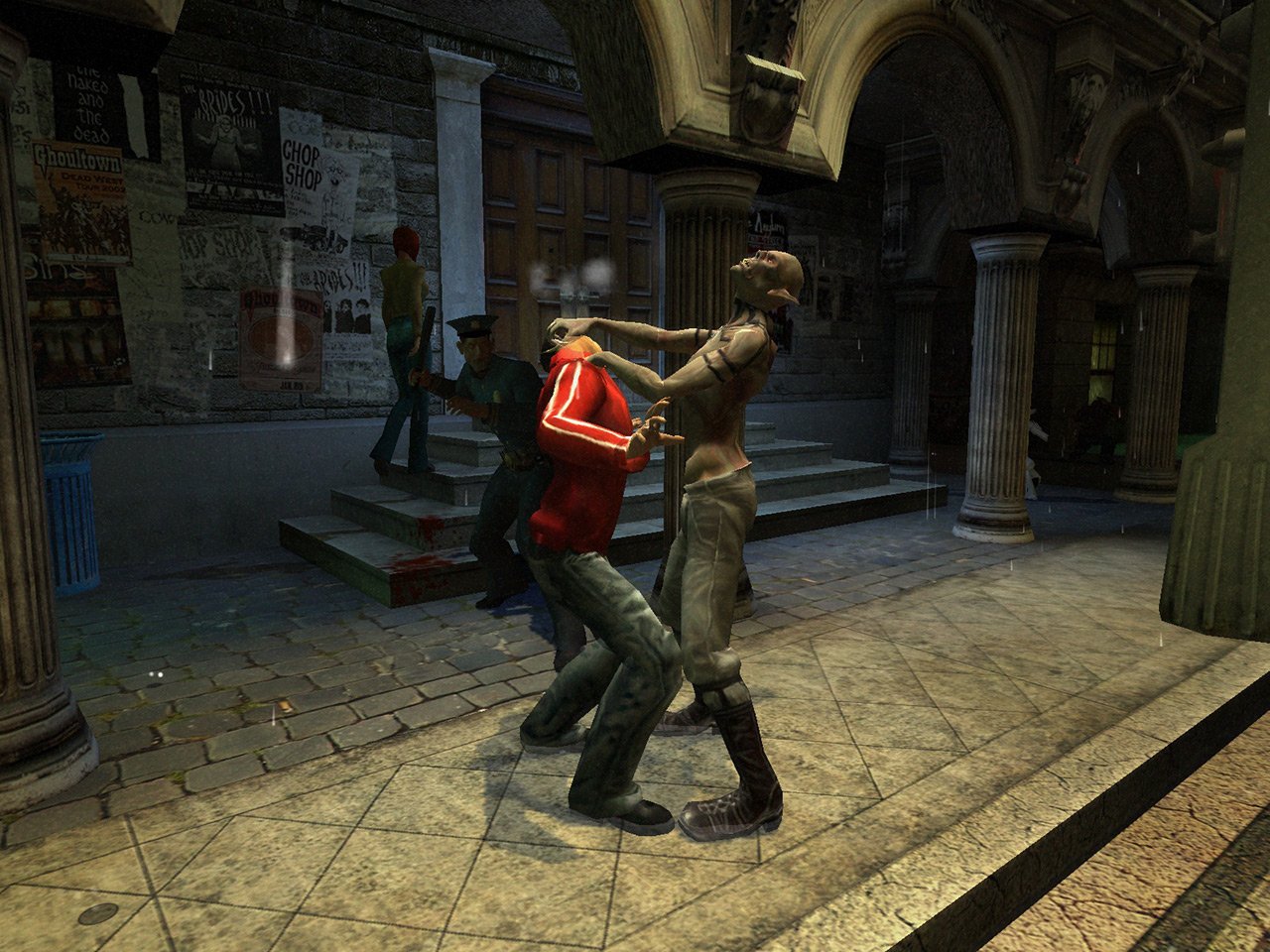 Perhaps the most problematic aspect of Vampire: The Masquerade – Bloodlines – aside from the state it launched in, of course – is its combat mechanics, which Troika split into three core areas: ranged combat with firearms; melee combat, both armed and unarmed; and the use of “Disciplines”, supernatural abilities that vary based on your chosen clan. Each of these skills comes with its own stats that need to be levelled and worked on throughout the game.

That sounds pretty typical for an RPG, and it is, but the issue comes to the fore as you start playing. Since the firearm that you start with is, for lack of a better word, shit, and the skill itself takes quite some investment before it becomes at all useful, your only real option when it comes to early-game combat is melee, which is floaty at best and often devolves into a game of Rock’Em Sock’Em Vampires. 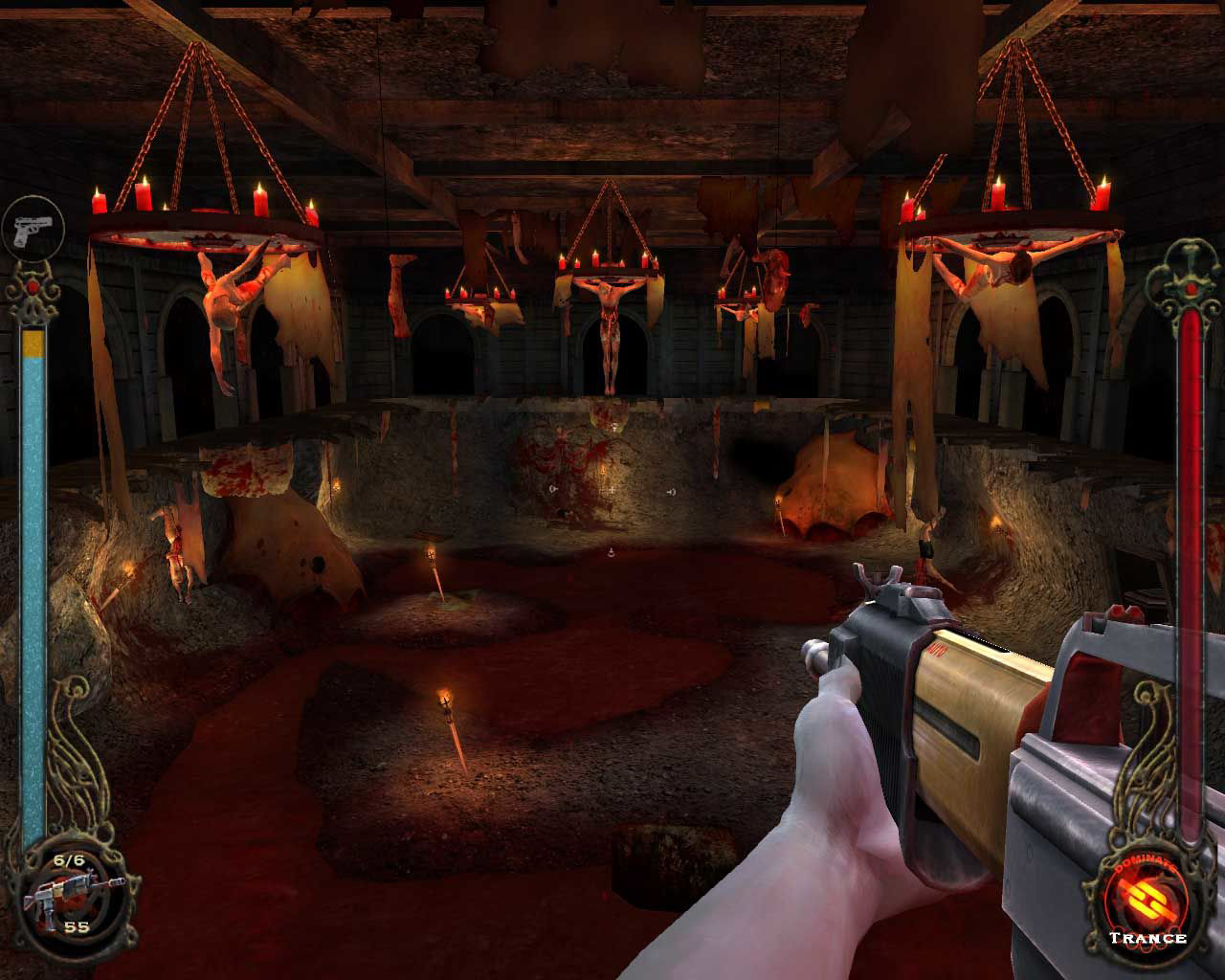 Throughout the early game, then, Troika implicitly encourages players to invest in their melee combat skills. That would be more than okay if the late- and end-game didn’t all but negate melee combat, forcing you to use your likely-underdeveloped ranged combat skills against enemies that can decimate you in close quarters, or in wide open arenas where the enemies carry automatic rifles. It’s an imbalance that impacts your progress, decision making and sense of freedom to play the game how you want to play it, and it’s one that’s difficult at best to negotiate.

That leaves Disciplines to almost bridge the gap between the two, and they do an admirable job of it. Unfortunately, they can’t completely alleviate the aforementioned issues with combat, but by giving players the ability to employ mind control, invisibility, or even just to buff their existing attributes, they do create some interesting gameplay scenarios. They’re fun to use and work with, and they create a level of replayability given that each clan has its own set of Disciplines to employ.

Considering the state the game released in, the rest of Bloodlines’ gameplay was perfectly fine – it’s just the combat that needs serious work. If Hardsuit Labs pays adequate attention to ensuring that Bloodlines 2’s combat is balanced enough that players can really choose how to play, there’s no reason why it can’t stand up to more popular role-playing titles as one to watch in 2020. The writers need the same freedom they once had:

Given just how broken Vampire: The Masquerade – Bloodlines was from a technical standpoint, it’s amazing to see just how much of a cult classic it became, and I’d argue that that comes down to its absolutely phenomenal writing. Troika presented and incredibly authentic and grim world covered in an early 2000s Nu Metal-infused aesthetic edge. It’s a very contemporary style of writing; the main and side quests are all character-driven, and the game deals with subject matter that could easily have been tasteless had the writers not used the world in the way that they did.

Vampire: The Masquerade – Bloodlines revels in the fact that it’s telling a story about monsters. There’s no real good or evil, not even shades of grey: every character in the game is a monster in some way, shape or form. Whether they’re an “actual” monster – a gargoyle, a ghost, a vampire or a werewolf, just to name a few – or a human who deals in underground snuff films, everyone you meet in the game has done something reprehensible. Despite that, due to the excellently fleshed-out world around them, there are still characters that you’ll identify with, the lesser evils who become the good guys in context. After all, this is a story whose protagonist is a self-serving vampire with no regard for human life. The writing really shines when you consider how it facilitates the role-playing elements. Writing for a game based on the World of Darkness tabletop line allowed Mitsoda and his team to translate a lot of the mechanics and sensibilities that come along with that – specifically, the ability to play an active part in your character’s development through decision-making and, well… role-playing. It comes together to create a unique experience where the game looks like your standard first-person action RPG – think the Elder Scrolls series – but plays like a tabletop RPG that has real-time combat and a first-person perspective.

The number of ways in which you can tackle any conversation in Vampire: The Masquerade – Bloodlines is staggering, with the game letting you choose to solve problems through intimidation, persuasion, seduction, or by using methods specific to your chosen clan. The latter option in particular allowed the writers to flex their muscles a little, most impressively when playing as a Malkavian, a member of a clan whose certifiable insanity results in them often acting and speaking nonsensically. In order to translate this into video game form, Mitsoda’s team rewrote every one of the player character’s lines into deranged, often hilarious alternatives, with other characters acknowledging and reacting to the bizarre things that pour out of your mouth.

At first, it seems like a funny little quirk, but it completely changes the game. It makes conversations infinitely more challenging since you now need to work out exactly what you’re trying to say and what you’re about to say, and it adds a neat little perspective shift, illustrating mental illness through writing and mechanics – something that you can only achieve in a video game, and something that Brian Mitsoda and his team need to be given the freedom to achieve once again. 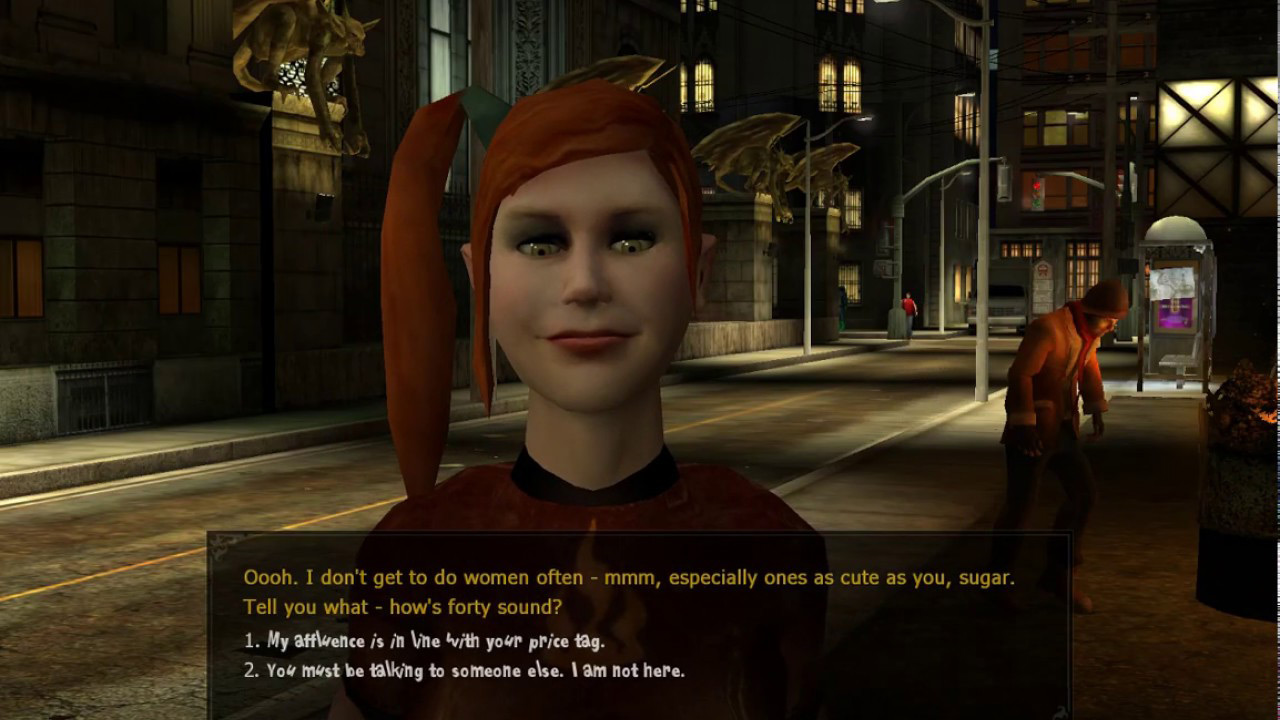 Bloodlines 2 has a lot to live up to, simply because a lot of what made the original so beloved despite all of its failings is less common in today’s gaming landscape. If Hardsuit Labs can harness that excellent writing and world-building, improve on the combat mechanics and release the game in a polished state (which I’m sure it’ll be able to accomplish), there’s no reason to doubt that we could see yet another franchise that we all thought was dead in the water come back to show the young bucks how it’s done.

[…] explained what Hardsuit Labs has to get right to ensure that Vampire: The Masquerade – Bloodlines 2 is a worthy […]

Reply
Vampire the Masquerade: Bloodlines Taught Taught Me That a Bad Game Can Still Stand the Test of Time - Doublejump June 10, 2020 - 7:06 pm

[…] Caving to peer pressure, I recently played through Vampire: the Masquerade — Bloodlines three times in the space of a week and a half in order to investigate exactly what was so good about it that critics were able to overlook its multitude of shortcomings. What I found, pretty quickly, is that Bloodlines is fundamentally broken, and in important ways: dialogue routinely breaks, the AI flips out mid-action, it’s extremely easy to get stuck on terrain, quests don’t start… and then there are the smaller bugs. Modern games that release in this sort of state find themselves consigned to obscurity and eventually abandoned, only ever brought up in conversation as a cautionary tale or the subject of ridicule. Bloodlines, however, managed to navigate all of its issues and gain enough of a following — even 16 years later — to warrant a AAA sequel, whose goals Ty dissected here on Doublejump last June.  […]

[…] Bloodlines’ case, blood is everything. We’ve spoken about Troika’s flawed masterpiece a couple of times here on Doublejump, but Zer0morph’s The Final Nights flips the game’s entire premise […]