The Castle that Hitoshi Built

Castlevania is influential, beloved and important — but who actually created it?

Who invented Castlevania? It sounds like a disarmingly simple question, but attempting to answer it will lead you down a wild rabbit hole of 1980s game development intrigue, fake names and mystery.
Before we get to the meat of it, though, here’s some background. Some of the more Metroidvania-inclined among you might say that Koji Igarashi is the obvious answer, but he only came into the series with 1997’s incomparable Symphony of the Night, but he had no involvement with the series prior to that. As such, while Igarashi certainly hammered home the classic Castlevania formula, his involvement has always been in service to the greater franchise.
In the 1980s, many Japanese studios used pseudonyms in an effort to prevent their best employees being poached away from them (and also, more cynically, to avoid giving them too much of a leg to stand on if they decided to protest the poor wages prevalent at the time). This led to many games being credited solely to the studio, but in the intervening years, most have been retroactively correctly attributed to the developers behind them. Some studios have recredited their games, in some cases developers have come forward to set the record straight, or the games have just ceased to matter in the public eye. Whatever happens, the cases get settled. Unfortunately, nobody has ever come forward to take credit for Castlevania, so while we have a name from some second-hand sources, nobody can know for sure whether it’s accurate.
Currently, the best guess and the world’s only lead is Hitoshi Akamatsu, a former developer for Konami. He is widely considered to be the creator of the Castlevania series, but has never personally come forward to claim any credit. Almost everything we know about his involvement with Castlevania’s development is second-hand, and it’s all only come out in the past decade or so. One of Akamatsu’s coworkers, Sonna Yuumi, chronicled the development of the original three games in a Twitter thread over four years, which Shmuplations.com has since translated and compiled. Yuumi apparently worked underneath Akamatsu at Konami, and posted recollections of the Castlevania development process and Hitoshi Akamatsu’s thinking behind the series.
The collection of tweets shows a devoted creator who strived to create a cinematic experience through games, someone who loved the classic Universal horror movies and Indiana Jones. It’s a colourful story and explains a lot about the series, but still gives us very little actual detail about the elusive creator. Konami, notably, has remained silent on the issue and refused to even acknowledge Akamatsu since his departure from the company, although the colleagues that have spoken about his work ethic and creative direction of the series seem reliable. For now, and until more evidence is revealed, we can only assume that Hitoshi Akamatsu is the chief creative mind behind Castlevania
This may be a satisfactory answer for some, but it actually brings us to another question: why is it that after historians attempted to track Akamatsu down, the man didn’t seem to actually exist? It’s not just that we lack information about his work on Castlevania: there is little record of him at all and almost no photos. All we know is that the only record available of his entire life is an interview with a short-lived magazine loosely translated as “Monthly Nan?da” — a magazine owned by Konami — that doesn’t discuss Castlevania at all. The interview is instead focused on the NES adaptation of The Goonies II, and makes mention of a 26-year-old (25 at Castlevania’s release) programmer named Hitoshi Akamatsu, with a handful of photos. It’s heartbreaking to consider that Konami still refuses to acknowledge the work Akamatsu did on one of its top-selling IPs — Castlevania now runs over 37 games, eight books and a Netflix series… all based on one man’s vision of a throwback to Universal horror movies. 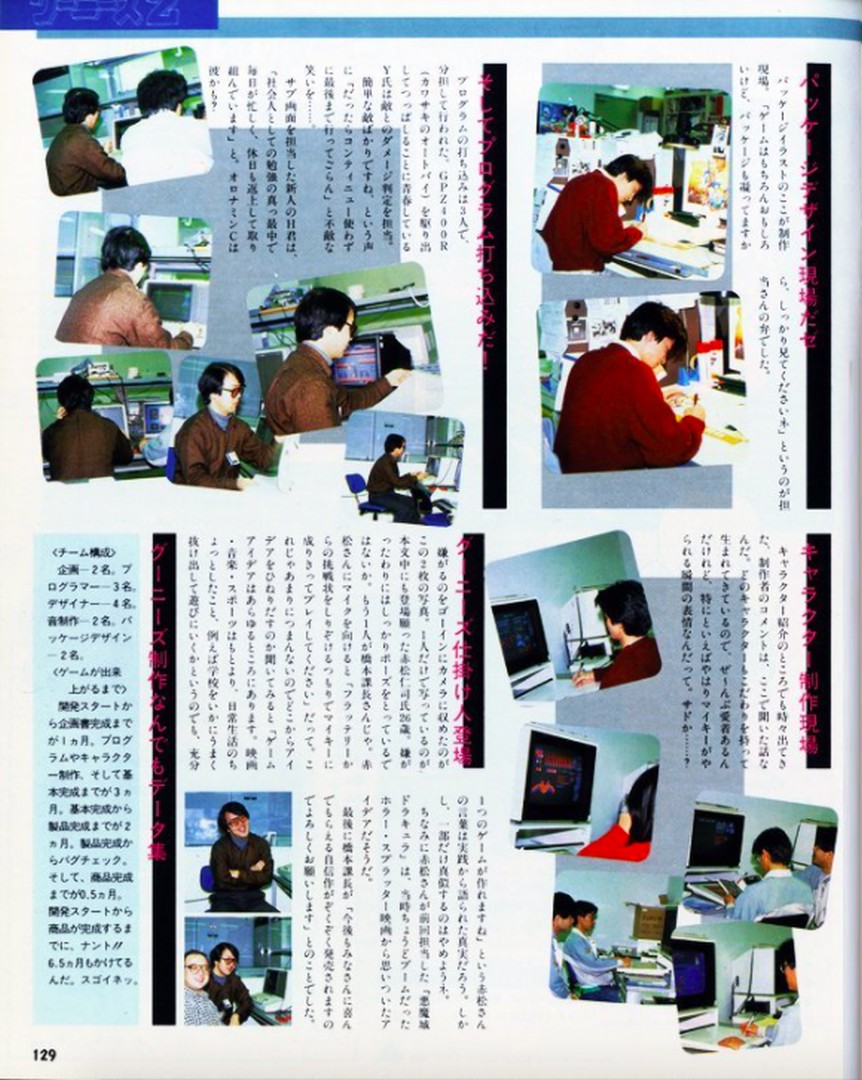 The only known image of Hitoshi Akamatsu. What dark knowledge lies behind those sunglasses?

Now that we know that Hitoshi Akamatsu — if that is his real name — existed, the final question is: where is he now? Is he living a quiet, humble life in a forest somewhere, completely off the grid? Is he languishing somewhere, trying to recapture the magic he created with the Castlevania series? Is he, in fact, Dracula, currently in development hell and waiting to return in a hundred years to create another franchise? Was he actually two children in a trenchcoat? (That one’s a long shot, but it’s going to look damn impressive if I end up being right).
Unfortunately, as much as I searched for any recent record of him, this story lacks a happy ending: Akamatsu has vanished, and he’s probably not coming back. The only satisfying conclusion to draw is that in just three games, he crafted such a captivating series with such enduring characters that it lives on 35 years later in a variety of media. If that’s his legacy, then I am confident that he can be pleased with that.
Hitoshi, wherever you are, thanks for Castlevania. Sorry you never got the credit you deserve.