“It’s just Tetris,” my girlfriend said after fifteen minutes with Tetris Effect: Connected. I reeled at the statement.

“Do you have eyes? Ears? Do you experience things?”

In much the same way Halo is just Pong but there’s pictures of guns on the screen, Tetris Effect: Connected is Tetris with some music playing, crafted by legendary rhythm game designer Tetsuya Mizuguchi. It’s also — for the right person, apparently — a shockingly emotional and involving experience surrounding the best version of one of the best puzzle games of all time.

Backing up a little bit: Tetris Effect: Connected is a re-release of 2018’s Tetris Effect, now with added multiplayer functionality and available in a few more places (those who already own the game will receive a free update coming in 2021). The original release was designed first and foremost for Playstation VR, and I will preface this by saying that the more immersive an experience you can make this for yourself, the more you’ll enjoy it. The game opens with a recommendation for headphones or surround sound, and I played with a lovely bias lighting setup almost exclusively in a dark room with the volume cranked. 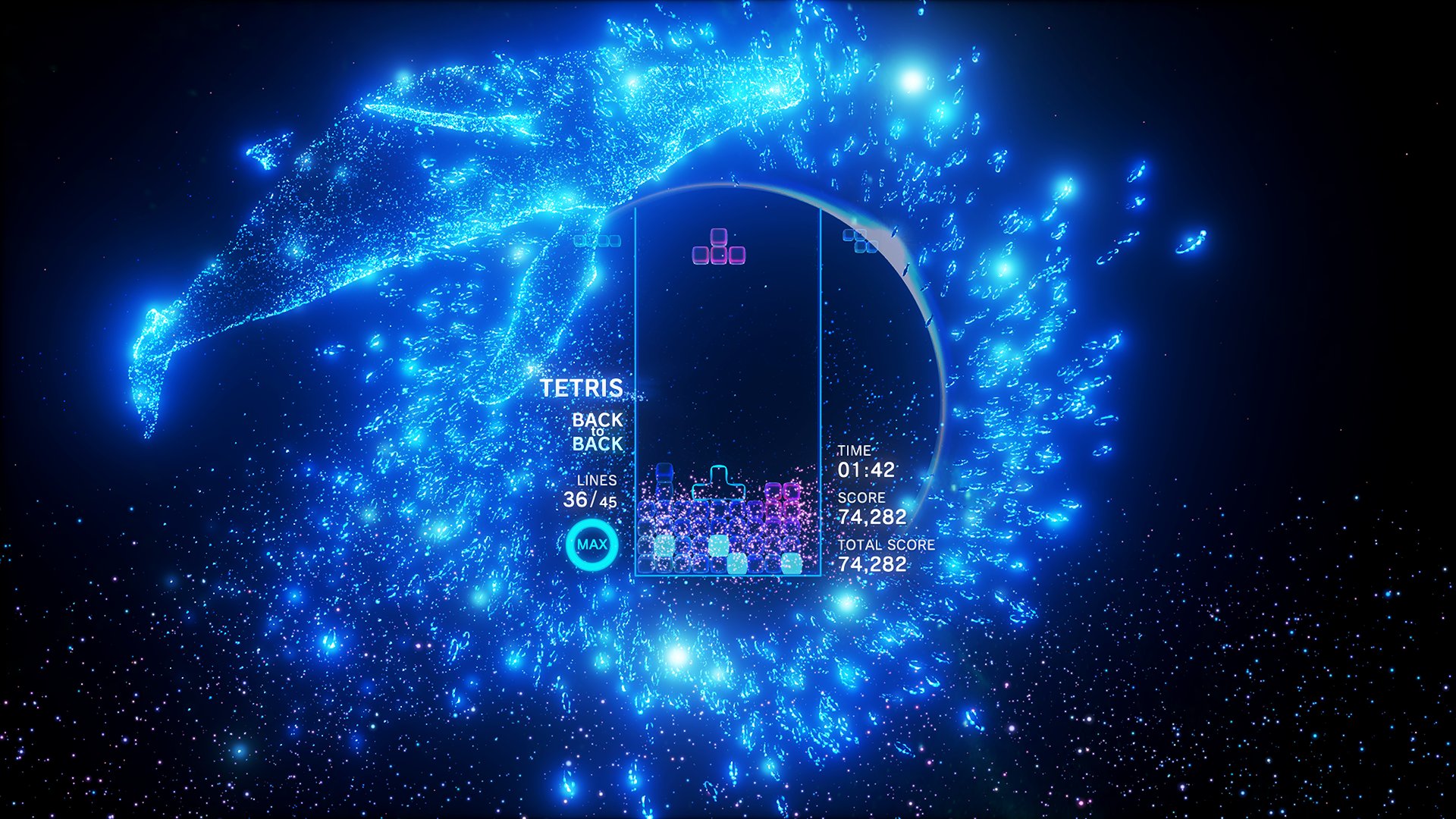 The reason you might want this for a Tetris game is that while at the core, you’re arranging falling blocks to make complete lines, Tetris Effect wants to make this the single most important thing you could ever do. Every movement, rotation and drop of a block, every clear of a line sparks a note or a drumbeat in the song and a visual flourish in the trippy, dynamic background. You’re creating music as much as you’re playing Tetris. As you play, you’ll find yourself bowing to unconscious forces: you’ll start playing to a rhythm; you’ll feel the euphoria of a crescendo as the blocks slow and you start pulling off line after line, the game celebrating your every move; you’ll feel tense and fearful as the music darkens and the tempo accelerates and you’re fighting for your life.

The visual experience only adds to this, with abstract collections of dots swirling around and turning feelings into settings as you progress through each level – never distracting, always enhancing. What turns this incredibly crafted immersion into emotion though is the content: you’re not just playing to a rhythm, you’re playing to a song. With vocals. With meaning. The opening track, Yours Forever – and what an introduction it is – acts as a sort of mission statement: we’re all connected. The journey takes you on a tour through cultures, places, times, always reinforcing the message that we can all understand and relate to one another through this simple little game. It wraps up with a track from the same singer as the opening: “What are you afraid of when I’m right here with you?”. You’re supported and you’re loved. Maybe it’s just this year making things hit a little different, but I cried at a Tetris game, and scanning the YouTube comments on the soundtrack I wanted to get a hold of, it looks like lots of other people did too. 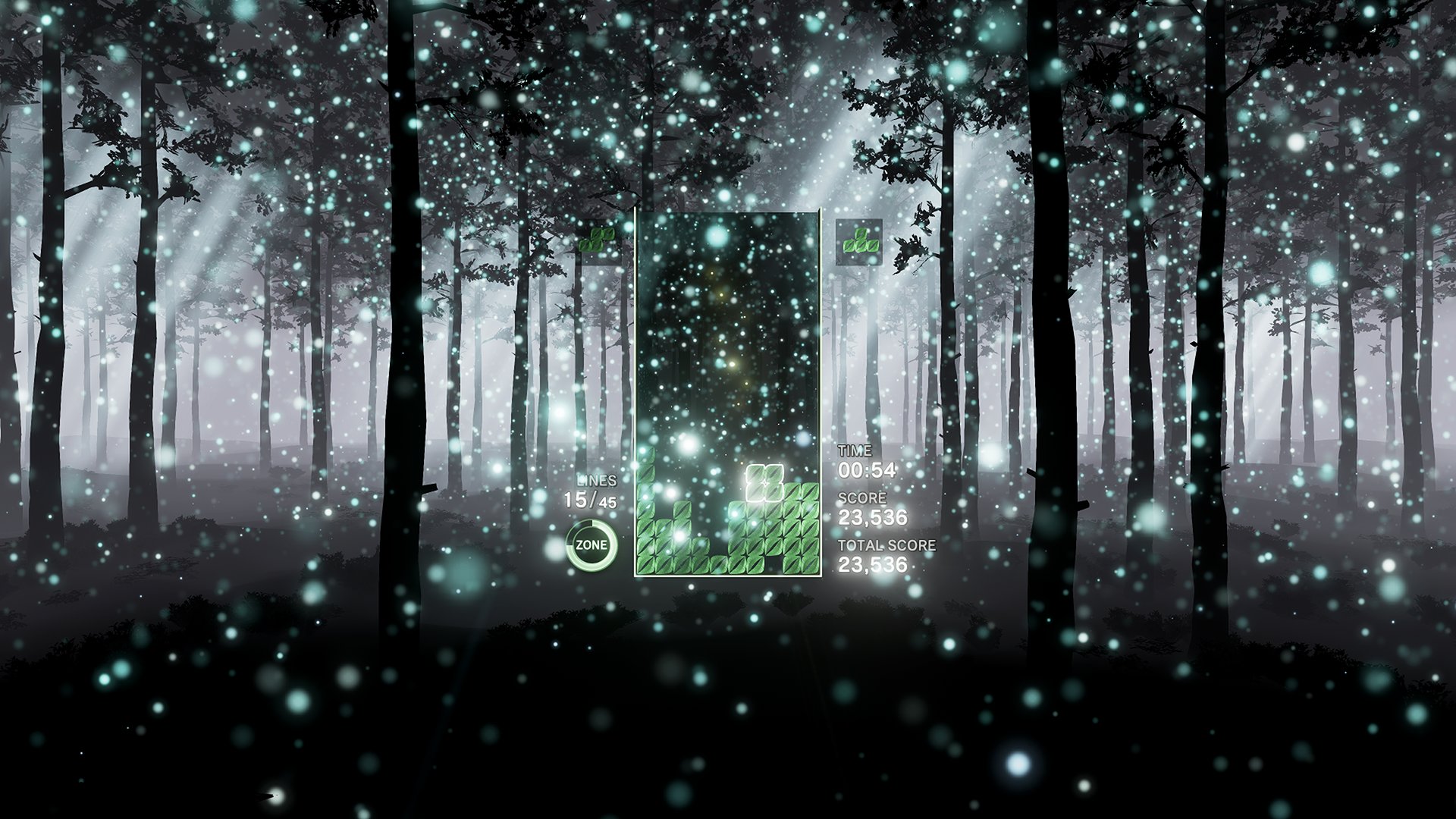 Apart from that, yeah, it’s just Tetris. It plays essentially like any modern entry in the series, complete with holds and forgiving rotation before a lock in place. There is a new gameplay gimmick though, and it’s very good: hitting a trigger after you’ve cleared some lines and the meter has built up enough will enter ‘Zone’ mode. Any line you clear in the limited time you have in Zone mode will head to the bottom of the stage before clearing, making it much easier to come back from near-hopeless situations. It also slows the pace down to a standstill so you can take a breather during more intense moments. For the highly competitive, Zone mode also challenges you to clear as many lines as you can: go for an Octotris, or a Dodecatris, or see if you can pull off clearing the entire board in one go for an Ultimatris. It’s a great addition, and although I was too distracted being a big crybaby to use it much in the main story mode I very much enjoyed it in some of the Effect modes, which give you your standard Marathon and Sprint game modes. There’s also more classic Tetris in here, which will please purists, and a good stable of single-player challenges. Given that you can complete the main story in just a couple of hours, this extra content is very welcome.

Tetris Effect: Connected does boast a new multiplayer feature, though, and it is very, very good. There’s standard competitive 1-on-1, but it’s the two more unique game modes that stand out to me: the first of these modes is co-op, where you and two other players must individually clear as many lines as possible while facing off against an AI boss whose matches will send disruptions to each of your boards. Once you clear enough lines, your three boards will merge into one and you’ll take turns placing pieces on an extra wide, triple-size board to make super-sized lines, with your combined performance deciding how much damage you’ll do to the boss. It really drives home the idea of the great, unifying Tetris. Apart from the slap-in-the-face symbolism of your boards literally connecting, you then have to communicate strategies and work out ideal piece placement with two other people, coming from anywhere in the world, with no language other than moving Tetris pieces around. Apart from being a great experiment though, it’s also really fun, and the later bosses are really damn hard. My only real complaint is that you’ll face a group of three bosses in quick succession, so matches can definitely run long — tackling the first (and easiest) six bosses of twelve total took around an hour and half.

A little more accessible but still great fun is the Zone battle mode. It’s a fairly straightforward competition to clear Zone lines, but given you need to clear actual lines to build up your Zone meter, it can be difficult to do it in bulk. You’ll need to formulate some clever strategies to balance building up your board for easy clearing in Zone, clearing enough lines to build the Zone meter and not putting yourself in an unwinnable position. It’s thrilling. There’s an entire levelling system and adventure on top of just playing multiplayer matches as well, and while I’ve been talking largely about matchmaking-driven online play, there’s options for lobbies with friends and even local play. Considering that the re-release is focused on multiplayer, it’s definitely got enough on offer to warrant doing so. This isn’t just Tetris Effect on more consoles, it’s Tetris Effect: Connected. Tetris Effect: Connected is the best game I’ve played this year and one of the best experiences I’ve had gaming, maybe ever. Any variation on Tetris would be the last game I would have expected to produce an emotional response, but here it is… and that’s on top of the enjoyable gameplay enhancements and synesthetic presentation. For fans of the original release, the multiplayer mode is big enough and good enough to warrant sinking some more hours in. I’m absolutely stunned by this game, but for some — and especially those playing it more casually, without the immersive accoutrements — I’m reluctantly willing to accept it may be just Tetris with some music playing. Go get an Oculus Quest 2 and come back.

The best version of one of the best puzzle games of all time. You owe it to yourself to play this one. It’s even better with immersive lighting or VR.

[…] fell in love with Tetris Effect: Connected, explaining that “you owe it to yourself” to play it in his […]