SUPERHOT: MIND CONTROL DELETE released last month to considerable fanfare, with a library of glowing reviews on Steam to go along with the sizeable peak active player count that was to be expected given that the SUPERHOT Team gave it out for free to anyone who owned the original game. Although the developer presents MIND CONTROL DELETE as the definitive way to experience SUPERHOT’s core mechanic, whereby time only moves when you move, there’s something about the way the game delivers that experience that unfortunately leaves much to be desired. 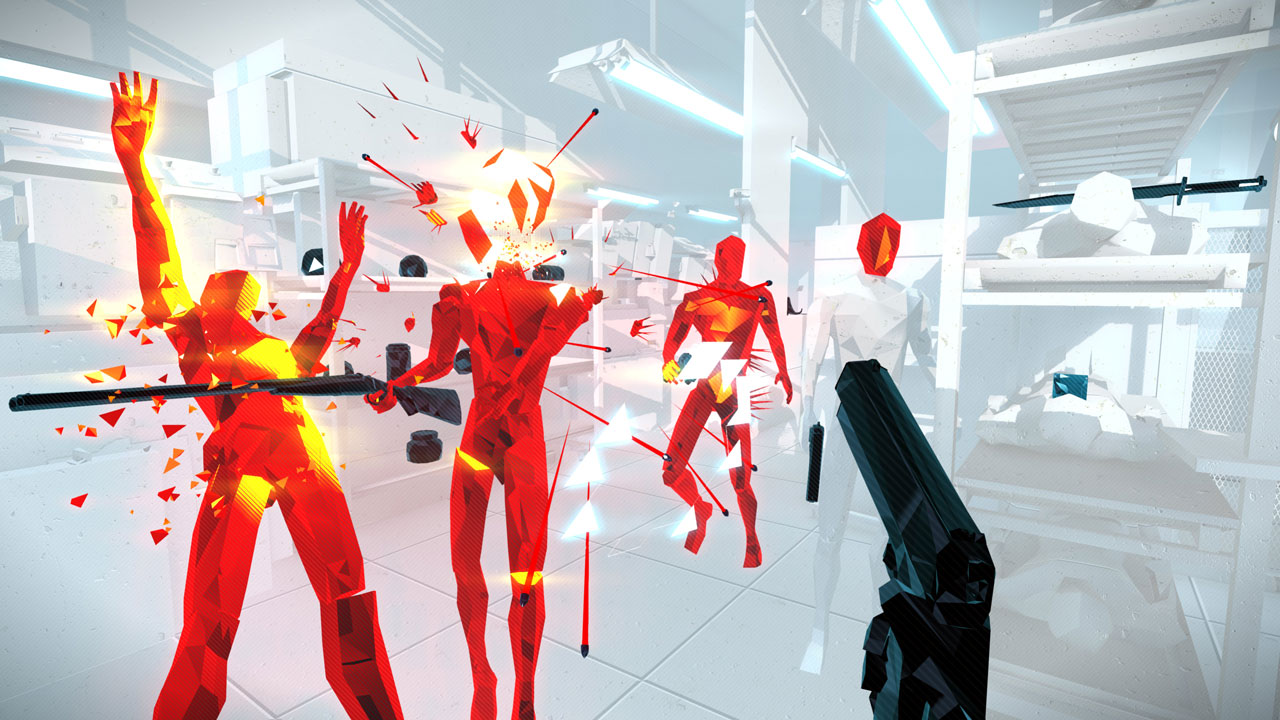 Using your time manipulation powers carefully is the key to getting through these levels unscathed.

SUPERHOT is about fighting through wave after wave of faceless red goons in a series of different maps using your time-manipulating abilities to stay one step ahead. Given that time only moves when you do, you’ve got plenty of time to calmly analyse the battlefield as you go, taking in each bullet’s trajectory and calculating the optimum path to take to avoid damage, dispatch your foes and watch as stray shots narrowly miss your head. It’s a combat puzzler with a time control gimmick, and MIND CONTROL DELETE doesn’t reinvent the wheel in that regard. The game is separated into a series of floors, each made up of a series of Nodes that you’ll have to complete sequentially in order to progress; each Node consists of anywhere between four and ten levels, which the game randomly generates by drawing from a woefully small number of maps, randomly allocating weapons, enemy types and spawns, and then throwing you right into the thick of it (which would be much, much more frustrating if you couldn’t just… stop time and get your bearings). It’s a step away from the original game’s meticulously crafted and curated levels, which played out like self-contained action movies — unfortunately, the limited pool of maps, enemies and weapons it draws from means that it’s ultimately a step backwards.

As a combat puzzler, SUPERHOT does very well to put all the power and tools in the hands of the player, pat them on the back and say “figure it out”. Alongside your ability to control time, you’ve also got a small number of weapons to choose from — anything from a lone turd found in a disco bathroom (I’m dead serious), to a wet fish found in a restaurant kitchen, all the way up to a fearsome katana and a rifle that fires railway spikes. Weapons fall into four different categories: you’ll find throwable weapons that’ll stun enemies, throwable weapons that’ll kill your enemies, mêlée weapons that’ll kill your enemies and your standard firearms. That will all sound pretty familiar if you’ve played SUPERHOT before; the major difference between MIND CONTROL DELETE and its predecessors is in the inclusion of Cores and Hacks.

Unlocked by completing specific levels, Cores are permanent upgrades that do anything from giving you an extra heart of health, to giving you the ability to HOTSwitch into an enemy’s body like in SUPERHOT. You can only equip one Core at a time at the beginning of a Node, and that core will stay with you throughout. Hacks, on the other hand, are less permanent upgrades — anything from increasing your movement speed, to putting more bullets in your firearms, to turning any thrown object into a bullet-spewing explosive — that you can choose from at the beginning of each level within a Node. The game selects a number of Hacks at random and presents them to you before you get started on a level; combined with the randomly-generated levels, this means that each and every visit to a Node plays out completely differently.

The Cores and Hacks are a fantastic, very welcome, effort to keep SUPERHOT: MIND CONTROL DELETE’s core gameplay loop from becoming stale, and it presents some incredibly fun scenarios. My personal favourite experience came when I combined CHARGE.core with berserk.hack, allowing me to zip around the level bashing enemies’ heads in with my bare fists with no regard for cover or obstacles since each kill rendered me invulnerable as I closed the gap between enemies quickly and set off a chain reaction of devastating, satisfying brutality. 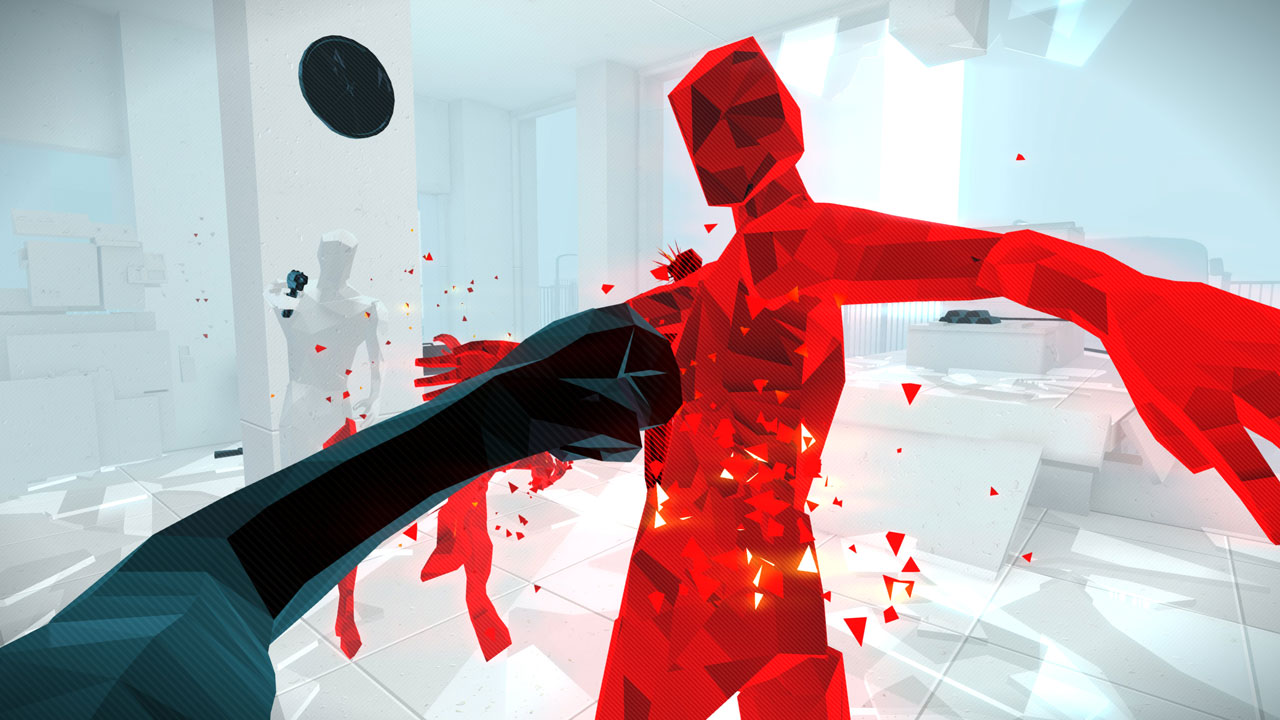 Guns are cool, but sometimes there’s nothing better than a good old fashioned beatdown…

What really let me down though, is how quickly SUPERHOT: MIND CONTROL DELETE exhausts the already shallow pool of variety in its gameplay. It’s more than likely that you’ll have seen every possible map and weapon the game has to offer after completing the first floor. Of course, Cores and Hacks create a bit more variety but the fact of the matter is that some of them are just better than the rest; given that dying means you’ll have to restart the entire Node, there’s not too much incentive to experiment when you know what the best combinations are and can save yourself the loss of 15 minutes by choosing the “right” ones all the time. Completing Nodes ended up feeling more like a relief than an achievement, and I eventually just burned out after around eight hours of play — there simply wasn’t enough substance to the game, so I felt like I was just doing the same thing, over and over again, for eight hours.

That’s not to say SUPERHOT: MIND CONTROL DELETE is a bad game — far from it. In fact, it’s a fine addition to the core SUPERHOT experience that’s just an update or two away from being a fantastic one. At this point, though, it’s a game that relies far too heavily on its time-manipulation gimmick to make itself less frustrating, rather than properly exploring the possibilities that it can bring to the table. If the SUPERHOT Team is able to add to the pool of enemies, maps and weapons that it chooses from, or even add in some of the carefully and intentionally crafted levels the original game was beloved for, it would be a huge boost to an already fun action-FPS experience.

SUPERHOT: MIND CONTROL DELETE is a fun action-FPS that feels limited in its execution; it makes some fantastic additions to the core SUPERHOT experience, but a poorly-executed step away from the original’s intentionally, meticulously crafted level design ultimately hurts the game’s replayability.