I won’t pretend to be hugely familiar with Franz Kafka or his famous novella The Metamorphosis, but I’m certain that this whimsical stroll through an insect-filled underworld is something he would be very appreciative of. Throughout my playthrough, I got the distinct impression that the game was made for philosophy and literature buffs, and in a time where the biggest games are all ostensibly the same thing, it’s refreshing to play something that isn’t trying to be the “next big thing”, but instead aims to be a relaxed, thoughtful interpretation of our own culture.

Despite being named after Kafka’s 1915 magnum opus, Metamorphosis does more than just reimagine the story into video game format; it’s more of a tribute to some of Kafka’s best-known works. As in The Metamorphosis, players assume the role of Gregor Samsa, who awakens one day to find himself turned into an insect. Gregor embarks on a journey not only to find a way to regain his humanity, and to help his friend, Josef K. — the protagonist from Kafka’s 1925 novel The Trial — defend himself from the false charges brought against him. Along the way, Samsa will re-learn how to traverse the environment and make use of his arthropodic abilities to traverse massive, fantastical levels, and he’ll uncover the secrets of a huge, underground insect society that revolves around the ruling organisation known as Tower (a reference to 1926’s The Castle).

Some might find themselves classifying Metamorphosis as a “walking simulator”, given that you progress through it by travelling from one locale to the next, but there’s enough to keep you busy along the way that it’s much more than just a few hours of holding down the W key. It’s plain to see that Metamorphosis is a passion project for the 17 people under the Ovid Works banner; those familiar with Kafka’s body work will find themselves impressed by the way the Warsaw, Poland-based developer has seamlessly incorporated three of his stories into one experience — even though it’s only three hours long — and those who enjoy a well-designed video game will be impressed by the attention to detail that’s present in Metamorphosis’ characters and environments. 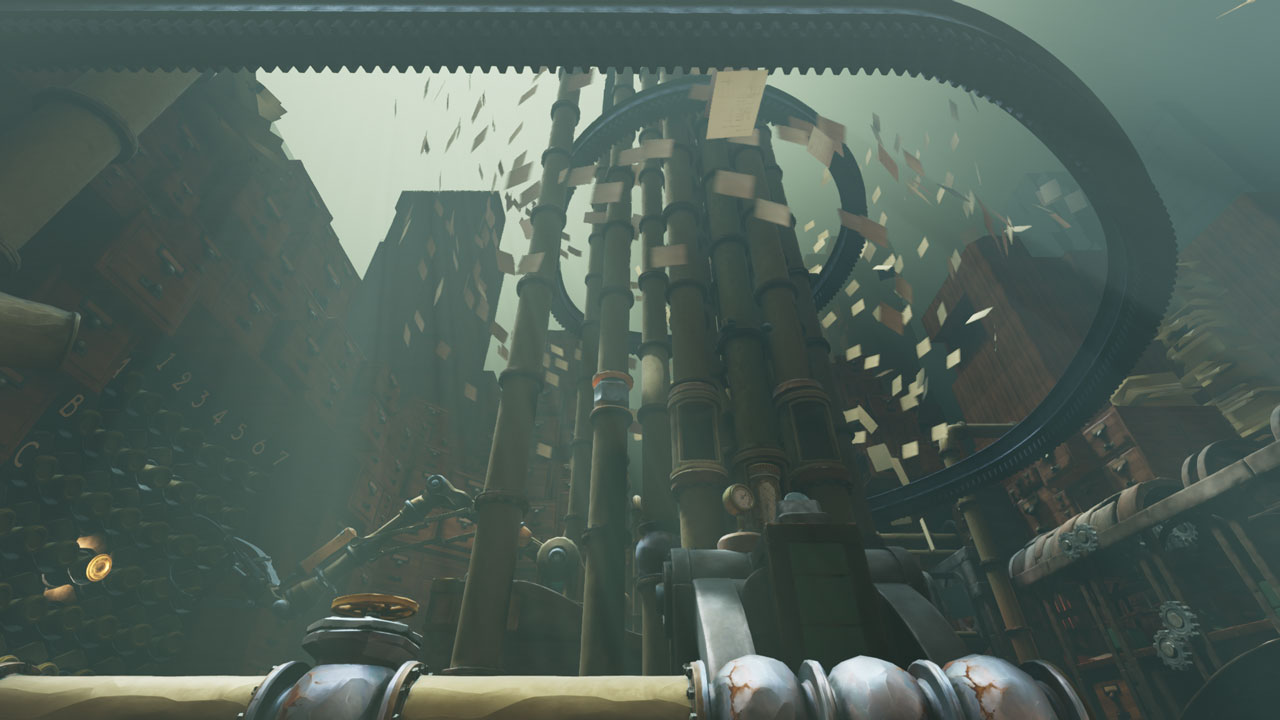 As noted, Metamorphosis’ gameplay consists primarily of walking from one destination to the other, although there are puzzles and side quests littered throughout your path. At one point, I was asked to navigate Josef’s lawyer’s desk in order to find the certificate that would grant me entrance to the Tower; along the way, another bug pleaded with me to climb a lamp and talk his friend down from jumping. Once I found what I was looking for on the lawyer’s desk, having completed that little side-quest, the game also gave me the opportunity to look for Josef’s court date hidden among the documents on the desk and communicate it to my friend. There’s a deceptive amount of gameplay in Metamorphosis, but you’ll only find it if you investigate every nook and cranny, and talk to every bug you pass on your journey.

The game introduces you to your ability to stick to surfaces — by walking over a sticky liquid like honey beforehand — very early on, which you’ll then utilise to freely traverse the environment or to solve puzzles. You can also use this ability to change the environment around you; one puzzle required me to fix a broken wire in a machine, which I accomplished by smearing honey all over the wires so they stuck back together. With that being said, the game doesn’t direct you as to how you can solve the puzzles. Instead, it scatters all the clues you’ll need before you and encourages you to explore and try to find the solution yourself. Some of these puzzles are far too easy, though, and the ability to stick to surfaces is the only ability you get that you wouldn’t have had if you were human. I would have liked to see some more abilities available, which would have allowed Ovid Works to create more challenging puzzles that required you to master more mechanics than just one.

I’ve always appreciated a game that can tell its story through environments, and that’s something that Ovid Works has managed to execute to great effect. As you’re making your way through various machines and environments, you’ll surely find yourself wondering who built them, where they came from and what their purposes are — it’s a rather philosophical experience, much like the stories it’s retelling. On top of that, Ovid Works has given these somewhat-dreary stories new life, with a beautiful aesthetic throughout Metamorphosis that complements the game’s mysterious atmosphere perfectly. The mixture of damp underground and peculiarly industrial settings that make up the insect underworld are ingenious, and loaded with detail; my personal favourite is the insect bar constructed entirely within a phonograph, complete with the sleazy “Boss” character reclining in a hot tub. It’s truly a brilliantly-constructed game — one that Ovid Works has every reason to be proud of. 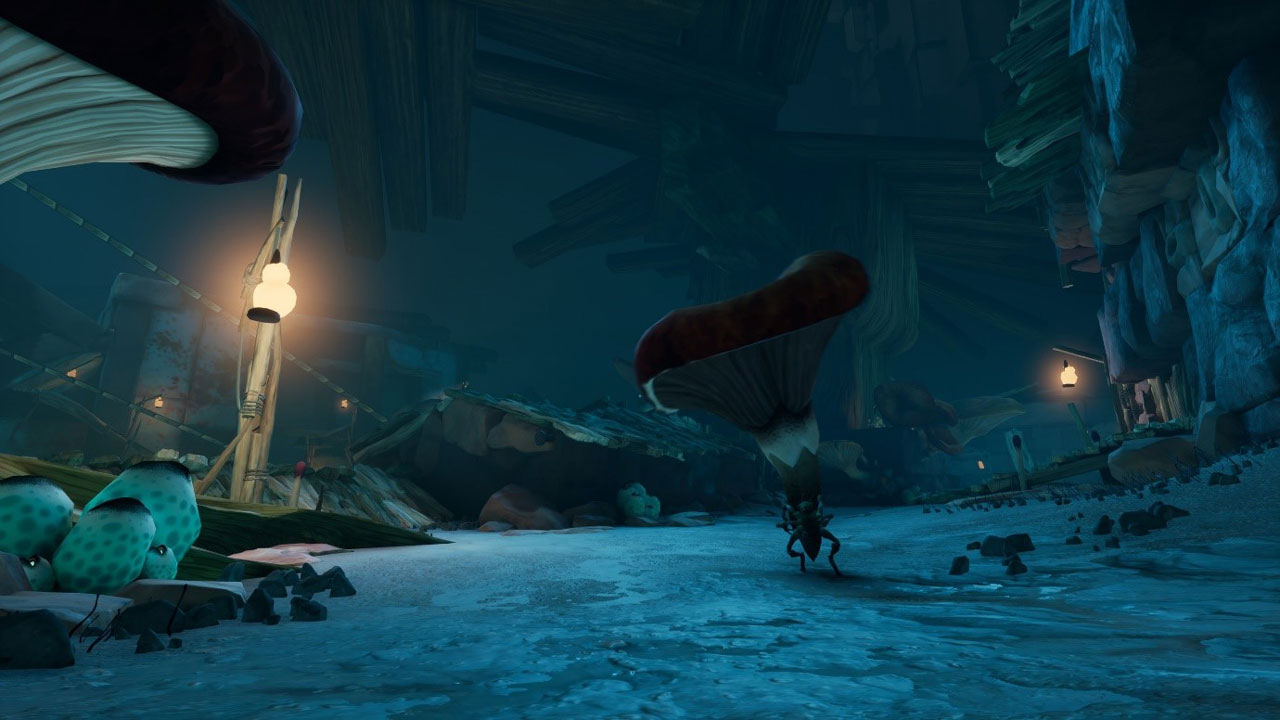 This surreal journey isn’t without its drawbacks, though, with my chief complaint being that as soon as I was really hooked, the game just… ended. My playthrough of Metamorphosis clocked in at around four hours, and that was a playthrough where I looked to find everything possible — that’s disappointingly short, especially considering that Ovid Works is selling the game for $35 on Steam, even on sale. Without spoiling anything, I found both of the endings extremely abrupt: I was intrigued to find out what was going to happen to Gregor and Josef, and what was next for the little bug society, but nothing happened. That’s one of the drawbacks of telling three stories in one; there were enough unfulfilled plot points to fill a season of Game of Thrones and it left me feeling rather unsatisfied, especially given that I really enjoyed everything that it has to offer.

Those quarrels aside, Metamorphosis is a splendidly well-done game from a studio that has once again proven its dedication to marrying interesting, entertaining storytelling with solid gameplay and attention to detail. It does lack in some of the areas it should be best in, so it doesn’t quite fulfil its lofty potential, but it does very well with what it has and it’s sure to impress anyone who is interested in Franz Kafka’s iconic works.

As a retelling of three of Franz Kafka’s best-known works, Metamorphosis has a lot to live up to and it does so quite well. It will leave you wanting a little more after your playthrough, but the gameplay, visuals and genuine attention to detail are extremely impressive nonetheless.