Wolves, the fifth and final episode of Life is Strange 2, is the season at its most relaxed and reflective. It naturally leads into the type of dramatic climactic conclusion like you would expect it to after Sean and Daniel’s cross-country escape to Mexico, but it’s still a rather sombre few hours.

Where Episode 4 was the exciting rescue mission from a crazed preacher that drove Sean to his lowest point, Episode 5 is where you look back on what you’ve achieved so far. It dwells on Sean and Daniel’s bond, how it has strengthened throughout all the hardship and trauma and how valuable that experience and growth has been, especially to Daniel. By doing so, Wolves prepares you for the final stretch to the US-Mexico border wall and the difficult choices you’ll face when you get there. 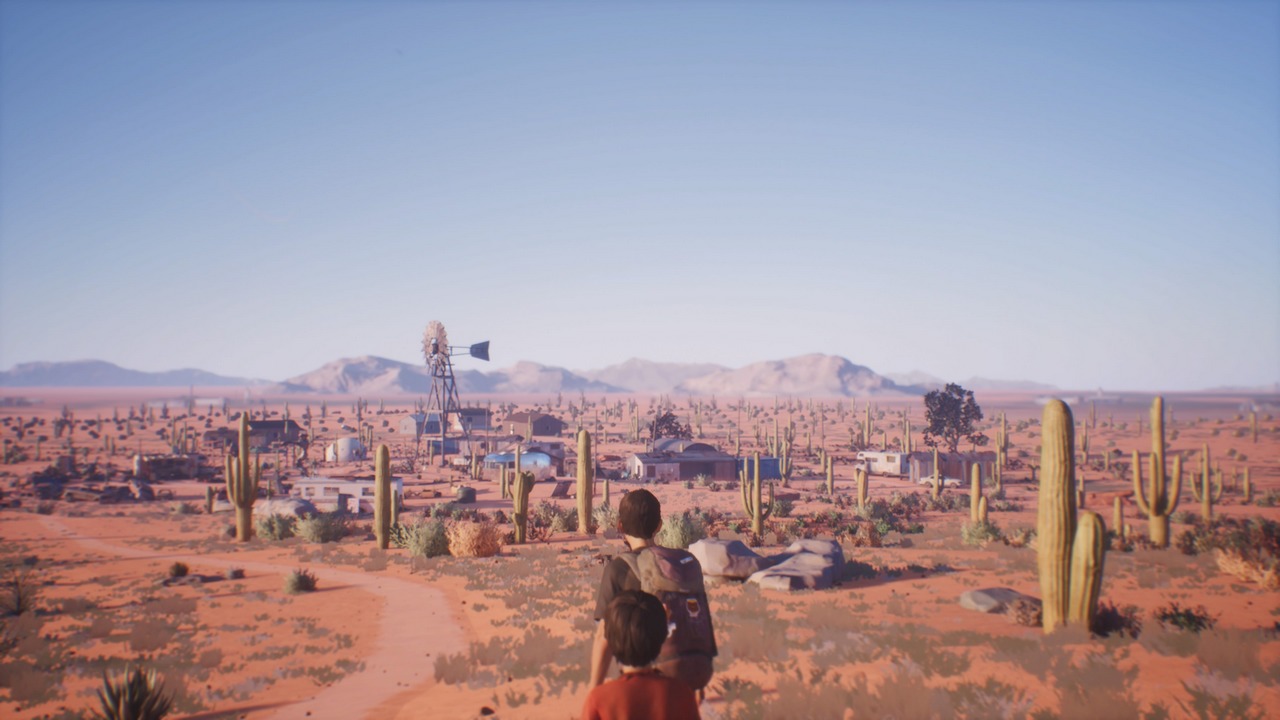 Hiding out for almost two months with their estranged mother Karen, Wolves finds Sean and Daniel living the best they’ve had since the start of the season in the small reclusive community called “Away”. It’s a tight-knit makeshift family made up of people fed up with mainstream society, now living in a peaceful, accepting and self-sufficient community somewhere in the Arizona desert. Daniel spends his time connecting with the mother he never knew and helping Joan, an artist and Karen’s BFF, construct giant metal artworks with the powers he doesn’t need to hide. Sean takes a breath and spends time with both Daniel and Karen without any sort of immediate danger looming over him and lets his injured eye recover. “Away” even includes Chloe’s step-dad David from the first game, who’s managed to grow and heal in the years since whichever conclusion you chose for Arcadia Bay.

However you play, Life is Strange 2 ends with a satisfying and suitably bittersweet conclusion. None of the closing epilogues are actively cynical or depressing but they have the edge and gravitas needed to stay authentic to the story and its characters. They elegantly summarise the years after Wolves while also hinting at the depth of change and growth that Sean and Daniel experienced.

Wolves closes out the season with aplomb and rounds out the journey and bond between Sean and Daniel almost perfectly, but in those painful final moments, as the brothers’ relationship is definitively resolved or concluded in one way or another, Episode 5 also highlights why Life is Strange 2 didn’t earn the sort of attention the first enjoyed. 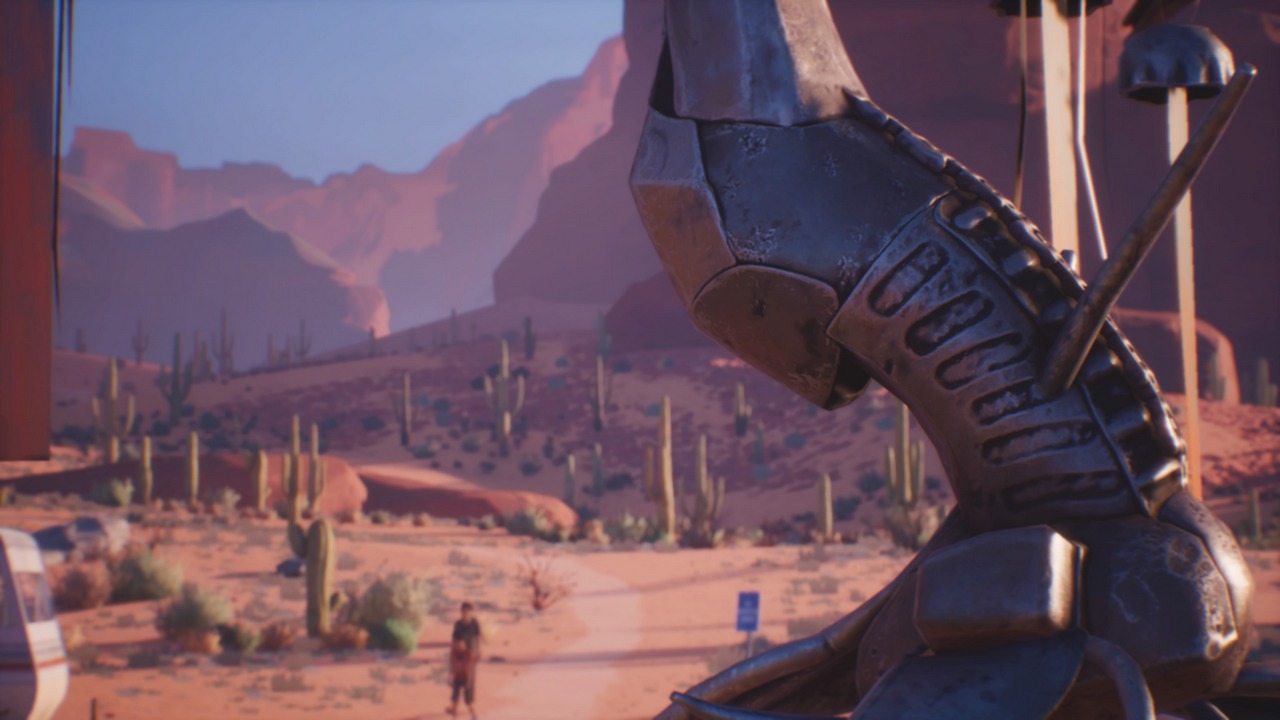 By subverting the original in almost every way, Dontnod might have crafted a masterful B-side to the first game but it clearly wasn’t the sequel that fans wanted or expected.

Protagonist Sean isn’t the endearing quirky outcast but is more of a typical skater kid; neither him or his younger brother Daniel (as great as they are) were ever going to compete with Max and Chloe on the same terms; there’s no central location but instead entirely new settings every episode; romance is a small and largely extraneous part of their story; and it has a strong but fickle supporting cast, with none of them appearing in more than two or three episodes.

Even though Dontnod clearly steered away from the first game to let the sequel stand on its own feet, to not rely on or compete with the success or quality of the first, it’s unavoidable as a numbered sequel. It shifted away from an endearing high school maybe-romance to a more confronting and grim drama exploring a sibling relationship, one concerned with building tension and raw heartbreak in every episode, so this sort of drop-off is pretty obvious in hindsight.

That doesn’t mean the new season wasn’t successful, though. In fact, Life is Strange 2 might even surpass the original. 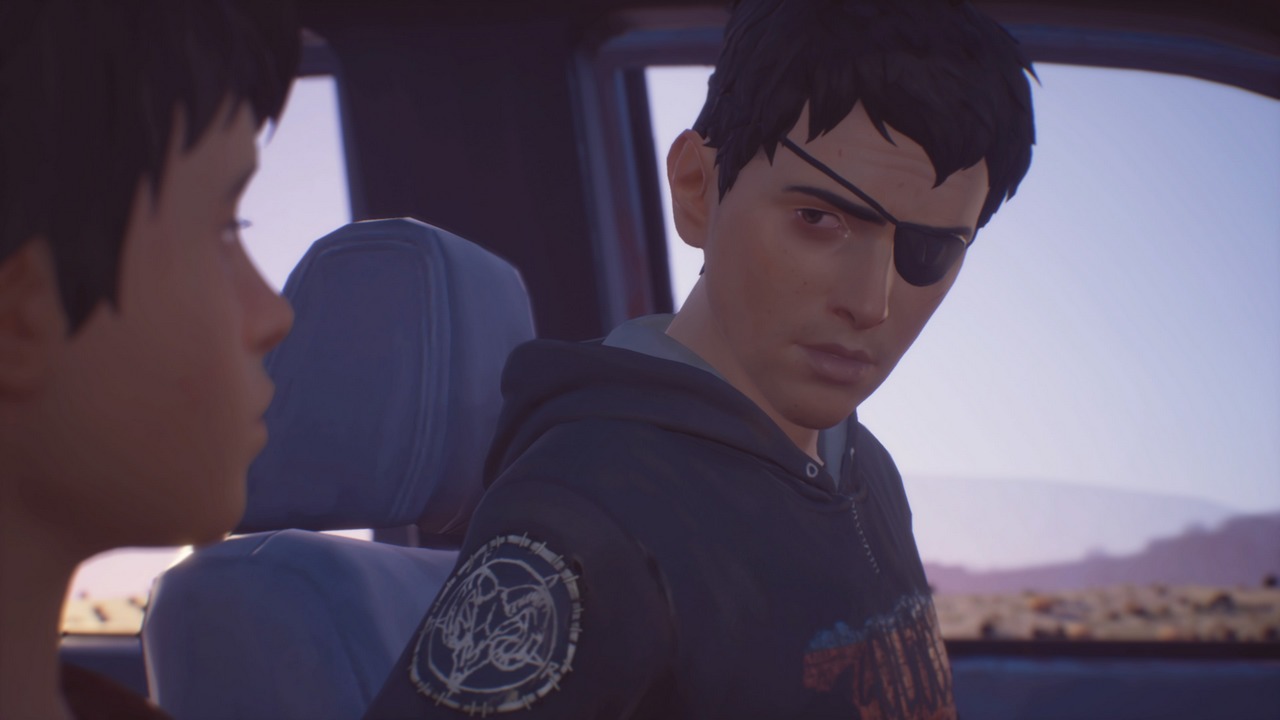 For one, Sean is more of a dramatic character than a likeable, charming YA protagonist. He’s stressed out, prickly and naturally selfish, and the choices he (the player) can make are hemmed in by this nature; your choices can occasionally seem limited or irrational but are definitely true to the teenage Sean. He isn’t very endearing, he’s mostly defined by his bond with Daniel and can’t quite stand on his own as a character, but he almost exactly captures the experience of being and acting as a teen big brother.

I’m sure there are people reading this that were far better siblings than I was but for myself, Life is Strange 2 was incredibly cathartic in how it taps into that combination of deep-seated insecurity, emotional distance and genuine affection. It’s a bond that can be tough to process until you’re suddenly forced to, when the weight and significance of the role is made obvious. In my eyes, Sean captures this volatile dynamic perfectly.

After finishing up the final episode, I’m really curious to know just how Daniel works and functions as a character based off of your interactions with him. It seems like he works on a sort of moral barometer, or that certain actions as Sean influence certain choices made by Daniel – either way, Daniel felt very natural and accurate to my experience with him. He doesn’t come off as being purely defined by my interactions with him but instead seems genuinely reactive and influenced by Sean; Daniel doesn’t feel “controlled” by myself as the player (even if that’s absolutely the case). The way Dontnod maintains this fragile illusion is truly impressive, especially as it’s the most ambitious part of the game.

Then there’s the central superpower of the season, Daniel’s telekinesis. It’s another subversive change where you aren’t the one with superpowers this time ­– your younger brother is. On top of that, not only are you very literally powerless, you’re also saddled with responsibility and inundated with difficult choices by needing to take care of and raise your younger brother. The only thing that could be called a “power” in Life is Strange 2 is your bond with and influence on Daniel, which doubles as a source of stress and difficulty in its own right.

The sequel might not be as outwardly “fun” as the original but it wields this ironic power dynamic as a fantastic dramatic hook, as a foundation to explore the brothers’ bond with incredible nuance. 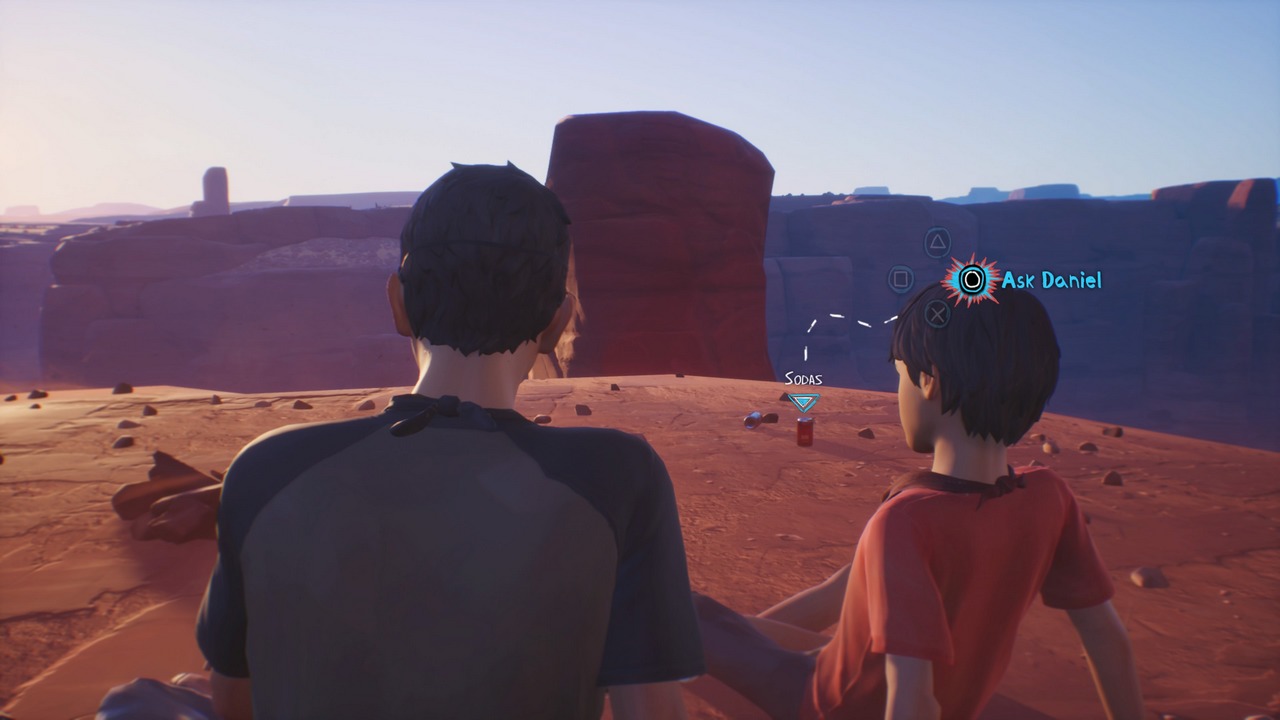 The original Life is Strange weaved its central superpower phenomenally throughout the season and its story. The ability to rewind and make your decisions again at almost any point in the game wasn’t just refreshing for the interactive drama genre at the time, using this “God Mode” to stress how impactful and meaningful your final individual choices are, but it even worked as a metatextual deconstruction of choice in interactive dramas and video games in general.

Through the deliberate absence of power, Life is Strange 2 does something similar. It subverts the nature of choice and decision-making not through freedom of choice but through a paralysing sense of consequence.

Now, choice is transformed into something heavy and destructive. Whether it’s through the potential impact on Daniel’s physical or emotional wellbeing, the safety of others, the brothers’ safety from the law or some other danger, every decision feels far more impactful than you wish it did. As Sean, your dedication to Daniel as both guardian and role model adds layers of difficulty and frustration to every choice you make. It feels awful, and that’s the point.

While this is hardly a bad thing – for the player to really care about the decisions they make – the trade-off is that it can be really paralysing to make almost any choice, especially when you’re confronted with a choice you think would suit Sean or Daniel as characters better than the cold and “sensible” one. Life is Strange 2 makes it harder to make these emotionally-driven choices because of those added layers; it’s like you’re playing two characters at once by needing to think of both Sean and Daniel in the short- and long-term, both physically and mentally. As someone who is already not great at making decisions in games, this can sometimes hurt the flow of the story if you’re the same. Life is Strange 2 alienates a lot of its original audience but I admire Dontnod for moving away from the typical young adult tropes that the first game relied on and telling the story they wanted to tell. For better or worse (for certain players), Dontnod told a tragedy instead.

As a tragedy, Life is Strange 2 weaponises your sense of choice. It weaponises your responsibility to Daniel. It plays on your natural distrust as a guardian, a minor and a Latino person in MAGA America. It even weaponises the encroaching end of every episode: you know the episode will end soon and you know there’s going to be something dramatic and heartbreaking to push the story to the next episode, and you have to keep playing anyway. It’s like an emotional horror game occasionally heightened by the awful reality of present-day bigotry.

Even the game’s darker endings do a fantastic job of leaning into the inherent tragedy of Sean and Daniel’s dilemma. They balance out whatever you earn from your choices with the necessary pain and sacrifice that comes with it, where even the “good” endings are suffused with pain and heartbreak in its closing scenes. Everyone naturally has their own opinion on the end of any story but, at the very least, Life is Strange 2 keeps in line with the sacrificial do-or-don’t finale of the original. 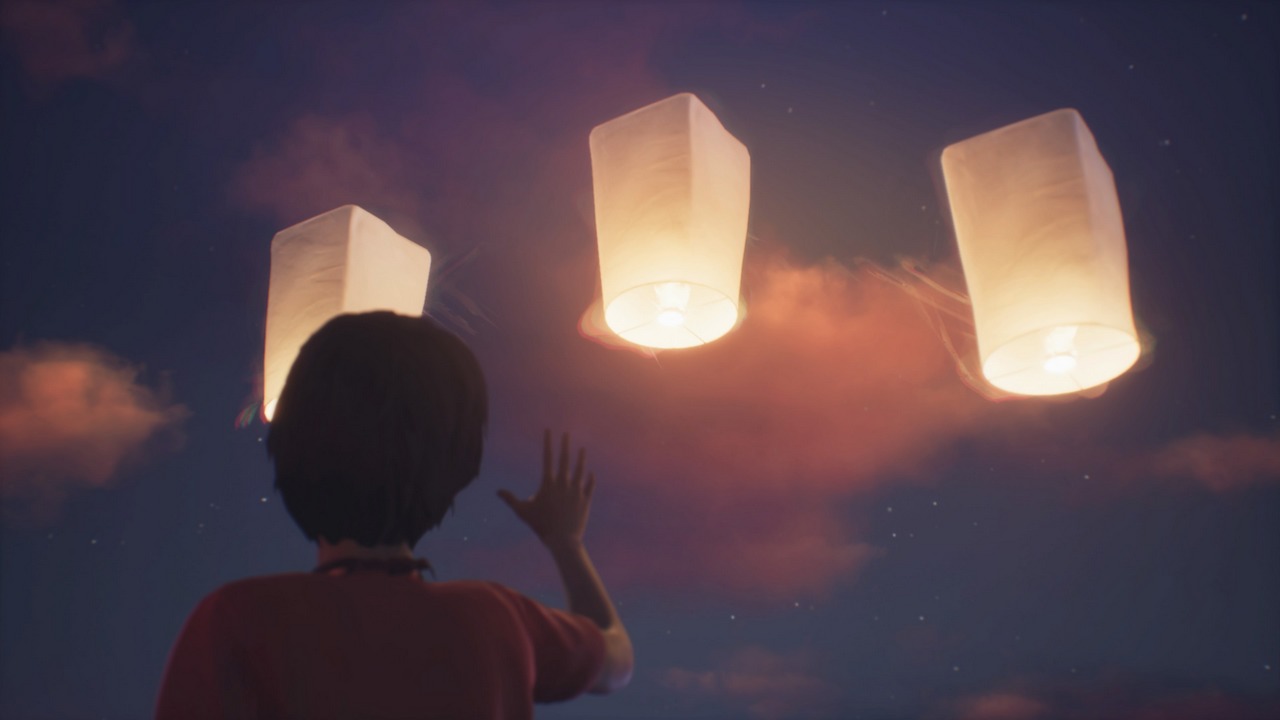 Life is Strange 2 ends Sean and Daniel’s journey to Puerto Lobos the same way it started: as a polarising, subversive sequel dedicated to telling its own powerful tale instead of just falling back onto what made the first game so popular. It may not be quite what fans wanted but Dontnod’s second season absolutely lives up to the original in its own way.

(I really wish there was more Lyla, though.)