A modern take on arcade classic Defender, Jetboard Joust wears its inspiration proudly. It’s a 2D side-scrolling action game where you control a small spaceship – in this case, Super Jetboy riding a jetboard – across a cyclical level, using the radar at the top of the screen to race around and prevent land-bound “babies” from being abducted by flying aliens. It does make a few key changes to the Defender formula, though. 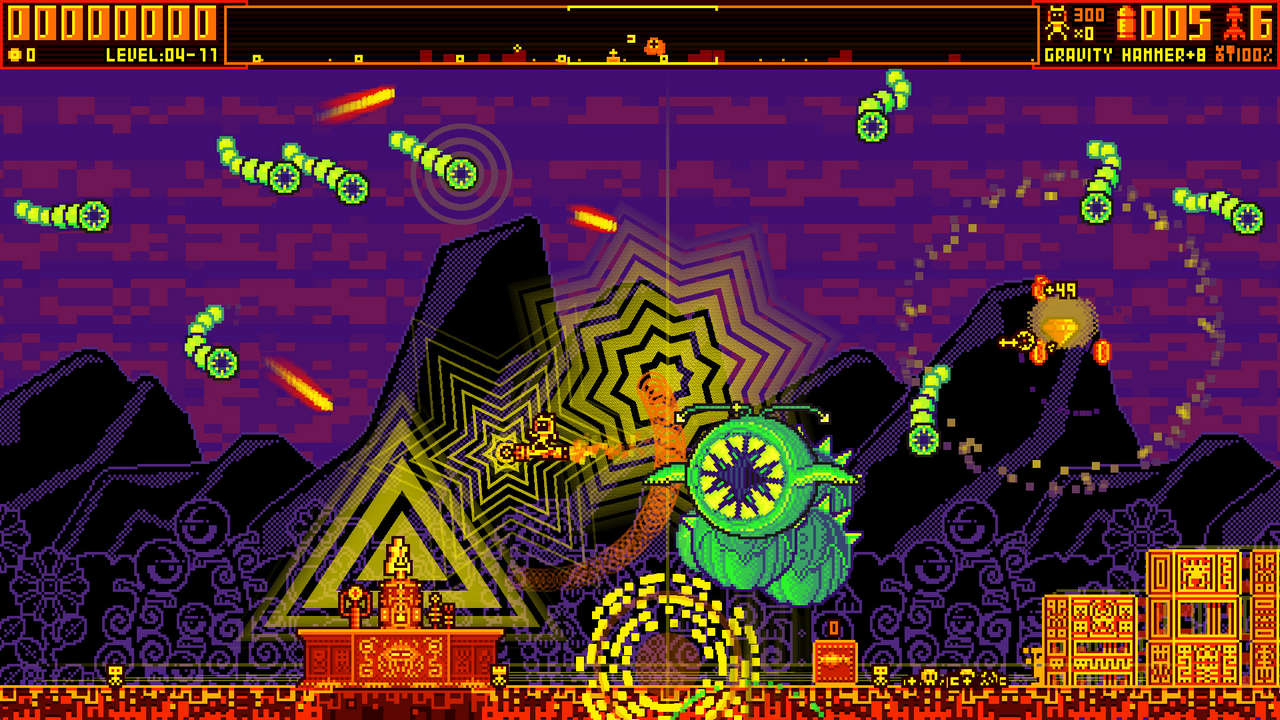 First off, Jetboard Joust has a ton of weapons to use. Carrying one at a time alongside your dinky infinite-ammo pistol, each weapon fills a role. The laser rifle is an all-rounder aimed at wrecking weaker foes, the RPG is a low-ammo high-damage explosive for dealing with crowds, stuff like that – so you want a handful to juggle between. You fly between weapon pickups strewn across every level (not new weapons, only the ones you currently own) and try to balance your use of each one, keeping an eye on both their ammo count and durability.

Second, Jetboard Joust is pretty long. Set across five individual worlds of 11 levels each (ten normal levels plus an extra level with a boss), a full beginning-to-end run takes a few hours at best. My first playthrough, where I died half a dozen times and had to replay levels, took somewhere between four and five hours overall. There’s no real incentive to rush through the game, either. While my playtime is probably on the longer side, it’s obvious that a single playthrough of Jetboard Joust aims to be satisfying and fulfilling in its own right. That you can play through to the end, beat the final boss and feel you got your money’s worth.

This Defender-like isn’t very hard, either, though this works for the longer runtime. Instead, Jetboard Joust’s difficulty lies in your endurance and long-term item management — which is rewarding in its own way, but lacks those exciting peaks and valleys you want. It’s about building out your loadout and managing your equipment, and earning as much cash as you can to continue these two things. Aside from the bosses (which are fun to learn and take down, if also a little easy), Jetboard Joust is a gradual ascent in both excitement and difficulty. 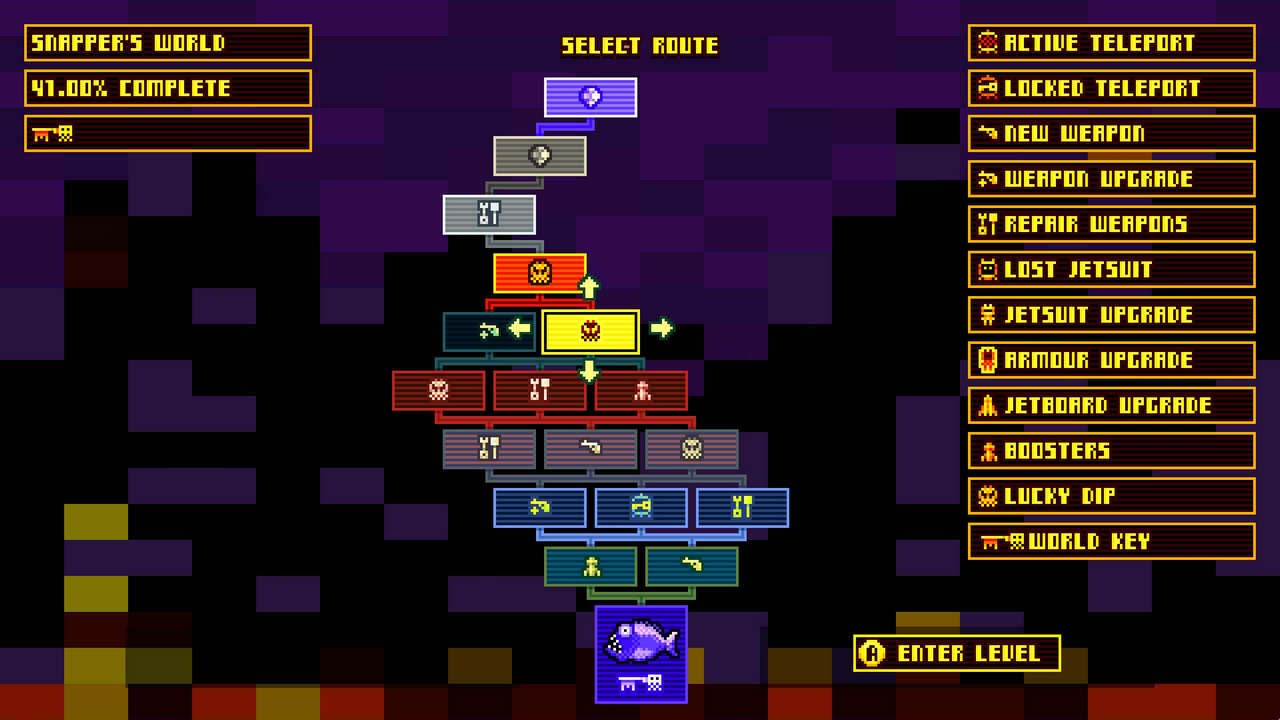 At first, Jetboard Joust feels like a roguelike. Levels and enemy encounters are procedurally generated (even the Game Boy-style colour palette is swapped out every level), and you can spend cash to upgrade and/or repair your equipment between levels. You choose your route through each planet depending on what rewards you want, which lets you style your own “build” (of a sort).

That said, Jetboard Joust also really values your time, which made it feel less like a roguelike. Spend money on a respawn, or jump back to a level or two ago, or jump all the way back to the start and rebuild your loadout from scratch? Jetboard Joust gives you options to play how you like, to not feel like you have to play the entire game over again unless you really want to. It’s sort of an arcade-hybrid in this way: you can treat it as an arcade or roguelike game and start over when you die, or you can treat it as a shooter with checkpoints and just focus on getting to the end. Win-win.

When you die, you also leave behind a Souls-style cash-stuffed jetsuit (read: corpse) that you can pick up on your next run. This gives you a couple more options: spend the money to respawn and keep your current loadout, or gamble on a new run and new equipment with a cash influx on the way? A new run means new weapons, too — another gamble, regardless of where you spawn. Restart at the beginning and rebuild your loadout, or take a chance on the randomised level-appropriate kit you get by respawning at a nearby teleporter?

In Jetboard Joust, death incurs both punishment and opportunity. On top of adding some strategy to the otherwise arcade-y game flow, these options help keep the game more approachable and painless for those who aren’t up for a tough hours-long Defender gauntlet. Weapons drop in durability the more they’re used. The higher durability they have, the more likely they are to spawn ammo drops. Cash can be used to upgrade weapons but this also repairs them, so it could be worth waiting to upgrade later instead. If a weapon’s durability is too low, you have to spend cash to repair them first before they can be upgraded again. Emergency suits (extra lives that are only purchasable upon death) cost more with every death and planet completed. Weapons can be sold for a quick boost of cash or to clear space and make sure that an end-of-level randomised weapon upgrade will hit a gun you actually use.

This all adds to the hectic flow of the game, but this web of interconnected mechanics also hurts the straightforward nature of its Defender-flavoured core. By piling on this extra busywork, Jetboard Joust drifts away from its inspiration and spreads itself thin. The steady growth of your weaponry becomes the “star” of the show instead of the tension of trying to keep every “baby” on the planet’s surface safe for as long as you need to. 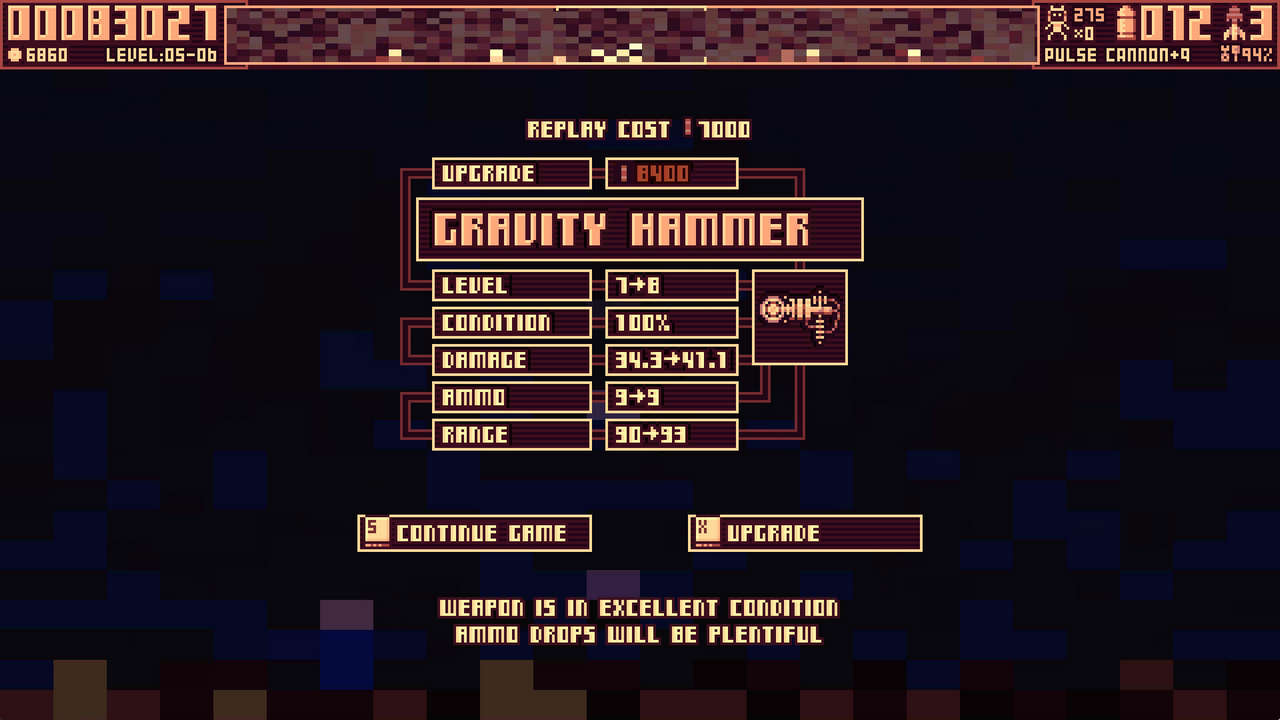 While rescues aren’t unimportant in Jetboard Joust, they’re hardly central either. You double the amount of cash you earn from beating a level if you keep every baby safe (which sounds like a lot of cash, but it’s not), and enemies upgrade into spongier enemies when they successfully reach the top of the screen and abduct someone (which is more tedious than dreadful). Neither of these things command the game flow in the way that the astronauts do in the source material, though, partly because it’s very easy to keep all ten babies safe during a level of Jetboard Joust.

Some players might love this lack of VIPs to take care of and the focus on combat instead – and it’s fun, I’m not saying it isn’t! – but it’s also a very flat gameplay experience. Rather than the rush of fast, efficient play to achieve high scores, Jetboard Joust is about the slow climb to greater strengths, about taking down a variety of enemies and bosses. It’s about the plate spinning of combat to keep yourself stocked and healthy across its lengthy run, which lacks the urgency that makes Defender so timeless.

It doesn’t help that the titular “joust” mechanic – where you blast forward like a battering ram, deal damage to whatever you hit, stay invincible for a few seconds and sweeping up any health pick-ups along the way – is not very important, either. Jousting is a fun and useful mechanic, but it’s also very extraneous, especially when the game doesn’t really reward fast play. There’s a combo system that seems to net you more cash but it’s hard to tell just how much more and whether combos, and using jousts to achieve them, are more valuable than a more cautious playstyle. Either way, I sometimes end up ignoring jousts because they’re yet another ammo to manage. Another plate to spin. 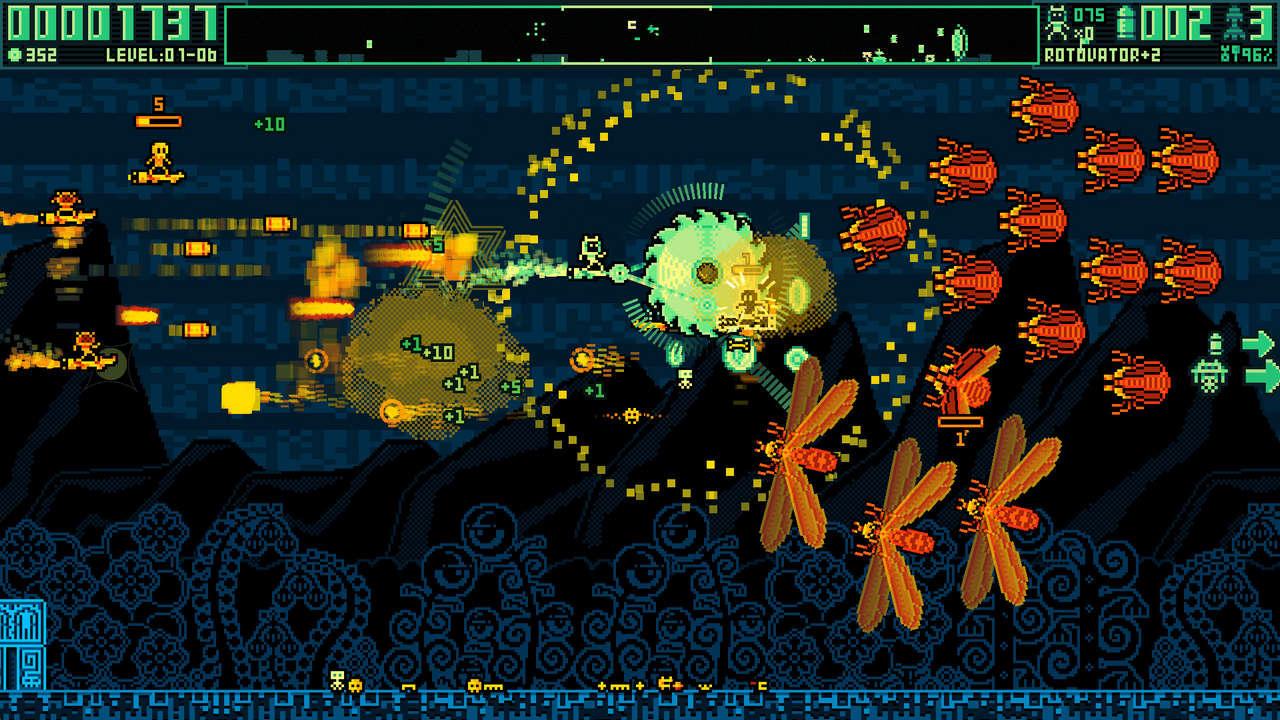 Overall, Jetboard Joust is a fun, well-made game with strong arcade gameplay and a solid loop. It’s just decked out with so much stuff to deal with moment to moment that it gets away from what made the classic so good in the first place. Still, Jetboard Joust should fill that Defender-sized hole in your heart for a while as a novel, cozier take on the formula, but whether it’ll fill it for long will depends on your own tastes.

It’s worth noting that the Switch version of the game is very solid, with slick controls and a bevy of options to customise your key bindings and overall gameplay experience further. However, I also see its frequent arcade-like frame drops during hectic combos as more of a bonus than a fault. If you’re not someone who enjoys that sort of dramatic flair, the PC version might be a better fit.

Jetboard Joust is a very fun, retro-styled arcade shooter that, for some, drifts away from what made Defender such a classic.