You wake up with tears in your eyes, sun blazing down on you. No memories of your past, no idea where you are, facing a house on the edge of a cliff. You find a key, enter the house, root around without permission and steal someone’s bag. Leaving the house, you see a boy who calls himself Giraffe. Oh, and you’re a cute anime girl with cat ears and a tail called Annika. Probably should have led with that.

This is Giraffe and Annika, the debut project from veteran game designer Atsushi Saito, now working under the name Atelier Mimina. The game is tough to categorise, feeling like a hybrid of a 3D world explorer/dungeon-puzzle crawler/rhythm game. As Annika, your job is to explore the mysterious world of Spica Island, piece together your memories, delve into dungeons, and defeat bosses in tasty rhythm battles. You’ll get help along the way from characters like Giraffe, a purple haired wolf-boy (yes, a wolf-boy named Giraffe is explained in the story), a family of rabbits (each with adorable punny names), an artist bird (who gets suuuper intense about his work) and many more. You’ll unlock abilities, find secrets, and legitimately have a fun time with it.

There is a lot to love about Giraffe and Annika. Visually, it’s a treat; the manga-style comics used to deliver exposition in the cutscenes are beautifully drawn, and radiate charm and fun. It’s impossible to keep a smile off your face when Annika is bouncing around like a hyperactive kitty, or enjoying dinner with a family of bunny rabbits — it’s just so freaking cute. The cutscenes’ art style carries through into the actual game world, with soaring mountains and pristine beaches like something from your favourite anime… provided your favourite anime features said mountains and beaches. One feature that absolutely rules is the collectable cat art, known as “Meowsterpieces” (get it?). These pictures are spread all over the world, giving completionists a lovely little challenge, but also reward the casual player with achievements and little in-game outfits for Annika to change into. The artworks all come titled with artists credited, a fantastic shout-out to the creative community that we can all get behind.

Given that it is, in part, a rhythm game, it stands to reason that Giraffe and Annika’s soundtrack and audio design are extremely important (if not the main priority), and the game is a rousing success in that regard. Each dungeon has a boss battle that takes the form of a rhythm game, with three levels of difficulty and a song that seems perfectly fitting for each dungeon and its place in the story (for example, the second dungeon has a beach theme, so the song is based around steel drums and island tunes). I found myself bobbing my head along with the notes and humming the songs aloud even days after playing. The rhythm battles come with multiple difficulty settings and a scoring system, which allows for hours of replayability; they’ll also keep you coming back to get that damn S grade score that you should have gotten but you ONLY MISSED ONE NOTE AND AAAARRGH!

…Moving on, Giraffe and Annika’s story is surprisingly well written. I honestly didn’t expect such a poignant narrative from this outwardly deceptively cute game. I’ll stay away from spoilers, of course, but I will say this: the ending is emotional. It’s a short, well-paced story that fills in Annika’s memory loss and ends in a cathartic release. Exploring Spica Island also rewards the player with deeper story elements and breadcrumbs of lore that the attentive player will eat right up. 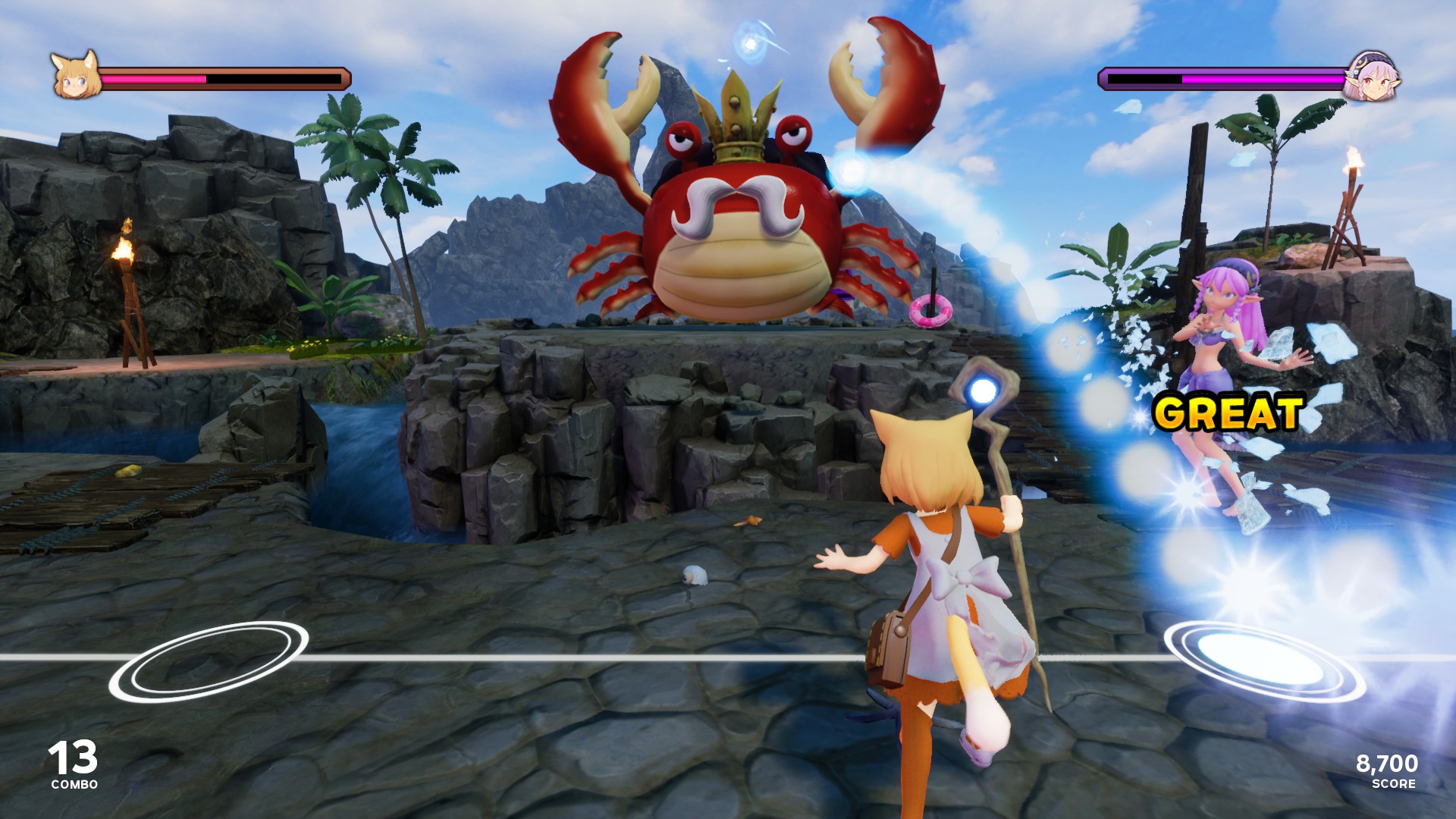 As much as I’ve praised Giraffe and Annika, there are some things that don’t quite land. Its hybrid nature works against it, and its clear and distinct sections end up making the game feel very disjointed. The exploration element doesn’t mesh with the dungeon experience, and the rhythm section just comes out of left field — almost as though Saito taped three ideas for separate games together. The separate parts are enjoyable, of course, but they are just that: separate.

As with any RPG worth its salt, you’ll need to do a fair bit of exploration at some points in order to find certain items to help you progress. It can get extremely difficult to find them, though, and it brings the whole experience to a grinding halt; nobody wants to be stopped in their tracks while they’re having a great time, just to find an item to progress. This isn’t necessarily a dig at Giraffe and Annika as a game, and it’s a very minor facet of the game as a whole, but it’s important to bring this up. Additionally, some of the NPC movements are a bit floaty and take you right out of what is otherwise a very polished game.

With that being said, Giraffe and Annika has a whole lot of positives going for it that completely outweigh those nitpicks. It’s a fantastic debut project for the newly-independent Saito, and I have no doubt that his future Atelier Mimina projects will improve upon the impressive foundation that he’s laid here.

Giraffe and Annika is a fun, cute, musical adventure with great artwork, music and gameplay that everyone can enjoy for hours and hours on end.

Nathan reviewed Giraffe and Annika using a Steam code provided by the developer.

Thank you for the kind comment! I’m glad you enjoyed the review, you should check the game out for yourself. Thanks again for reading!

Thank you for reading! Glad you enjoyed the review!