Luigi’s Mansion shone on the GameCube

The console was just a cube-shaped PlayStation 2 with a handle, but the younger brother finally had a game of his very own.

The GameCube was Nintendo’s final powerhouse, the last console the company made to compete with rivals Sony, Sega and Microsoft. It is also the first time that Nintendo so openly played catch-up to the rest of the industry.

Despite trying to convince an audience at E3 2001 that graphics and sequels were becoming too important in gaming, the GameCube followed Sony’s example. It aligned with PlayStation as the new industry standard and focused on visual fidelity, a universal gameplay experience and control scheme, as well as a push for player convenience — it even had a carry handle. With Microsoft’s Xbox arriving at the same time and following the same template, expectations had shifted and solidified inside a single generation. 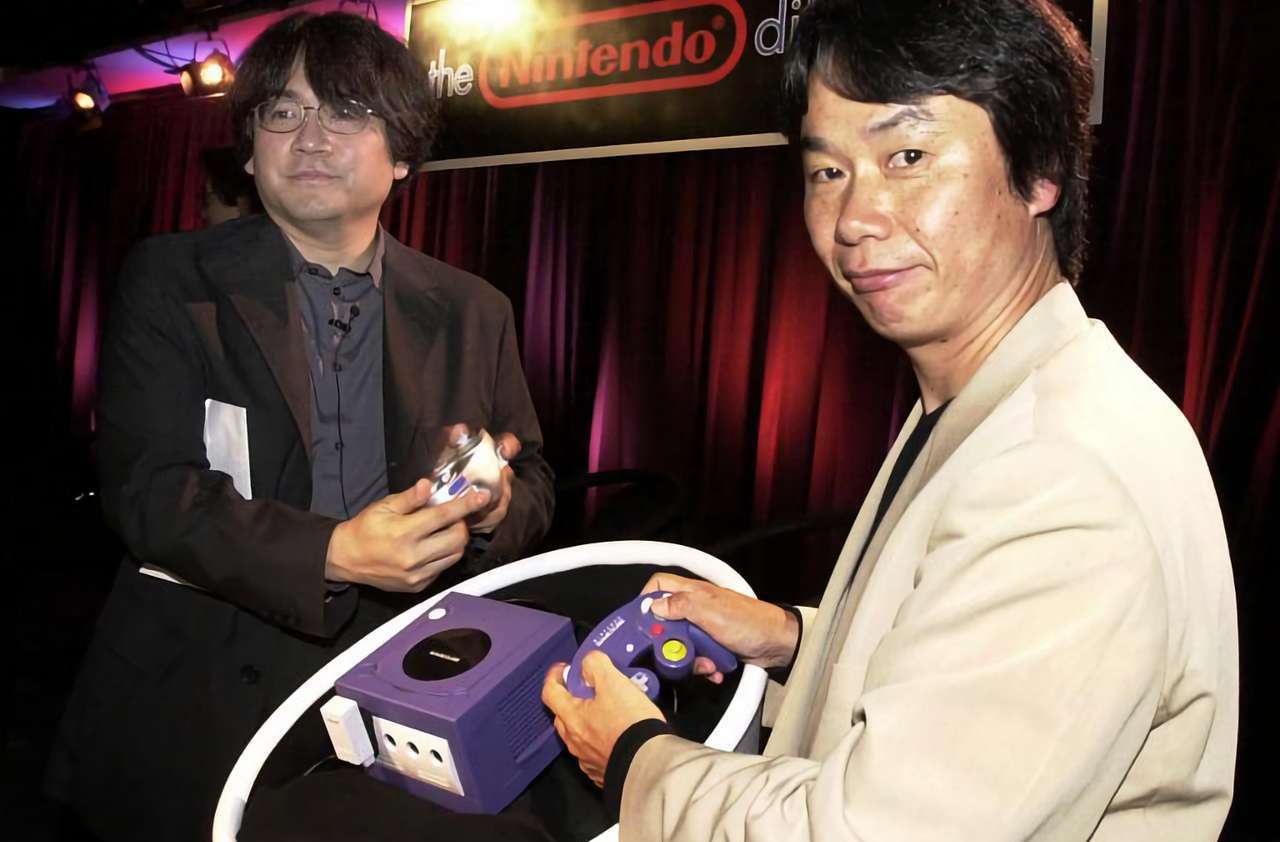 The GameCube used optical discs instead of cartridges for the first time ever on a Nintendo console, and it required PlayStation-like memory cards for save data. It supported online functionality through official broadband or modem adaptors, just like the original PlayStation 2 (the Dreamcast, Xbox and slimline PS2 would push online access as major built-in features). GameCube controllers featured built-in “Rumble” vibration and two analog sticks, echoing the PlayStation DualShock, but with no unique features of its own (unless you count the WaveBird).

There were reasons to make these changes aside from just following industry trends. Controllers more in line with the other consoles encouraged third-party support. Discs were a cheaper alternative to proprietary cartridges and had much higher storage. Online connectivity, though scarce on the GameCube (it only supported eight games), was quickly gaining popularity and adoption across the world. These features made sense for a modern console.

After the Nintendo 64 and Dreamcast’s struggles, third-party support seemed to be the GameCube’s main goal. It was meant to draw the kind of third-party support that the PS2 enjoyed, with processing power that fell between the PS2 on the lower end and Xbox on the higher end. Nintendo’s optimistic long-term strategy, assuming that the GameCube held steady with its rivals, was for its acclaimed first-party titles alongside “exclusive” third-party titles like Resident Evil 4, Eternal Darkness, Rogue Squadron and Viewtiful Joe to push them over the line. “The Nintendo difference”, in other words. If all three consoles were essentially the same, the theory seemed to be that GameCube’s uniquely strong line-up would nudge it ahead of the pack (or at least get it to second place).

On the whole, the GameCube was more like Nintendo’s take on a PlayStation rather than forward-facing hardware designed by an industry leader. It was a conservative and unambitious approach during an especially competitive era in video games.

Which finally brings us to Luigi’s Mansion, the GameCube’s biggest launch title. 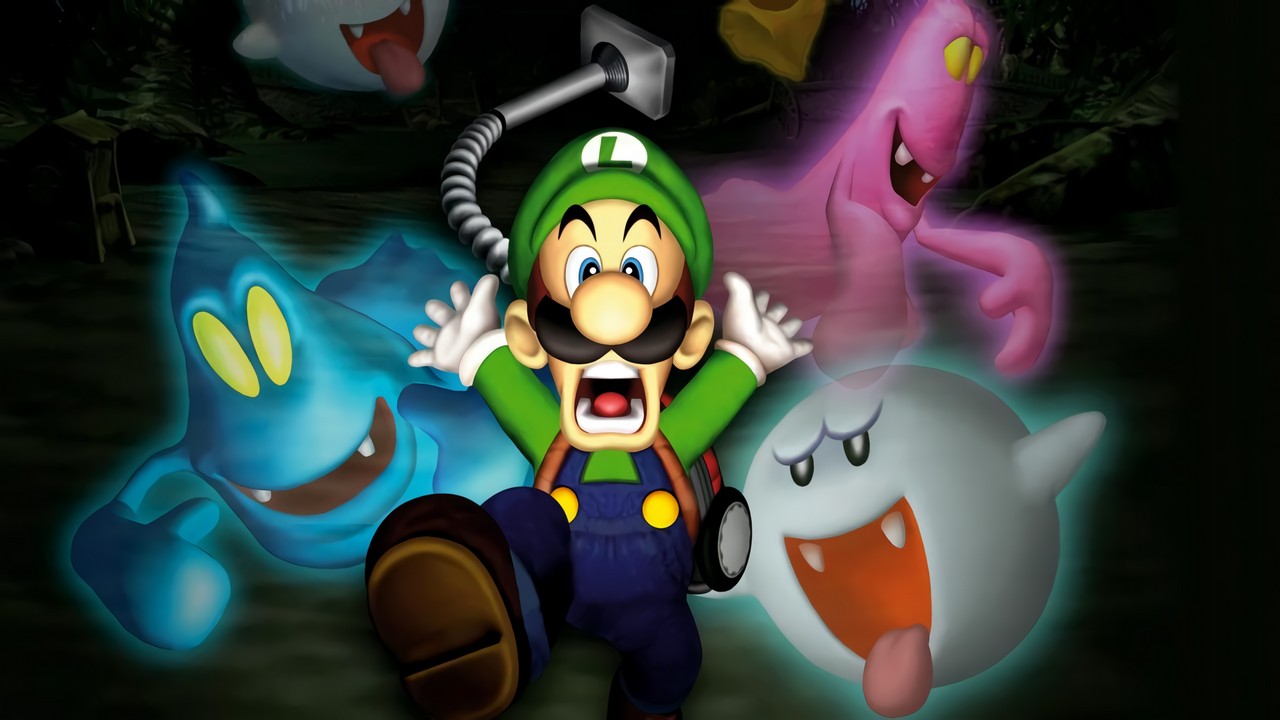 In Luigi’s Mansion, you play the green-clothed plumber searching a haunted mansion for his more-famous brother Mario. You use a flashlight and a vacuum cleaner called the Poltergust 3000 to snuff out ghosts throughout the mansion, find keys to unlock different doors, and use a Game Boy Horror to access your map. It’s very obviously Ghostbusters set in The Haunted Mansion.

Luigi’s Mansion plays like a twin-stick shooter crossed with a fishing mini-game: you lure a ghost in, stun it with your flashlight, “hook” it with the vacuum, chase it around to keep it hooked and wear it down, then suck the ghost inside the Poltergust 3000 once their health’s depleted. It reminds me of Splatoon, where Nintendo took a familiar genre — a twin-stick shooter — and turned it on its head, creating something both innovative and inviting. Mixing in elements of Diablo-style dungeon crawling and a bit of Resident Evil resulted in a refreshing twin-stick shooter about exploring and interacting with the environment around you.

As a launch title, though, the gameplay wasn’t what made Luigi’s Mansion exciting. It was the visuals. 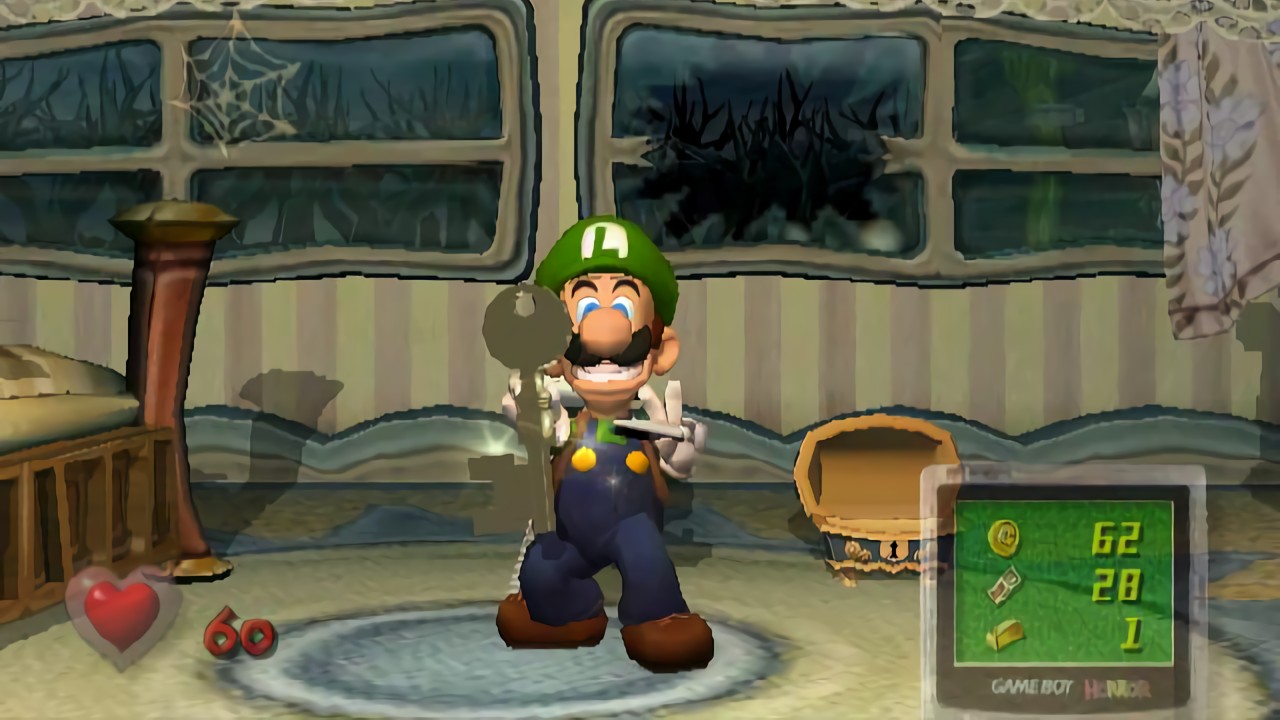 When Luigi’s Mansion was announced, press copy was laser-focused on how the game looked. “It is, without a doubt, visually [where] Luigi’s Mansion shines most.” Animation quality, natural lighting and reactive physics were what defined Luigi’s Mansion.

“Watch Luigi creep, cower and cry in fright” with “superb character and facial animations”. Lines like “use Luigi’s flashlight to create real-time lighting and shadow effects”, “accurate object physics include tables that rattle and cloth that swings back and forth in the wind”, and “real-time cut-scenes set the mood” highlight the kind of jumps made possible by Nintendo’s more powerful hardware. It was even meant to show off 3D TVs, but Nintendo removed that feature from the final release ­(it eventually appeared in the remake and sequel on 3DS).

At the GameCube’s official announcement in 2000, Shigeru Miyamoto said that the new console would “allow developers the freedom to concentrate on creativity without worrying about technical limitations”; with its Disney-like animation and cutting-edge lighting, Luigi’s Mansion encapsulated everything Nintendo wanted from the GameCube. It also sounds very similar to how Sony and Microsoft have been talking up their own next-gen consoles during 2020 and their efforts to deliver on what developers want from modern hardware. 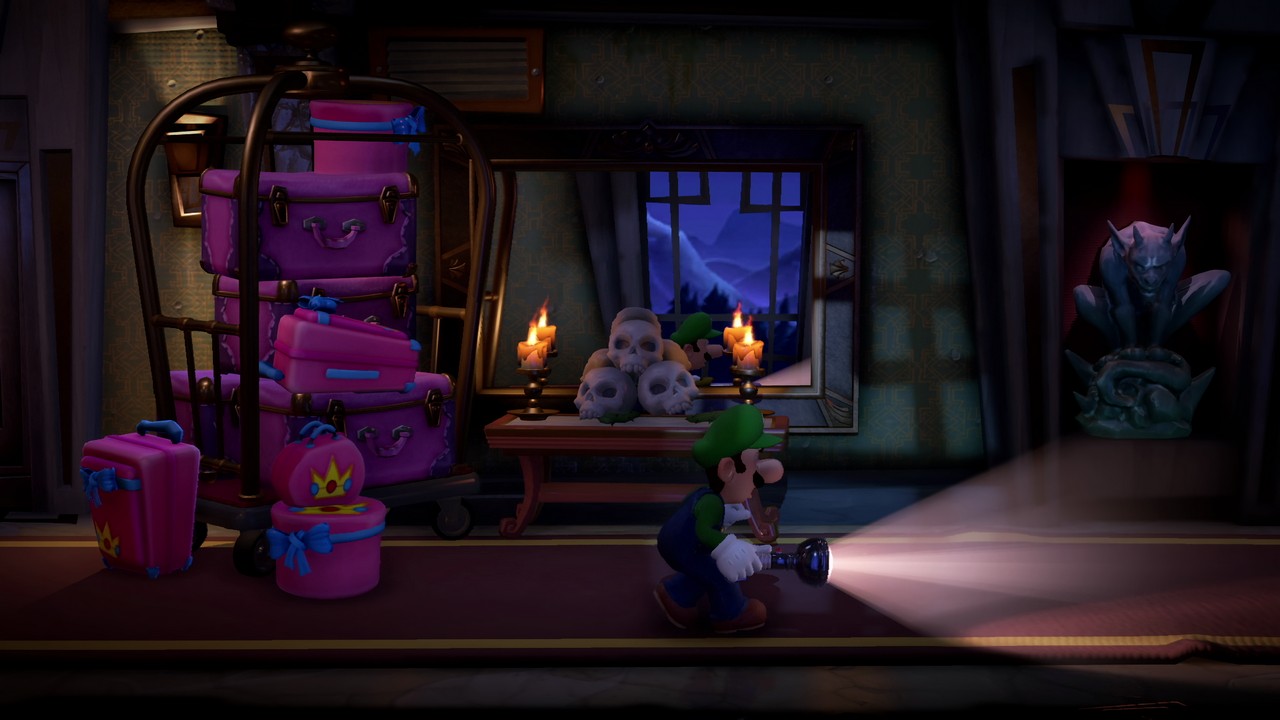 In 2001, Nintendo launched a console with real power behind it and Luigi’s Mansion was meant to showcase that. It was the tech demo, the game to show off how powerful and impressive your new console is, the game to invite envy. Looking back in 2020, though, Luigi’s Mansion comes off like the GameCube itself: a desperate rush to get back into the spotlight.

Luigi’s Mansion hits those familiar launch title beats. It’s a short 5-6 hours long, it shows off new graphics techniques and controller gimmicks, and it’s not a sequel (though it’s technically a spin-off). The gameplay is shallow and direct, there aren’t many puzzles and, in a game starring Luigi, there’s no platforming to be found. It shows off Nintendo’s first try at dual analog controls, though this wasn’t very novel by 2001. An excellent game by launch title standards, but less so from this developer.

It’s also a Nintendo game with a horror theme. Not to say it is a horror game — it’s spooky, not scary — but it’s still an unusual direction for the company. As a launch title, this seemed to hint that Nintendo wanted a game that could fit both a growing “mature” audience wanting edgier, darker and better-looking titles, and an expectant fanbase hungry for the next vibrant release. I’m not sure something like Luigi’s Mansion quite nailed that cross-section when it’s still so charming and whimsical, not “edgy” at all (unless you’re talking about the violent industrial machine that traps ghosts in paintings forever)… but it’s noticeably out of step with Nintendo’s usual style.

So, in that sense, wasn’t Luigi’s Mansion the perfect launch title for the GameCube? It was a console designed for a changing ecosystem that matches its rivals wherever possible, but afraid of losing the tone and overall style that made them successful in the first place. Ultimately, the GameCube lands in an awkward middle-ground that doesn’t especially appeal to either audience. 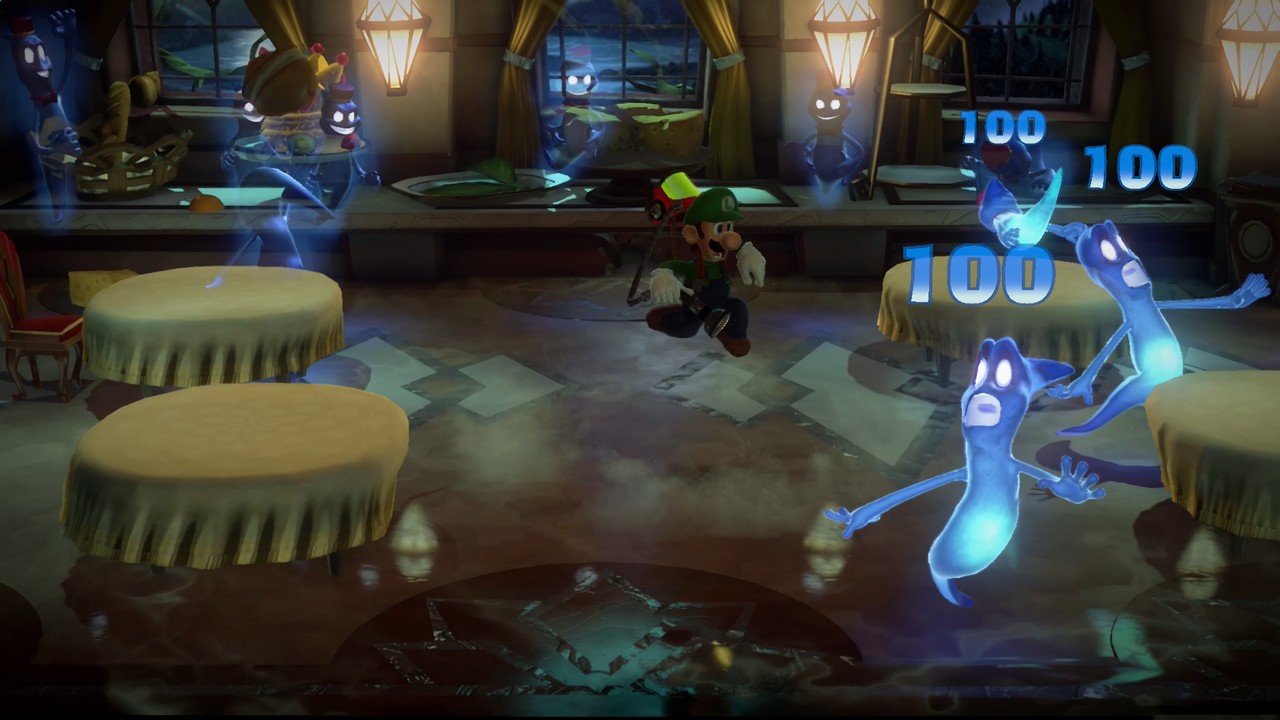 In the end, the GameCube was an insecure attempt by Nintendo to reform their image in a PlayStation-ified landscape. It didn’t work. The GameCube outsold the Dreamcast but not the newcomer Xbox and definitely not the PS2. It didn’t even outsell the Nintendo 64. It’s easy to see how the Wii spawned from there, with Nintendo stepping out of its competitors’ shadows to double down on its strengths as a game developer.

Luigi’s Mansion had an impact of its own, though. It had a remake and two sequels. It introduced two characters into the wider Mario canon, Professor E. Gadd and King Boo, and the original mansion setting shows up in other Nintendo games all the time. It also helps that the Luigi’s Mansion series might be the closest thing Nintendo has to a dungeon crawler that isn’t The Legend of Zelda, with a distinct Haunted Mansion vibe to boot. After Luigi’s Mansion 3‘s critical and commercial success, and given that it fills a genre niche that very few games even try to, it’s hard to see the franchise falling dormant again.

It might’ve started as a tech demo-turned-launch title, but just like Nintendo after the GameCube, Luigi’s Mansion evolved clear past its shallow trappings into a great series all its own.