Demon’s Souls is Sony’s Shortcut to Another Bloodborne

Sony wants a new Souls-style exclusive for the PlayStation 5 — but why wait for FromSoftware to make it?

With Demon’s Souls, Sony wants to recreate Bloodborne. In the same vein as FromSoftware’s eldritch classic, Sony wants another critically acclaimed, financially successful and widely beloved “Soulsborne” title as an exclusive for the PlayStation 5 — except this time, the console maker wants it right from the start. Bloodborne again, but as a launch title.

So how do you get another Bloodborne, especially by the locked-in deadline of a launch game? What if FromSoftware isn’t available to make such a game, or just doesn’t want to? How do you make sure that it’s at least close to matching Bloodborne‘s overall success and FromSoftware’s reputation? 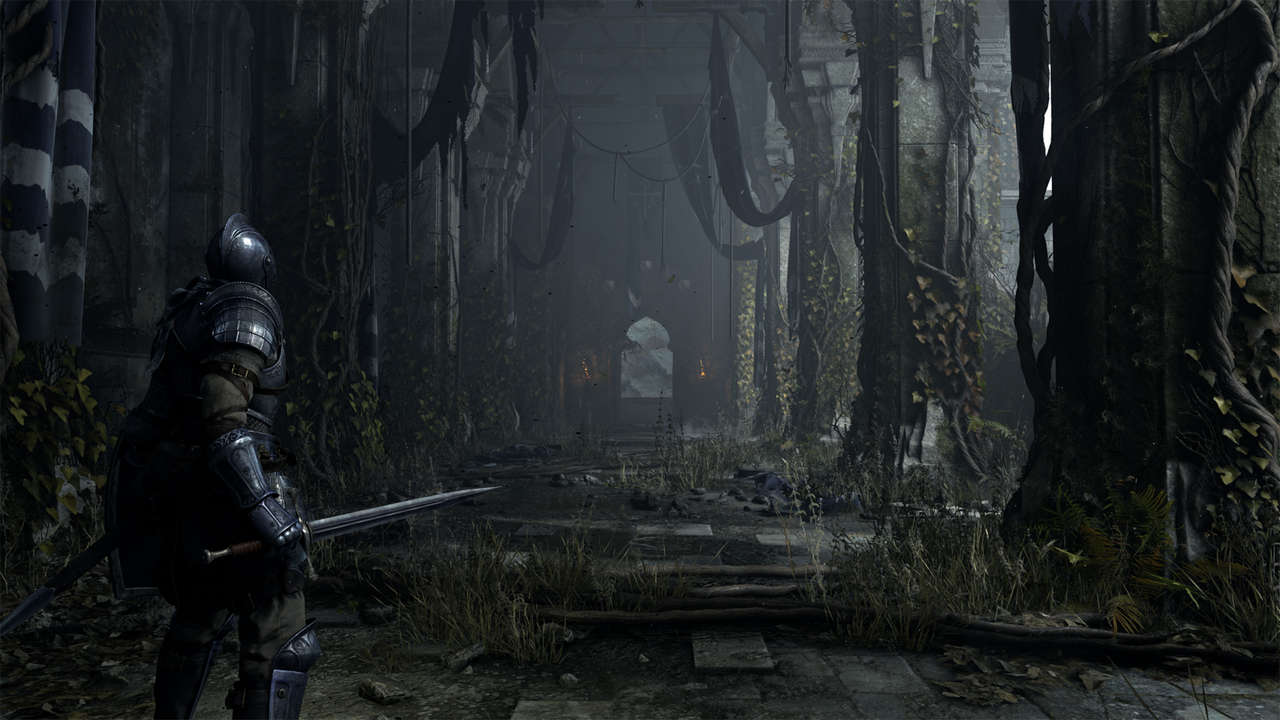 Demon’s Souls was originally developed by FromSoftware and released in 2009, and its title is still as frustrating to say out loud as it was a decade ago. The PS5 remake is instead developed by Bluepoint Games — best known for its work on 2018’s Shadow of the Colossus remake and its remastered ports of the Uncharted and Metal Gear Solid series — and co-developed with SIE Japan.

Demon’s Souls is the originator of the loose “Soulsborne” genre of action-RPGs. While other developers have tinkered with the formula, FromSoftware’s own are characterised by challenging gameplay with sparse world-building and story elements that reward thoughtful investigation, all within a bleak fantasy setting. The PS3 original wasn’t received very well in Japan — “some [demo players] put the controller down at the character-creation screen, which was particularly disheartening” — but Sony licensed the game out to Atlus and the company now known as Bandai Namco for worldwide localisation and distribution, and that’s where it found a dedicated following prior to the more popular release of Dark Souls in 2011.

Now, in 2020, we’re left to wonder how Sony is going to repeat Bloodborne‘s success with Demon’s Souls.

In the lead up to the PS5’s launch in November, Sony has hammered away at two big themes: speed and freedom.

The console’s slogan, at least at the time of writing, is “Play Has No Limits”. Its solid-state drive is usually the first thing Sony mentions when talking it up, and the company constantly described the drive as “lightning fast”. The PS5 is an “ultra-high speed” console that “[rewrites] the rules of what a PlayStation console can do”.

There’s the prerequisite list of next-gen features: ray tracing — “immerse yourself in worlds with a new level of realism” — 4K, 8K, high frame rate, HDR and 3D audio, but since the Xbox Series X can do all of that stuff too (except maybe the audio), it makes sense for Sony to hone in on its more powerful hard drive. Lastly, there’s the new DualSense controller with its upgraded haptic feedback and adaptive triggers.

When there are so few differences between the PS5 and Xbox consoles — it’s just the controller and the hard drive, really — Sony will emphasise what it can as loudly as possible. That’s where launch games like Demon’s Souls come in: it needs to prove that the PS5 is worth buying right away, and also instead of an Xbox. 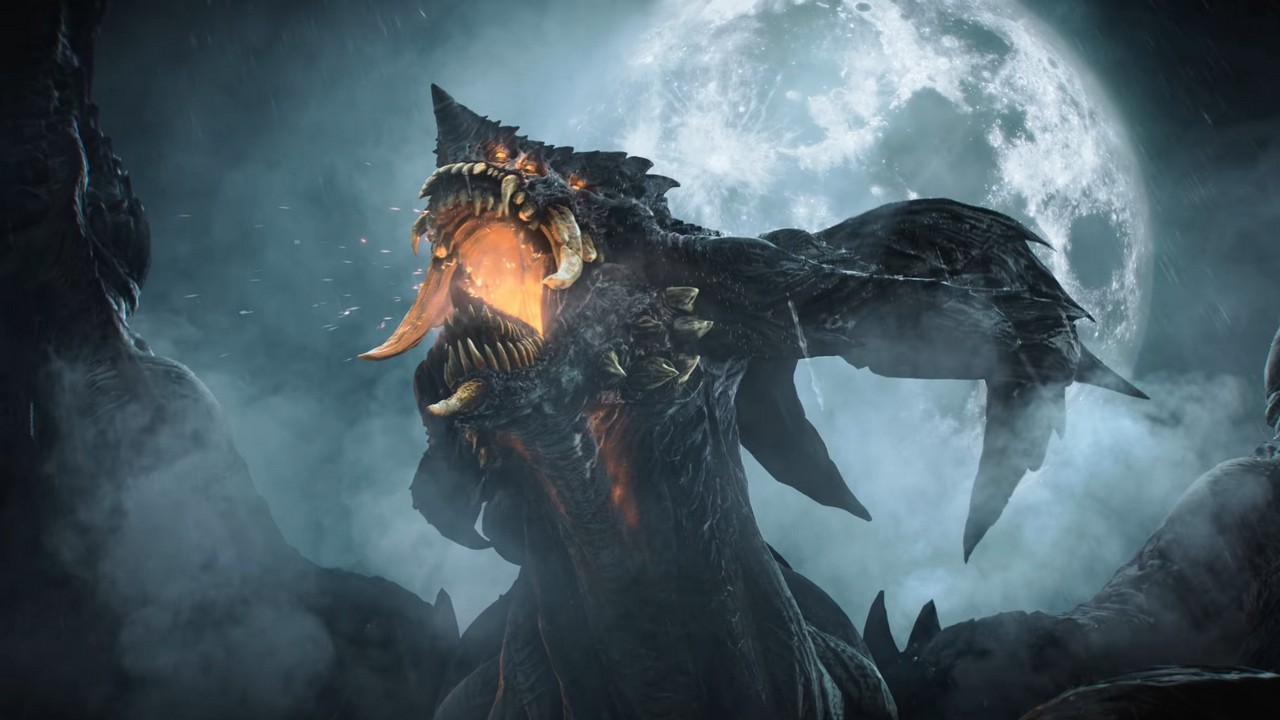 On the most basic level, Demon’s Souls makes an easy comparison point just by being a remake. I could say the same about Demon’s Souls and Bloodborne, or any other game FromSoftware has released in the last decade, but a remake more obviously points out the differences in feature set and visuals. You can point at something in the 2009 original, then at the same thing in the big-budget remake, and see how much better it’s gotten.

Compared to most launch games, however, Demon’s Souls should be a strong showcase for upgraded load times and fewer loading screens.

Like any other Souls-style game, Demon’s Souls expects you to die again and again. It’s a game where you stare at a lot of loading screens, whether you’re loading into a new zone, you’ve been eaten by yet another mimic or straight-up griefed over a ledge again. The genre has downtime baked right into it: you die, then you get tossed back to a checkpoint for a breather. You can’t just throw yourself at a boss again because you have to make your way back to where you were first, and you risk losing all the souls you had if you rush without thinking.

The PlayStation 5’s high-end SSD could very well erase a big chunk of that downtime. Demon’s Souls’ Creative Director at SIE Japan Studio, Gavin Moore, described SSD-led changes in September: “as developers [of Demon’s Souls], we are already changing the way we think about the SSD. We see it not just as storage but also memory, utilizing the speed of the SSD to load data at blistering speeds, bringing you straight back into the action to avenge your many deaths.”

September’s gameplay reveal gave us a glimpse of what this looks like. When the player uses the tutorial’s archstone to warp to the next area, the player evaporates and loads into an entirely new zone in under a second instead of being stuck watching a 10-second loading screen. Picture this applied to the entire game, to every time you access an archstone — the SSD could really shake up the established rhythm and pace of Demon’s Souls (though I’ll miss the cool loading screens from the original). 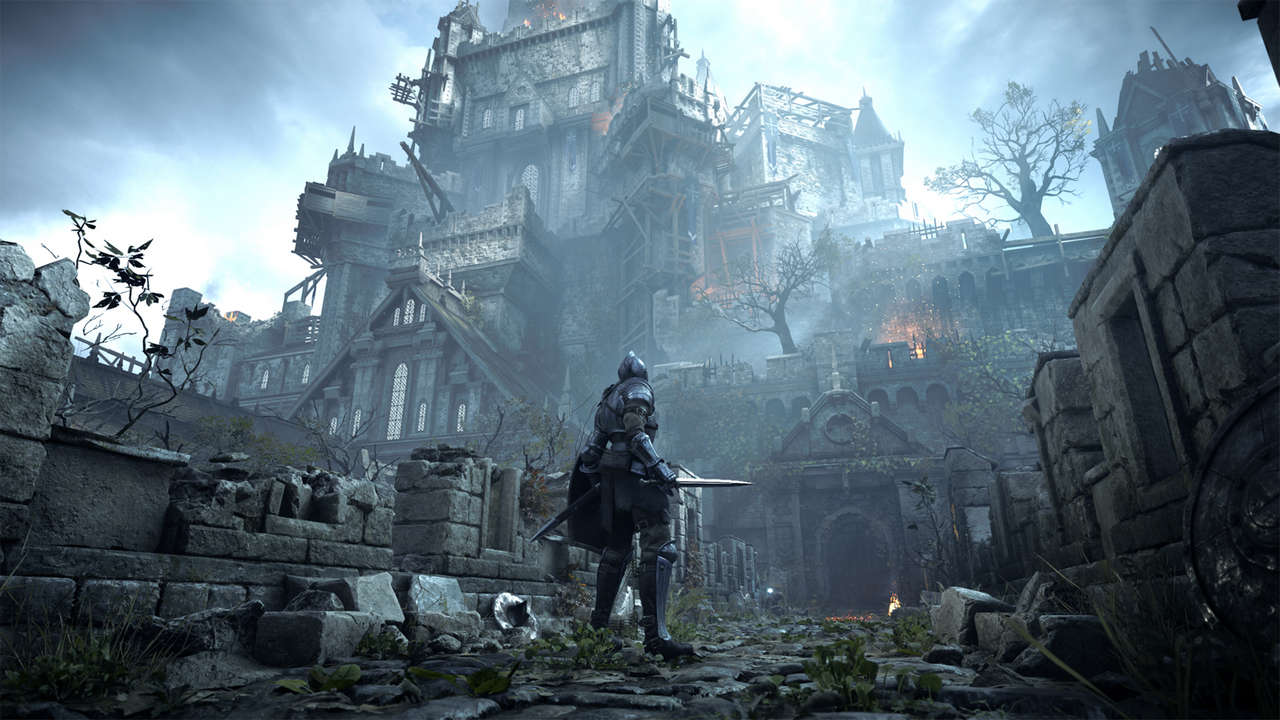 There’s also been some talk of how the game will use the DualSense controller’s new features:

… we can make the combat [in Demon’s Souls] feel grittier, darker, and deadlier. Now you feel every blow as you strike down your enemies and cast each spell. You’ll experience the force of a titanic boss’ attack as you pull off a well-timed guard. Metal strikes metal when your foes block your attacks or you block theirs. That extra sensory feedback through the controller allows you to know your attack hit home and your perfectly-timed parry was a success, so you can react faster and more decisively.

We can also turn the simple act of pulling a lever to open a gate into a sensory experience. This is something that rumble could never do. It could never replicate the feeling of metal striking metal or fire crackling in your hand as you conjure magic. Haptics [are] integral to the experience, to immersing the player in the world and adding to the gameplay.

By accentuating a game you’re (probably) familiar with already, whether that means the original Demon’s Souls or Souls-style games in general, it shines a spotlight on the controller itself. Instead of offering an entirely new experience via the controller’s features, these features are added to gameplay you already know. Spider-Man: Miles Morales will have the same approach, grafting DualSense features onto the original core experience of 2018’s Marvel’s Spider-Man (and also that game, too).

Sony is saying “this is what you can’t get on an Xbox, or even the PS4″. With Demon’s Souls, Sony wants you to see the game as a decisive upgrade to what you’d played before it. 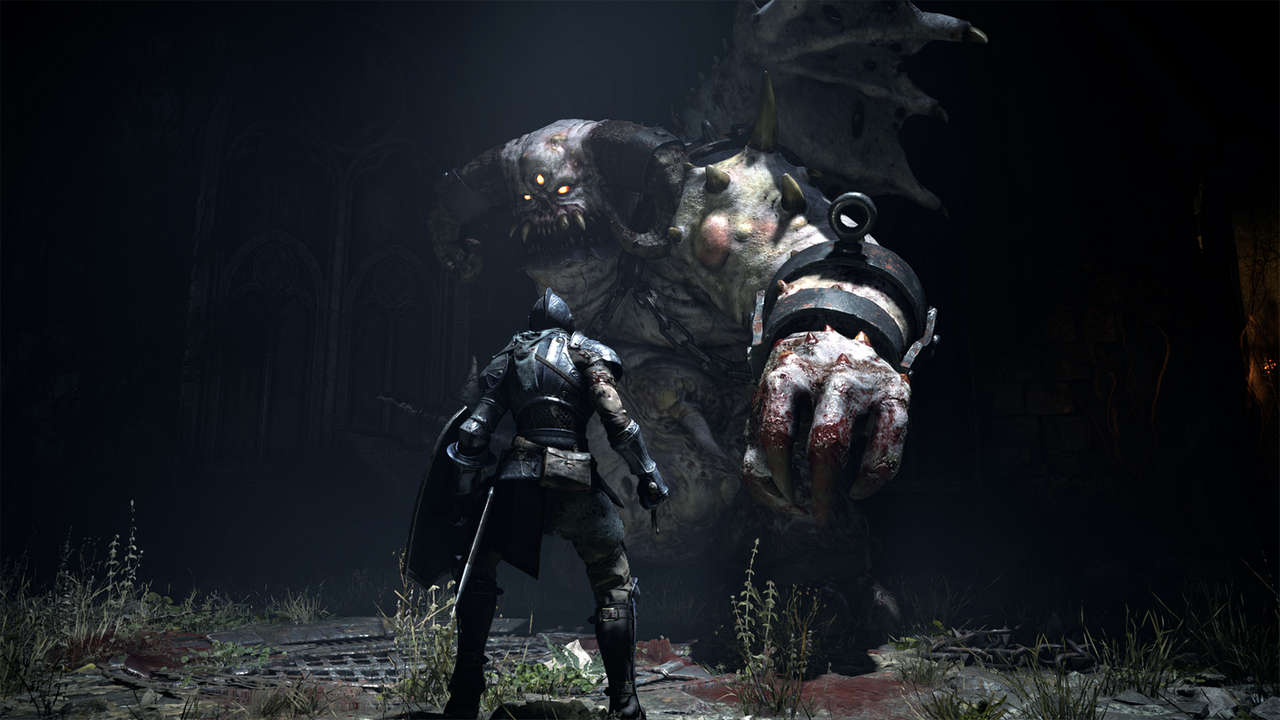 The same can be said about 3D audio. There aren’t any details on this yet but the ways other developers are describing the technology suggests how Bluepoint Games and SIE Japan could run with it. Returnal’s Game Director Harry Krueger says that 3D audio can “create a more convincing and accurate soundscape … a stronger sense of place” while also “[helping] with the player’s situational awareness, and make it more intuitive for players to pinpoint the locations of nearby enemies or incoming projectiles in the heat of combat,” while Resident Evil Village Executive Producer Jun Takeuchi says that “[i]t’s almost as if 3D Audiotech was made specifically with horror games in mind” and it is “a key feature to really push the next-gen experience”.

As a launch window title, one of Demon’s Souls‘ biggest strengths is its vivid atmosphere. It distinguishes the game from the rest of Sony’s lineup and could really show off the console’s 3D audio capabilities. The ambient sounds of bleak, desolate castles, enemy arrows flying past you as you rush forward, yours and enemies’ armoured greaves stomping across ancient brick corridors, the triumphant sweeping boom of boss themes.

For the same reasons, Demon’s Souls‘ use of ray tracing could set an early benchmark close to launch, especially after what we saw in the September showcase. As a dark fantasy game with a striking but evocative art style, filled with soft, natural light sources (both realistic and ethereal) alongside plenty of detailed stone, metallic and organic surfaces, it’s the exact kind of title that could make people care about ray tracing (if they didn’t already). 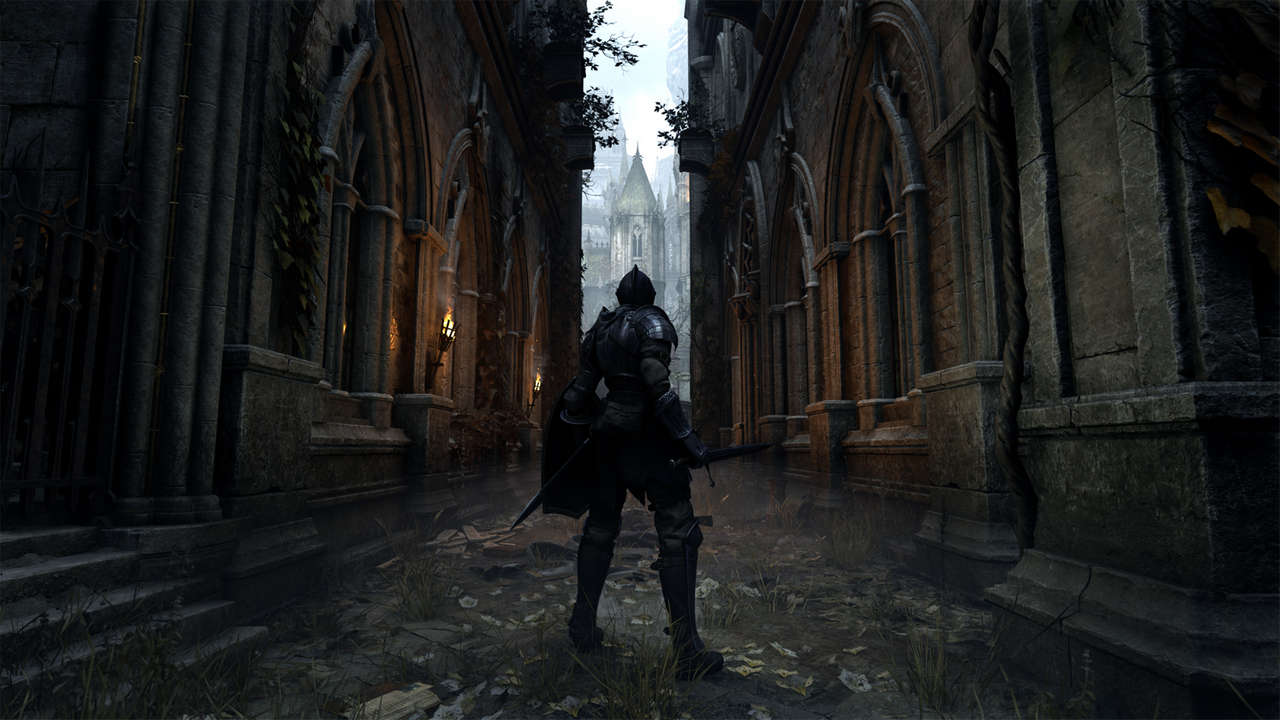 I’m still shocked that Demon’s Souls will release in November after Hell Year 2020, but I’m curious to see how it will show the PS5 off on launch day. On a technological level, Demon’s Souls will highlight the console’s biggest hardware and software features — it’ll demonstrate what the console can do and why you should get one. Plus it already has a very vocal and loyal fanbase, which never hurts; there will be more than a few players buying a PS5 at launch just to play this single game right away.

Beyond that, Bluepoint’s remake lends the PS5 a certain distinction in the same way Bloodborne did the PS4. It ties the console to an acclaim and adoration early on that few other series can. FromSoft’s games are hugely celebrated titles among more dedicated “hardcore” players – so most people reading this – and considering these are the exact type of people who buy next-gen consoles ASAP, a new Souls game makes a lot of sense.

Right now, I have no idea if a remake of Demon’s Souls will be quite as beloved as Bloodborne. It’s easy to see reception veer toward the disappointed when FromSoftware succeeded and evolved its foundation so far in future games. Either way, I’m excited to see how Bluepoint and SIE Japan make FromSoftware’s game unique to the PS5.