I’m a proponent of the idea that games should be shorter. We’ve written about it here on Doublejump: stories can be told without the padding of sidequests and filler content, and can be more impactful because of it. Well… Fire Tonight lasts around half an hour. I’ve played and loved games that are half an hour long; the original Super Mario Bros can be done in less than that, and Sayonara Wild Hearts is a more recent example, sort of a mini music album where each level brings new music and new gameplay elements — twin stick shooter, endless runner, rhythm game. What both of these have in common is that they have a score, a reason to come back and get better and continue to enjoy the video game. Fire Tonight doesn’t. That first playthrough is all you’re here for. 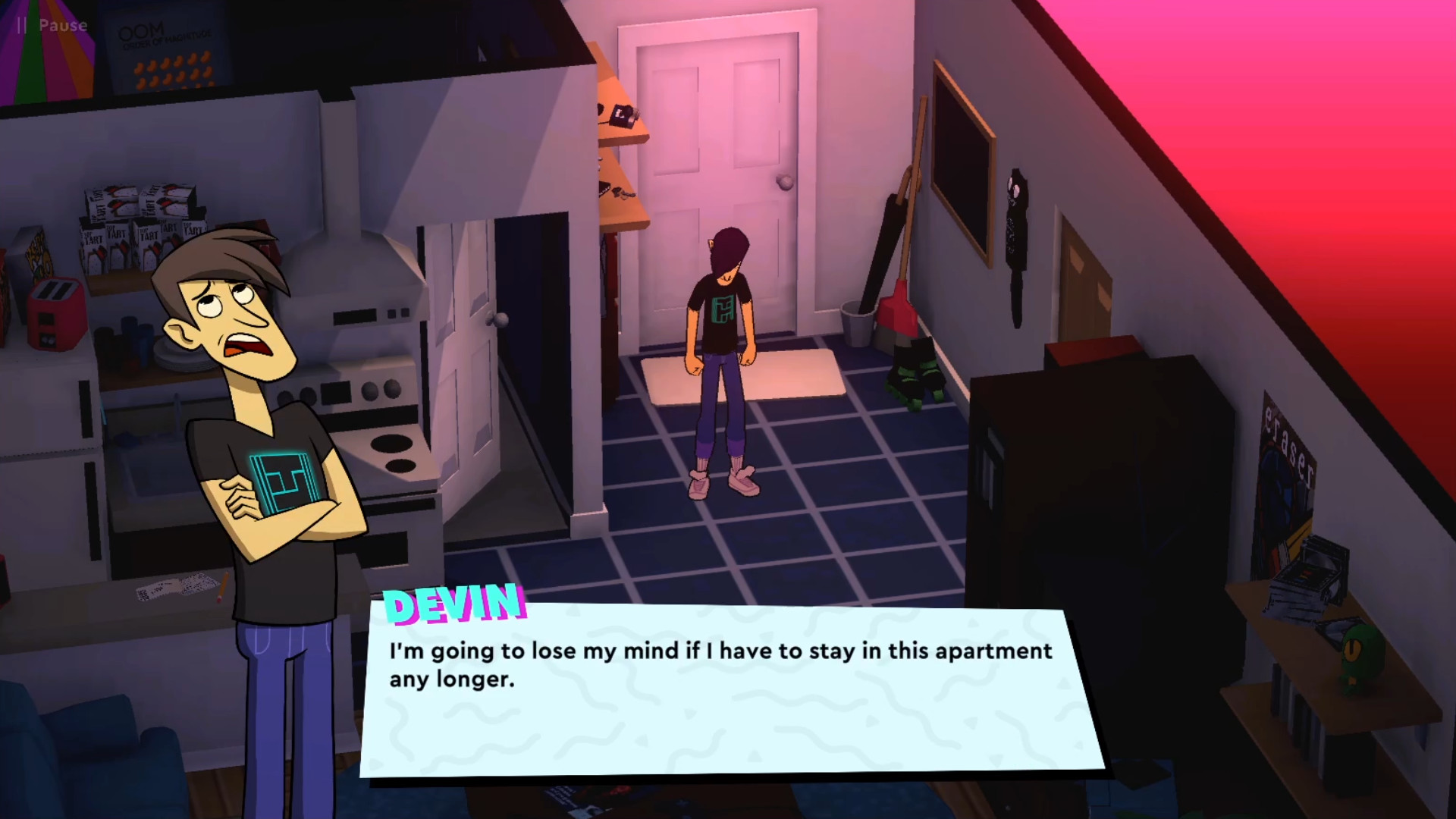 Surely, then, it stuffs that runtime with fun? Well… No. The gist is that there is a fire in the city. At night time. Hence the title. Two people who are in a relationship call each other and decide to meet up because they are worried about each other (because of the fire). The gameplay alternates between three to five minute long isometric walking segments for one character, and three to five minute point-and-click segments for the other, with one avoid-the-obstacles endless runner style section thrown in.

Let’s start with the point and click segments: they’re probably fine on a PC, but for some godforsaken reason you get a cursor on the Switch, which is utterly painful. You click on a handful of objects in this guy’s apartment and get some background on this couple’s relationship, which is… fine. It’s just not especially deep, nuanced or interesting: the also-quite-short Florence absolutely soared with its artful and wordless beauty, but Fire Tonight inspires not much other than boredom. It hints at themes of isolation, and the experience of being an immigrant, but does it by showing you a single still image and a line of dialogue and then never talking about it again. The graphical style doesn’t do the content any favours either; the characters look like they’ve been ripped straight from Cartoon Network and are difficult to take seriously.

The walking segments have you exploring the city, solving some basic puzzles and navigating some simple stealth sections. There’s little effort put into making the puzzles diegetic — they just… exist, for some reason. You’ll find keys for locked doors or gates randomly lying around on rooftops, which even the characters call silly. Listening to music makes fire temporarily disappear so you can move further. Doors lead to random other doors in other buildings because “it’s a maze in there!”. What’s strange is that one oddity is explained: this game is based on a song of the same name, a synthpop number from the early ‘90s, and it explicitly mentions “police in the park”, which is recreated in-game as a reason to include stealth elements (and the characters make a jab at how that’s weird, because it’s a fire, like a wink wink nudge nudge moment). The others? Just uninspired, easy game design decisions. It’s not terrible, just ill fitting and uninteresting.

The endless runner style roller skating segment lasts around 90 seconds. I will review it thusly: it’s easy and not good. 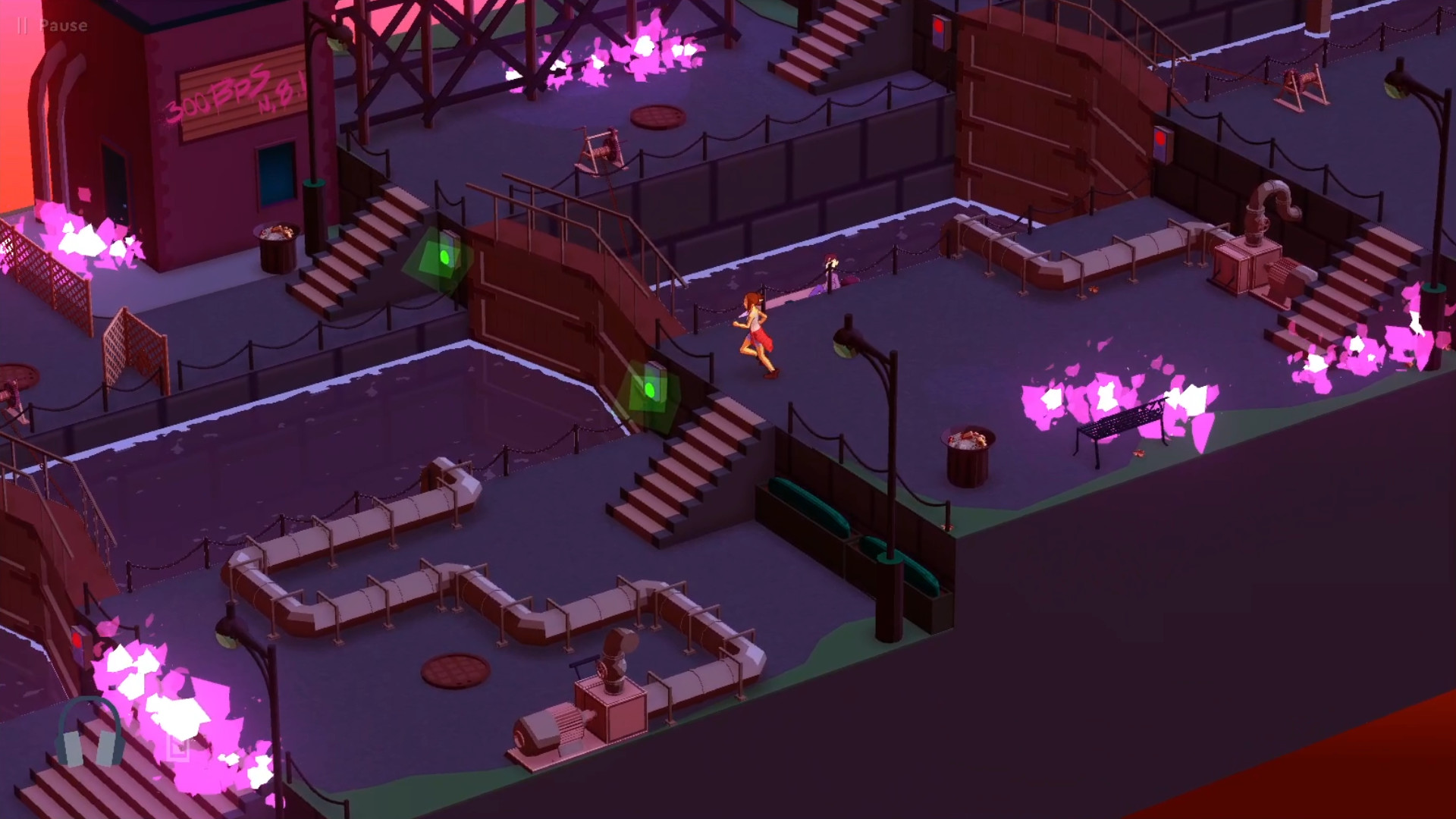 Yeah, so uh… save your money. This barely tells a story, and throws some confusingly designed and largely uninteresting gameplay at you for half an hour. If you really love the original song, maybe you’ll get a kick out of this, but Allmusic even described that as “unbearable”, so… this one’s probably not for you.

Nothing new, inventive or exciting to be found here. A bland story, uninteresting gameplay and some bizarre decisions, like including a mouse cursor in a Switch game. It’s also less than an hour long. Don’t concern yourself with this one.

[…] Ben kicked off the week with his review of the very short, and very underwhelming Fire Tonight. […]