I’ll preface this review by sharing one of my greatest shames: I am terrible at fighting games. Whether it’s your standard arcade beat-’em-up or a sweaty 1v1, no items, Final Destination Fox-only brawl on Super Smash Bros., I can’t press buttons to save my life — or anyone else’s. I fumble, I drop block, I panic, I button-mash… you name it, I’m guilty of it. Most of that is because I’m easily overwhelmed by the depth and complexity of most fighting games; I can’t cope with the amount of information I need to analyse and process in order to make “reads” or get combos off.

As a result of my laughable lack of skill, I’ve come to dislike fighting games. I’m bad at them, so I don’t have fun playing them, so I steer clear. Fight Crab, however, is different. I was drawn in by fact that it doesn’t take itself too seriously: it’s a game where crabs fight each other with guns and other weapons, its ridiculous combat looks exactly how I’d imagine Goat Simulator looking if it was a fight to the death between stock Unity assets, and it’s all drawn together with shonen-style battle music; I stuck around because you don’t need to learn any combos, you don’t need to study your opponent and you don’t need to understand a bunch of mechanics — you just bum-rush the Giant Enemy Crab and hit their weak spot for massive damage without a care in the world about whether they were going to execute some zero-to-death combo at the drop of a hat.

Fight Crab is not going to make any top-ten lists — hell, it probably won’t even make a top-100 list unless that list is a really, really niche list — but it’s fun. It’s casual, light-hearted, utterly hilarious fun. 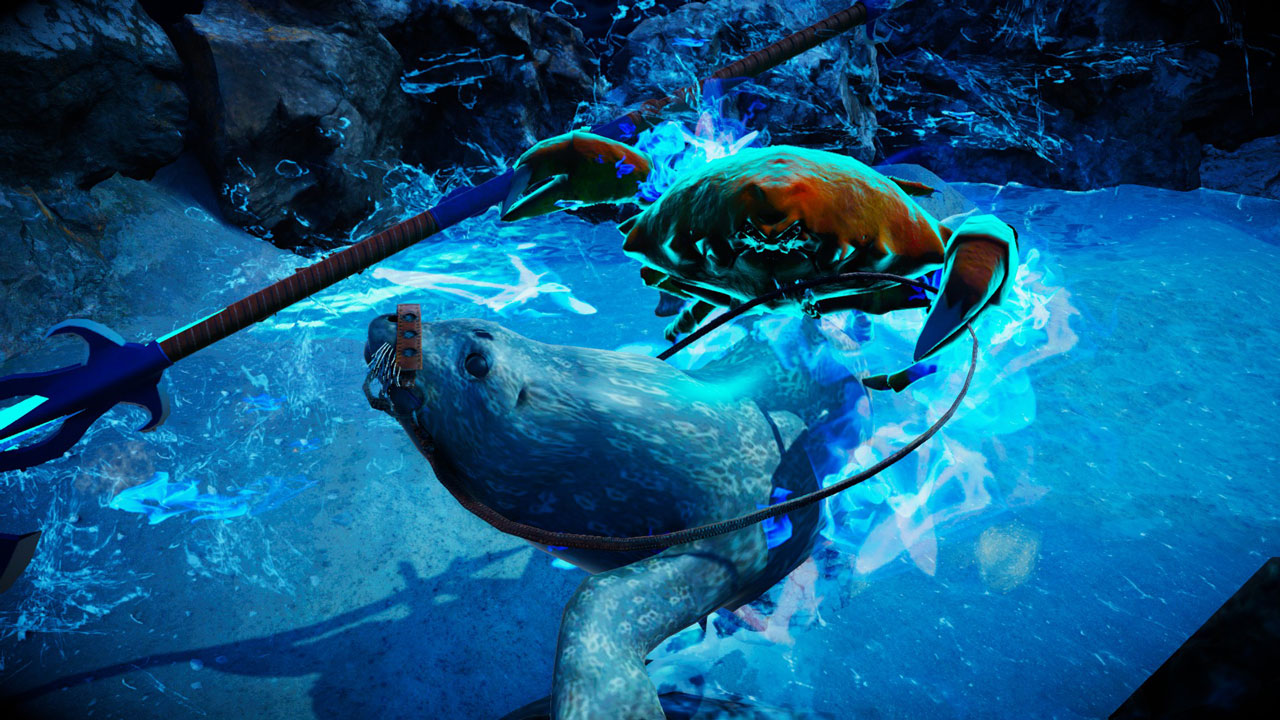 Fight Crab is the latest release to come out of the notably seafood-oriented Calappa Games, which is actually named after a sub-species of crabs and whose previous work includes titles like Ace of Seafood and NEO AQUARIUM. Given that both of those titles also follow the theme of putting marine creatures in ridiculous action-movie scenarios, it’s hard to be surprised that Fight Crab is the way it is; over-the-top physics-based combat is par for the course for Calappa Games, and Fight Crab meets the brief.

The most surprising thing about Fight Crab is how damn simple it is. It seems like it’s quite technical from afar, but Fight Crab really just boils down to two players piloting their armoured death machine in the form of a crab at one another and seeing who can smash buttons the best. Sure, you could devote time and energy to learning the ins and outs of Fight Crab’s surprisingly accurate limb control system (think ARMS, but with fewer springs) in order to precisely smack your opponent, but you don’t have to in order to have fun — Fight Crab welcomes you to just connect and play. It doesn’t care if you don’t know how to play a fighting game, or if you’re terrible at it, it just lets you have fun and feel awesome.

Fight Crab has you select from a variety of crabs, arm them to the teeth (fun fact: crabs have teeth in their stomachs) with anything from Excalibur to a jet engine, and get stuck into fight after fight of a campaign mode that takes you through such scenic locales as a rock pool and a tabletop in a Chinese restaurant. Instead of a health bar, Fight Crab has a Super Smash Bros.-esque percentage per crab — the higher it is, the more likely you are to be able to flip them onto their back for the win. If you’re taking a beating, Fight Crab offers you a “hyper mode” through which you can shift into Maximum Overcrab and dish out a barrage of claw-punches or unleash the absolute mother of all Spirit Bombs upon your opponent.

Although Fight Crab does have an online multiplayer mode, it’s not too heavily populated. I did try to get into a multiplayer game once, but after a 25-minute wait I came up against someone who, out of pure fear of my crustacean dominance, equipped shields in both of his hapless crab’s claws. Needless to say, I promptly thrashed him using my halberd’s superior reach… and was never able to find another online game. Despite that lack of online players, though, Fight Crab really isn’t a serious enough game to lend itself to the sort of sweat-fest online gameplay often becomes; it’s far more likely to shine as a bit of dumb fun with friends on your next games night. Who brought a fish to a knife-fight?

In fairness, despite the fact that Fight Crab isn’t a serious game, the physics on display here are just complex enough that there would be a considerable skill gap between serious players and not-so-serious players. There could very well be some techniques to be learned or some crabs to be mastered, and I’m sure there is room for more serious play to carve out a community of determined crab-fighting professionals; Fight Crab esports would be an almighty spectacle, but that dream is somewhat tempered by the fact that it’s not pretty to look at, or to play. The controls are unreliable, and while that doesn’t bother a filthy button-masher like myself, it’s sure to drive away anyone who would be interested in building a career as a niche esports player. No matter what environment you’re in, the game players in a floaty manner similar to trying to wrestle your friends in a swimming pool filled with honey… just a little crustier, and with more legs.

The gameplay on offer here is really a strength and a weakness. The physics make up the majority of Fight Crab’s crazy, hyper, limb-swinging action, which prevents it becoming a frustrating mess like other fighters if you’re not too good at it, but the lack of control you’re afforded — especially when trying to execute a more complicated manoeuvre like thrusting your lance while riding your seal or scooter into combat — can hamper your enjoyment at the same time. There’s simply no fun in watching your crab thrash wildly and hit nothing, or trying to execute a specific move and watching your crustacean avatar do something completely different.

For now, although it’s ugly as sin and plays like ARMS in honey, Fight Crab is a bit of crazy, dumb fun that I don’t think anyone can really hate. I doubt that it’s going to become the next big fighting game, but can vouch for the sheer fun it provides and, if some crazy thing happens and we do see it on a fighting game tournament floor next year, you can be sure to find me there cheering it on.

Fight Crab is rough and ugly, but it’s charming nonetheless. It embraces the sheer fun of fighting games in a way that I hope we see more of in future.