“Could patients please look less sick when the health inspector arrives? Thank you.”

Two Point Hospital is an addictive game with an interesting history. In 1994, Bullfrog Productions, developer of such “hit titles” you’ve never heard of as Dungeon Keeper and Syndicate, created a game called Theme Park. True to its name, Theme Park let players build and manage their own theme park, dealing with hazards and budgetary restraints along the way. By 1999, when Hasbro Interactive and Chris Sawyer Productions released the extremely similar RollerCoaster Tycoon, Bullfrog Productions had produced 11 games, one of which was a spiritual successor to Theme Park entitled Theme Hospital. Theme Hospital’s gameplay was very similar to Theme Park’s in that the player builds a hospital and manages its day-to-day activities. Theme Hospital was a critical and commercial success, which wasn’t saying much considering the marketplace success of Maxis’ The Sims and SimCity.

Due to the first Electronic Arts’ many ill-fated acquisitions, Bullfrog Productions became defunct in 2001 and its staff moved on to different companies. After spending much of the next decade and a half with Bullfrog founder Peter Molyneux at Lionhead Studios – best known for the Fable series – two of Theme Hospital’s leads, Gary Carr and Mark Webley, came together to found Two Point Studios in 2016. Two Point’s first title comes to us as a result of their work together on Theme Hospital and a publishing partnership with SEGA, and with a name like Two Point Hospital, it has a very distinct signature to go along with its very distinct style.

A “thematic successor” to Theme Hospital, Two Point Hospital is a construction and management simulation with buttery smooth controls, addictive gameplay, a wicked sense of humour and an animated art style. The gameplay is incredibly intuitive, catering to both newcomers and veterans of the genre. Much of this intuitiveness owes itself to the fluid, user-friendly camera, with every common and necessary camera movement mapped to your mouse: clicking and dragging to an edge of the screen moves you around the hospital, while the middle button allows you to rotate the camera and adjust its pitch. Everything you can do in Two Point Hospital, from building rooms to hiring staff and managing the hospital and beyond, owes its ease to this intuitive camera, which makes the game feel far more responsive and a joy to navigate. 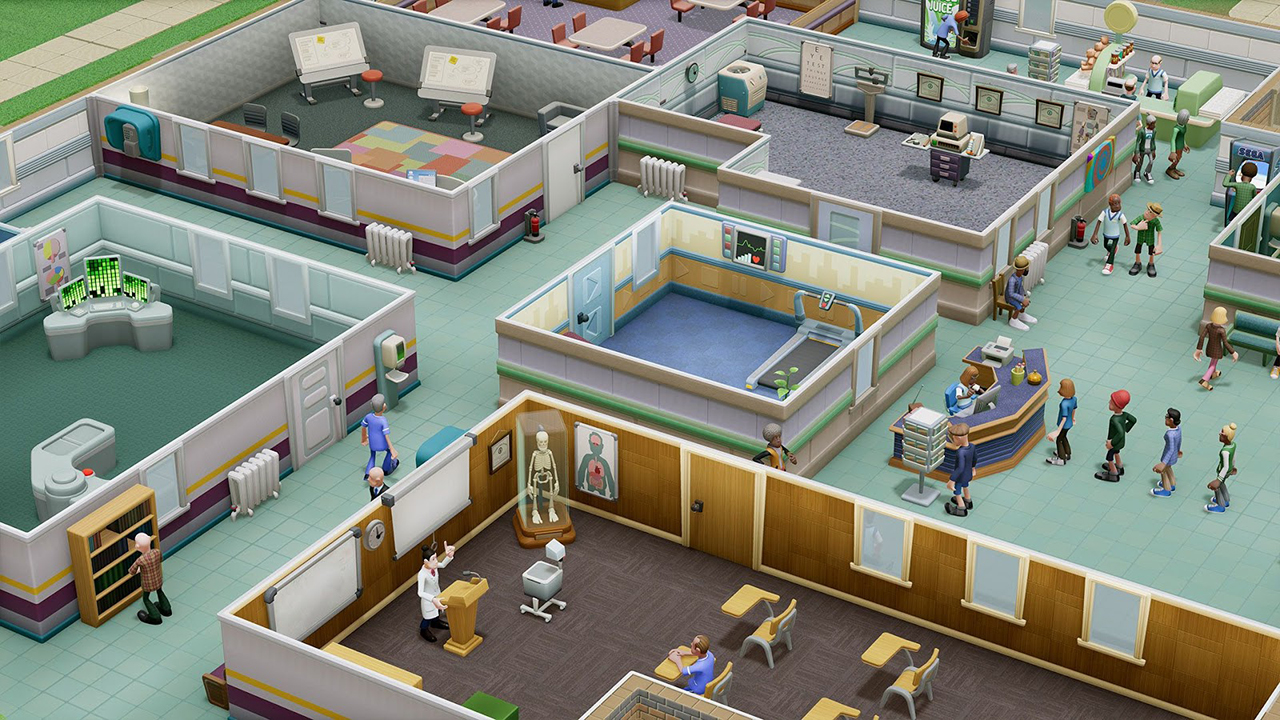 As you might expect from a hospital simulator, Two Point Hospital offers plenty of challenges to keep you on your toes, but they’re all relatively easy once you get into the groove of running your first hospital. The challenges do get more difficult once you move onto your second hospital, though, where the game will challenge you to go a certain amount of time without losing a patient in either hospital; this obviously requires you to juggle both hospitals’ demands – as well as those of their patients and staff – and can be a little difficult if you’ve played your cards right.

Two Point Hospital’s other major challenge comes in the form of money management. Although you’ll start the game with more money than you know how to use, it’s important to manage that early funding and avoid splurging your way into a hole, because getting out of it will almost certainly force you to risk your hospital’s good reputation. That reputation depends on low prices, cured patients and speedy service, and patients will react if you begin to slip in any of those three areas: raise your prices to bring more money in, and patients will refuse to pay; close one of those specialty rooms you splurged on, though, and patients will either start to die in your care because the right services weren’t available, or get annoyed that they’re having to wait longer to be treated. It’s a classic “pick two” conundrum – you can have a good reputation, a good profit margin, or a bunch of specialty rooms, but you can’t have all three.

The only major negative to be seen is the ever-present ‘Clippy’-style assistant that pops up to give you advice on what needs to be done around your hospital(s). It’s helpful at first, calling your attention to things you might not have noticed or considered while getting acquainted with the game, but it becomes little more than a nuisance at around the point where your first hospital is well established – by this point, you’ll almost certainly be knowledgeable enough that it won’t be giving you any new information. Unfortunately, I haven’t found a way to turn it off – if there even is a way – but it doesn’t detract from the fun managerial gameplay at hand. 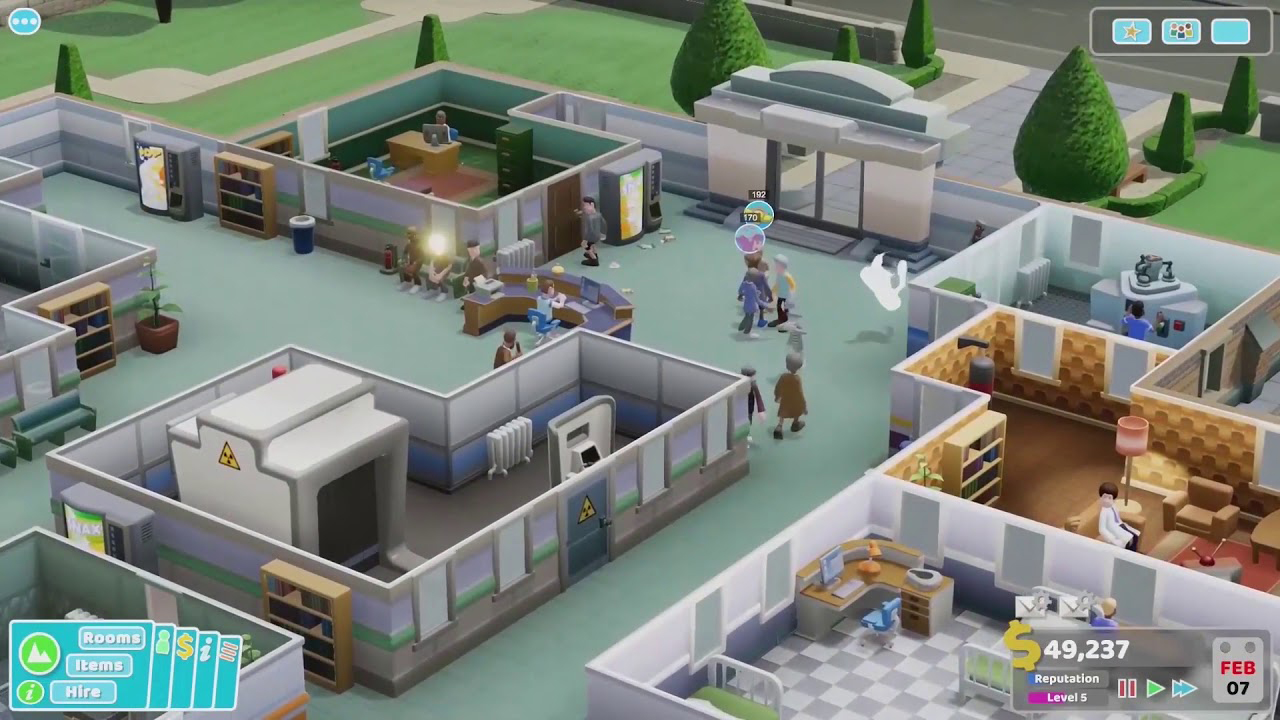 The game oozes style from every orifice, a mixture of sarcastic 90’s flair and modern, refined game execution; this style shines through the most when you listen to radio DJ Harrison Wolfe. Intercut with chirpy Sims-esque muzak and sounding like Steven Wright on lithium, Wolfe makes some hilarious observations that become even funnier due to his hilariously apathetic delivery. Two Point County’s other DJ, Ricky Hawthorne is the polar opposite, reading the news with a chipper attitude, no matter how dark.

Outside of the radio, a lot of the game’s humour is also derived from the illnesses themselves and how they’re presented; a light-headed patient will have their head replaced with a light bulb, for instance, while a patient suffering from the psychological ailment “Mock Star” will present dressed as the late, great Freddie Mercury. It’s visual gags like these that help make Two Point Hospital the fun, light-hearted construction and management game we all expected from a studio whose leads were chiefly responsible for Theme Hospital. Its humour, style and intuitive gameplay all come together perfectly to turn running a hospital into a fun, light-hearted romp that’s good for hours of fun.

Two Point Hospital is the perfect game for those who are old enough to remember both how good construction and managerial sims were back in the late ‘90s, and how bad 2014’s SimCity was. It’s hilarious, fun and surprisingly addictive. Grab it now!

Nick reviewed Two Point Hospital using a retail PC code gifted to him by a friend.