The Forbidden Arts started off as a nostalgic experience of sorts, complete with simplistic gameplay, multiple environments, and an amnesiac protagonist gifted with elemental powers, who must now embark on a quest to determine the fate of the world. Unfortunately, by the end of the experience, The Forbidden Arts had me scratching my head at a repetitive gameplay loop, overused environmental assets, and a story that took a backseat way too early. It’s a shame the experience soured for me early on, as The Forbidden Arts harkens back to a simpler time, where adventure games could get by on their simplistic charm alone – a time where we could be more forgiving of aspects such as graphics, level design and difficulty. The Forbidden Arts follows a young warrior named Phoenix, who seeks to master elemental spells and must travel across the land to perfect his craft. Sadly, Phoenix’s story is a rather bland journey across various two-dimensional dungeon-based environments with the occasional 3D overworlds to break it up and help navigate between certain levels. I don’t mind a simplistic story, especially in a game that so obviously aims to invoke nostalgia, but said story takes a back seat so early that it highlights just how awkward the gameplay is. The game’s lack of any dialogue removes some more of the immersion, particularly when it comes to keeping up with various interactions with multiple characters. Given that it was typical in older games, it’s not unreasonable to expect at least some dialogue – nostalgia can go so far, but modern twists are always nice – which makes it feel like more of a constraint than a conscious creative decision.

Visually, The Forbidden Arts doesn’t really do much to set it apart from other colourful platformers out there. The game does boast an impressive colour palette; developer Stingbot Games has doubled down on a particular colour in each world, which helps to set each environment apart and shake up the game’s aesthetic. Beyond that, though, The Forbidden Arts fails to reach any further. The 3D overworlds are barren and only provide a path to the next environment, and although each level boasts multiple paths like any good Metroidvania, you’ll see many of the same overused textures and level designs across each of the five worlds you’ll explore. Fortunately, the game itself runs quite smoothly, without a bug or frame-rate hitch to report on my Nintendo Switch. 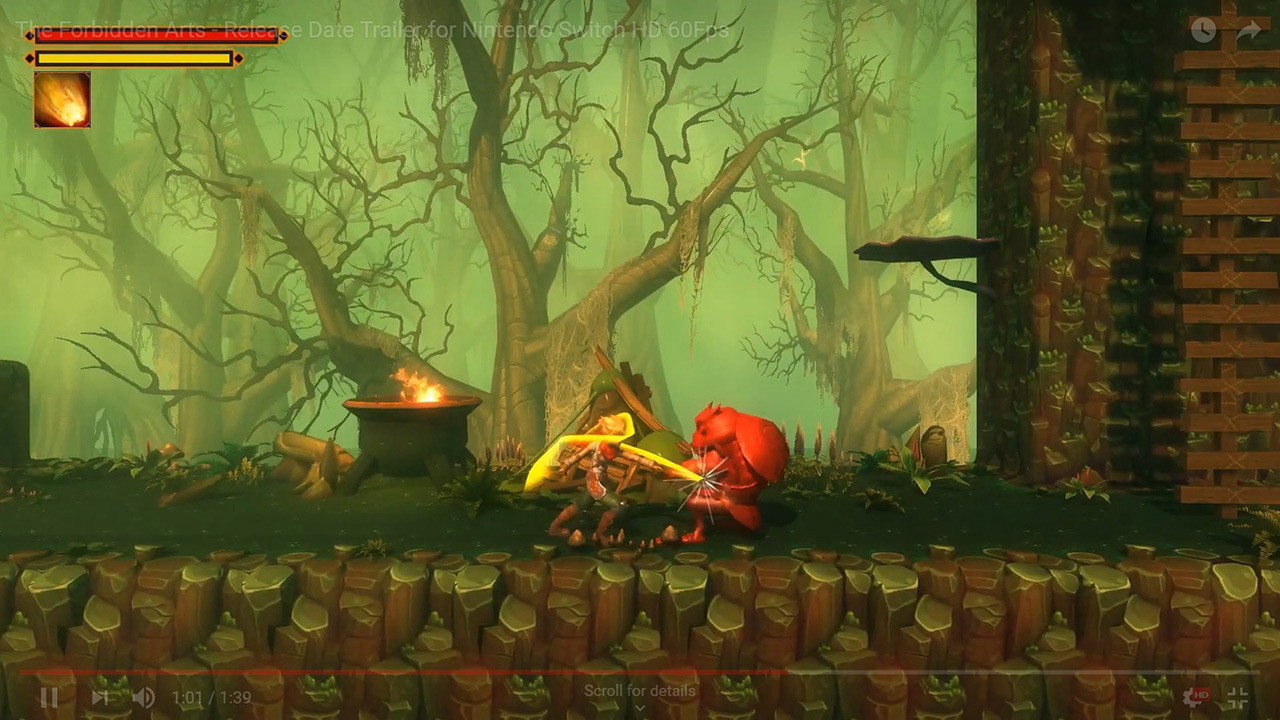 The gameplay travels slightly better, but only slightly; it’s competently developed, but the challenge rarely extends beyond button mashing and timing your double jumps. Although Phoenix wields a pair of blades, which made me expect some combos and more advanced manoeuvres, the entire combat system comes down to a simple button and leaves little room for any real creativity. On top of that, the enemies flinch after every successful attack, leaving room for another blow and creating a chain reaction that allows you to bludgeon them to deal with little to no push back.

Projectiles fare a little better, filling in the gaps in Phoenix’s arsenal by allowing you to launch fireballs at distant enemies and those smaller ones that aren’t susceptible to physical attacks due to some wonky-at-best hit detection. They do travel quite slowly, which makes it rather difficult to hit moving targets, but that’s all part of the challenge. Unfortunately, since the combat does only boil down to a couple of buttons and there’s no room to be creative, it’s often easier to just avoid the more difficult enemies and get where you’re going a little quicker.

Stingbot did add some variety when it comes to traversal, and although the aforementioned double jumps feel somewhat floaty, the ability to control Phoenix while he’s in mid-air helps with landing some of the trickier jumps. Similar to Ninja Gaiden, Phoenix can also use wall jumps in order to reach higher areas than he’d normally be able to; that all works fine and it’s fun at first, but the repetitive level design means that the mechanic quickly starts to feel overused.

The Forbidden Arts is a love letter to a simpler time, but repetitive gameplay and a story that doesn’t involve the player emotionally or intellectually unfortunately see that simplistic charm wear its welcome sooner than Stingbot Games would have hoped. That isn’t to say that it’s a bad game – it’s just average, doing nothing to stand out or keep the player invested for too long, and that’s a major flaw in this industry. Although the quality issues might come down to budgetary constraints, I can’t help but feel that The Forbidden Arts could have offered much, much more in terms of variety.

The Forbidden Arts is a nostalgic trip to a simpler time in gaming, but unfortunately it’s too simple to leave much of a lasting impression.