Catch ‘em all in your living room!

Pokémon is a series that has seen so much growth and evolution over its long and successful lifetime, and it’s been a fixture in so many gamers’ childhoods, but despite all of that evolution, one thing has remained constant: Pokémon has always been a handheld game. Ask any fan of the series and they’ll share memories of playing the games in the back seat of the family car, waiting to pass the next street light so that it’ll illuminate their Game Boy screen enough to play a little more. As fond as those memories might be, though, the series’ fully-fledged move onto home consoles has been long overdue. We’ve had the likes of Pokémon Stadium and Pokémon Colosseum, but it just hasn’t been the same. Now, for the first time since its inception in 1996, the mainline Pokémon titles are finally in our living rooms, on our TV’s and home consoles.

Pokémon: Let’s Go, Pikachu! and Pokémon: Let’s Go, Eevee! capitalize on the enormous success Pokémon GO has seen on mobile devices, and also take inspiration from Pokémon Red and Blue, creating something that will be a blast for newcomers, and fresh enough for the old timers that they don’t get by purely on nostalgia. It’s not an entirely faithful remake of our Game Boy favourites, but anyone who played the original 90s games will be able to jump into Let’s Go and immediately feel right at home thanks to the similar storyline. A 10-year-old child meets Professor Oak, who sends them off on an adventure across the Kanto region to collect as many Pokémon (or “pocket monsters”) and Gym Badges as they can on their way to the Pokémon League where they vie to become the League Champion. You’ve also got yourself a rival – although they’re more of a frenemy this time around – who will occasionally help you out in your battles against the nefarious criminal organisation, Team Rocket, which is once again determined on controlling the world’s Pokémon population for its own criminal gain.

The game is all but muscle memory for long-time fans of the series, who will probably be able to play it with one hand. What the game does have for its faithful fans is the whimsical nostalgia of exploring Kanto in the greater detail that the Nintendo Switch allows in comparison to Nintendo’s handheld offering. What should feel soullessly stale because we’ve experienced it now for the fourth time feels charming and delightful because we’re seeing our childhood come to life in the most playful way possible, with great detail and vibrancy. You can’t help but feel a sense of wonder seeing locations you first experienced decades ago beautifully updated with distinct character and a sense of scale; it’s a truly mesmerising sight and that sense of wonder won’t wear off throughout your whole playthrough

With that being said, it’s really the simple things in Pokémon: Let’s Go that will keep you grinning throughout. Random character classes have a stronger and more defined sense of personality, and fan favourite characters like Blue and Team Rocket’s Jessie, James and Meowth are more involved than they’ve ever been and have an added level of shine to boot. The Switch’s greater capacity for detail also means that battle graphics and animations have been refined; Flamethrower now looks like an honest-to-goodness flamethrower, for instance, and Hyper Beam actually looks like the devastating beam of pure destruction that it is. The generic battle backgrounds have also been replaced with the actual location you’re battling in – places like Nugget Bridge and Route 12 are easily distinguishable in battle.  It’s truly an accomplishment that Game Freak has managed to make even the minor details and mechanics of a game that’s more than two decades old feel refreshed and new. 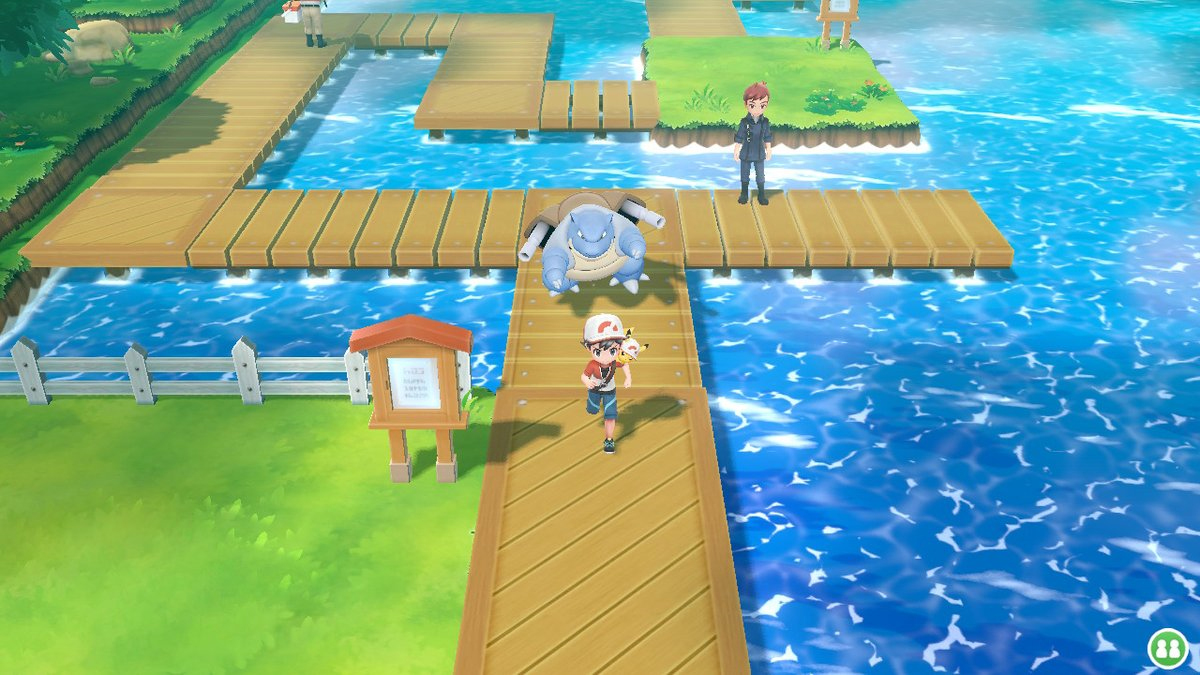 Although the details and mechanics are much improved, there are some major changes to core principles that may divide long-time fans. It’s been no secret that the Let’s Go games were designed with a younger audience and a potential new generation of fans in mind, and it’s very apparent immediately when you realise that the wild Pokémon battles have been entirely removed, replaced with Pokémon GO’s wild encounters, right down to the fact that the encounters aren’t random any more. On one hand, it’s almost liberating that you no longer have to deal with the abundance of needless random encounters you can’t wait to run from (goodbye Rattata and Zubat), a welcome change that cuts down your travel time significantly. On the other hand, though, the ability to encounter and battle wild Pokémon has always been one of the series’ defining characteristics, and so its removal makes Let’s Go feel less like a Pokémon game. A nice middle ground between the two mechanics would have been better to see.

The removal of the wild Pokémon encounters means, of course, that levelling your Pokémon up works differently. Trainers battles are the only way to level your Pokémon up through battle, and most of the levelling and grinding that you’ll do (which isn’t much) happens through capturing Pokémon – especially duplicates. EV training is all but gone as well, replaced with Pokémon GO’s candies: you receive a candy for every Pokémon you transfer to Professor Oak, which you can then use to boost your chosen Pokémon’s stats As an extension of this, all experience points are spread amongst your team equally, making leveling up very quick and easy, and trainer battles almost a non-challenge.

The Nintendo Switch’s co-operative features also allow for a second player to join your game with a second Joy-Con, aiding you in two-versus-one trainer battles and helping you catch wild Pokémon. Of course, the second player is quite limited in what they can do: they’re forced to follow the primary player and are automatically teleported back to the primary player if they fall too far behind.

Truthfully, all of this makes the playing experience much more casual and laid back – you can play Pokémon: Let’s Go whilst watching a movie or reading a book, without having to pay too much attention. The game being far too easy could rub experienced fans the wrong way, but again, we were warned that its target audience was for younger people, and the traditional Pokémon experience that many will crave is on its way later this year. 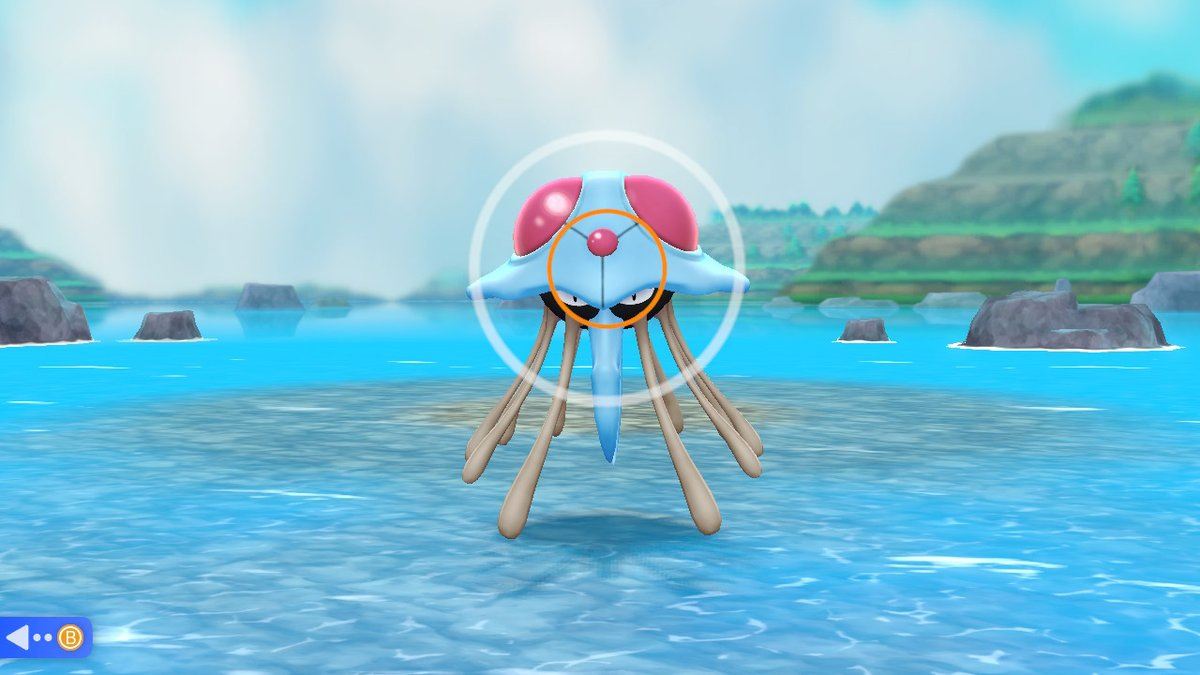 With all these changes to the washed out core mechanics we’ve come to know and love, and the game being obnoxiously easy, you’d assume that it wasn’t rewarding, but it’s actually a delight to from start to finish. Sure, the rewarding satisfaction of all the time you spend grinding and leveling up a rare team of Pokémon isn’t quite there – but the sheer satisfaction of revisiting the Kanto region in such a thrilling and refreshed fashion will keep you feeling a childlike sense of awe and wonder for the entirety of your adventure. Yes, it’s geared towards a younger, newer audience, but it will more than suffice for fans of all ages as a stopgap before the eighth generation title we’re so looking forward to.

Pokémon: Let’s Go is a pair of delightful and charming games that will give you a rush of nostalgia while also debuting new concepts and ideas that could easily be incorporated into future games. Although they are clearly geared towards a younger audience with the highly decreased difficulty and lack of material for competitive gameplay, there is fun to be had here for fans of the series of all ages, both old and new, and they’re a successful first step into home console territory.