Before souls were dark and blood was borne, FromSoftware was better known for its series of mecha games: Armored Core. Maybe you’ve seen, or even played one of them in the twenty-two years the series has been around. It should come as little surprise, then, that the developer released the odd mecha game besides this main series, and thus came Metal Wolf Chaos. Initially released in the dark old days of 2004, it’s an irreverent game with an oddly prescient narrative and a curious history that, all things considered, still stands up remarkably well today. It certainly shows its age in many ways, most often in how it plays and the ways it executes its design. However, if you’re willing to put on the rose-tinted glasses, and allow your expectations to slip back to a simpler time, there’s still a lot of fun to be had with Metal Wolf Chaos XD. 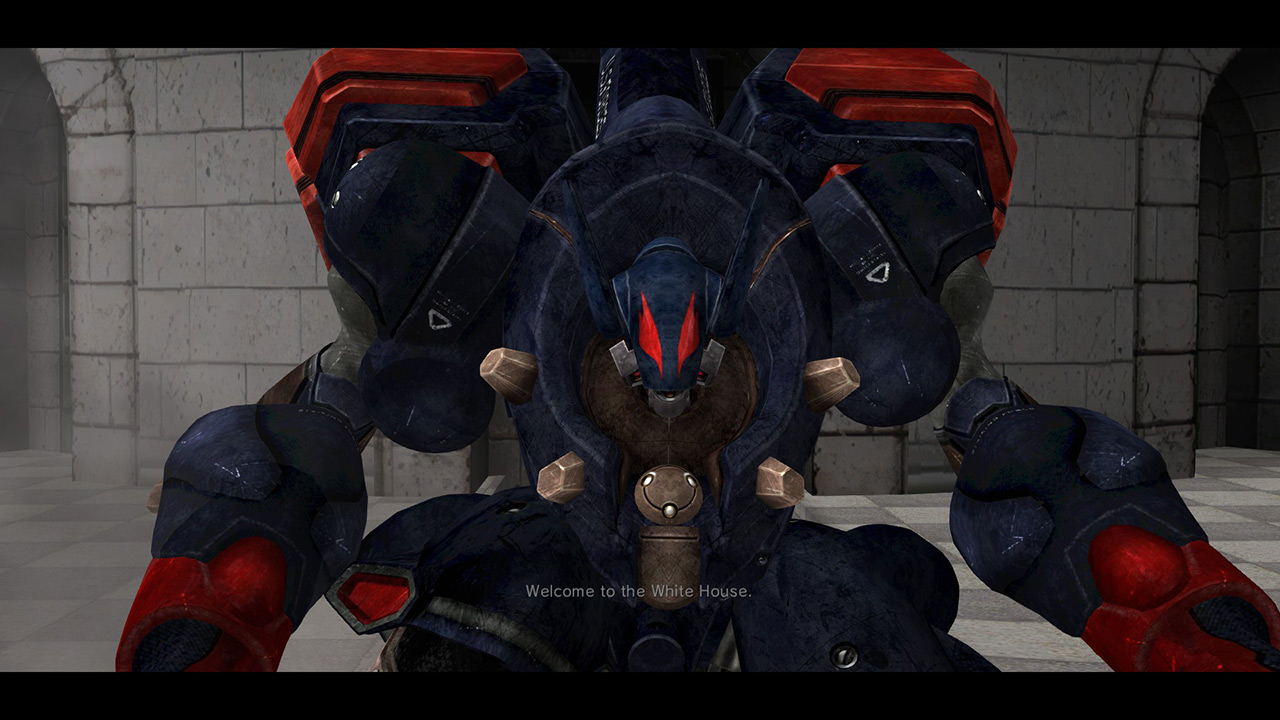 Before we get into the good bits, be warned that there are design tropes very typical of the game’s time that can make it difficult to enjoy for those who’ve got the patience of a Monster-drinking tween. When considering Metal Wolf Chaos‘ gameplay, it’s difficult to separate it from the story. I mean that literally. Each mission is frequently interrupted by small cutscenes that take focus, and cancel whatever action you were in the middle of at the time. The controls are not the greatest at the best of times, and at worst feel like you’re piloting a running washing machine filled with bricks. There are no checkpoints, so dying means starting each level over again, and there are plenty of ways to die a cheap, unavoidable death. Things like this are to be expected, however. After all, the game is fifteen years old at this point, and XD is just a remaster, not a remake. None of this is to say that the game is terrible… I mean, it is, but it’s more than just “so bad it’s good.”

The narrative and dialogue are arguably the real draw cards here, setting things around 2025 with a prediction of the United States’ future that’s uncomfortably close to our reality now. Framed by an increase in economic tensions due to the exhaustion of fossil fuels, a rise in domestic terrorism, and civil unrest over immigration issues, it seems like FromSoftware saw the Trump presidency coming from nearly two decades away. Minus the mechs, of course, which sadly makes Metal Wolf Chaos‘ timeline somewhat better than our own. Let that sink in for a moment. The response to this situation is a mecha-based civil war between 47th U.S. President Michael Wilson and his Vice President Richard Hawk, the latter of whom leads the coup d’état forces. Michael Wilson, however, is a man for whom every threat is no threat at all, and the reason is always because he’s the President of the United States. I’m not kidding. That exact line gets thrown around constantly. If you squint hard enough, you’ll see something akin to self-awareness. What ensues is the President throwing out pithy one-liners while he demolishes his way across the US, likely killing as many people as he “saves.” The entire time, you’ve got your cheerful-yet-sadistic personal assistant, Jody, egging you on; she ping-pongs between giving you advice or warnings and gleefully demanding the destruction of American landmarks. 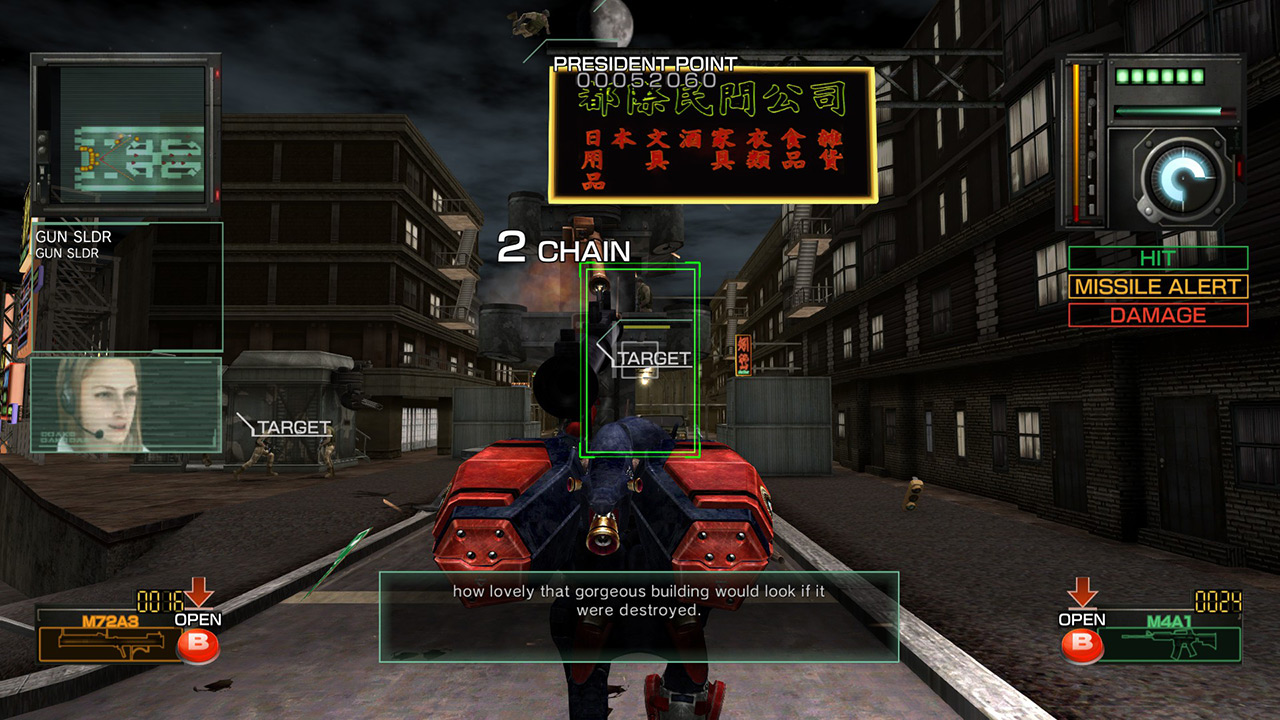 Sure, this might sound like your average Roland Emmerich-esque action movie romp, but the context of the game’s release is important to keep in mind. It was developed exclusively for the original Xbox and was only ever released in Japan, but its dialogue is entirely in English. All the audio you hear in Metal Wolf Chaos XD is the original audio from the first release, unaltered and dropped straight into the remaster; that’s because of how many times the President says that the reason is because he’s the President of the United States, and that won’t make sense unless you’ve played the game. Given the year of its publication and the time during which it would have been developed, it’s hard to know if this was a genuine parody or just FromSoftware’s view of where things were headed. Thinking about it, it wasn’t too far off apart from the mechas – though we’ve still got roughly six years to go, so we might be in luck(?).

There’s more going on than just the narrative’s “so hilariously bad it’s good” B-grade appeal, though. The game references events – such as the Arizona Insurrection and Wilson’s military history – that it never fully explains, but that play a large role in the story, with insinuations of a darker timeline than what’s presented. I wouldn’t go as far as saying that this is Dark Souls levels of buried lore and hidden story, but it’s clear that FromSoftware was trying its hand at such things long before the bonfires were lit. Besides that, however, the game is also just an excellent American geography lesson, as Jody will cut in with out-of-nowhere exposition about the locales you play through (as you’re busily destroying them). That’s… Basically it. The game finds more ways to continuously escalate the stakes, there are just oodles of weapons to surpass Metal Gear, and the entire game is gloriously stupid. Your mileage will vary depending on whether or that’s your kind of thing but, personally, I’m into it. If you’re coming into this expecting the kind of challenging gameplay FromSoftware is known for these days, then… Don’t.  Putting the foibles of 2004 games development aside, Metal Wolf Chaos XD is what you play when you want to have some stupid fun. As it happens, destroying everything in sight with an arsenal of ever-increasingly powerful weaponry while riding around in a one-man mech can be a pretty good time. Nothing will ever pose a real challenge and that sort of makes sense, considering the omnipresent theme of “America! Fuck yeah!”

This goes double for New Game+, where you’ll take the most overpowered end-game weapons into the first few levels and decimate everything in sight. Obviously, the only thing that should be able to take on and defeat America is the most American American that ever American’d, which is the President of the United States of America in a mech suit. It sounds like I’m being sarcastic, but that sentence alone could easily serve as both a general synopsis and a quick summary of the dialogue script.

As a remaster, Metal Wolf Chaos XD is… Okay. The visual update is really just a new coat of varnish over the old models. There isn’t much more to say other than if a proper remake (or, God willing, a full-blown sequel) were to ever be made, I’d hope that it’s called Metal Wolf Chaos XS. There are a few choice moments and some hidden goodies that I wouldn’t dream of spoiling here, and they’re worth giving it a second go-around if you get through the first. That said, you only need to watch the trailer to completely understand what this game is about, and it’s fantastic for so many reasons, I can’t recommend it enough. Go play this oddity in gaming history, and be amazed that it wasn’t released in the West sooner than it was. And the reason is…!

As a remaster of a 2004 release, Metal Wolf Chaos XD definitely shows its age. If you’re willing to reduce your expectations and just go back to a simpler time, though, there is a lot of fun to be had with it.

A player of games and writer of words, Frank enjoys himself most while playing stuff most consider to be terrible. He loves games that are strange and unusual and that definition can, at times, be pretty wide. He'll also play anything at least once.

[…] Frank Watts made his Doublejump Debut™ with a review of the wanton destruction simulator known as Metal Wolf Chaos XD. […]