It seems somewhat ludicrous, three movies in, that the John Wick franchise has only now received a mainstream tie-in videogame. Sure, there was the VR John Wick Chronicles game that came out a couple of years back, and the laconic assassin’s cameos in Payday 2 and Fortnite, but there’s always been the nagging feeling that this most videogame-friendly of franchises still needed a real game of its own.

Thankfully, IP holder Lionsgate and publisher Good Shepherd Entertainment played the long game, eschewing the more predictable AAA route and going for something a bit different. Thomas Was Alone/Volume creator Mike Bithell, having previously pitched a tactics-based take on the franchise, got the job of bringing his vision of “John Wick chess” (as described by Bithell himself) to life.

John Wick Hex succeeds by sticking to the core of the films themselves: Wick’s mind, that almost computational quality by which the character can wipe out a room’s worth of thugs through constant movement, constant observation and constant reaction. It does this by placing the action on a hex-based grid, conforming to a linear timeline that progress one second at a time. This isn’t turn-based — your enemies are moving and attacking at the same time — but a similar kind of staggered flow to Superhot. 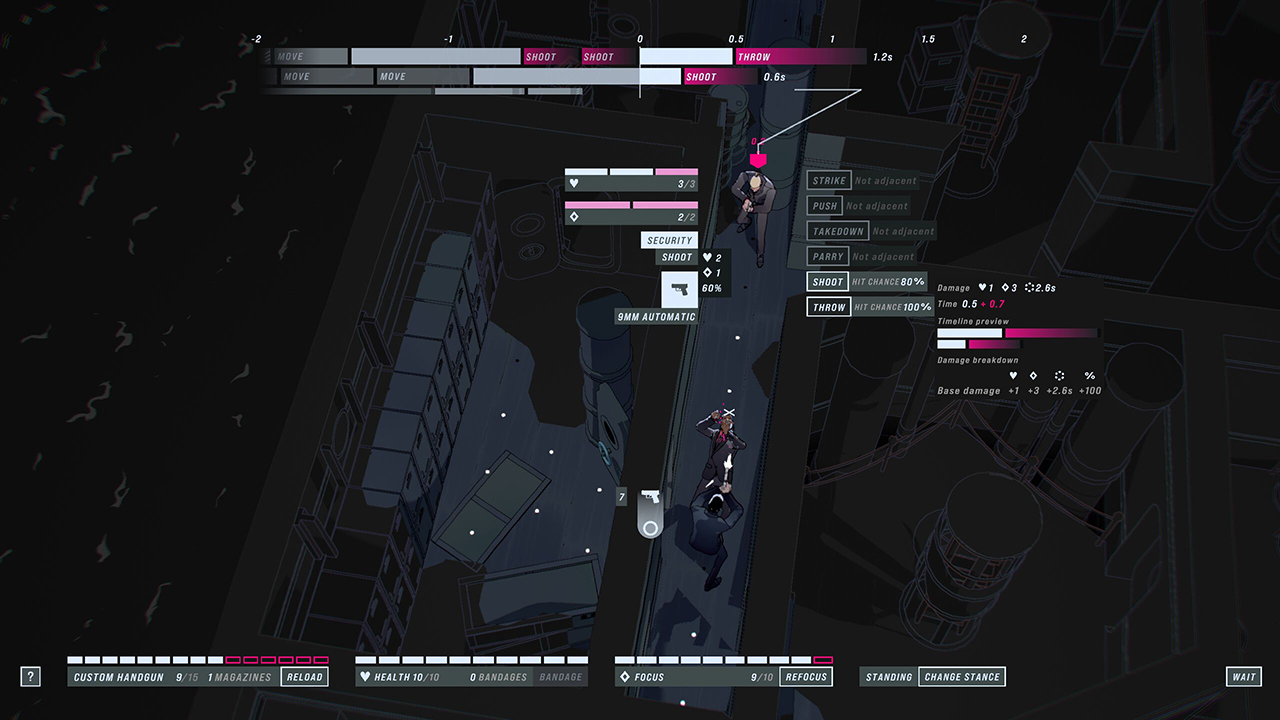 Learning to use the timeline is the key to success in John Wick Hex. Each action at your disposal — offensive, defensive or movement — has its own time to execute, which is shown on the timeline along with the timing and duration of whatever actions your enemies are taking. It’s not always about taking everyone down efficiently, but making moment-to-moment choices that prevent an enemy getting the drop on you.

On top of that, you also have a focus meter that depletes when performing melee attacks — and with most of the game’s encounters taking place at close quarters, you’re going to be doing a lot of that. The more focus you use, the lower your shot accuracy gets; you can replenish focus, but only by taking a second to shake off the cobwebs, a second of potential vulnerability if not used with caution. Even taking cover comes at a risk, with a fog of war mechanic severely limiting visibility.

It’s an intense set of mechanics that takes a while to grasp, but once it clicks it succeeds in putting you in the character’s mind, or at least that of his creators. A good stage run makes you feel like a Hollywood fight choreographer as you make Wick dart back and forth between enemies, dodging, performing bone-crunching takedowns, popping off headshots before slipping into cover. Considering just how crucial the choreography is to the film series’ appeal, this alone demonstrates just how in-tune Bithell is with the source material. Although you may have a slick and exciting time, don’t expect it to be easy. Bullets run out quickly, requiring you to grab the weapons of downed enemies, and health can only be replenished with extremely scarce bandages. You can use coins earned in-game to purchase perks and seed upcoming areas with extra bandages, but what you have on you remains persistent throughout the multi-stage areas, meaning that it’s entirely possible to go into a stage with almost zero health, and no bandages stored. Often, it’s advisable to replay a stage at the end instead of progressing, just so you can try again and come out better prepared for the next stage.

It’s certainly challenging, and mostly in a good way, but if there’s anything about John Wick Hex that feels like it could do with a bit of tweaking it’s the scarcity of its resources. Stinginess is one thing, but having to replay freshly-beaten stages just to have a chance of surviving the next one can get frustrating. It feels like a game where they put in Normal and Hard (here, a mode where moves are on a timer), but didn’t get around to putting in an Easy mode. 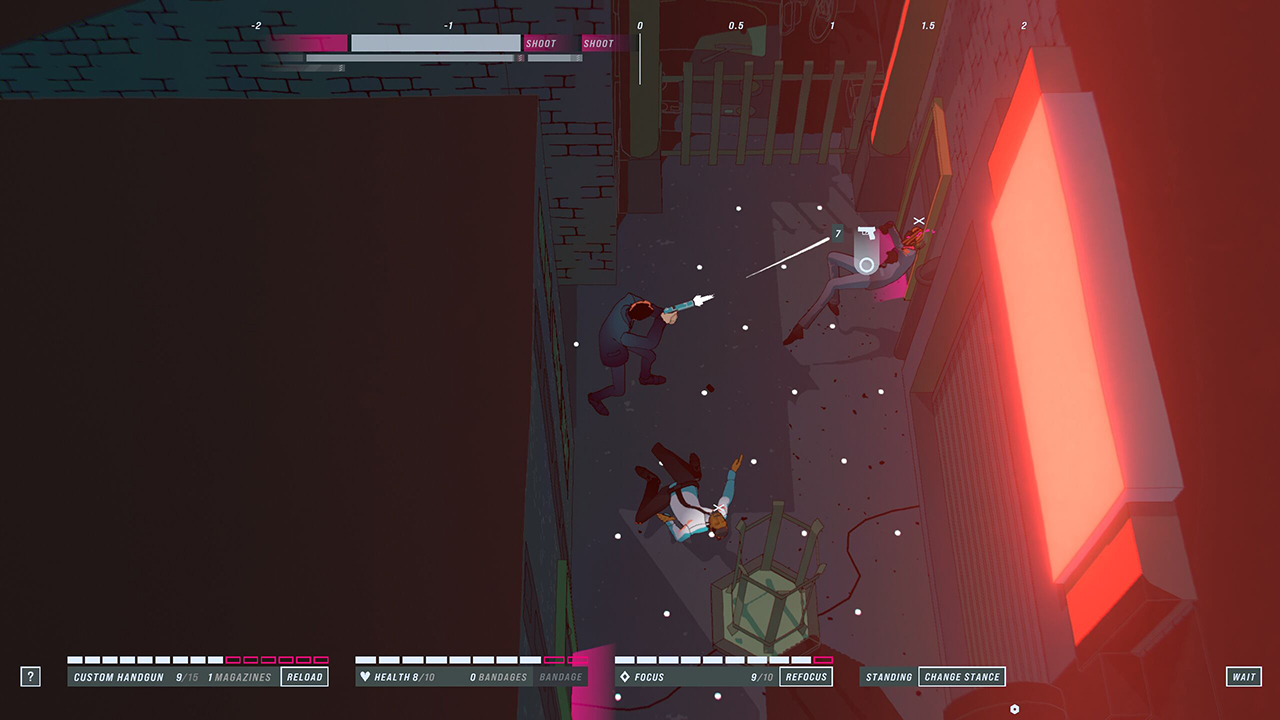 Fortunately, John Wick Hex is as fun to play as it is maddening. The tactical layer is deep enough that everything still feels urgent, despite the fact that you spend most of your time with the action paused, and the constant need to adapt based on ever-changing time constraints makes you feel like a full-bore murder god when you get it just right. At the end of every stage you can also watch a cinematic replay of the action which, being based on in-game animations stitched together, looks a bit clumsy unlike the graceful, fluid action of the films, but is close enough to still be enjoyable.

It helps that the game’s a looker, too. Its stylized, noir graphic novel-style aesthetic fits perfectly with the tone of the franchise, with a moody cleanness that doesn’t interfere with the extensive but wholly functional UI. Sound is similarly sparse but effective, with Austin Wintory’s music doing a fine job of providing a twist on the film scores’ unique style. Voice acting fans are also in for a treat, with Ian McShane and Lance Reddick reprising their roles and both sounding fantastic. Interestingly, the only weak link is Troy Baker, whose rather hammy performance as villain Hex occasionally grates with McShane and Reddick’s more measured approach. Stark, methodical, and occasionally inscrutable but at the pinnacle of execution, John Wick Hex has been built in the image of the Boogeyman himself. A treat for fans of the films and tactical combat games alike; just make sure you bring your brain — and a little patience — to the gunfight.

[…] entered the mind of an assassin as he reviewed John Wick Hex, which he found to be “a treat for fans of the films and of tactical combat games […]