More of an homage than a parody

Ion Fury is an excellent game that has its flaws, but those flaws are highly dependent on your personal views, sense of humour, and whether the actions of developers will impact what you think of their game. It follows a recent trend among some developers of emulating those 3D shooters of old, using 2D sprites and a beefed up version of an aging engine to do so much more with that idea. On the one hand, it perfectly emulates those games, attitude and all, and does so with aplomb. On the other hand, those exact same points but in a modern context of 2019 and a shift in social views since the last time these kinds of games were in vogue. I personally think it’s excellent, but your mileage may vary.

Players take on the role of Shelly “Bombshell” Harrison, a bomb disposal expert in the Global Defense Force and, no, that sadly doesn’t tie this game into the Earth Defense Force series of titles. I checked. The role of Dr Jadus Heskel is played by none other than Jon St. John, cast as a villain this time around and turning his misogynistic and condescending commentary toward evil instead of the… Good(?) it was in Duke Nukem. That’s all you really need to know about the story since it’s hardly the draw point. Much like its spiritual predecessors, we’re here for the action and that sweet, sweet pixelated ultraviolence. 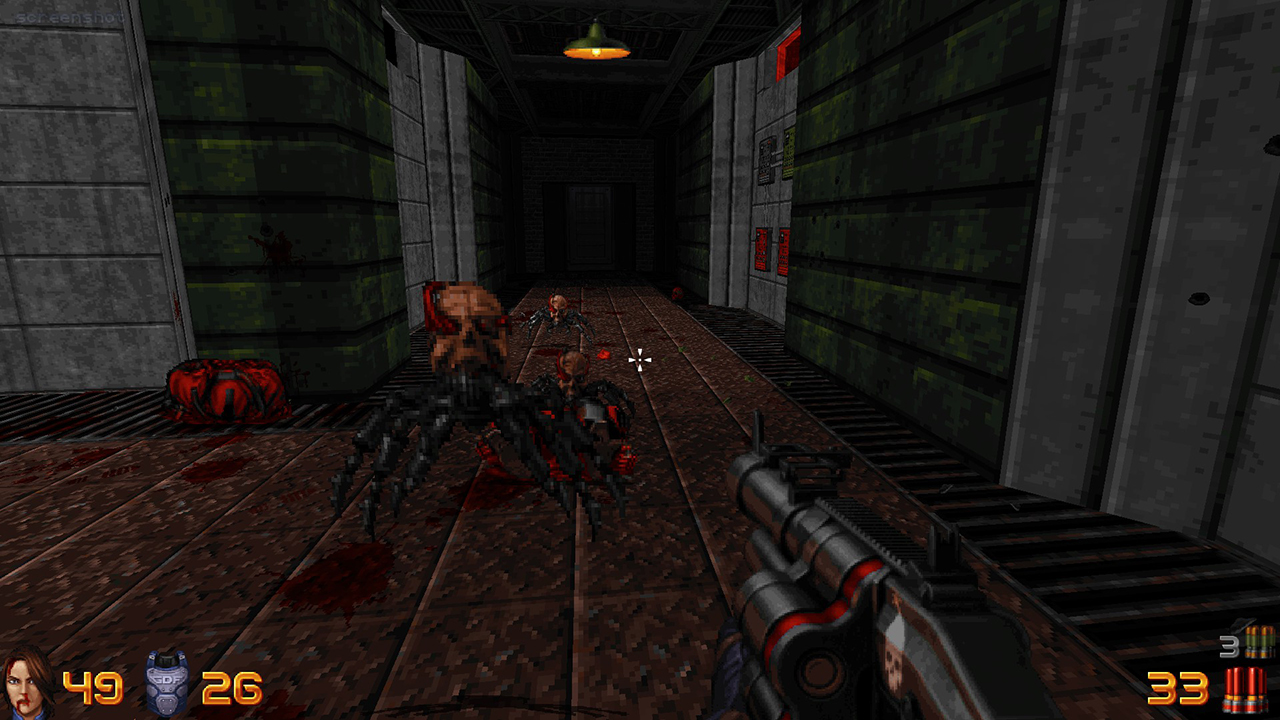 The game is often described as a parody of the Duke Nukem-era shooters of old, but that’s not entirely accurate. Sure, certain aspects lampoon the over-the-top revelry in both ultraviolence and hyper-sexuality that those games could be known for, Nukem especially, but the attention to detail in creating a refined version of the games that inspired it makes it more of an homage. Its tongue-in-cheek humour isn’t the point, but one aspect of the overall package.

Yes, this includes things like the “Ogay” soap ads, but also the “Pigs are cops” slogans painted everywhere. In case it had escaped your attention, this game’s idea of jokes take aim at several different things and demographics. It does so with the same childish humour of the older titles that it’s trying to emulate. While some will love it with the juvenile maturity it was clearly intended for, others will take it too seriously like it’s somehow trying to incite something, and others still will gather an internet hate mob over it. As I said, your mileage will vary depending on where you stand on the “who can make jokes and about what,” argument. For what it’s worth, I chuckled my way throughout and don’t hold animosity toward any group of people at all as a result.

The focus on design goes beyond these crude trappings, which really are just window dressing to the main event: shooting monsters and/or bad guys of some kind in the face. Repeatedly. Until pixelated blood explodes across the screen like gory fireworks. Or hunting through each level for secret rooms, hard-to-reach equipment, or just weird little things. Maybe there’s a joke better than Ogay to find, but nobody knows for sure. It’s a secret to everyone. It’s the other thing these games were once known for, hiding things around the place behind puzzles, some of them quite elaborate and, for the most part, they’re a lot of fun. It also speaks to the overall quality of the level and world design, which is fantastically grim with a satisfying AD2000-esque flavour.

If there are criticisms to level at the game, it’s in some of the weaponry. The default pistol – the “Loverboy” – is such an excellent starting point. Powerful, and putting out a lot of “oomph,” falling back on this first weapon doesn’t feel like the last resort that others of its ilk from older games do. Instead, you get a sense of having a boomstick that can put a sufficiently sized, but grizzled hole into each and every one of your enemies whenever you pull that pistol out.

Unfortunately, that same sense doesn’t carry forward into the rest of the weaponry. For example, the Shotgun, which is also your Grenade Launcher, with neither function feeling completely fleshed out to act as one weapon. It’s not that they can’t put out a lot of damage, but that they do it in the weediest ways possible. The shotgun blast looks and sounds lame, the grenade explosion sounds muted and a little on the small side, and the way it comes across is merely efficient. In a game such as this, “efficient” is not enough when the golden rule is the “Rule of Cool.” This is something that can be said of most of the arsenal and, if that’s the only criticism I can bring to this game, you know it’s otherwise a pretty great time.

Ion Fury is a game that knows what it’s about, a polished version of the very best of yesteryear with the right attitude to boot. That attitude might be disagreeable to some; however, this is far from a game that should be taken as seriously as to believe it has a stance on social politics. If you can keep that under wraps, then it’s a great little homage to the titles that were once kings of the industry and maybe, just maybe, you’ll have a bit of fun.

A player of games and writer of words, Frank enjoys himself most while playing stuff most consider to be terrible. He loves games that are strange and unusual and that definition can, at times, be pretty wide. He'll also play anything at least once.

[…] had a blast while reviewing Voidpoint’s 90s throwback shooter, Ion […]