Although Hitman is quite a venerable series, spanning eighteen years and six games (eight if you count mobile versions Hitman Go and Hitman: Sniper), most would agree that it was with 2016’s episodic soft reboot that it finally found its stride. While the earlier games have their fans, especially 2006’s Blood Money, Hitman 2016 finally saw developer IO Interactive find a balance between the series’s puzzle-like improvisational assassination, and a level of accessibility to draw in players of all levels.

Two years later, we have Hitman 2 which is mostly more of the same. Same engine, same mission structure – even the menus are more or less identical to the previous release. While this counts as a negative for most franchises, in Hitman 2 it’s the result of an already incredibly strong foundation getting tweaked to near-perfection. 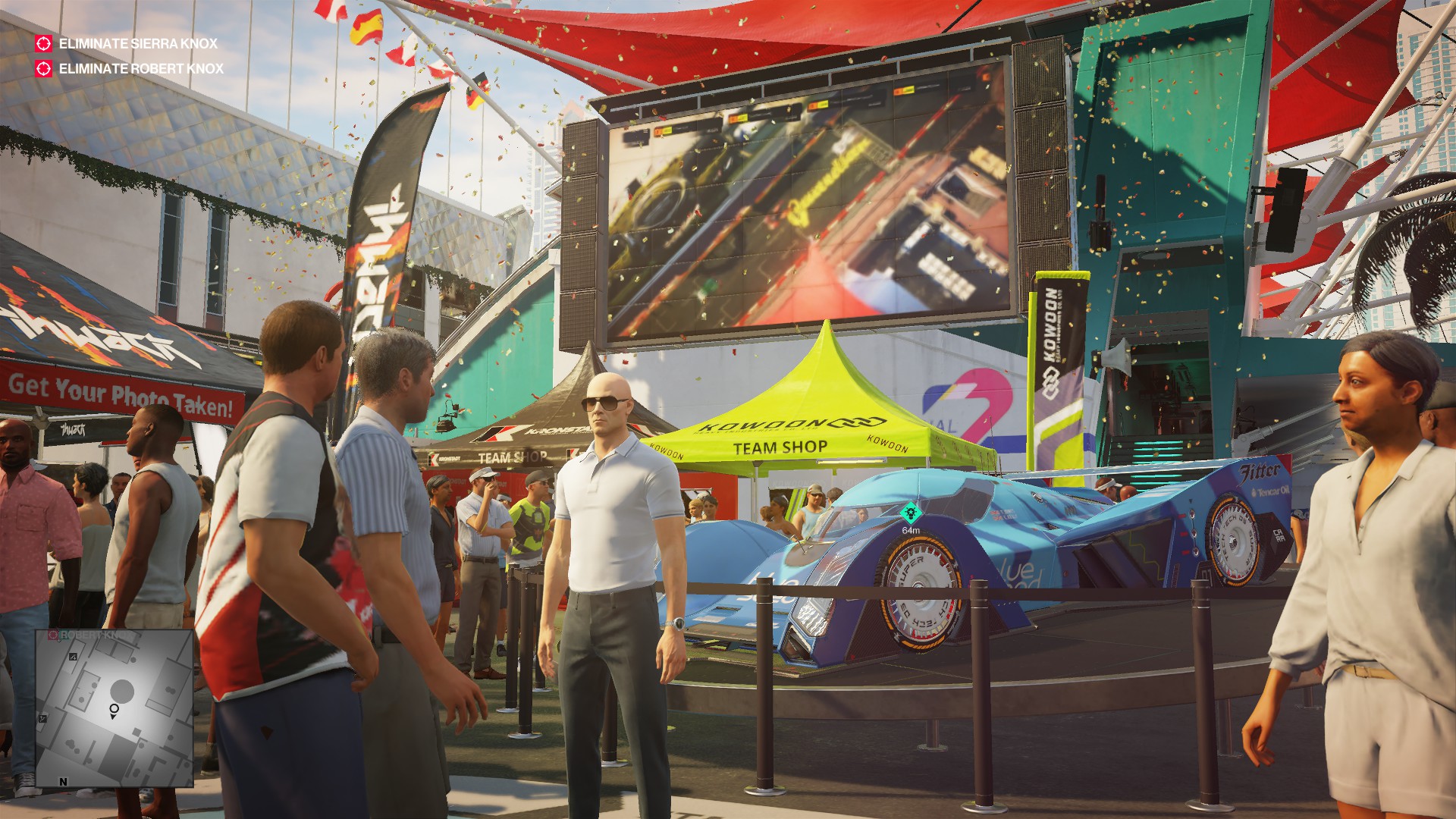 As with the 2016 release, you play as the indomitable cloned assassin Agent 47 as he unveils a global conspiracy, while learning the truth about his past by way of killing all manner of nasty folk in a plethora of inventively crafty ways. Despite looking like your average third-person action affair, Hitman has always been an exploration/puzzle game at heart. Each environment is an intricately-crafted Rube Goldberg machine of human activity, your job being to observe all the cogs and find the best windows in which to dispatch your target(s).

Take the Miami level, set amongst a massive motorsport event which tasks you with taking out one of the drivers. Now, one perfectly viable way of completing the contract is to procure a sniper rifle, sneak to the top of a building overlooking the track and shoot her car as it goes past. That’s a perfectly practical approach that certainly works, but Hitman 2’s heart is in a decidedly more dastardly place. Maybe you’d rather disguise yourself as one of the pit crew, and sabotage the wheel of her car when she comes in to pit? Or perhaps steal a waiter’s gear, and poison the glass she’s going to use in a post-race drinking game? 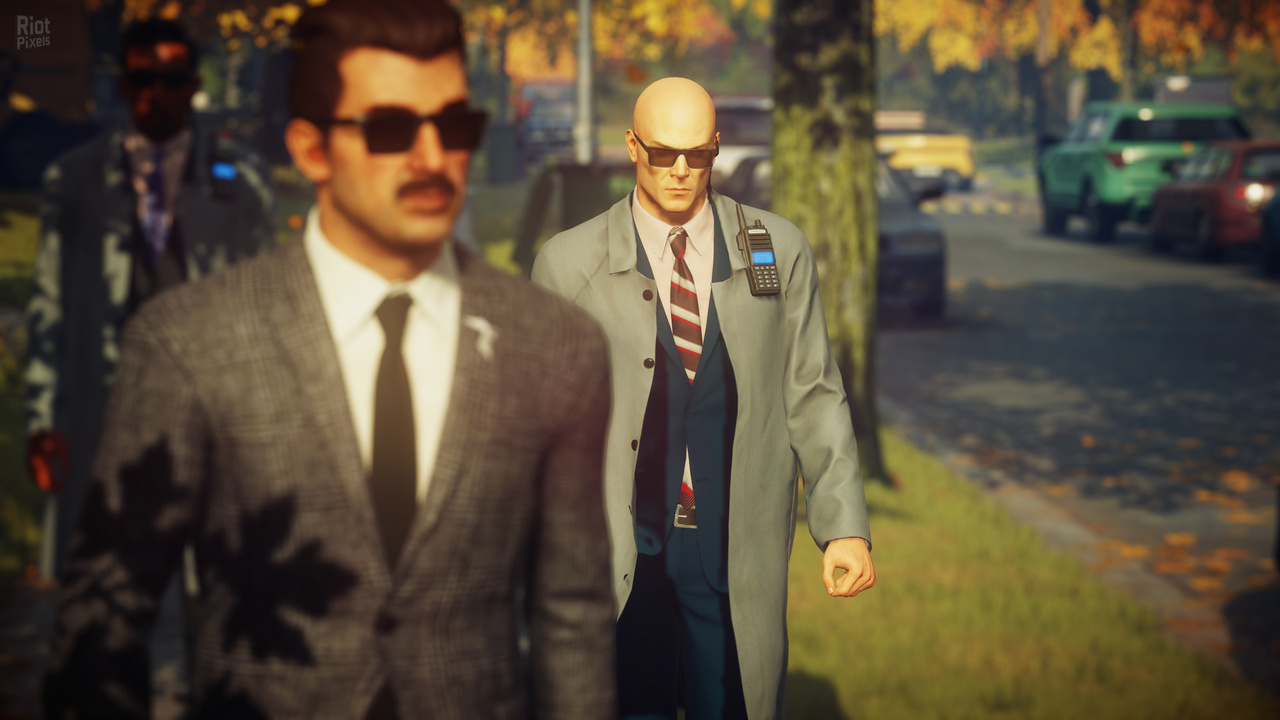 The above are examples of the game’s ‘mission stories’, checkpointed paths through the levels that direct you to some of the most creative and/or entertaining kills. Added to the franchise with the reboot, they not only help relieve a lot of the obtuseness of those early games (Though hardcore hitmen need not fear: they can be turned off) they also give IO the chance to craft bigger and more ridiculous assassinations than ever before. While Hitman has always seemed the most po-faced of grimdark franchises on the outside, it’s always had a morbidly goofy core, one in which Hitman 2 relishes. Whether it’s the drily amusing NPC dialogue, or the fact that they had the game’s first Elusive Target (targets who appear in limited-time community missions) played by none other than cinematic mortality specialist Sean Bean, Hitman 2 is a game that elicits almost as much chuckles as it does whitened knuckles, but always delivered with the straightest of faces. Many games could learn a lesson or two from this franchise on how to balance humour with grit. 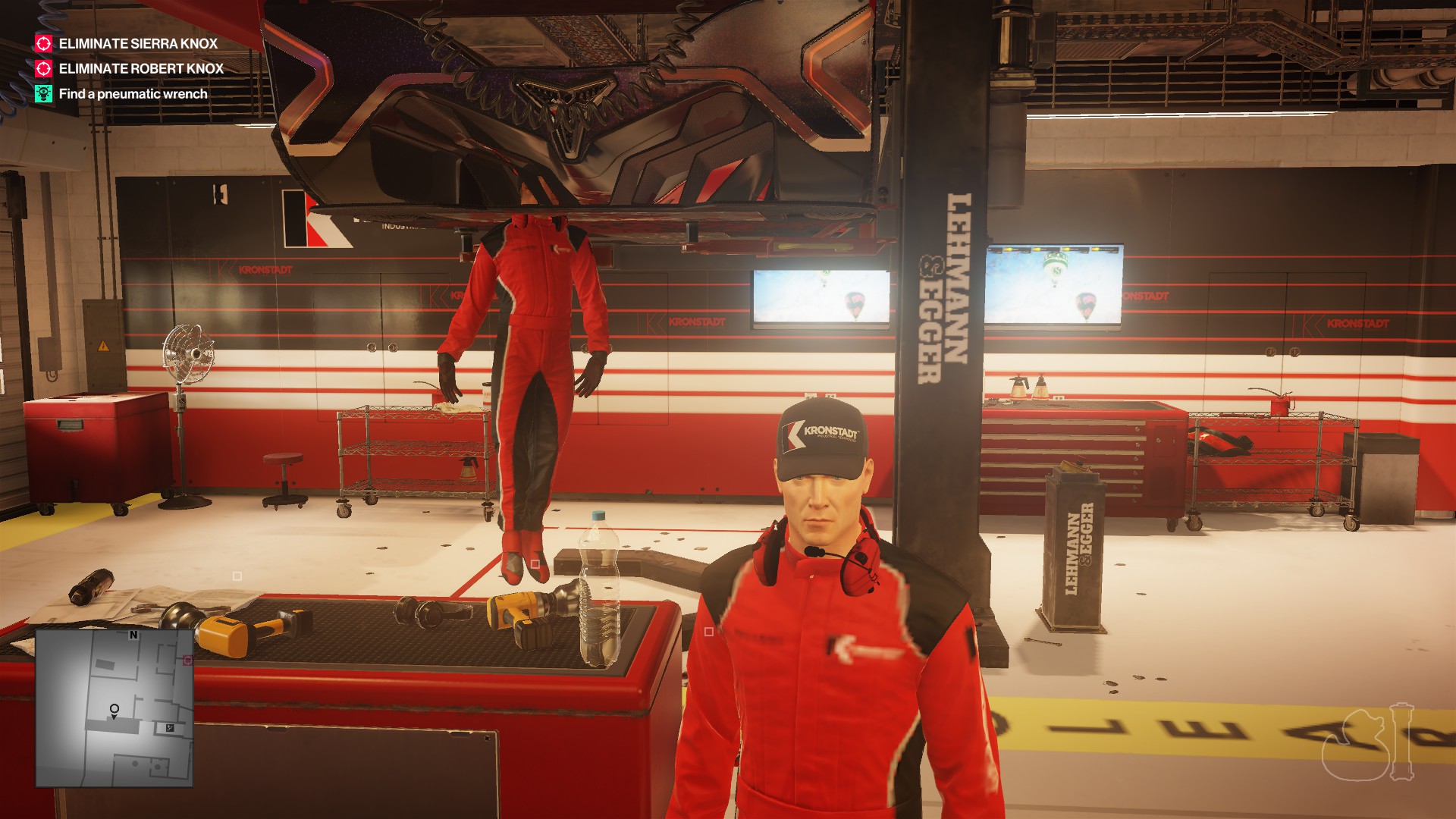 Apart from the main campaign, you also get the same additional modes as included in Hitman 2016. Escalations allow you to play through the levels with new targets, only with increasing amounts of restrictions that alter your playstyle. One round may only allow you to take out your target with a pistol, for example, or wearing a specific disguise. In the next, you might have to avoid non-target kills, or being caught by any security camera. Further variety comes in the Contracts mode, community-made missions that can be set up with similar restrictions.

With only five main locations (with a smaller, New Zealand-set level to make six) one might assume that you would burn out on the levels long before you finish the additional content, but that couldn’t be further from the truth. The levels are massive, combining several distinct areas, with often highly diverse environments, within the whole. Simply meeting the requirements of the campaign missions generally involve small slices of what the levels have to offer, and part of the fun of Hitman 2 is playing them over and over, learning new nooks and crannies each time.

Mastering a level becomes an art, achieved by much exploration over multiple playthroughs, and as with the previous game IO delivers some of the most consistently interesting and complex map design in the business. It’s not just about learning locations or handy assassination spots, but also getting used to the NPCs – who’s going where, and what outfits are they wearing that could be useful in your present circumstances. The feeling of plumbing into a location’s depths over time, gradually attaining knowledge that will serve you well for future playthroughs with different targets, creates a sense of satisfaction rarely-mined in these days when open worlds are judged by their scale and wideness, rather than how much is actually packed into them. 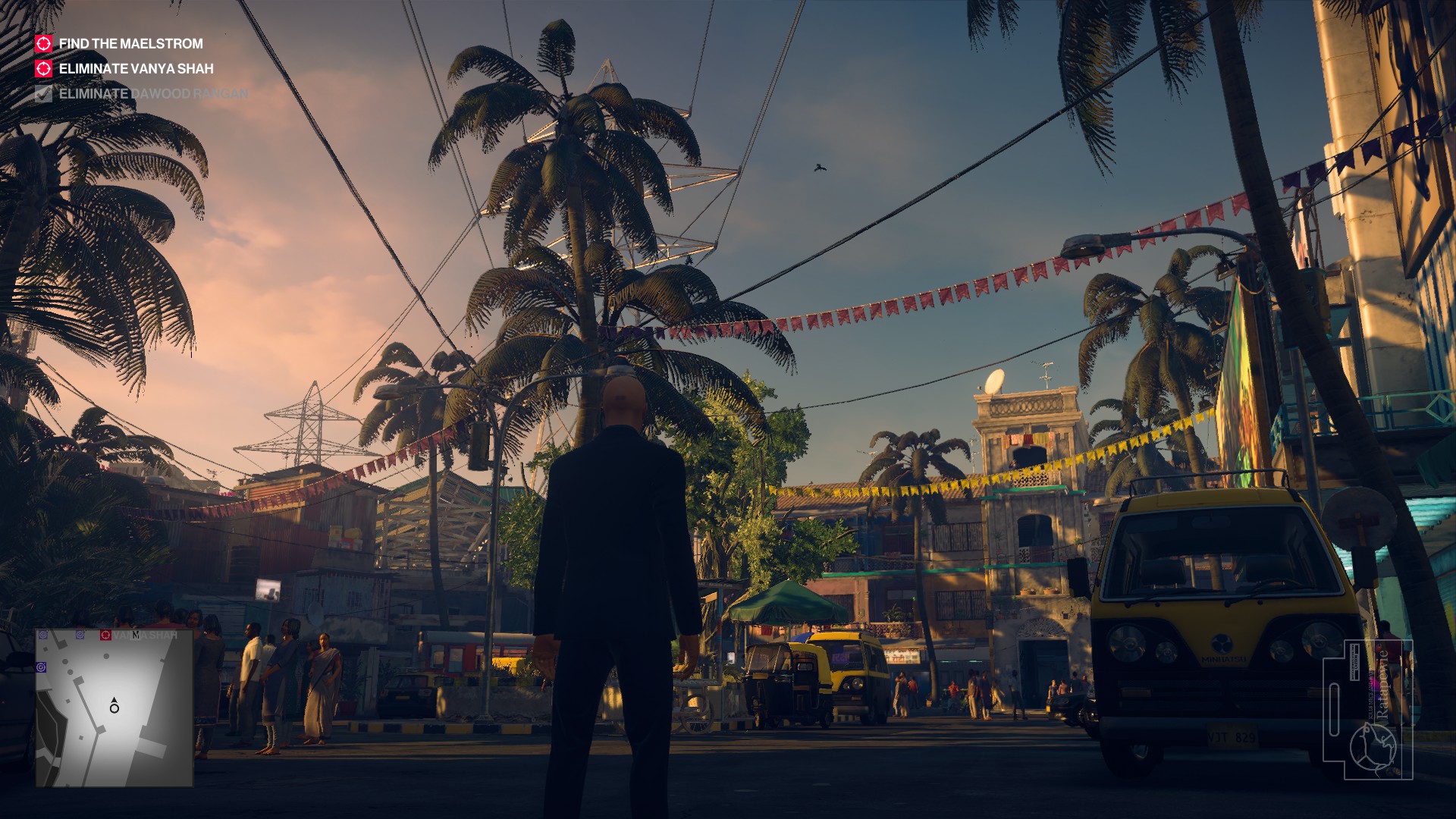 The mechanical additions IO has made to Hitman 2 are few, but key. The two main ones are the introduction of foliage and the ability to hide among crowds, Assassin’s Creed-style. While neither are exactly revolutionary mechanics, they add a huge amount of width to the player’s options, helping with traversing levels and avoiding trouble. Even more so than in Hitman 2016, it makes for a stealth experience that gives the player alternatives in tense moments rather than punishing them, and always giving you confidence that no matter how dire the predicament, there’s always a way out – provided you find it. Even in 2018, it’s still refreshing to see a stealth game that works through empowerment rather than crushing stress, and Hitman 2 does it better than anybody (that said, pro tip: NEVER run and gun. It doesn’t turn out well).

Hitman 2 also introduces multiplayer, with Ghost mode. This pits two players against each other to rack up the highest amount of killed targets in a time limit, with non-target kills reducing your score. It’s an interesting inversion of the standard Hitman gameplay, emphasising speed and risk-taking rather than methodical planning, but as a result feels a bit sloppier. It is labelled as a beta, so hopefully some tweaking will round it out a tad as the idea holds a lot of potential. To round out the package, we also get Sniper Assassin mode, inspired by the mobile game which cleverly takes Hitman’s clockwork sandbox approach and takes it long-range for solo or co-op play. 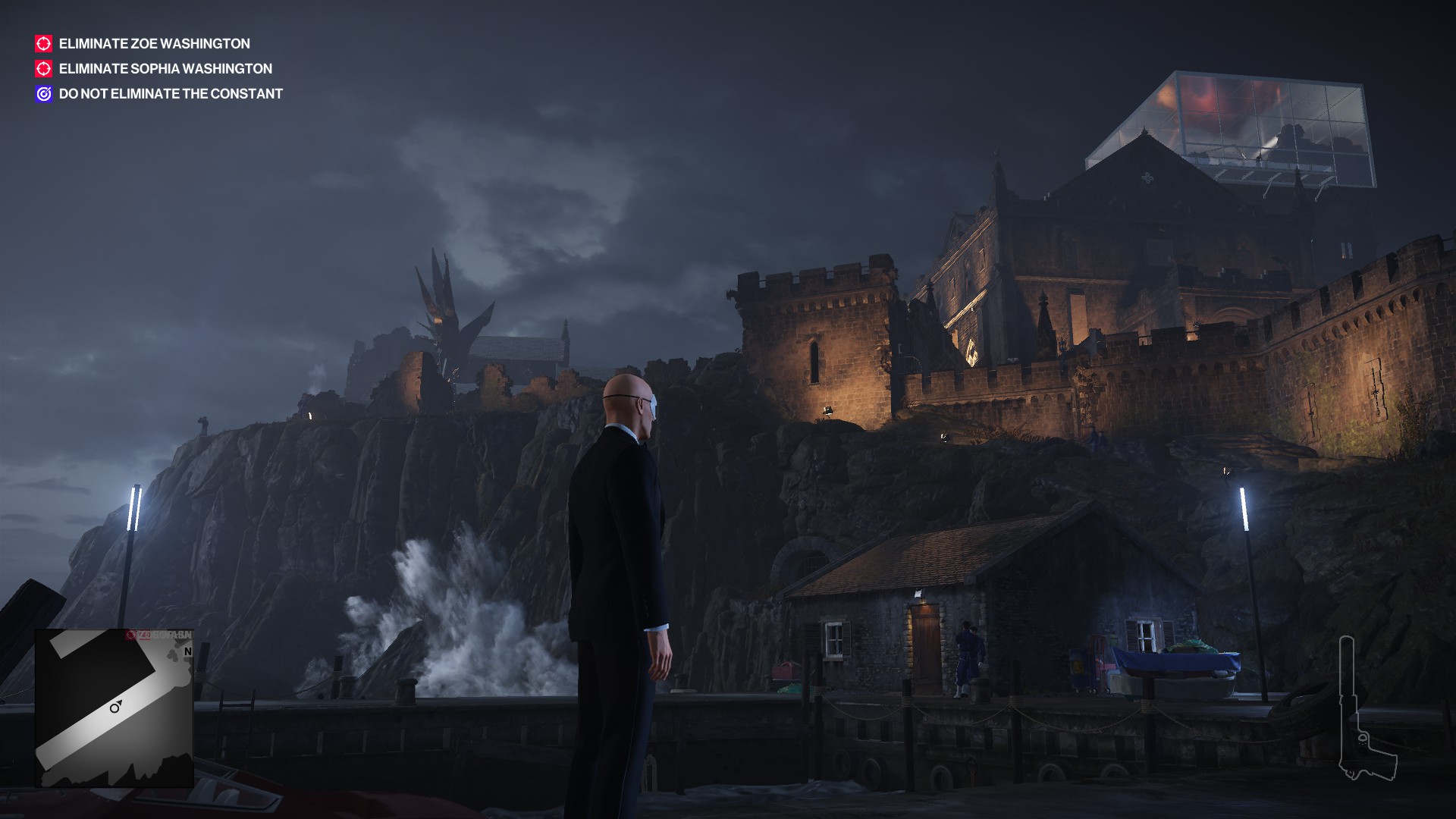 Now to something I’d normally never do: recommend day-one paid DLC. It’s usually the shittiest of cheap moves a publisher can pull, but Hitman 2’s Legacy Pack is a no-brain recommend to anyone who enjoys the base game.  It gives you all of the content from Hitman 2016 with levels updated with Hitman 2’s new mechanics and UI improvements, effectively doubling the size of the game for around AU$30. If you already own the previous game, you in fact get the Legacy Pack for free (Including the Patient Zero mini-campaign if you have the Game of the Year edition), but considering the quality of that game’s levels I’d say it’s even worth paying for.

Much like its protagonist, Hitman 2 achieves so very much while everyone is looking elsewhere. Tastes are unpredictable, no game is without flaw, and not every release is equal in that ever-fickle, ever-roaming public eye. At the end of the day, though, being able to say, “I smacked an arms-dealing race car driver in the face with a fish while dressed as a flamingo” is a special, beautiful thing in life that once gifted, can never be taken from you.

Hitman 2 is a rousing return for everyone’s favourite murder-baldy, and a serious contender for one of the best stealth games of all time.  Building on its superb predecessor in all the right ways, it offers some of the year’s most satisfyingly nefarious gameplay, and fun that’ll last you months.

[…] Interactive and Agent 47 are back for another round of silent slaying shenanigans in Hitman 2, with Cav finding it to be “a serious contender for one of the best stealth games of all […]

[…] you’ll have in your gaming life. I really can’t put it better than what I already said in my review: “Tastes are unpredictable, no game is without flaw, and not every release is equal in that […]

[…] really can’t put it better than what I already said in my review: “Tastes are unpredictable, no game is without flaw, and not every release is equal in that […]

[…] is based on IO Interactive’s game series of the same name, whose most recent entry is last year’s Hitman 2. Released in 2007, the movie itself arrived not long after 2006’s Hitman: Blood Money, which is […]