As more of a casual fan of rhythm games, Double Kick Heroes stood out to me amongst the crowd. At first glance, it seems to consolidate the flashy action of a side scrolling beat ‘em-up with the hypnotic fever of a rhythm game, presenting itself as a zombie brawler as much as it is a headbanging rhythm game. As your ragtag team of punks speed across the post-apocalyptic American wasteland jamming out to their own tunes, their modified Gundillac blasts lead into the faces of the zombie horde that scrambles behind.

Double Kick Heroes’ main draw is beyond super cool. Not only does it boast some seriously impressive pixel art, but the idea of rocking out to metal tunes while blowing apart zombie heads is as equally exhilarating as it is fun… It’s just unfortunate that what came across as a killer concept on paper didn’t pan out as promisingly as I would have hoped.

Simply put, Double Kick Heroes has a lot going on. During gameplay, the screen is split into two sections: the bottom fifth houses your typical rhythm game beatmap, while the rest of the screen is dedicated to displaying the rock-fueled action that’s playing out. The top four-fifths of the screen aren’t just for show, though; your Gundillac is fitted with a dual gunner set-up, so you’ll have to keep one eye on the road to watch for incoming zombies while the other stays glued to the bottom to make sure you don’t miss a beat. As zombies approach from the “top”, you’ll want to hammer the A button to fire your uppermost gun, whereas zombies approaching from the “bottom” are better suited to the bottom gun, which you fire using the B button. Mixing in an upgrade system that sees your guns turn from rinky-dinky pistols to mighty cannons as you consecutively hammer more “perfect” notes, Double Kick Heroes crafts a “rhythm-battle” system that not only demands but equally rewards precise play.

Things do start to get more complicated as things progress, of course. Eventually, the game asks you to manage two tracks instead of one, and then it takes another step up to three. This isn’t a bad thing on its own, but as the game starts throwing more and more zombies at you, splitting your attention between three musical tracks and the action unfolding above, quickly becomes overwhelming. Maybe it’s because I’m not exactly the best rhythm game player, but the further I got into Double Kick Heroes, the less I felt like it was a test of skill, and trending in the same direction, I felt like I started having less fun.

To its credit, Double Kick Heroes does go out of its way to somewhat alleviate this problem. Its range of difficulty options allow you to customise your experience (even if their tongue-in-cheek naming scheme makes it a tad hard to know which difficulty is best for you). Furthermore, additions like the in-game metronome and both the “chill mode” and “no overheat mod” give you an extra edge without having to “shamefully” drop the difficulty down. 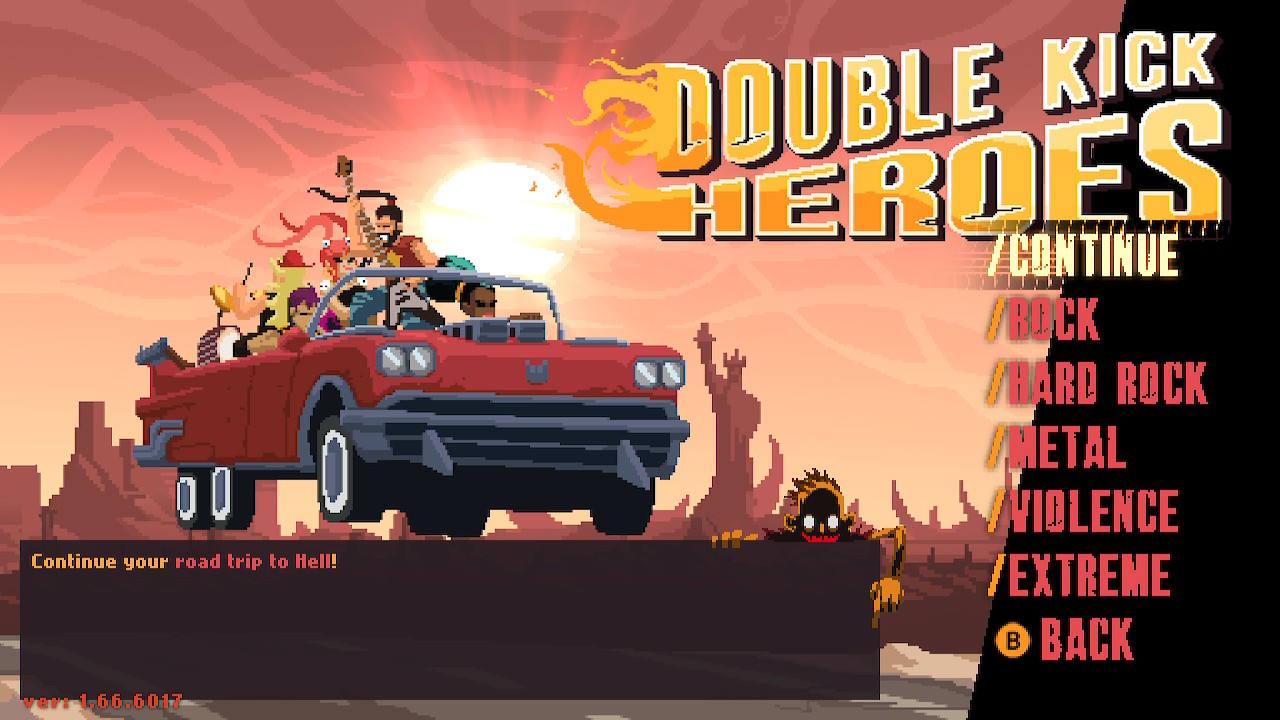 Much like I am right now, Double Kick Heroes feels a tad conflicted in this regard. While I appreciate the freedom that the difficulty options offer, I’m not the biggest fan of how they alleviate the pressure. Dropping down to the lower difficulty settings just removes the second and third tracks entirely, but it keeps the main track’s intensity quite similar. It’s a minor complaint, realistically, but the system creates a trade off where easing the difficulty comes at the cost of somewhat trivialising the game. Additionally, while I greatly appreciate the aforementioned slew of other options, it can be easy to get confused amongst them as you struggle to find a set-up that accommodates you.

It’s not just that the simultaneous beatmap-action display makes playing the game hard, but in many ways it distracts from other aspects of the game. The game is a visual treat with engaging characters and enemy designs that go above and beyond expectations, but it was more often than not difficult to appreciate the visuals when diverting your attention from the beatmap can lead to certain death. After the gruelling levels, the main cast would often comment on how “messed up” the atrocities that infect the decomposing world really are, only for me to realise that I’d spent the last five minutes with my eyes glued to the beatmap, too preoccupied to appreciate what was going on. It isn’t a dealbreaker, but it does speak to the grievances that the “beatmap-action” display introduces.

If you’re more of a seasoned fan of rhythm games, Double Kick Heroes has a lot to sink your teeth into. Not only does it boast a fantastic soundtrack, but it demonstrates a shocking amount of variety with an almost absurd amount of rock subgenres. It’s clear that this is a game with a lot of passion and talent put into it, but I suppose I don’t have the similar musical talent to back that up. Ignoring my gripes with how the beatmap and action are displayed, I’d say Double Kick Heroes’ biggest flaw is its inability to accommodate players who lack its clear, heavily musical background. 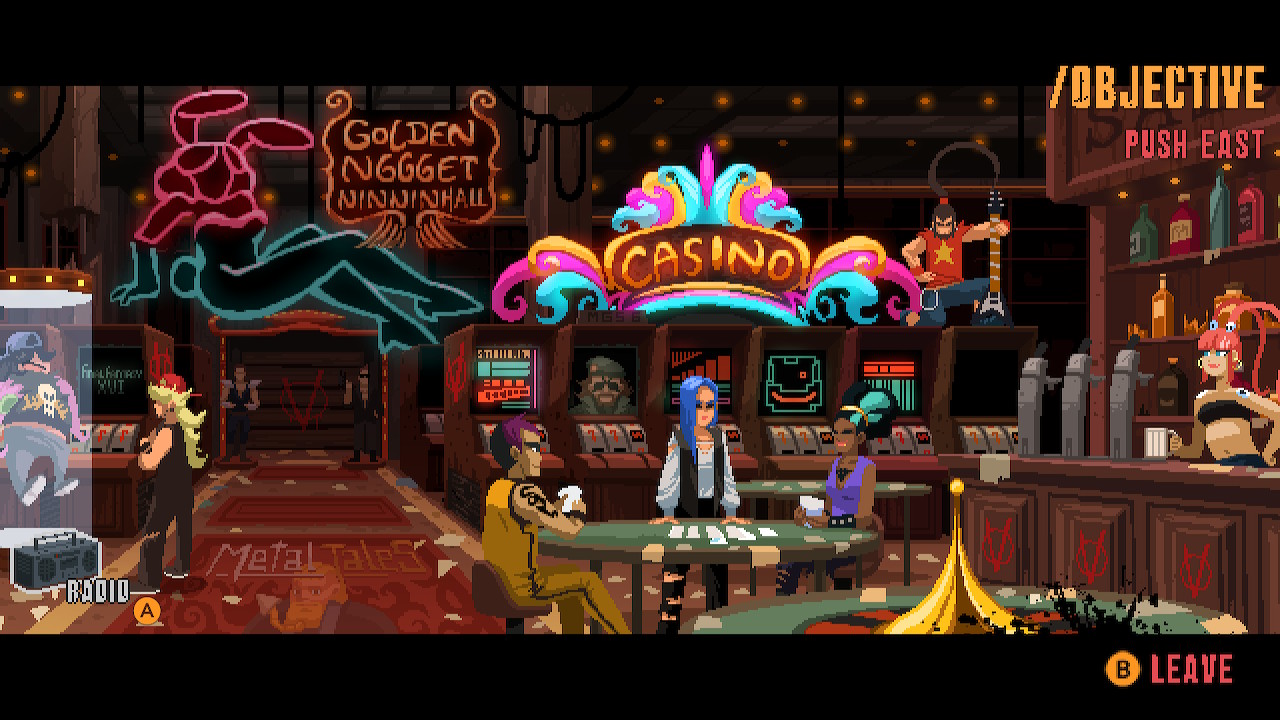 All in all, Double Kick Heroes is a game I feel like I should love: the soundtrack is fantastic and incredibly diverse, the pixel art is both super detailed and nails the grungy rock vibe, and the characters are super fun in both cast and design. Double Kick Heroes is a killer idea backed by a slew of good designs that ultimately, for me, doesn’t stick the landing. Although I want to make it clear that I don’t think this is a bad game, nevertheless, it was one I struggled to consistently enjoy.

While Double Kick Heroes puts forward a lot of clever ideas, its core gameplay often made the game itself difficult to enjoy. Clearly designed for more veteran rhythm game fans, Double Kick Heroes might have more to offer if you can combat its difficulty and relative unapproachability.