Devil May Cry’s Back, Baby

What we know so far about Devil May Cry 5

To quote my­ poetry from our pre-E3 Multiplayer feature: Devil May Cry is still goddamn radical.

Devil May Cry 5’s announcement at the Xbox E3 Briefing was easily one of the biggest and loudest reveals of this year’s stack of publisher showings, and it was partly because no-one knew quite what it would look like before that lovely trailer. Even if you were certain that an announcement was incoming (with a few vague details leaking about six months beforehand), it was impossible to know exactly what a mainline Devil May Cry sequel would look like in 2018, a decade after Devil May Cry 4 and a few years after Ninja Theory’s divisive reboot.

Would Devil May Cry 5 be something of a budget release, with a more conservative, restrained development? Would the iconic gameplay be overhauled for a modern audience that doesn’t exactly arrive in droves for the character-action genre? Even just in-series, where each entry has been almost completely distinct from the last – new story, new characters (aside from Dante), new weapons, new mechanics, where even the chronology is completely fucked (for the curious, it goes DMC3, DMC, DMC4, DMC2, with DMC5 likely taking place after 4 – yeah, it’s that fucked) – what exactly would a new Devil May Cry be? With a market focused on multiplayer experiences and confoundingly-massive open worlds, does a Devil May Cry sequel even make sense to develop?

It makes a lot of sense, apparently. This E3, we saw a big-budget sequel to the mainline series that keeps the core gameplay, that same ultra-cheese that completely defines the series’ tone (“That’s why I built him that well-functionin’ arm – to kick demon ass!”), music that literally can’t be any better or more appropriate if Capcom had tried, and visuals that compete with anything else on this year’s showfloor. For a series and genre that has never sold particularly well (though well enough for sequels), we saw another gamble from Capcom on the level of Monster Hunter World; a new title meant to appeal to spectacle-driven Western audiences without sacrificing the core traits that make the series distinct and beloved to begin with – a tough balancing act that takes a lot of faith and effort on Capcom’s part (especially following the reboot’s reception, which had similar intentions). Announcing it at the Xbox showcase instead of the PlayStation one means a lot, too: a very Western platform with a predominantly Western audience.

Devil May Cry 5 receives a major facelift to match its 2019 release date, a new photorealistic art style that’s a little odd amongst the rapid action, bizarre supernatural monsters and that sweet, sweet camp. Game director Hideaki Itsuno (director of DMC4 and Dragon’s Dogma) explains the change as a need to keep it relevant for today’s market – “something that you can take one glance at and know that it’s quality” – but the uncanny valley-like effect is something he’s aware of, too:

“We found, though, that without the proper care, photorealism combined with gaming animation can lead to what I refer to as an ‘uncanny valley of action’,” he said. “So we put a lot of effort in to ensure that the game would still play with that tight Capcom play control, but still feel at home with realistic graphics.”

It’ll be worth watching how this new aesthetic impacts the story and environments. These two elements have always been unabashedly video game-y and camp in the previous games: stories and dialogue that are just out-and-out terrible (charming in their own way but still quite bad), with these clean, open environments designed solely for combat encounters, using drawn out Resident Evil-style puzzles as thin motivation for backtracking across maps and triggering enemy encounters. They’re games dedicated almost entirely to their combat systems and Dante’s “wit”, released in generations where that was appropriate, but an overhauled, realistic look demands a more serious aesthetic and story presentation that isn’t a complete farce. I mean, it’ll definitely be silly and cheesy, but go back and watch some of DMC4’s cutscenes; they’re a struggle to watch by today’s standards. The gameplay revealed so far, however, is unmistakably Devil May Cry. Fast and impactful, with roots firmly in classic arcade beat-em-ups. Compared to modern character-action games like Bayonetta and other PlatinumGames releases that are far more fluid and almost dance-like — more mechanically approachable in many ways – DMC5 seems refined but largely unchanged. It’s impossible to say for sure, though. Early days.

The character Nero, Itsuno’s creation from DMC4, is back with a system that seems similar to Dante’s ‘Styles’ from DMC3 and DMC4. No longer in possession of the supernatural ‘Devil Bringer’ that let him pull and grab enemies with a phantom hand, sliced off by a ‘mysterious stranger’ that fans immediately deduced to be someone very un-mysterious (keeping potential spoilers to a minimum for now), Nero now uses a robotic hand called the ‘Devil Breaker’ with abilities that, like Dante’s Styles, may be changeable on the fly.

Based on what’s been shown so far, we know that the Devil Breaker can: pull enemies closer a la DMC4’s Devil Bringer (likely a universal ability); unleash shocks of electricity; fire off bursts of rebounding laser beams (similar to DMC3 weapon Artemis); be literally surfed like a rocket-powered hoverboard; frantically rocket through nearby enemies; and create a bubble of slowed down or frozen time (a little like DMC3 Dante’s Quicksilver Style). As a parallel to Dante, Nero’s Devil Breaker seems to roll the original Devil Bringer together with Dante’s weapon variety and Styles into a single package. Very cool. There are also three playable characters: Nero, Dante and a new character potentially named ‘V’ who, according to the insane detectives that haunt video game forums, might be a ‘summoner’ type character – a type we haven’t seen in the series so far and who could play very differently from the straight-forward guys and gals that hack and/or slash.

Besides all of that, there isn’t much else to discuss yet, only speculation based on a thoroughly dissected trailer and spots of gameplay from a behind-the-scenes clip. We know that Dante has a motorcycle and a beard, and considering the series so far, I doubt we’ll see anything very new for him in DMC5 compared to Nero and the mysterious dude in the black cloak. The narrative seems just as distinct as always – something world-ending and supernatural that’s likely not connected to the previous games (especially as a franchise relaunch so long after the last entry). 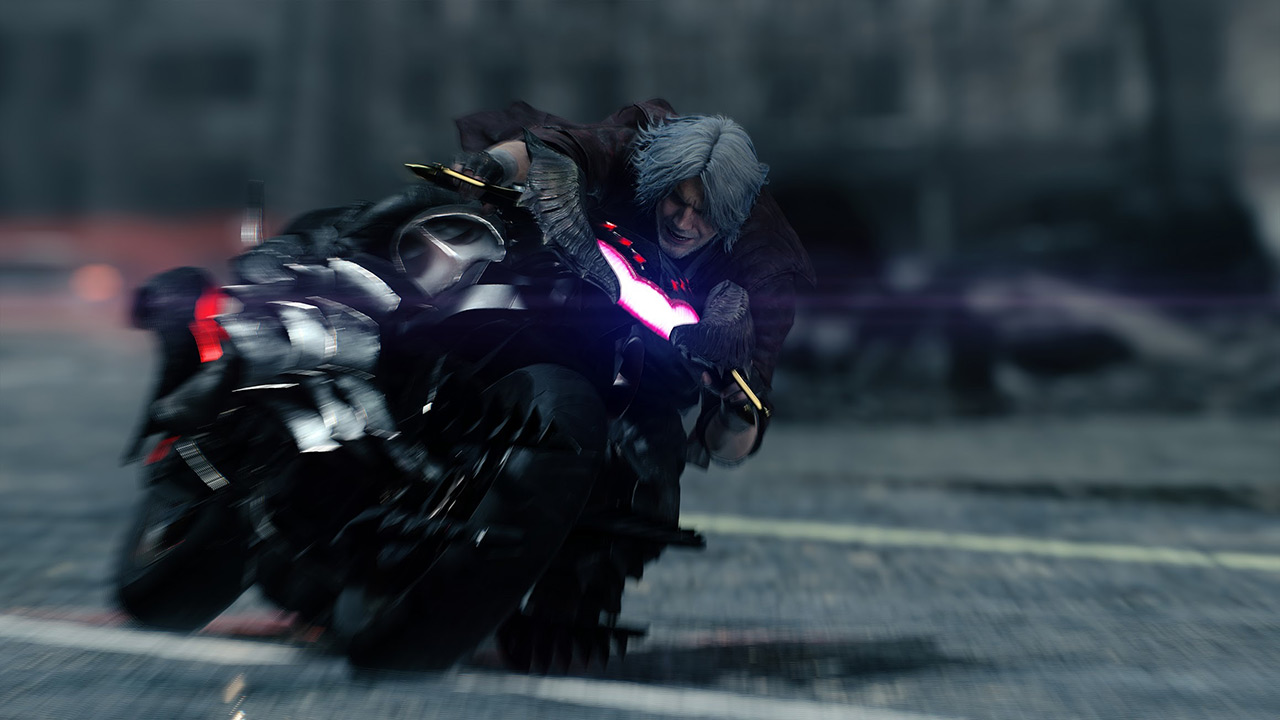 To me, Devil May Cry 5 is most exciting for how massive a gamble it is, a West-focused gamble that could imply more substantial changes than what’s been revealed so far. It’s reminiscent of Monster Hunter World but it’s not really the same: MHW was never a genuine risk and was always going to sell well due to its ongoing (though stagnating) success in Japan, even if it didn’t fare too well globally. Devil May Cry, however, is not one of the biggest series Capcom has ever produced but nevertheless received a similar backing to MHW’s. Don’t get me wrong, I’m very, very happy about this, but it makes DMC5 a curious case.

All that matters, though, is that the original character-action series is back – no, seriously, for real this time. Will DMC5 be exactly what fans hope it’ll be? Greater, even? So far, Capcom’s given us no reason to doubt them.

Devil May Cry’s back, baby.

[…] are easy to pull off individually, OlliOlli focuses on variety. Similar to the style meter in the Devil May Cry series, consistency and variety earns the highest […]