A familiar formula that provides predictable and satisfying results

I’m pleased to say that yet again, being a maniacal serial killer, sneaking around to outposts and methodically taking out large quantities of murderous henchman gives you just as much joy in rural North America as it does on a beautiful tropical island or in the snowy Himalayas. Far Cry 5 is another solid entry into the open-world genre, with which Ubisoft appears to have had a lot of fun lately. It feels like you’re beating the same old familiar drum at times — if it ain’t broke, why fix it? — but Far Cry 5 has a good blend of plot, combat and characters to make it an enjoyable time for new and returning fans.

This time around, in Ubisoft’s fifth mainline entry of the series, players are thrown into the fictional Hope County, Montana, playing as a mute Sheriff’s Deputy nicknamed ‘Rook’ or simply ‘Deputy’ throughout the game. Right off the bat, you’ll realise that rural North America isn’t nearly as appealing a setting as the lush jungles of a tropical island, or the mountainous and snowy regions of the Himalayas, but Hope County is a massive playground that players can traverse however they please. The world is filled with dense forest, river rapids, bundles of wildlife, and a rather surprising variation of friendly NPCs that make the world feel more alive than any previous Far Cry game. The setting’s relative lack of allure feels intentional, bringing a much-needed sense of realism to a game in which the Deputy can drive off a cliff and walk off without a scratch and grenade-launch bears, and where the comparatively small wolverine is the most dangerous natural threat . Despite that lack of allure, though, Hope County and its surrounds are absolutely stunning, especially running at 4K on the Xbox One X. The colours and details really pop and there are very few frame rate drops; the only gripe one might have is that it only runs at 30 frames per second — rather than the desired 60 — but that feels like a nit-pick given how wonderful the game looks and how well it runs even at 30. Within Hope County, players deal with Joseph Seed, the zealot leader of the cult known as the Project at Eden’s Gate (whose members the locals call “Peggies”), who believes he speaks to God and is determined to prepare himself and his followers for the supposedly-impending apocalypse. The militaristic cult uses its massive arsenal of weaponry — including, for the first time in the series, attack aircraft — to oppress those outside of it, and mind control to control those within it. Although he has some good moments, Joseph Seed doesn’t leave anywhere near as strong an impression as previous villains Vaas Montenegro and Pagan Min; compared to them, Seed simply lacks the charisma that helped those two become such incredible villains. What does give the character some, well, character, is his jaded sense of morality — like any good villain, he genuinely believes that he is a hero. Unfortunately, while good in theory, his relative scarcity throughout the 25 hour campaign doesn’t give players opportunity to form much of an opinion outside of early impression, making him more of an afterthought than anything else. Couple this with uninspired delivery when he’s on screen — excluding a select few exquisite moments — and Seed leaves a lot to be desired as a primary villain.

Fortunately, Seed is flanked by more interesting characters in the form of his three lieutenants (and siblings), Faith, Jacob and John. Each sibling rules over a particular region of Hope County — and a particular division of the Project at Eden’s Gate dealings — . Each character has a distinct personality and traits that distinguish them from their siblings, and they’re all intriguing in their own ways, with a special mention reserved for Faith, who is the easy pick for most interesting villain — and possibly character — in the game. She’s an angelic figure of happiness and Zen who employs a hallucinogenic drug called ‘bliss’ (yes, drugs make a triumphant return again to the Far Cry series) to control her subjects, which makes for some visually stunning moments and some anxiety-inducing drugged henchmen. Jacob is a former army marksman who doesn’t necessarily believe that the apocalypse is imminent — or that Joseph speaks to God — but does his brother’s bidding out of disdain for “the weak” and the belief that the world has come to ruin. Although John is the least interesting of the three Heralds, he produces some of the game’s most enjoyable missions along with some brutal cut-scenes that genuinely have you disliking the character, which is a credit to some damn good writing.. Although it is these three, and not Joseph, who provide many of the intense, satisfying moments to be had within Far Cry 5, it’s unfortunate to note that they will likely end up being forgotten within Far Cry lore; they’re essentially Joseph’s puppets with no truly memorable dialogue, which leaves the game’s selection of villains somewhat short of the previous titles’. 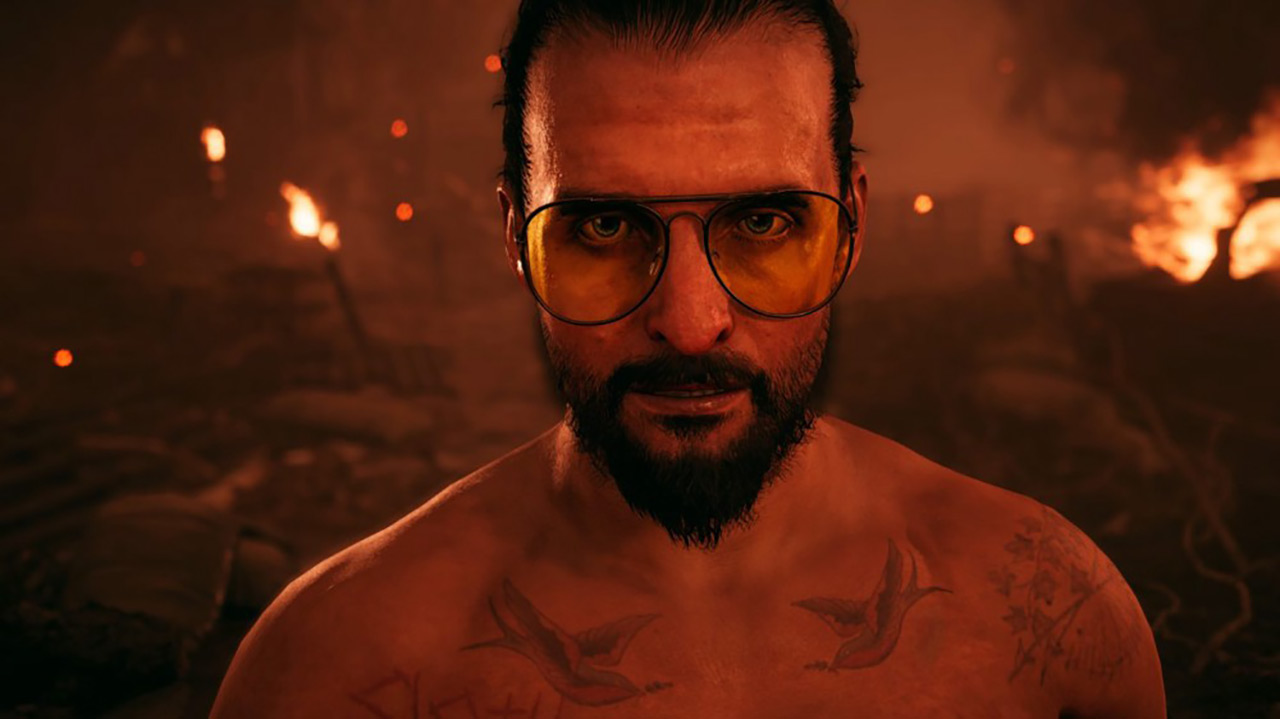 Although the gameplay is still solid and satisfying, it also feels quite repetitive. The missions and tasks you’re given, the weapons at your disposal, the items you collect to make materials, the now cliché drug missions, and even the violent wildlife are all rinsed and repeated from Far Cry 3 and 4. The only significant difference is that you no longer hunt animals to craft, instead now completing challenges such as killing a certain amount of people with one grenade, or wingsuit flying a certain distance in one stretch to unlock “perk points” with which you can buy skills, or larger ammunition and weapon holsters. For the most part, it all blends together so that there isn’t much in the way of surprises in store for you. Depending on how you see it, this can be either good or bad: some players may find themselves bored of what has become typical Far Cry gameplay, while others will subscribe to the “if it ain’t broke, don’t fix it” school of thinking. Either way you spin it, the gameplay on its lonesome is still a blast, joyfully brutal and just as smooth and satisfying as ever.

There are only two major differences in the way you play the game as opposed to previous entries, the biggest one being in the structure of the main quest. Instead of the linear mission structure of old, players can now choose in which order they complete main and side missions to build up their resistance points and eventually draw each of the three Seed lieutenants out into their regions and taking them out. It makes for an interesting progression system, and it’s nice to have visuals for your progression — it also gives it this Super Mario feeling of building up levels, taking down mini bosses, on your way to the final boss (Joseph), who can only be confronted once his siblings have been defeated. This method of progression takes full advantage of the massive open world like no other Far Cry game has done, with no limitations at all from the get go. It’ll be a shame if this doesn’t carry forward into future games. 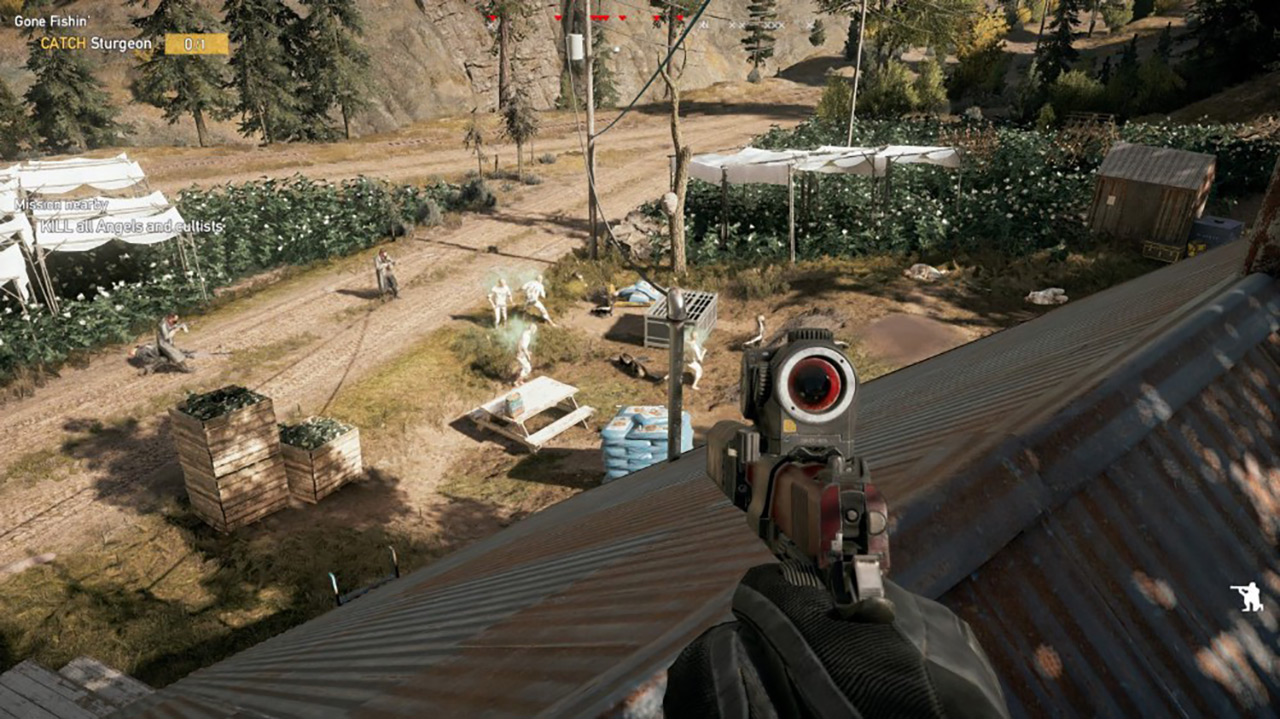 The other major change is that Far Cry 5 incorporates a ‘buddy’ system into the game. What was previously essentially a one-man army game can now be played with up to two non-playable allies who become “Guns (or Fangs) for Hire” after the Deputy completes their story missions. Each of the nine Guns/Fangs for Hire are well fleshed out, with distinct personalities and unique abilities that make them ideal for different situations; the favourites, however, are sure to be Boomer the dog, Cheeseburger the grizzly bear, and the returning Hurk, an absolutely hilarious redneck who was a pre-order bonus character in Far Cry 3 and a downloadable character in Far Cry 4. The entire campaign can also be played with a friend (although only the host will accrue the progression and the achievements or trophies for completing certain tasks), which opens up a whole new level of teamwork and gives players the opportunity to recruit a friend for assistance if they’re stuck.

Arcade mode provides some good replay value, bringing back the series’ map level editor, now with up to 9,000 items and structures — including assets from other Ubisoft titles including Watch Dogs 2 and Assassin’s Creed IV: Black Flag — to choose from in building custom solo, co-op or multiplayer maps. It has all the potential to be amazing and have lots of recurring play value, but as it currently stands, potential is all it has as the mode is pretty bare, not offering too much in the way of content. The mode will surely grow and expand as the game ages and more players begin to jump into it, but until then there’s not much to see. 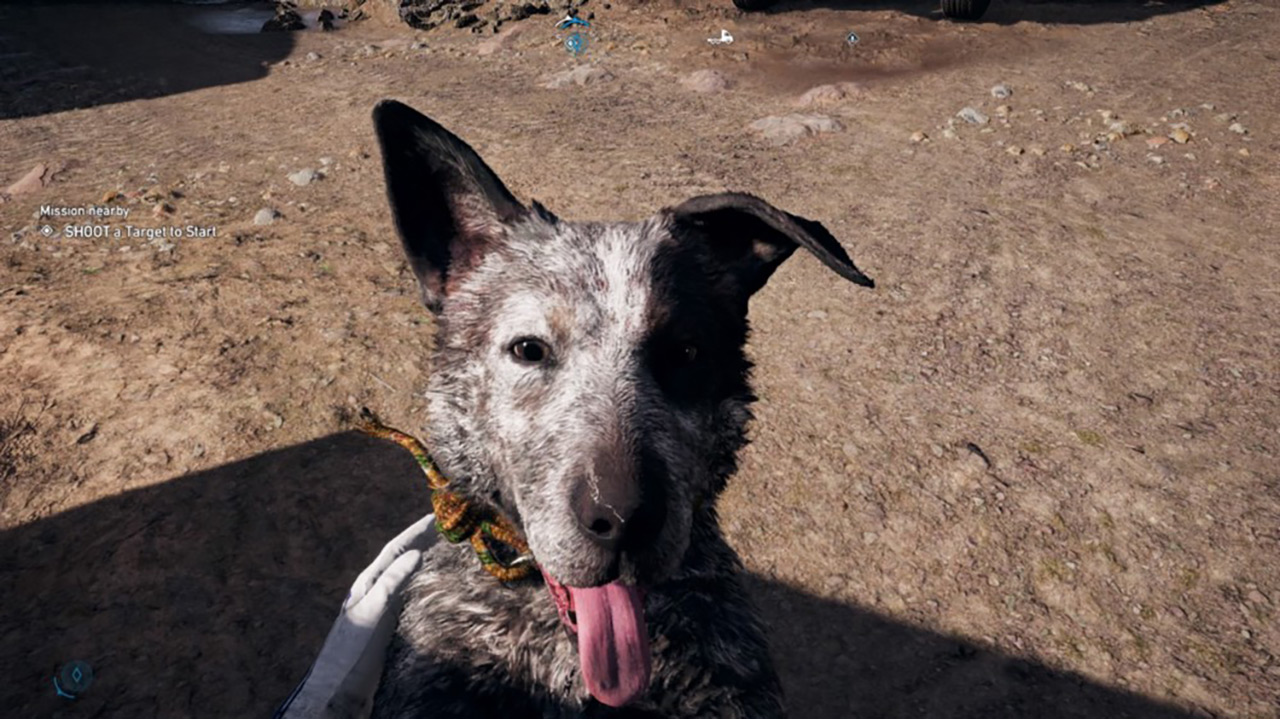 Far Cry 5 is a beautifully made game that couples an arcade-like 80s action movie feel with a more grounded sense of realism than the previous games in the series, all in one neat package. The campaign’s newly-open structure feels fresh, allowing players to enjoy the freedom and large space of the visually appealing, very much alive open world. Support characters throughout the game are strong and well fleshed out, and villains are interesting enough to keep players engaged without stealing the show like previous Far Cry villains. The gameplay itself can be a little repetitive in terms of mission structure as well as assets and concepts that have been seen in the series before; if players can look past that, however, Far Cry 5 is sure to go down as a major hit.

Though not without its share of flaws, the fantastically-made Far Cry 5 is a very solid entry into the Far Cry series. Long-time fans may find themselves a little worn out due to the somewhat repetitive nature of the series as a whole, but that’s unlikely to encroach on their enjoyment of the game. This game is sure to be well and truly in the Game of the Year conversation, and for great reason.