For a franchise that’s loved for providing a very specific experience, XCOM has always been extremely open to experimentation. It’s played with setting – Terror from the Deep’s shift to underwater environments – and genre (see: Enforcer and The Bureau’s forays into shooter gameplay), and the Firaxis era has been notable for its attempts to make the series more accessible.

Though spin-offs are part of the grand XCOM tradition, XCOM: Chimera Squad makes some of its boldest tweaks yet. The franchise staples of large, semi-freeform levels and disposable, customizable soldiers make way for smaller, more tightly structured encounters and a pool of prefabricated characters with specific skill sets who you – sectoids preserve us – actually need to keep alive. 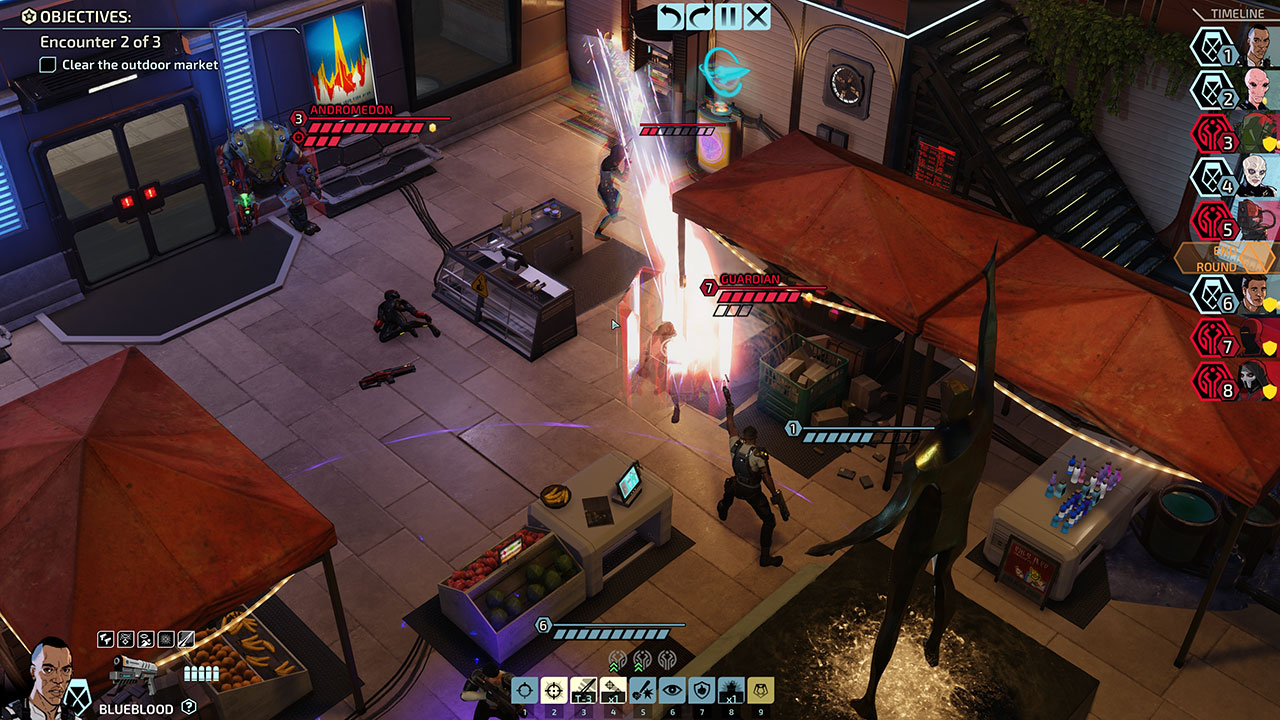 That last part was always going to either make or break Chimera Squad. XCOM’s main appeal has always been the personal connections you make with your mostly identikit troops, and the ever-present likelihood of seeing them wiped out in vulgar displays of RNG wrath. This time, we have specifically-designed characters with dialogue, scripted interpersonal relationships with each other and whose death in the field immediately throws you to a mission failure screen. Firaxis has dabbled in hero characters in recent times (e.g., the Chosen from XCOM 2’s War of the Chosen expansion), but this is about as un-XCOM a move as you can possibly get.

Thankfully, Firaxis makes the change work by providing a stronger diversity of skills. Which can be coordinated in combat for a variety of effects. Sectoid psionic Verge can mind-control enemies to group together, making them easy pickings for explosives expert Claymore. Drone-using characters Terminal and Patchwork, on the other hand, can be used to keep allies healed and enemies electrified with no concern for range or cover.

Not all characters are that useful – shieldbearer Cherub, for example, has a fairly ho-hum set of abilities, and operators recruited in the late-game stage won’t get a chance to unlock their best skills – but the system works well in general, rewarding experimentation in ways that traditional XCOM hasn’t always allowed. Some have criticised the writing and voice performances behind these new characters – expect lots of light-hearted quipping between missions – but I actually found them okay, in a “Saturday morning cartoon” kind of way. Tonally, Chimera Squad leans further towards the light-hearted than Enemy Unknown and XCOM 2, which I personally found kind of charming. As much as I love the Firaxis XCOM games, I always found that their chunky, primary-coloured design aesthetic jarred somewhat with the grimdark, body-horror-heavy tone they tried to push in the writing and world-building. Going for that “Saturday morning cartoon” tone actually gels much better with the aesthetic style, to my mind.

As with past XCOM games, the gameplay is divided between boots-on-the-ground turn-based combat, and a world-spanning strategic/management level. Here, as the equivalent of a SWAT team in the post-alien war city, your task is to maintain order while hunting down three terrorist factions. 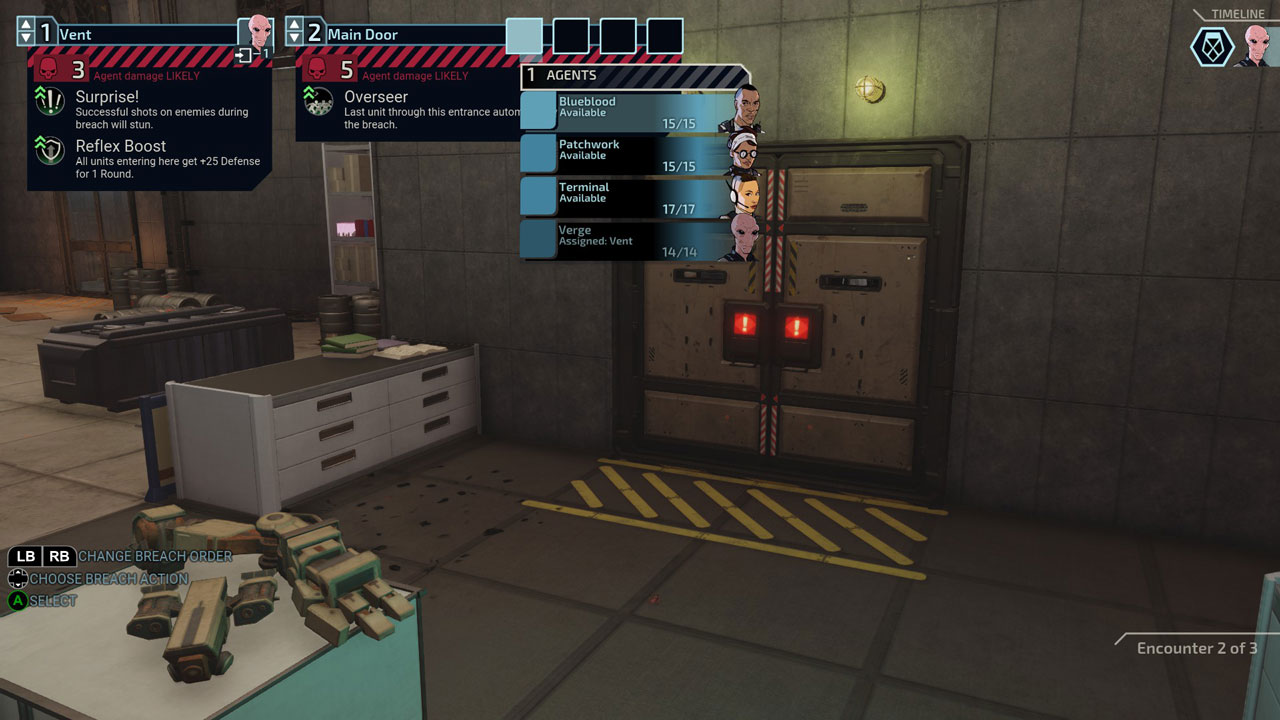 The combat is pretty much as we’ve come to expect from XCOM, but with a few new tweaks. As mentioned before, Chimera Squad focuses on smaller, more intimate encounters, often taking place in several rooms or areas of a particular building. This is where the new Breach mechanic comes in. To start with, characters are assigned to one of several entry points – the standard is through the front door or through a window, but some equipment/character combinations provide alternatives. You might be able to sneak through a vent, for example, or throw subtlety right out of the window and blow a hole in the wall.

When the breach is triggered, you enter a slow-motion sequence as each squad member gets to pick a target for a surprise shot. While this is really a glorified cutscene, it’s immensely satisfying to decimate half of the perps in a room in one fell swoop. This then leads to the third stage, where the enemy gets to fire back while your team lunges for cover. Unlike the slow, graceful entrance, this plays out quickly and often brutally as your team sometimes takes a large amount of damage in rapid succession.

Also new to Chimera Squad is an intertwined turn order, which makes your turns alternate with the bad guys’. While you have options for team members to coordinate, moving each other up the order list, that also gives the enemy a higher chance of themselves getting several uninterrupted turns to wail on your guys. It’s a nice risk/reward element that also facilitates experimentation, and learning how the skill sets of your agents intersect. 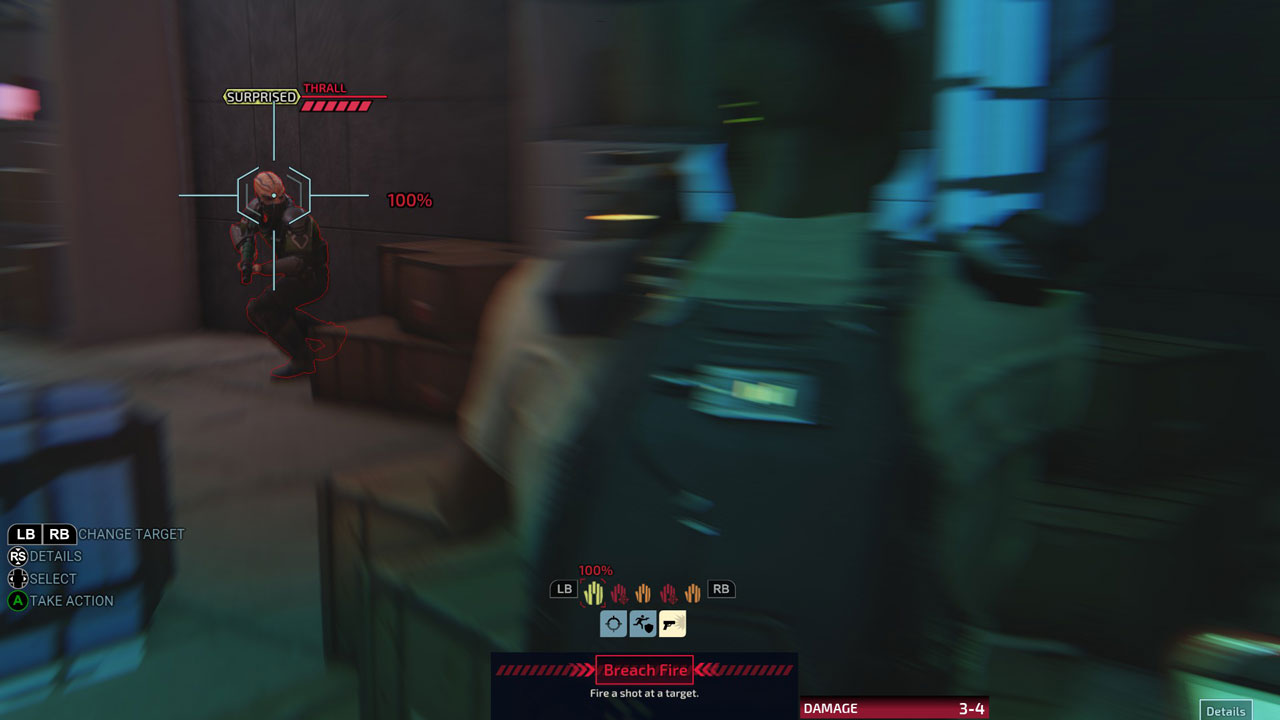 Like in traditional XCOM, the strategy layer is about assigning agents to missions while managing an overall panic level. The city is divided up into sectors, each with their own Unrest meter which contributes to an overall City Anarchy level, which if maxed out ends the game (basically, the equivalent of XCOM 2’s Avatar Project). Doing missions and investigations in a sector helps reduce Unrest, and you can deploy Field Teams to gather funds, intel or Elerium, a resource used for equipment upgrades.

By far the most important resource is Intel, which is crucial for buying and upgrading security field teams. These help prevent sector Unrest from rising too quickly, and is pretty much the only thing that stops your City Anarchy from going critical in the late game. Idle agents can also be assigned to various Spec Ops missions, one of which nets you extra Intel. In fact, the reliance on a steady string of Intel begins to hamstring your options as the game goes on; using resources to gather funds or Elerium begins to feel wasteful as the city begins accruing Anarchy at an alarming rate. It’s an interesting idea, ultimately undone by a lack of balance.

The city screen’s UI is also a bit of a mess, especially when it comes to assigning squad members. It makes sense in theory – highlight an empty slot, then pick a character from a drop-down menu – but I had numerous problems actually getting the right slot to register. On several occasions, I found myself removing team members I didn’t want removed, before finally getting it to work by fluke, unsure of what I was doing differently. Look, I’ve been playing Championship/Football Manager for almost two decades now  – I know how to juggle a roster. Chimera Squad’s menus, however, feel like they have a mind of their own in a way that is often downright infuriating. 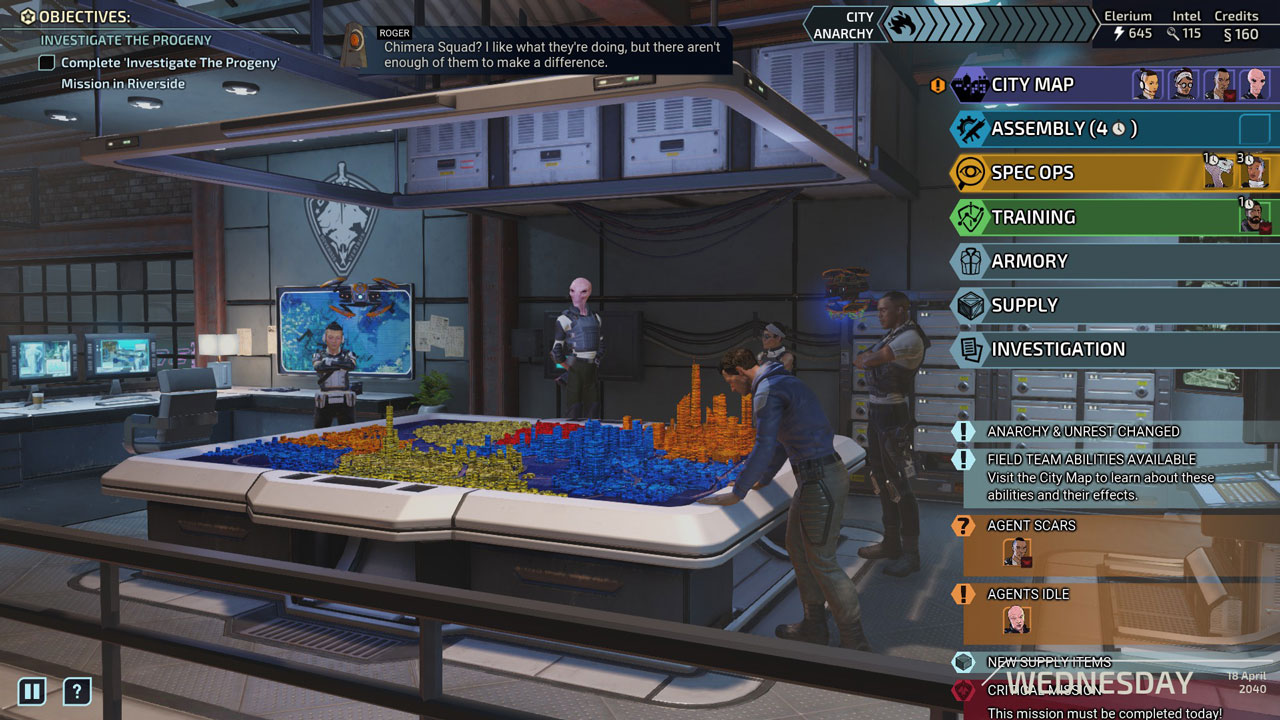 It also needs to be said that, even on the third iteration, Firaxis’s engine remains… well, eccentric. Though definitely more reliable than in past entries, still be ready for weird camera locks and crashes. The engine also has a tendency to micro-freeze when there’s a lot of units on screen, which becomes especially noticeable when the Necromancer – an enemy unit who revives dead comrades, and conjures groups of spectres – comes into play. A couple of those guys in the room, and you’re in for long, frustrating stretches as the engine haltingly tries to process all of their underlings’ moves.

These annoyances don’t stop Chimera Squad from being a ton of fun to play, however. There’s a pretty solid amount of game here for your AU$30, with the campaign running to 20 or so hours, more if you don’t skip side missions. In many ways it feels like a run-through of possible ideas for the inevitable XCOM 3. While no fan would ever want to lose the series’ traditional large levels and character customization, there’s enough here – Breach Mode especially – that could make for great additions to the franchise going forward. 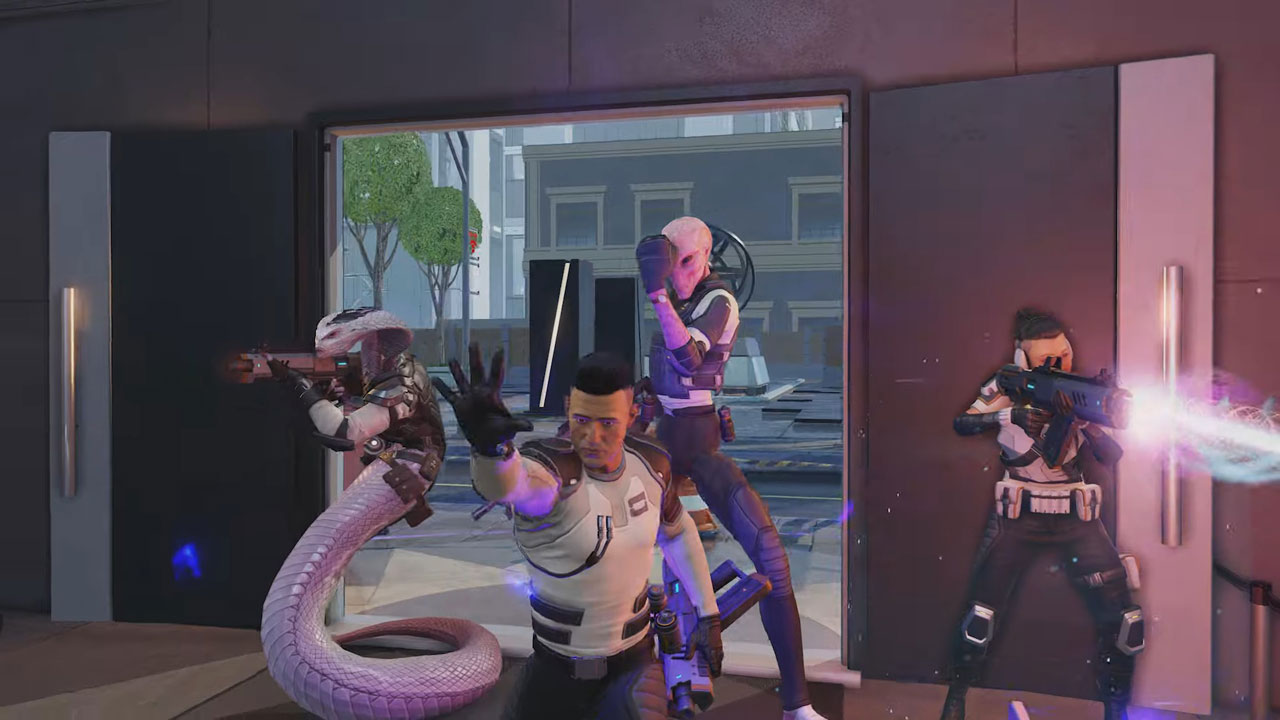 XCOM: Chimera Squad is an example of a spin-off done right. While it has its fair share of clunk, and shelves key aspects of the franchise, it succeeds in replacing them with interesting new tricks that one could see fitting into future installments well. There’s a lot of innovation here for the budget price, making it a refreshing jaunt for fans awaiting XCOM 3.