Why We Should be Optimistic for Overwatch on Nintendo Switch

Announced as part of last month’s Nintendo Direct, 2016 Game of the Year winner, Overwatch, is headed to the Nintendo Switch in just under two weeks’ time. Although the announcement itself leaked a few days in advance due to an errant (and swiftly deleted) Amazon listing, it’s led many to question just why Blizzard would opt to port the game to a device such as the Switch, which is considerably underpowered when compared to Microsoft’s Xbox One and Sony’s PlayStation 4 Pro.

One of the most common concerns about the Switch port is the console’s inability to display the high-quality graphics that other platforms can. Blizzard’s communications manager for India, the Middle East and Africa, Nazih Fares, has confirmed that the Switch version of Overwatch “runs smoothly at 30 [frames per second] with outputs of 900p docked and 720 undocked.” Those measurements come in considerably lower than the 60-or-more-fps available on other platforms, which also output the game at 1080p (and even more in the PC’s case), but it’s hard to deny that the Switch brings a different experience that the other platforms can’t boast.

Overwatch is also not the first major third-party title to be ported to Switch since the console’s release. The Elder Scrolls V: Skyrim and Wolfenstein II: The New Colossus are two of the particularly demanding games that have arrived on Nintendo’s portable home console, and their ability to run without any major issues should encourage significant optimism regarding Overwatch’s future on the console. Let’s take a look at the graphical comparisons between Skyrim on the Switch and a high-end PC, embedded above. It’s clear that the PC version’s graphics are far better — and more detailed — than the Switch’s, but people who bought the Switch version weren’t buying it because they wanted the best version: they were buying it because it was fun to be able to play such an immersive open-world title on a handheld device, meaning that they could play it anywhere they wanted to.

The comparison between the Switch and PS4 Pro versions of Wolfenstein: The New Colossus (below) follows the same pattern. Although the Switch version does leave a little to be desired when it comes to lighting and more intricate textures like hair compared to the PS4 Pro version, it’s not terrible by any means — it still features everything that appears on the other versions, just in a little bit less detail at times. Wolfenstein’s Switch version also shows us that third-party first-person shooters can run quite successfully on the Switch. 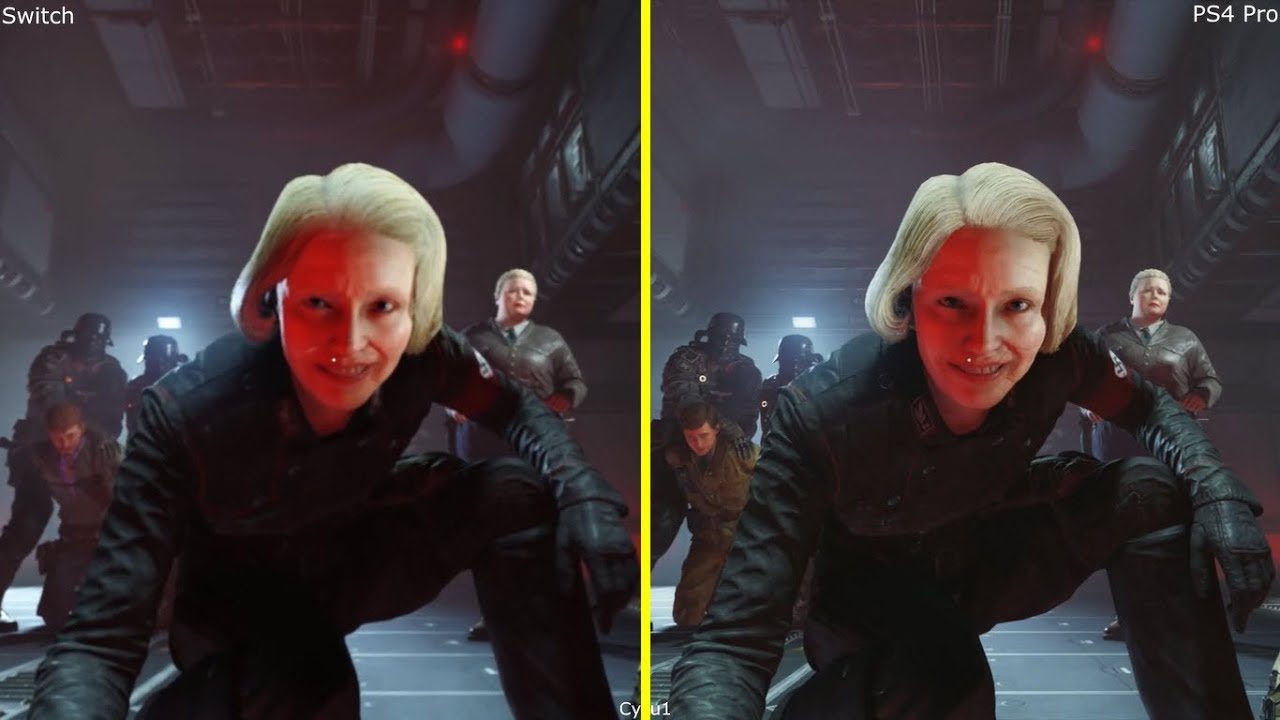 The Switch’s graphical limitations are of little consequence when it comes to a game like Overwatch, though, especially when one considers the nature of the Switch itself. The Switch is primarily a social console, designed to be taken anywhere you want to take it and played with friends and family. Of course, online play is available, but for games like Overwatch it’s often better to play in a physical environment as opposed to over the Internet — just look at the matches played in the Overwatch League since its inception.

Sure, the teams still communicate with each other via wireless headsets while they’re actually playing the game, but they’re also in close proximity to one another; that makes it infinitely easier to discuss their strategies face-to-face between matches, with all of the advantages that face-to-face communication offers. For the most part, this face-to-face communication, augmented by playing the same match on different screens in the same room, has been limited to professional players and teams, but having Overwatch on Nintendo Switch changes that.

There’s also a historical precedence for the success of team-based shooters on the Switch, in the form of Splatoon 2. The game’s Switch announcement trailer depicted groups of friends together in the same room with their Switch consoles, drawing up their strategies for Splatoon matches and working out the best positions to station themselves on particular maps. In this regard, Overwatch is a very similar game to Splatoon 2 in this regard: being able to take your console with you on the go — as opposed to lugging your PC or your console around with you — is a significant benefit when it comes to formulating and executing your strategies.

It’s also important to consider the role that the Switch’s gyro-aiming feature — a motion-based control system that involves tilting your controller — plays in first- and third-person shooters. Many outlets had nothing but good things to say about the system’s implementation in Splatoon 2, and although it’s important to judge Overwatch’s Switch version independently of Splatoon 2 (they are very different games, after all), it’s a cause for great optimism. Hell, Overwatch producer Wes Yanagi told Vooks that “one of [its] designers plays this way [primarily using gyro-aiming” and dominates.” Of course, gyro-aiming isn’t ideal for everyone, and if Overwatch’s port to the Switch is to be successful, Blizzard will need to ensure that gyro-aiming is a choice, rather than a requirement.

Given the console’s incredible versatility, the Switch is essentially a perfect home for Overwatch — and Overwatch is essentially a perfect game for the Switch. It’s unlikely that people are going to buy Overwatch on their Switch because they want to play the version of the game with the best graphics, or to play the game on their TV while docked; instead, they’d likely be buying it because it’s more conducive to social gameplay, or because they want to play it on the go. With that in mind, in addition to the console’s portability and potential to include the best motion-based control system on the market, it’s difficult not to be optimistic that Overwatch could be an incredible success on the Nintendo Switch.

[…] Luke looked into some of the reasons why we should be optimistic about Overwatch coming to the Nintendo Switch.  […]

I dunno. It’s still the very same Overwatch with the very same nazi practises for banning people out of the game they payed money for. That’s what happens when a game is just a multiplayer mode and is not owned by you in any way shape or form, even when you supposedly have a physical copy. So no, thank you, but no optimism on this side.

Thanks for reading the article, DevilGearHill, I would have imagined that people who get banned by Blizzard would be for some reason, I’m pretty sure Blizzard has some support system in place anyway if there is an unfair ban too. Unfair banning is a problem but I think Blizzard has been pretty clear what counts as ban worthy behaviour so I don’t think that this is going to impact the success of Overwatch on Switch too much.