When They Turned Doom Into a Movie, They Forgot What Made it Iconic

Welcome to Press X To Adapt! Every two weeks, we dive into a game-turned-movie or movie-turned-game to take a look at how it turned out, the differences between the two, and anything else worth chatting about.

If you have a suggestion or we missed something, let us know on the socials or in the comments below!

The first was as a shooter. Series developer id Software modernised what needed it and barely touched what didn’t. This meant a console-friendly shooter that was more like the fast-paced originals than the slower, dimly-lit Doom 3. With a meatier campaign and varied character progression, it was classic Doom created for modern tastes.

But the second was in the lore and world, mainly through the normally-unnamed player character. Here, Doom’s archetypal “doomguy” became the “Doom Slayer”, a mute barbarian central to a wide-spanning mythology that underpins Hell as a dimension. A green-suited space marine, the Doom Slayer’s futuristic mechanical armour – dubbed the Praetor Suit – is covered in as many demonic runes as factory product codes. It even absorbs Argent energy (basically Hell Juice) to make itself even stronger.

The Doom Slayer is a mystery unto himself – and an evolution. He’s the next step in a series that blends the technological and the supernatural, a mythical space marine who’s literally feared by Hell and only communicates in Hulk-like smashing. As the video game version of a metal album cover, where ultraviolence, dark fantasy and science-fiction comes together into visceral, blood-soaked sprints through Hell itself, the Doom Slayer is the perfect symbol for the series. 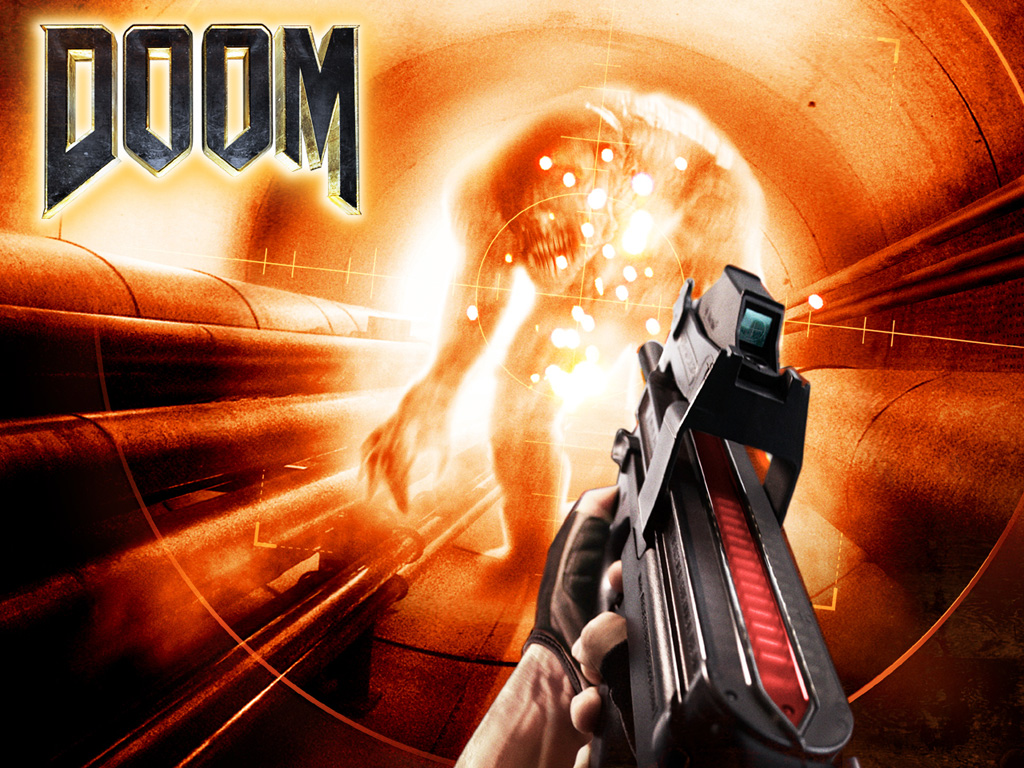 As a film – which I’m calling Doom ’05 – it should be an excuse for lots of clearly-people-in-rubber-suit-demons to get hilariously blown apart by shotguns alongside a kick-ass metal soundtrack. It should take a lot of inspiration from stuff like Evil Dead and Braindead. It should look like it was fished out of a 20-year-old time capsule.

What Doom ’05 actually is, is a mediocre Aliens rip-off that throws out what made the games so iconic and memorable. It’s got some of it, like the violence, the BFG and someone named Pinky, but not much else. This definitely has something to do with Doom 3 releasing about a year before it, so doubling as a commercial only makes sense. The low-lit metallic corridors, scientists transforming into straight-up zombies, the focus on its science-fiction elements – all taken from Doom 3.

After the zombies, though, the filmmakers kind of gave up and dropped any sort of supernatural anything. There’s no Hell. No demons. There aren’t even any shotguns that I can remember (which seems downright immoral for something based on Doom). It’s just mediocre science-fiction, zombies and mutants who look a little like Imps from the games. Also The Rock is in it, because everyone loves The Rock.

I can’t imagine anyone cares but SPOILERS for the unicorn who does.

Doom ’05 follows the movie version of doomguy named John “Reaper” Grimm (played by Karl Urban) as he and the rest of the space marines, the Rapid Response Tactical Squad, are called off leave for a new assignment: to investigate a breach at a Union Aerospace Corporation-run research station on Mars. The research station studies and experiments on the remains of a dead martian civilisation, which is very similar to Doom 3 but cuts short of anything supernatural. Where Doom 3’s martian remains led to creating portals to the demon-filled Hell dimension (which isn’t technically supernatural but whatever), Doom ’05’s led to the resurrection of the martians’ own superhuman project, which turns most humans into wild demon-ish mutants. These mutants can also create zombies, or something (it’s really unclear). Once all the Predator rejects arrive on Mars, the tension ramps up when they find a single living scientist covered in blood named Dr. John Carmack, which might be one of the most overt creator nods I’ve seen outside of Metal Gear Solid (though using his name for the Cowardly Scientist character is a bold move). Zombie-mutant things start attacking and the marines are killed off one by one, either by getting their head sliced off or fighting in a hand-to-hand electrified cage match against a giant mutant (because Doom, I guess?). After that, it suddenly turns into a race to contain the outbreak and survive a crazy The Rock, who’s now playing Brando in Apocalypse Now. Karl Urban gets injected with a super serum, wrestles The Rock for a while, then the movie ends.

Honestly, despite the above paragraph, Doom ’05 is fine if you come into it with low expectations. It’s definitely not good, but it isn’t the worst thing I’ve seen either. It’s a firm “meh”.

The lack of demons or an actual Hell aren’t even the main issues with the movie. It’s that it has no identity of its own. The writing is mediocre – some lines are very terrible while the rest are just bland – its music makes no impression at all, and I can barely remember any of its action scenes aside from the misguided first-person sequence towards the end, which is far less interesting than it sounds and, running at just over four minutes, far longer than it should be. It’s just sort of there, and then there’s 15 minutes left in the movie.

In the end, I wouldn’t say that removing the supernatural stuff was a good idea for Doom ’05, but I can see why they thought it was. The Big Sci-Fi Base is Hell, and all the mutants and zombies are the demons – get it? Similar to Street Fighter: The Movie, it makes sense in that way that someone with little appreciation for what they’re adapting would think makes sense.

Think about it, though: without the demons, without Hell or the Satanic imagery, without the metal or the sprinting pace or the vibrant ultra-violence or the shotguns (seriously, what’s up with that?) – it isn’t really Doom, is it?

Compare this to DOOM ’16, which kept true to the original vision. It’s a mix of supernatural and sci-fi that works best on a visceral level, pushing players through labyrinthian gauntlets of chrome-plated Hellscapes set to a metal soundtrack, blasting through scarlet-red demons while collecting brightly-coloured pick-ups. With the same fundamental concept as the original, DOOM ’16 reminded everyone how compelling the series still is over two decades later. 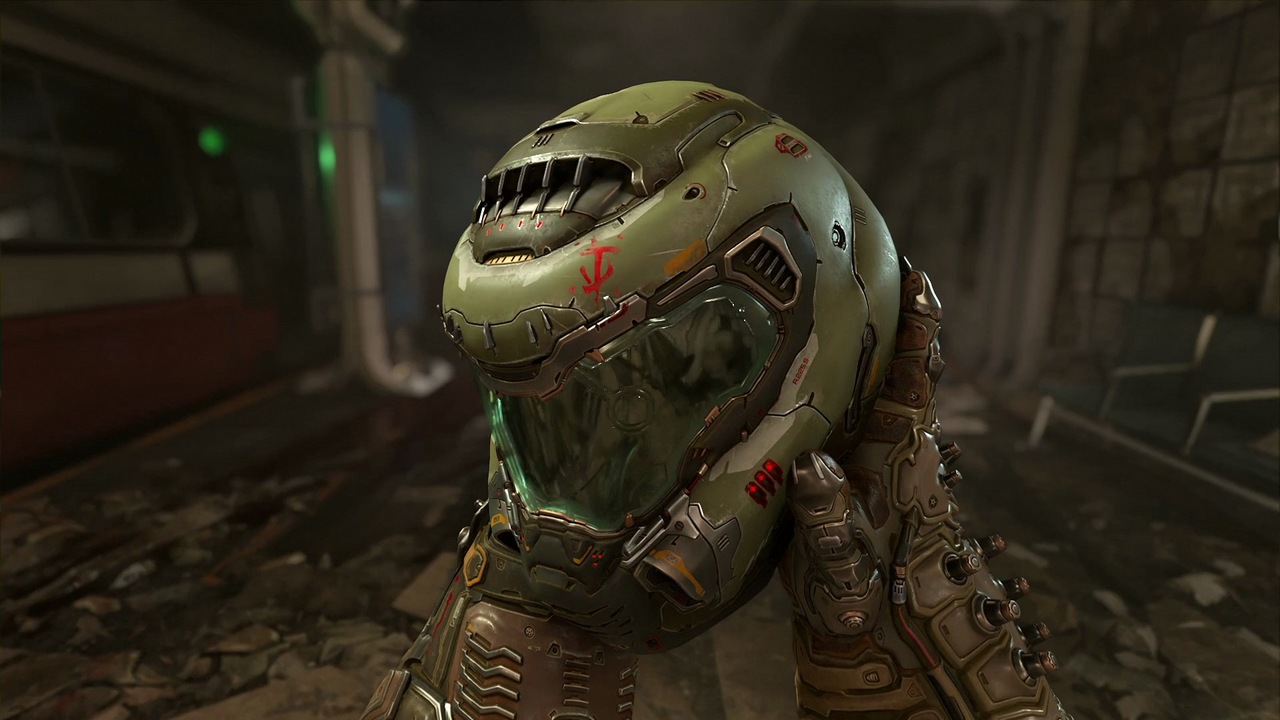 In a way, Doom ’05 did the same thing. It ignored what made the series so memorable and beloved in the first place, gutted just about everything that made the games recognisable – and in turn, cast a spotlight on everything the film was missing. It highlighted how integral all these things were to a true icon in the gaming lexicon. Through its relative terrible-ness, it reminds one of Doom’s aesthetic brilliance.

If history has taught me anything, Doom’05 could have turned out worse by just imitating the games. But at least that movie would’ve been more memorable than what we actually got.

Thanks to those at the Doom wiki!