It’s not too often that I see or even play games like Vaporum: Lockdown, an old-school grid-based dungeon crawler in the spirit of Eye of the Beholder or Legend of Grimrock where one proceeds step-by-step through dank dungeons fraught with traps and monsters alike. Although it may be something of videogames’ past, it’s still good to see developers trying to keep older designs alive. Vaporum: Lockdown represents a well-made effort to do exactly that, though I can’t help but lament how “safe” the game turns out to be.

The game is set as a prequel to the original Vaporum that Fatbot Games released back in 2017. In fact, it’s identical to that original title in many regards, seemingly adopting the “if it ain’t broke” philosophy; this time, however, you assume the role of a named, fully-voiced protagonist who must explore the titular Arx Vaporum and discover exactly what’s going on. Just like the original, the gameplay involves first-person real-time combat where you move through tiles one by one to a soundless beat; combat can be a slow dance, where you try to time your moves accordingly to dodge attacks or block an enemy’s retreat, or it can be a frantic mess as you get surrounded and mauled before you can react. 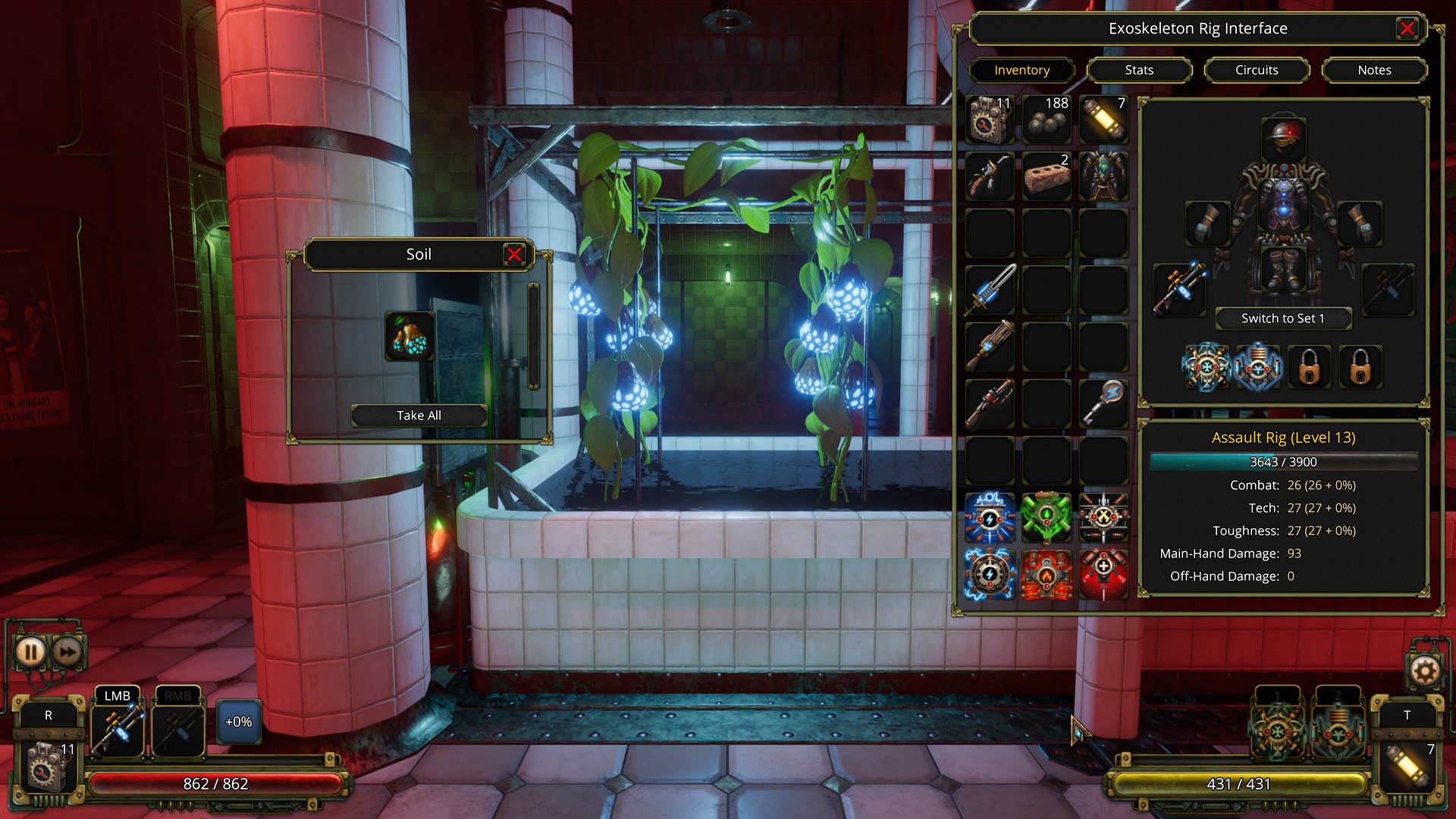 That meat is combined with the potatoes of classic RPG elements: loot everything you see for valuables, read every note, listen to every recording, murder everything in sight for more valuables, uncover secrets that would drive Lovecraft nuts… and then perish in an untimely manner to an unseen trap. You can’t get more old-school RPG than this experience, so Vaporum: Lockdown certainly delivers on that front, but it almost feels a little too “safe”: there are no major mechanical changes from the original Vaporum to speak of, and there isn’t too much to differentiate it from other games in the genre from that mechanical standpoint. Instead, Fatbot Games’ biggest effort to set Vaporum: Lockdown apart comes in the form of its signature steampunk aesthetic, although it’s not as much “steampunk” as it is just rust, robots and muskets. Not every game has to be daring or full of risky decisions, but it can be argued that it’s good to try and stand out from the crowd in certain aspects, and Fatbot Games hasn’t done too much of that here.

With that being said, Vaporum: Lockdown does debut a unique Stop Time mode, where time will stop after every action you take. This does elevate the gameplay to a more strategic level than before, as it allows for careful planning if you prefer that over frantic action, and I found it particularly helpful in rooms where I had to fight several enemies at once while also keeping an eye out for instant-kill traps. In addition, rather than slinging spells you make use of Gadgets, which are essentially the same thing but with a different name to fit the steampunk aesthetic. That’s an unfortunate theme throughout Vaporum: Lockdown, to such a point that it often just feels like a steampunk-oriented reskin of the games that inspired it rather than a real tribute to them. 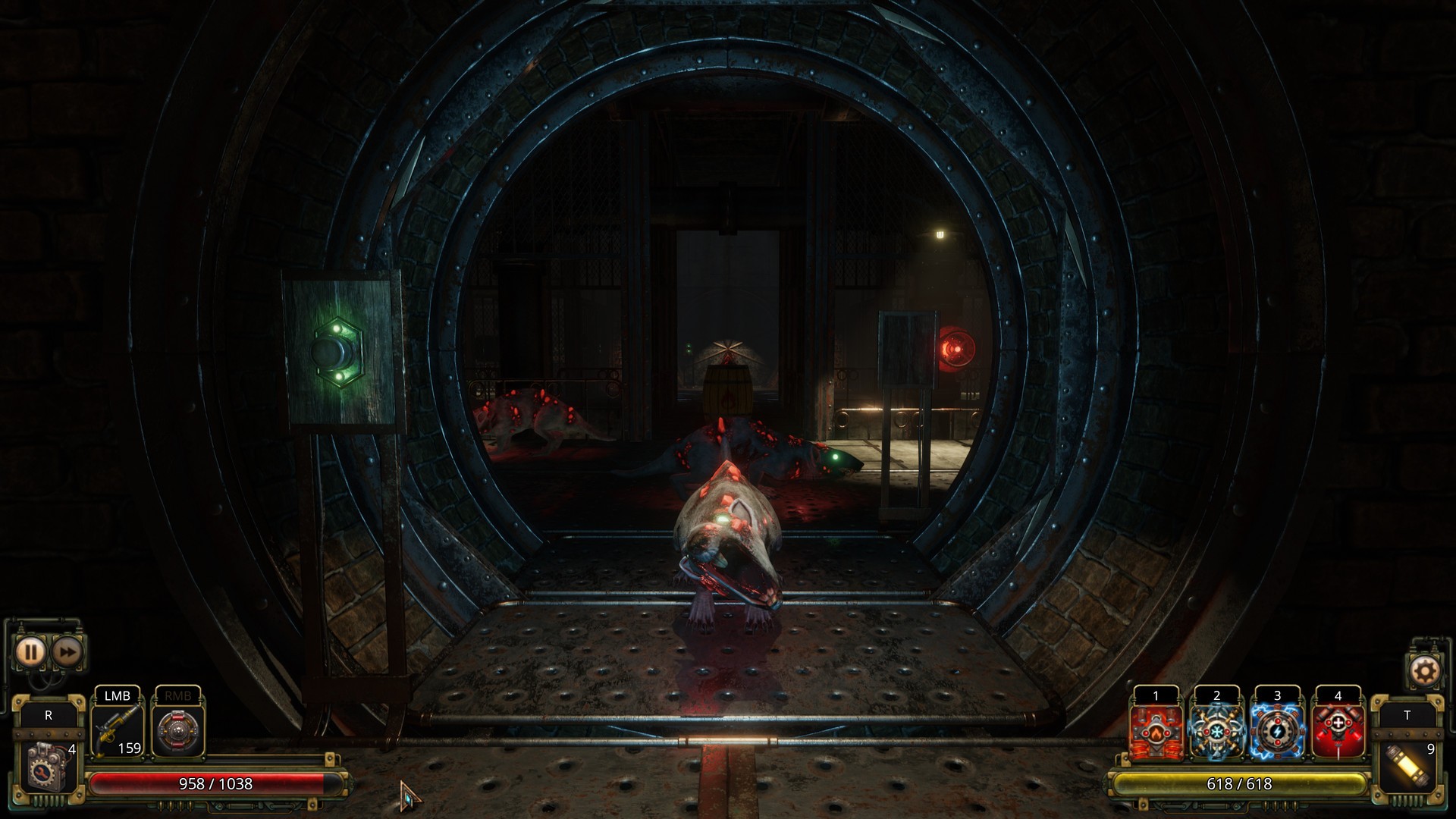 Fighting giant rats with a weapon and a shield? Now where have I done that before…

All of this isn’t to say that Vaporum: Lockdown isn’t a fun game, though. On the contrary, it deploys a truly tried-and-tested formula in a good way: the levels are interesting, with a good variety of room layouts to go through; the secrets and puzzles aren’t overly gruelling to figure out; and what I did experience of the story and lore is definitely good enough to hold my interest. Additionally, considering the type of game it is, I was impressed to find that I managed to battle through a decent amount of the game without feeling like it had become repetitive — enemy types do tend to overstay their welcome, but they come in enough new flavours and elemental upgrades to keep you on your toes with respect to combat strategies.

Vaporum: Lockdown offers a well-made, compact dungeon crawling experience with enough content to keep any RPG fan interested — it’s just a shame that it does so little to stand out amidst its peers.

[…] kicked off what turned out to be a busy week of content with a review of Vaporum: Lockdown — ”a well-made, compact RPG dungeon crawling experience that doesn’t do enough to stand out […]