We all love a good indie game. There’s something awe-inspiring about the thought of a one- or two-person team creating something masterful from passion and individual skill, in stark contrast to titles that feel as if they’ve been run through a board of businessmen before launch. Today we’re looking at UnderMine, the early access title from Derek Johnson and Clint Tasker’s new studio Thorium, and it does inspire awe — UnderMine has seriously impressed me. It’s the quarantine time-sink I’ve been waiting for, and another example of an early access success.

UnderMine is first and foremost a roguelike, a genre that has become synonymous with games such as The Binding of Isaac or Enter the Gungeon. The genre is so influential — especially in modern indie development — that anyone familiar with the term intuitively knows what to expect and often falls into the trap of comparing new roguelikes to the classics, and that often gets us nowhere; despite any similarities it may share, I don’t want to do UnderMine the disservice of comparing it to the rest of the genre. Instead, I want to discuss UnderMine based on its own merits and avoid getting into needless Dark Souls/”Souls-like” comparisons.

UnderMine’s menu screen features lovingly-detailed pixel art of a never-ending procession of peasants jumping feet first into the depths of a mineshaft. That’s an apt metaphor for the game itself — you can expect to die a lot, but fortunately you’ve got an endless supply of commoners to send into the meat grinder. The game introduces you to your character, one of the aforementioned commoners, and immediately greets you with a colourful array of market and trader NPCs who introduce its first major mechanic: currency and upgrades. Each time you descend into the mineshaft, you’ll find gold, which you’ll then use to upgrade your main combat stats, and a rarer special currency called Thorium that you’ll use to purchase new items. 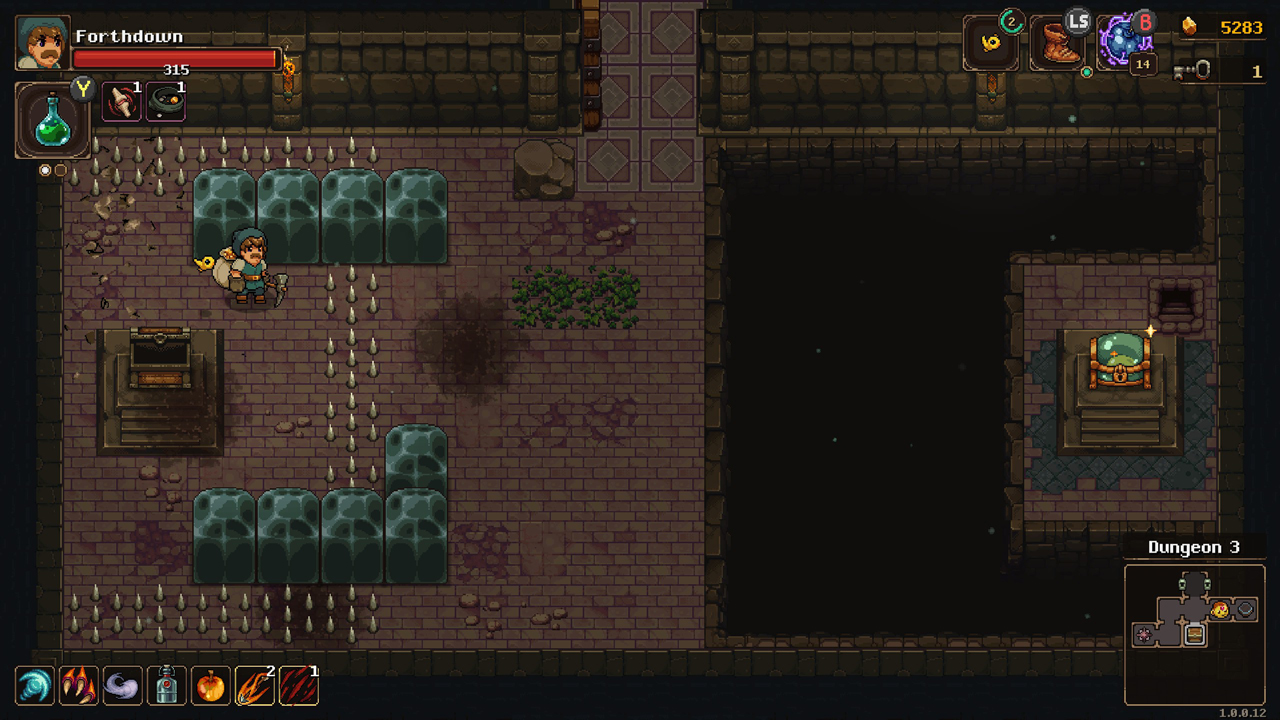 Not going to “fall” for that one!

My boss, the stuffy Archmage Arkanos, has charged me with a series of mundane tasks: retrieve this, kill that, get a lot of gold… all in a day’s work for a lowborn peasant! With my tasks in mind, I dove down the shaft into the unknown depths below and defeated my first foe, a fearsome blue slime… thing. I whacked a shiny rock with my pickaxe and lo and behold: I had struck gold! Unfortunately, I wasn’t the only one who realised that — a group of adorable little slime critters called “Pilfers” burrowed out from under the ground to steal anything that I had yet to pick up. After swatting them away with the aforementioned pickaxe, I ventured onward to acquire a forgotten ancient relic that blessed my otherwise-mundane peasant with a fearsome power; in this case, the ability to have my pickaxe ricochet to every enemy within range when I threw it. With this newfound power, I picked, axed and bombed my way onward, only to be confronted by a boulder that was full of gold and a bad attitude. More like a golem, really, this rock-pile mimic spelled the unfortunate end for my first peasant, striking a fatal blow and exploding him into little gold chunks reminiscent of Sonic’s rings (I will never forget you, Luope!). The game immediately pulled me back to the hub, introduced me to my brand-spanking-new character, Olives, and the cycle continued.

With each death, each mistimed jump and miscalculated pickaxe swing, UnderMine will give you the opportunity to get stronger — each time you die you’ll retain some of the gold and all of the Thorium you collected. This allows you to continually upgrade your mud-covered peasant into a veritable champion of the working-class. Each descent into the depths will also yield new schematics, which let you unlock relics and potions to help with your evolution into a pickaxe-swinging death machine. After exercising a whole bunch of patience, and dying a whole bunch of times, I finally defeated the first boss (with Sono Sanctus’ fantastic soundtrack blaring along), and claimed a mountain of gold and Thorium as my reward.

That’s essentially UnderMine’s core gameplay cycle. Repetition is where some roguelikes fail, because nobody likes to keep doing the same thing over and over, but UnderMine keeps it endlessly rewarding and endlessly fun by offering difficult and varied gameplay through different combinations of rooms, encounters, items and secrets in every iteration of your quest. In fact, UnderMine excels by offering so many different scenarios and variations that it’s impossible to see everything it has to offer before you complete a whole playthrough. 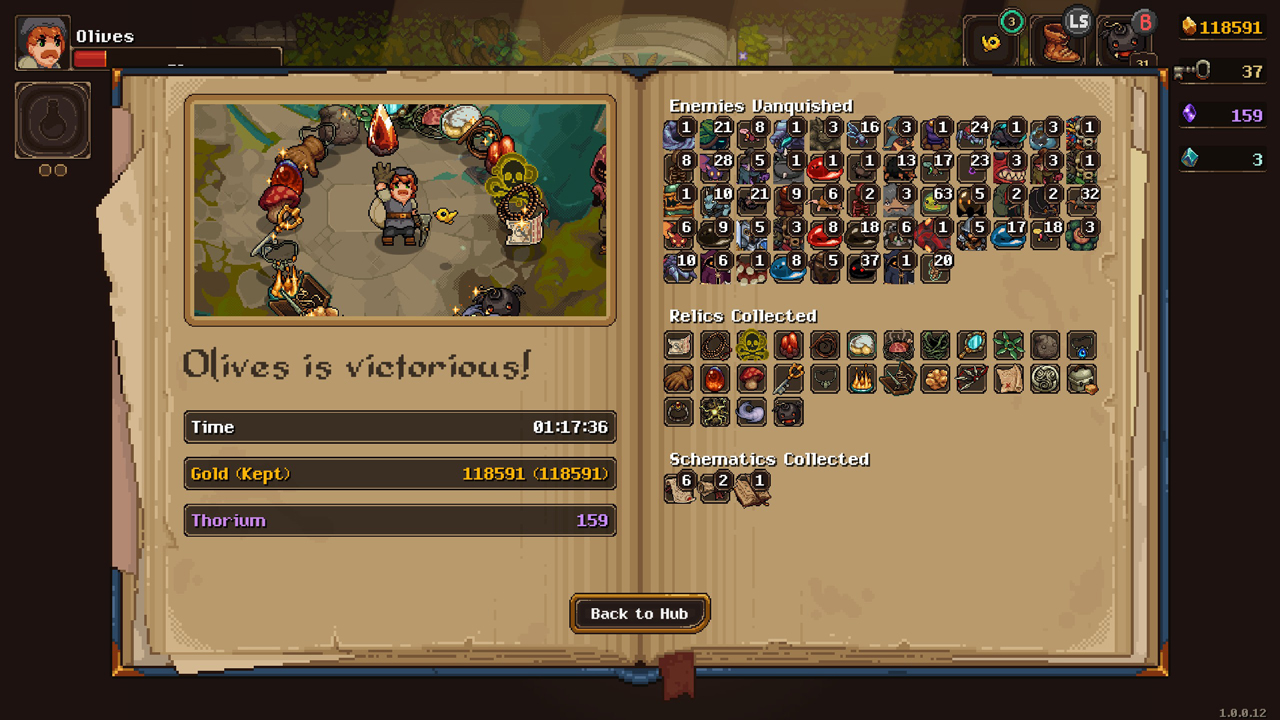 After an untold number of deaths, our hero tastes victory!

This randomness does lead to some complaints, although they’re very minor. It’s possible to get very unlucky on a given run, with healing items being unpredictably scarce and leaving you vulnerable before a boss fight. The Curse/Blessing system is also a little unbalanced: an NPC in the starting area will let you pray for powerful Blessings that augment your base stats, in exchange for a randomly selected Curse which imposes negative stat effects. Some of these curses are negligible, like a small reduction in damage on your pickaxe swing, but others may spell your early doom. Once again, if you are particularly unlucky you might find yourself laden with a curse bad enough to make you prematurely end a run, like one I encountered that caused my maximum health to permanently decrease as I slayed enemies. The RNG gods are fickle and curse-removal items not particularly plentiful. Both these complaints can be remedied by some practice, patience and some sound strategy, though.

What has me particularly excited is how well Thorium has absolutely nailed the core roguelike formula. Although it’s only just come out of early access, UnderMine is already great and I can only see it getting better from here. I’m excited to see what this game does next and more than happy to take it on as another devourer of free time like The Binding of Isaac and Enter the Gungeon before it. Each time I send another poor bugger down that mineshaft I have no idea what might happen or what I might see, a feeling that takes a great roguelike to inspire. It’s not uncommon now for me to boot up a sub-par game and think “damn, I could be playing UnderMine right now”.

UnderMine is exceedingly well done for an early access title and deserves just as much fanfare as other big established roguelikes now that it’s a full release. Impressively, it has a complete feature set and seems to be ready for a bright future, quite unlike the mines it’s set in.