As current as it is, Trials of Mana has served as a bit of a time machine for me, transporting me back to the early ‘90s. Back then, after having played through more widely-known franchises like Final Fantasy and The Legend of Zelda on my Super Nintendo, I proceeded to absolutely lose myself in the superb Secret of Mana, which turned out to be one of the best RPG titles released onto the console. It delivered lush visuals (for the time), a quirky plot and plenty of challenging battles, but its fanciest trick was giving you the option to play through it with co-operatively with a friend — better still, said friend could drop in and out of the action, with the game reverting to a solo experience when you were playing alone.

Secret of Mana was an interesting title, a tour de force on the SNES whose innovations got me following the Mana series quite closely, and its 1995 sequel, Trials of Mana, continued that excellence. This 3D remake continues to uphold those high standards; having fallen out of touch with the Mana series after Trials of Mana, it was interesting to see and identify its subtle tropes once again, almost three decades later. Like I said — a time machine. 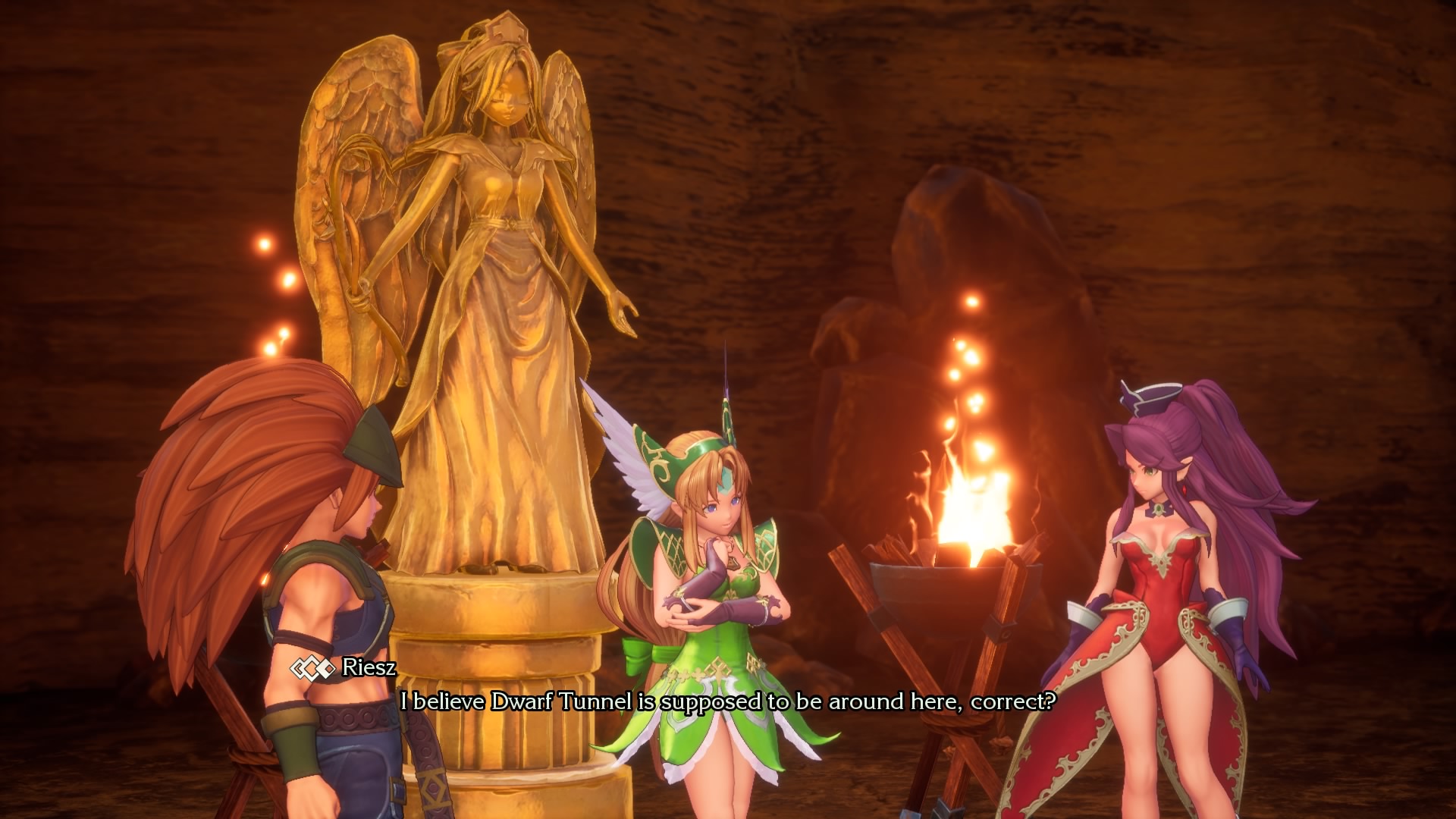 Trials of Mana’s strength lies in the fact that you don’t need to have played Secret of Mana, the original Trials of Mana or any of the other stories in the series to enjoy it; much like Final Fantasy (for which it was intended to be a spin-off in the late ‘80s), the narrative is self-contained and plays just fine even if you’ve got no knowledge of the series before it. Indeed, action fans who just want to blast their way through its offering can consider the story largely irrelevant and just move from quest marker to quest marker as they go.

With that being said, you’d be doing the game — and yourself — a considerable disservice if you didn’t occasionally stop and smell the roses, as it were. Some of the character development and narrative segues are pretty funny, whether that’s intentional or not, and the story assembles itself in an interesting manner. Additionally, elements such as the wistful soundtrack, the wacky narrative, the many spells and magic items available and even the goofy “dancing merchants” are common to both the original and this re-release, and they help to add to the current offering’s quirky flavour. Trials of Mana’s story arc is entirely dependent on you: you’re asked to choose your own party of three adventurers from a pool of six, with one character playing the lead role based on your selection. The game does make sure to introduce the three characters you don’t choose as you move through the story, though, so you still get to experience all six story arcs to some extent. There’s plenty of detail to be found and the game does give you the option to play through an origin story for your chosen companions, but it was disappointing to find that 30 years after Secret of Mana offered it, and in spite of all the advancements that gaming has made since then, Trials of Mana doesn’t offer the option to play co-operatively. 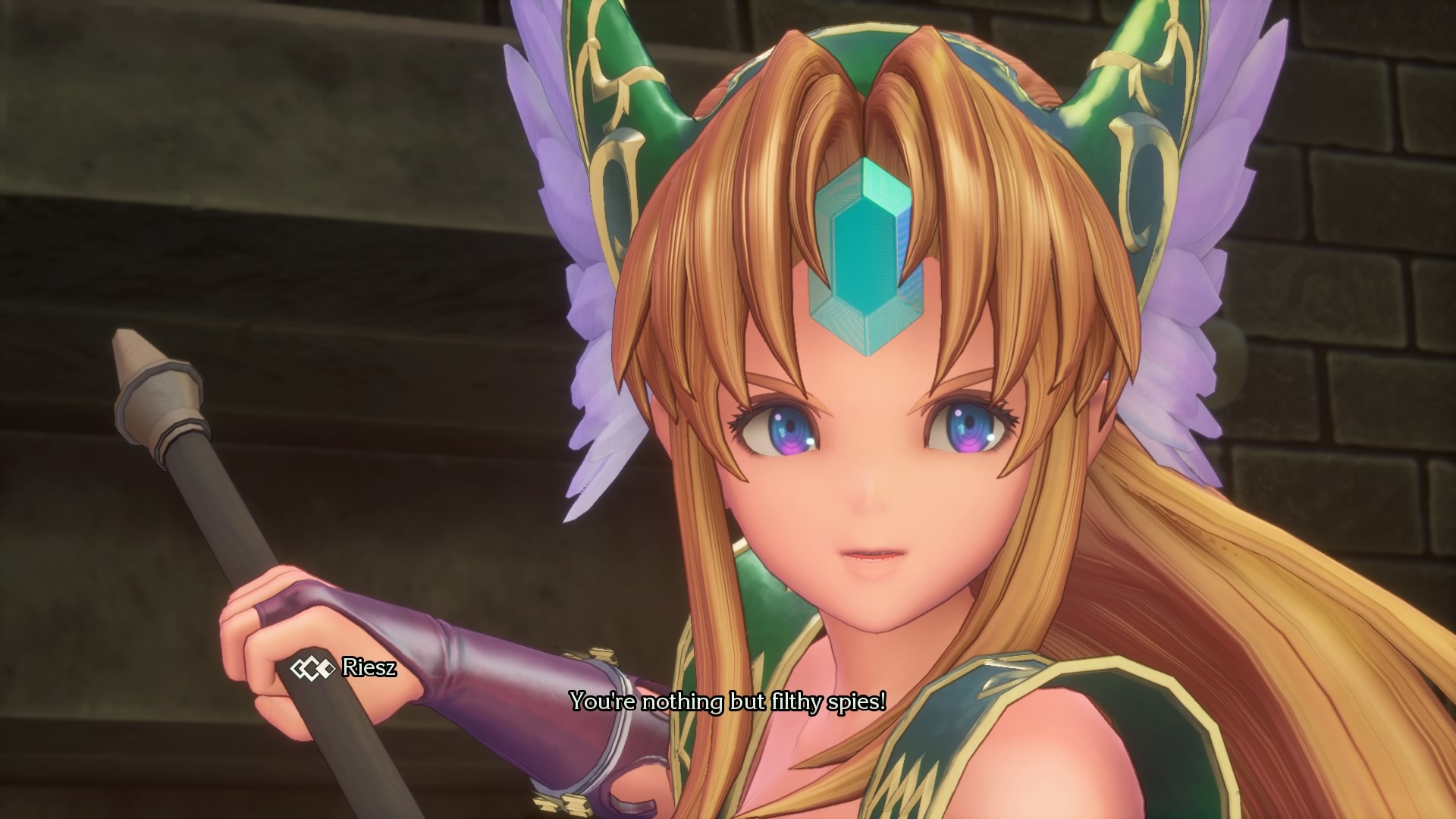 The characters on offer in Trials of Mana are quite variable, each with their own set of skills and each appealing to different types of players. Since you’re choosing three characters to play with from the beginning, rather than being able to chop and change at will like in modern RPGs, it’s important to note that not all of the characters were created equal: some of them just aren’t well-suited to a playthrough, and you won’t find that out until you’ve already gotten quite a way through the story. That’s… annoying, to say the least. My choice of lead character, Riesz, was one of those: despite being classed as a warrior, she’s not a great brawler and has limited options when it comes to ranged magic, and I was stuck with her for my review playthrough. Fortunately, I randomly chose Angela, the sorceress, and Duran, the warrior, who put Riesz to shame.

Then there are characters like Charlotte, a young child who is the only key healer available to you, but who is also far and away the most annoying character in Trials of Mana. Despite her healing prowess being quite valuable, Charlotte is so annoying that you’ll find yourself avoiding her just because of her constant whining; even then, you’ll still have to deal with her at some point in the story, and that’s more than annoying enough. It’s well and truly advisable to experiment with a few characters, read up about their abilities, synergies and potential, and even start the game over a couple of times until you find a playable party that suits you the best before you launch into a complete playthough. Once you’re happy with your trio of adventurers, you’ll find that Trials of Mana ably blends real-time brawling with button-based combos, magic, and the occasional powered-up “class attacks.” You can switch between members of your party quite quickly and sink your teeth into an enjoyable, fast-paced, real-time tactical game. There’s also plenty of room for character development, equipment hunting, a bit of light shopping and even some platforming elements. Make no mistake, this is not a hardcore RPG; it’s a thoroughly enjoyable, lightweight action-RPG hybrid.

The platforming elements on offer are really the only rough edges gameplay-wise, as it’s quite easy to lose your footing and slip when jumping without making any input errors of your own, especially when you’re exploring those frustrating icy caverns. The game also bizarrely switches you into a side-scrolling view, messing with your controls and contributing nothing whatsoever to the actual gameplay. It’s not the end of the world, but it’s a strange design decision from developer Xeen that I’m surprised Square Enix let through.

Trials of Mana accompanies that gameplay with a bright, colourful visual style in both its animations and colour palette; it brings a real retro feel to the fore, thankfully without also looking like it’s just a fresh coat of paint on something old. The soundtrack sounds like a revamped ‘90s offering, and some of the melodies are definitely a throwback to the tunes that punctuated the SNES release. It all comes together to remind you that this is still a remake of a game from almost three decades ago, without actually showing the source material’s age. 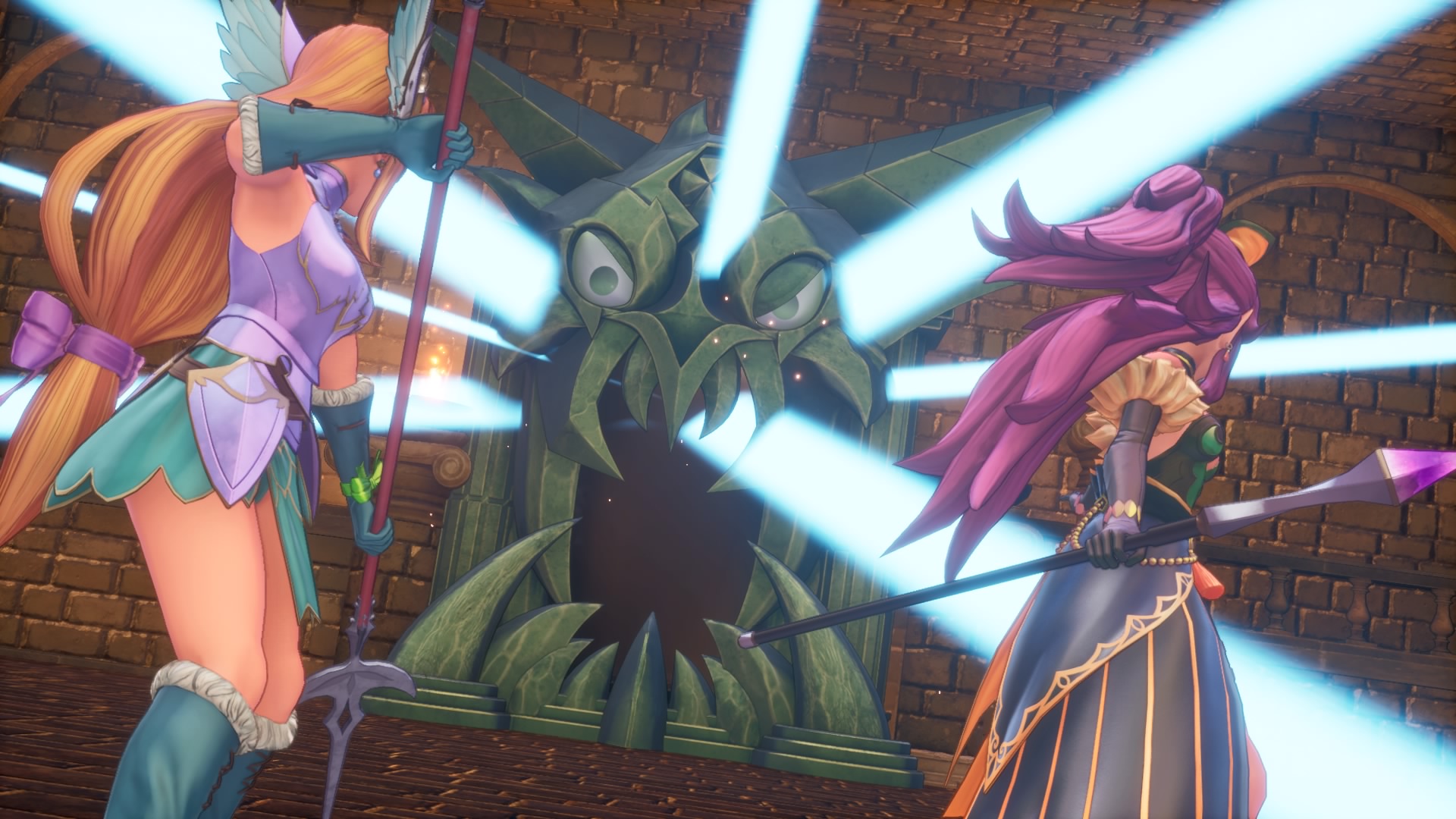 Punch a bunch before lunch

As one would imagine, given that Trials of Mana is a remake of a game that had less buttons and inputs at its disposal, its combat is quite simple. The action begins as soon as an enemy notices you and you’ll battle them in real-time, stopping time to use special items, healing buffs and spells much like in other modern RPGs. You’re awarded experience points after each battle, with bonuses up for grabs if you defeat enemies quickly, avoid damage or use special abilities. Combat is constant, so you’ll find plenty of different enemies to beat down on and help level your characters up; the opportunity to develop your skills with lots of kills is at the core of Trials of Mana’s appeal, and helps gear you up for more challenging playthroughs in the future.

Once you’re in combat, you can choose between light attacks, heavier blows, ranged spell attacks and button-based combos, all of which are constantly evolving but still manage to be easy to master. There’s also plenty of variety to be had, since you can switch between attacks, attack types and characters as you probe the enemies for weaknesses. Spells, in particular, will work better against different foes, forcing you to be careful in deciding which tools you use to bring the pain and when. Although Trials of Mana is easy enough to get into, the character progression on offer is quite uneven. This owes to the fact that character development hinges on the construct of changing classes — a construct that is poorly explained and isn’t actually available until you’ve gained the requisite levels and, in some cases, collected a certain set of items as well. This means that you might find yourself stuck at certain points, as the gameplay gets tougher and you can’t progress past a particular boss without progressing to a certain extent; instead, you’ll have to spend some time wailing on minions until you’ve managed to attain the levels, items and/or abilities you need. It’s not a huge issue, but it ensures that the balance of play doesn’t always feel right.

Thankfully, some of the special moves available to you through said progression are more than cool enough to compensate for the frustrating grind. Duran’s swirling sword-driven special move, Dark Force, is a real highlight, able to lay waste to a group of enemies instantly. Despite those occasional speedbumps, you can power through the motley assortment of opponents and the quirky bosses that front up for a fight pretty easily most of the time. It’s also worth noting that, in typical JRPG fashion, the enemies you face are often oddball creatures with silly names. The Mana staple, the Rabite, returns, but you’ll also find critters like Captain Duck and a flying weirdo known as the Tomatoman, and the villagers are often quite amusing too, with plenty of local nutbags keen for a chat showing that this is not a game that takes itself too seriously at all.

My only other real gripe with Trials of Mana is the fact that it never really explains the inventory, spell and character development menus to you — even in a cursory fashion — and so you’ll need to do some studying before you can understand how everything fits into the game. You’ll find this a little less troubling if you’ve played a JRPG before, of course, and it’s not as complex as some other RPGs out there, but elements of the interface could have been better polished.

These quibbles aside, there is a slick, easy-to-play action-RPG on offer in Trials of Mana. It’s a lush, colourful, very detailed world to work your way through, with plenty of interesting story elements to keep you going and enough new magic tricks, special moves and combos to try that you won’t ever become bored. The responsive controls are a joy to become familiar with and, even though the camera occasionally loses the best view of the action, smacking minions and bosses several shades of purple is a delight.

Although it’s got some cheesy segues, clichéd villains and repetitive moments, there’s still more than enough here to compel me to finish the game, even if only to see what kind of crackpots will face me as the bad guys get their comeuppance. 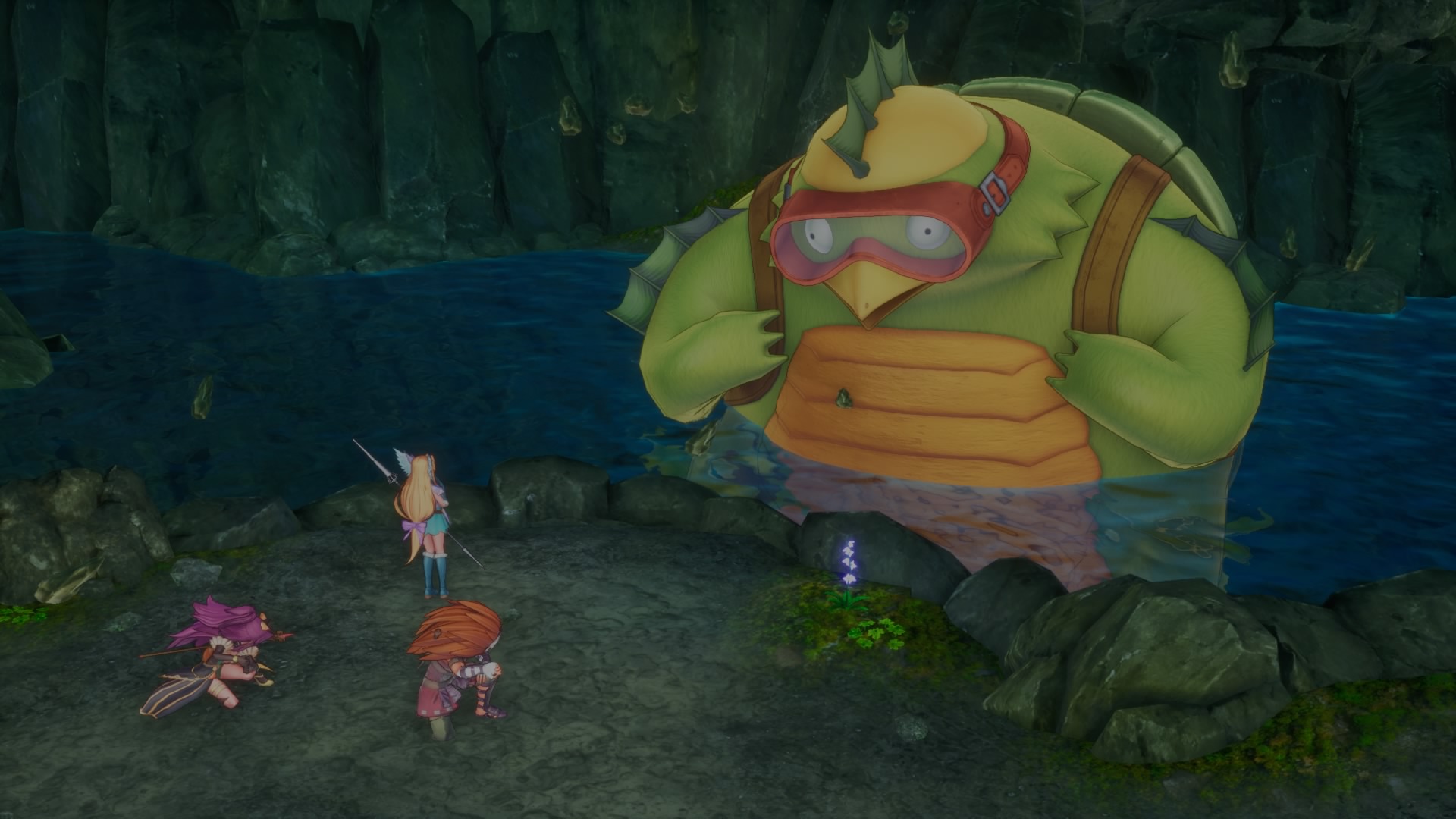 Although it might not be the game for you if you’re not already a JRPG fan, Trials of Mana has a lot of old-school charm and isn’t hard to get the hang of at all. The visuals are colourful and well-constructed, the fast-paced combat is robust and enjoyable, and it’s all come together to create a game that’s been difficult to put down.