The Price Tag for Having an Imagination

How much does it cost to “play the perfect life?”

This is a weird one for me.

Being honest, I took a massive break from gaming because life and general responsibilities got in the way late last year, and I started to feel a slight disconnect from games; I felt like the enormous price tags we shell out for less than stellar experiences weren’t worth the headache.

After a while of leaving my poor consoles untouched and unloved, I noticed that I had small pockets of free time, and I wanted to fill them with a game. Not a console game, a mobile game – but not just any mobile game: I wasn’t quite ready to invest myself into a game that would prey on my attention to detail, I just wanted something that I could pick up, play for a few minutes, and then put down again without worrying about it. With that in mind, I chose a genre I would usually never even consider…  I chose to play a dating simulator.

It was quick, it was free, and it was easy. Discreet enough that I could tap away at the options to play a fictionalized version of myself as though I was just mindlessly swiping through my phone like everyone else on the morning commute to work. I downloaded Choices: Stories You Play, a game that told me that “one choice can change everything”, and that I would be invited to “fall in love, solve crimes, or embark on epic fantasy adventures in immersive visual stories where [I] control what happens next.” 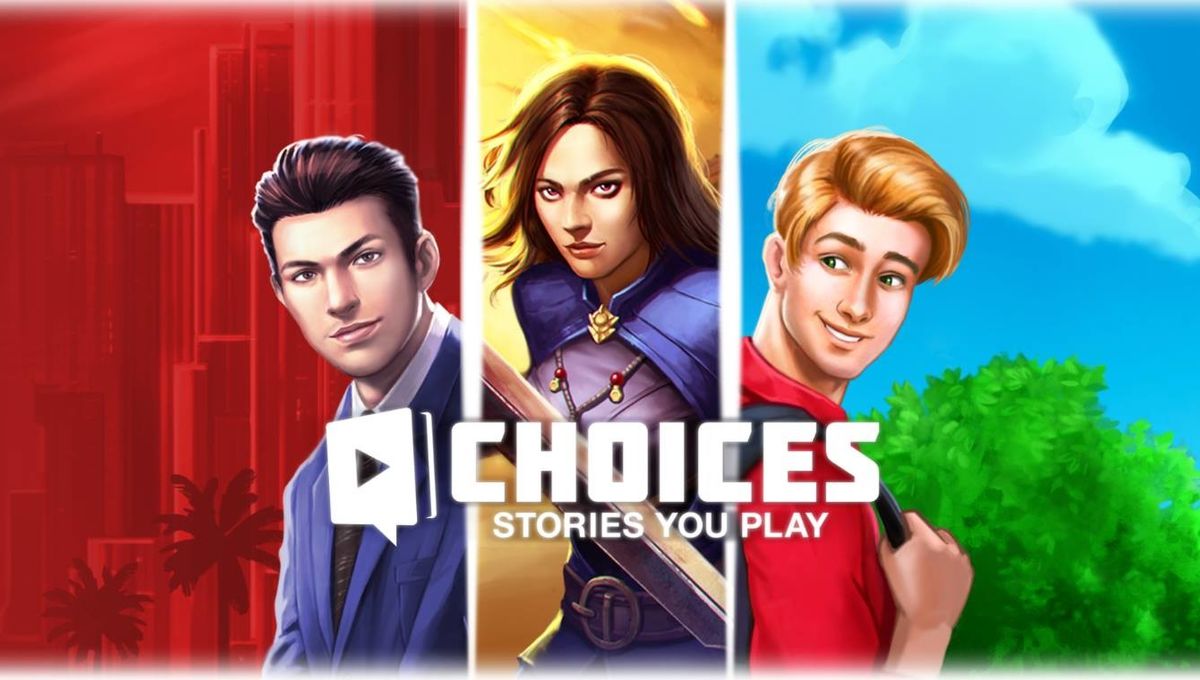 Choices tells its stories in “books”, and I looked through the selection carefully before settling on what seemed to be the most introductory book, the High School Story. The premise was simple enough: I was was the brand new student transferring into a new school, and I was going to embark on a tale of awesome high school hijinks.

As with any game that gives you the option to craft your own character, I spent a little too long on crafting my avatar’s appearance and hit the most vanilla options in an attempt to make an excellent first impression on the NPCs… and then came the first of many premium options.

“Do you want to *…*”, followed by the number of gems required to do so. Now, the game was nice enough to provide me with a small wallet of gems, so I said “fuck it, yeah I do wanna do that,” and the moment I spent those gems something almost clicked in me. I was hooked. From joining the pep-rally committee to becoming the star running back of the Football team to entering a multi-chapter relationship with class president Maria Flores, I found myself obsessing over my character’s every little adventure. The game was kind enough to allow me to progress the story and even reach higher levels without the need for those premium options, but I would never really scratch the surface of the depth of the game.

I didn’t plan to, but I found myself playing through these “books” at any point I could during the day or at night, and getting invested in the world I had created for myself in this fictional universe of data was kind of surreal. It felt real, and the more it did, the more I wanted to know what it could tell me.

Every time a tense moment came between two characters with an unlockable history, or Maria asking me for extra alone time or even a friend offering to spill their emotions and memoir onto me… I didn’t have enough gems, so I kept going down the free path. Unfortunately, when the dialogues were spoken after I’d declined the premium options, I felt guilty. I felt like I had actually hurt a real person’s feelings or missed out on memories for the ages. Somehow, it just felt personal.

Eventually, I suckered up once…or twice….or a few times for more gems and started taking the premium options only when I felt it was vital to finish the game the way I wanted, but deep down I felt like I was never taking them enough.

After downloading many more dating sims and spending more money on their preferred method of cashing in the results were the same. I felt compelled to see a complete story all the way through, not because of trophies or completion rates, but because my imagination started to care for all these people. Because of that, I was nickel-and-dimed to make it the best fake world I possibly can.

Destiny 2 saw a similar phenomenon on a much larger scale when its major expansion, Forsaken, sent players on a hunt for revenge as they track down rogue Awoken prince Uldren Sov for murdering fan-favorite character, Cayde-6. As shark-jumpy as that seemed, it got a lot of former Guardians back on board. Through cringeworthy boasts on internet message boards about how each poster would find their way to kick Uldren’s ass, people who had hated Activision and Bungie’s business tactics were now buying back in, some even purchasing the other, smaller expansions that had been released up to that point so they could catch up with the story. To fans of Destiny, Cayde-6 wasn’t just Bungie’s overrated marketing gimmick, he was a fellow guardian and friend.

Funnily enough, it’s South Park that describes this situation best. In its season 18 episode entitled Freemium Isn’t Free, the Canadian Prime Minister explains – among other things, as seem below – that games “[have] to be just barely fun. If the game is too fun, then there would be no reason to ‘micropay’ in order to make it more fun,” and that hits the nail on the head.

We see this all the time in series like Dragon Age and Mass Effect, which appear to share a similar philosophy: “you can totally finish this game and enjoy it without all the extra fluff, but just imagine all the awesome adventures you’ll get to go on if you do buy the extra fluff!”

Within MMOs, even the in-game currency has weight. You might find yourself spending your gold coins to buy that pottery wheel for the house you just bought, but now all you have is copper coins, and you can barely afford to arm yourself, so you go into either questing, sell old items or getting down to work in blacksmithing. That’s the basis of financial management and the price to have a perfect life is just as real inside as it is outside.

Sometimes, you just have to sit back and wonder if we, as gamers, are simply being taken advantage of. It’s certainly not a crazy idea given that we’ve seen Star Wars Battlefront II essentially turning loot boxes into a virtual gambling system, and free games like Fortnite: Battle Royale and PLAYERUNKNOWN’S BATTLEGROUNDS (PUBG) grossing over $14 billion in revenue exclusively through cosmetics. Although there are a couple of inaccuracies in their reasoning, Reddit user GastonBoykins outlined just a few ways that the gaming industry has slowly become one of corporate greed, and it all reeks of taking advantage of gamers’ obsessions.

Despite all of that, and despite gamers actively pushing back against the surge of in-game purchases and loot boxes in games like Battlefront II, LendEDU found that a large percentage of gamers were more than happy to continue purchasing downloadable content. Of course, 69% of those gamers mainly purchased content that actually expanded the game experience rather than cosmetic upgrades, but it sadly appears that gamers are more than content to be taken advantage of as long as they enjoy the end product.

With all that in mind, it’s hard to see exactly what pushes us to purchase this content. It could be our own intrinsic desire to find all of the hidden options, worlds and experiences, or it could just be that companies have learned to use our natures against us, blindingly leading us into our wallets by promising to tie up the loose ends that they leave in otherwise gripping stories, or it could quite simply be the desire for our in-game characters to be flashier, cooler, or indeed stronger than everyone else’s… Only for a flashier, cooler or stronger item to come out a couple of months later and awaken that desire all over again.

All I know is that after finally finishing my first three full stories in Choices, I decided it was about time to reflect on my time away from a real controller, hope my bank account survived this bout of depression, and see if I can make that same connection to the games I once gladly paid for with my weight in gold.

I totally agree about choices. That game was good but those premium choices it just seems we aren’t even getting vary small part of true story.