The Wii U was one of the only Nintendo consoles that I haven’t owned since the original Game Boy Colour — and judging by its global sales numbers, I’m not alone — so it’s been great to see ports of some of the biggest Wii U games being produced for Nintendo Switch, which is still selling strong nearly four years after its initial release. Although I haven’t played all of the ports that have come across, I welcome the fact that I and many other Nintendo fans are able to play so many great games, often for the first time, that we really only missed because the console they were on wasn’t very good.

Super Mario 3D World is one of the last AAA titles to be ported to the Nintendo Switch. However, rather than making a “deluxe” version like Mario Kart 8, Pikmin 3 and Pokken Tournament, Nintendo has bundled in Bowser’s Fury, a separate open-world 3D Mario platformer that feels like something between the original Super Mario 3D World and Super Mario Odyssey.

Given that the Super Mario 3D World portion of this game is largely unchanged, I won’t spend too much time talking about it in this review and instead focus more on the new Bowser’s Fury. However, since I never played the original Wii U game — and it comes with some small changes and additions — it would be remiss of me to omit it completely; as such, I’ve split this review down the middle so that I can discuss each gameplay mode separately. 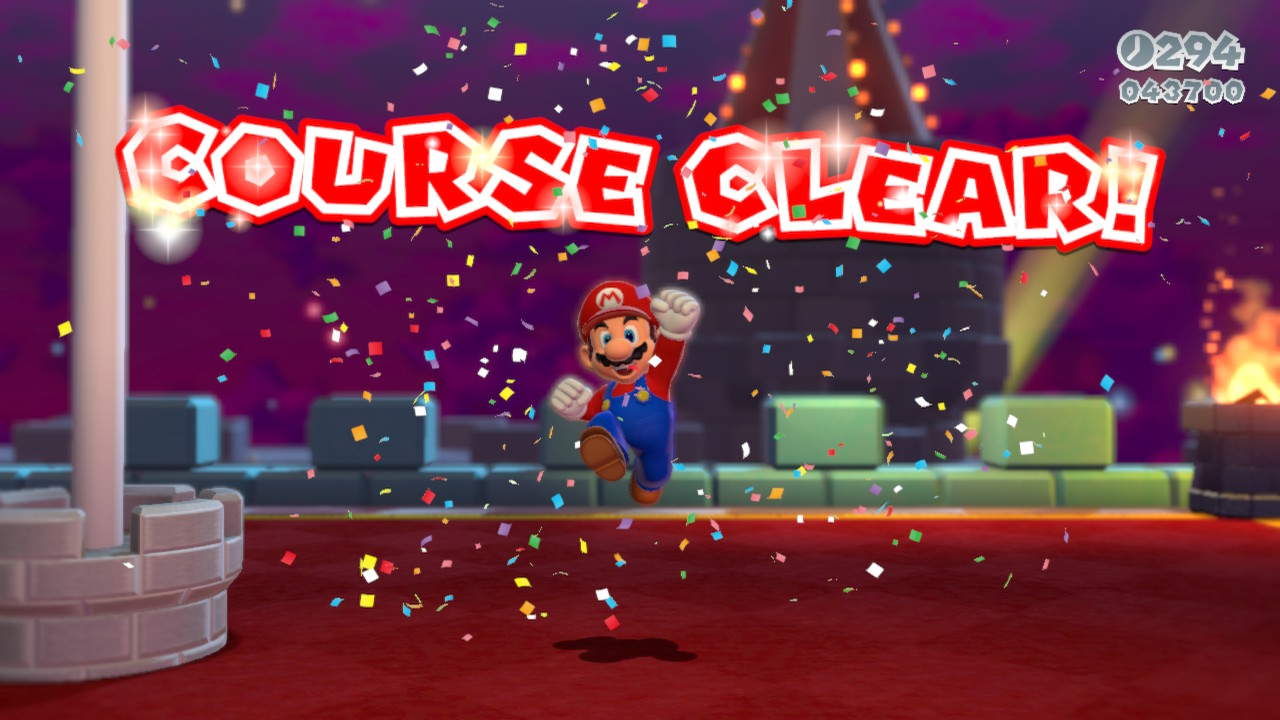 If I’m being completely honest, I didn’t enjoy Super Mario 3D World as much as I thought I would on my first playthrough. I’ve been playing a lot of Super Mario Maker 2 and I really enjoy the inspired gameplay style in that game, but 3D World’s actual mechanics didn’t really grab me the way I thought they would.

The premise is similar enough to other Mario games: although you are not saving a kidnapped Princess Peach, Bowser is again the main antagonist having captured seven small, cute, fairy-like creatures called “sprixies”. This is where my first qualm originates: the sprixies just don’t do anything. Since Peach is now a playable character, the sprixies are just there to replace her as the damsel-in-distress; despite their magical appearances, they don’t add anything to the game. I would’ve loved to have seen some sort of mechanic added to each rescued sprixie, like some new movement, power-up or even some sort of “assist” in each level. 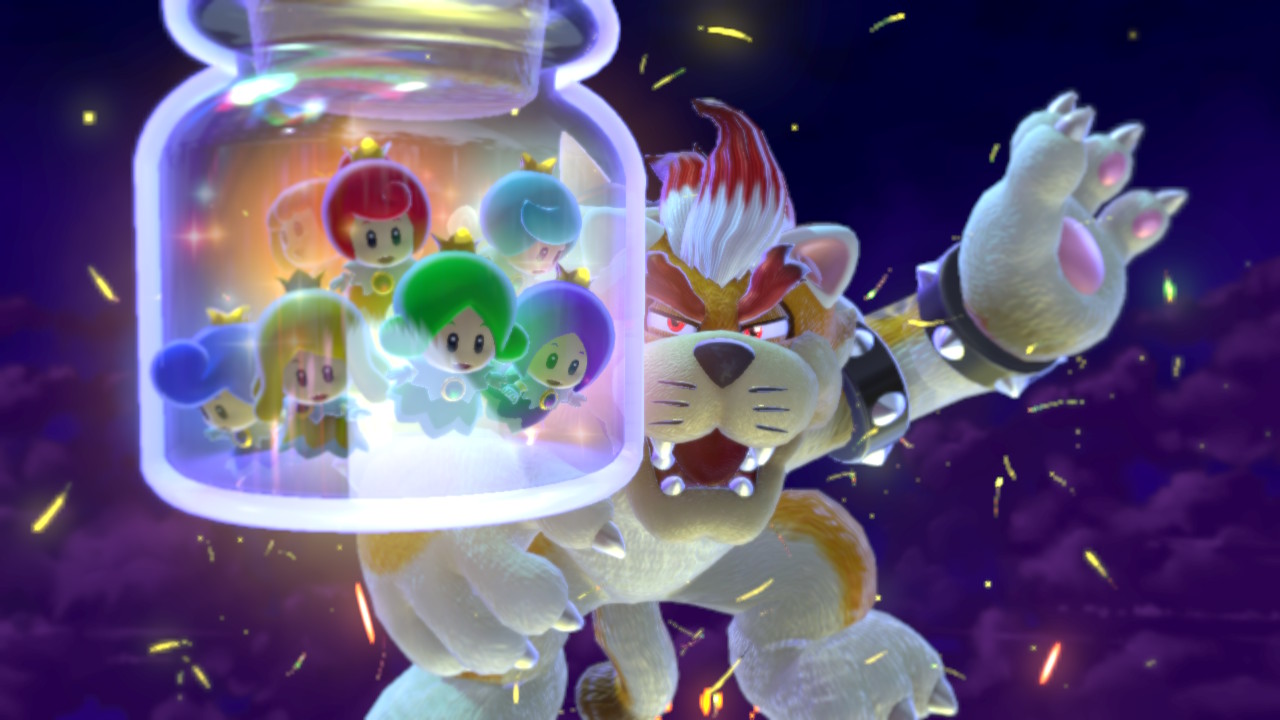 Nobody really plays Super Mario games for the plot, though — they’re all about the platforming, but sadly that’s where my second major issue is. I’m sure it simply comes with the territory of being a hybrid 2D/3D platformer, but I found some of the gameplay a little too clunky for my liking. Sure, I might just be bad at 3D video games, but I often found myself struggling to line up jumps or attacks due to the game’s odd angles and depth perception. There were some levels and puzzles that aren’t supposed to be difficult, but that became incredibly frustrating due to the game’s technical limitations. Take a look at this moment from World 3-1, for example:

That being said, I did come to appreciate and enjoy Super Mario 3D World, especially as I came to terms with the occasionally-janky controls and camera movements. Nintendo has translated the original Wii U GamePad controls really well over to the Switch, with the motion controls serving as a great replacement for a touchscreen while playing in docked mode. In fact, I found the motion controls much more comfortable; the times that I was playing in handheld mode, I found myself removing my Joy-Con and standing my Switch up freely so I could use motion controls instead. It just felt much more natural during gameplay.

It’s a small update, but the Switch port also adds the Super Mario Odyssey-esque movements of mid-air rolling, as well as immediate rolling or jumping following a ground-pound. Although these don’t add anything substantial for the everyday player, they’re welcome updates.

I really enjoyed the collecting aspect of Super Mario 3D World, too. The level select map features a very user-friendly method of showing which levels you have collected all of the hidden stars and stamp, and hit the top of the flagpole at the end. This made it really easy to quickly identify which levels I needed to replay on my second time around.

Finally, Super Mario 3D World also features well-integrated multiplayer mechanics. Up to four players can join a level at any one time, racing and working together to reach the flagpole. Where the original game only featured local multiplayer, however, the Switch version now includes online multiplayer — a welcome addition in 2021. Furthermore, the Captain Toad puzzle levels now support up to four players as well, where originally they were limited to just the host. Although I haven’t played much multiplayer yet, the new online capabilities are great to see.

Overall, Super Mario 3D World is a nice addition to the Super Mario universe. It doesn’t add too much in terms of plot and storyline, and the camera controls and character movements don’t always feel too fluid, but the game itself is quite enjoyable and provides a fun, very replayable few hours of Mario platforming. 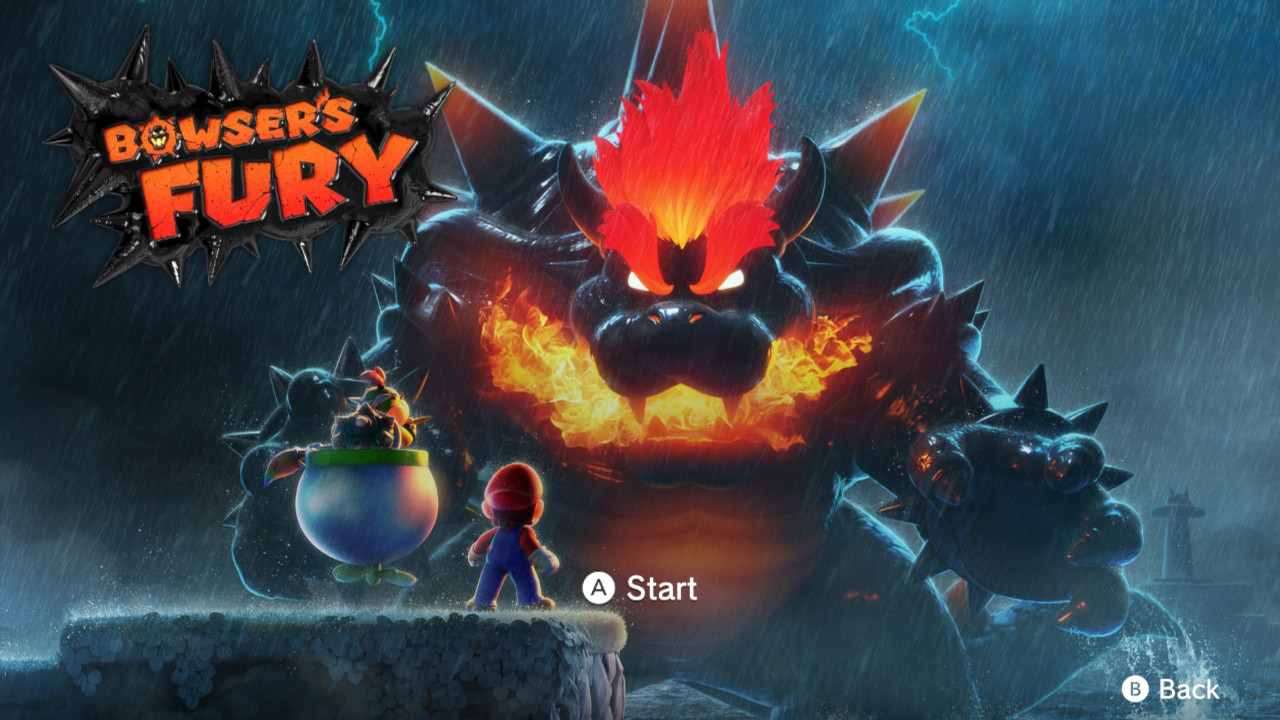 I’m sure I’m not the only person to think that Bowser’s Fury is the standout section of the Super Mario 3D World Switch port. There is a sense of familiarity that comes with it, feeling much more natural and finessed than the main 3D World gameplay, which is largely due to the fact that Bowser’s Fury is far less hybrid platforming and is much closer in style to other 3D titles in the Super Mario franchise, like Super Mario Galaxy and Super Mario Odyssey: there are no fixed camera angles and movement feels far smoother and refined. That said, I really enjoyed that Mario’s movement and physics stays consistent across both games.

In Bowser’s Fury, Mario teams up with Bowser’s child, the (so originally) named Bowser Jr., to stop King Bowser from corrupting Lake Lapcat with a dastardly black sludge (á la Super Mario Sunshine or Paper Mario: Colour Splash). Mario and his new sidekick must travel around an archipelago of small islands to collect “Cat Shines”, which in turn unlock “Giga Cat Bells”. However, Bowser has other ideas and will rise out of the black sludge every few minutes as Fury Bowser (see what Nintendo did there?), ruthlessly attacking everything in his path with fire blasts and meteors. These attacks last for a few minutes or cease whenever Mario collects either a Cat Shine or a Giga Cat Bell, which transforms him into the Super Saiyan-esque “Giga Mario”. 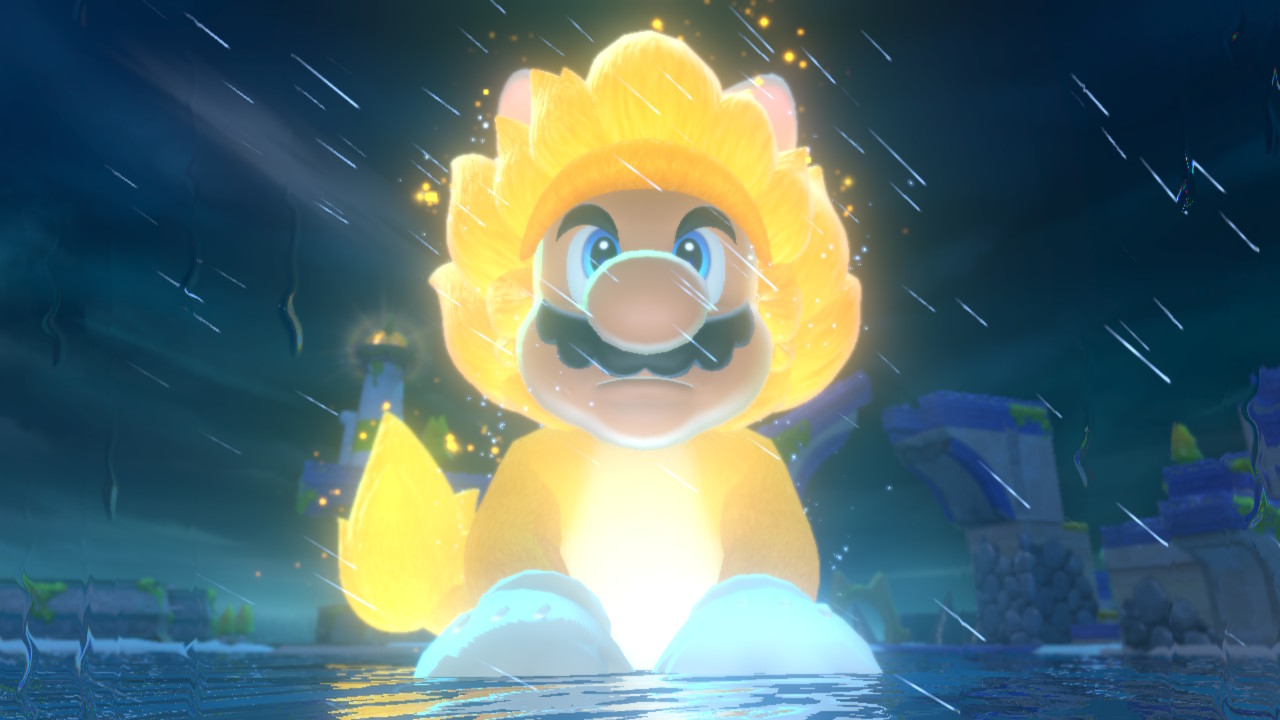 I didn’t hate the idea of Fury Bowser coming out and storming Lake Lapcat every few minutes, but I did find it frustrating once I had beaten the main storyline and was focused on collecting the rest of the Cat Shines. I would have preferred a longer cooldown once the main story was completed, just to have more time to focus on the actual platforming.

It’s obvious that Bowser’s Fury revolves around the major new power-up that 3D World brought, the Cat Suit, but I didn’t find that the gameplay mechanics actually focused on it very much, which I actually really liked. I found the plethora of feline references (especially post-game) to be quite smart and funny, but I appreciate that the gameplay didn’t rely solely on this single Mario form. I also enjoyed the small quality-of-life features that Bowser’s Fury included, making it feel much more refined and well thought out. Specifically, I liked the banking of multiple power-ups; the fact that I could choose between one of five Mario forms at any time added a level of strategy I wasn’t expecting to need.

What I didn’t like about Bowser’s Fury, however, was how handhold-y it felt in the lives department. Much like Super Mario Odyssey, there is no real caveat to dying; you simply lose 50 coins. It’s true that you gain a spare power-up for every 100 coins you collect but I found out very early on that it wasn’t difficult to keep a stockpile of these, so there was no real desire to seek out each and every coin in order to stay alive. Just as an example, it might have been better if dying meant that you lost some or all of your backup power-ups. This would give a greater sense of urgency to collect coins and more incentive to think through their movements throughout the map.

Bowser’s Fury is a great spin-off to the Super Mario universe with a much deeper storyline than Super Mario 3D World (as relevant as that is in a Mario title). The controls feel very polished and, despite there being no real consequence to dying, the platforming has a nice level of difficulty.

Super Mario 3D World + Bowser’s Fury is a neatly refined Nintendo Switch port that makes some appreciated updates to the original Wii U title. It’s great to have yet another 3D Mario platformer on a current-day console, while Bowser’s Fury is a great episode of jumps, twirls and enemy-bonking that all 3D Mario fans will enjoy.