Pillow Castle’s Superliminal is a first-person puzzle game similar to the evergreen Portal, centred around the old adage that perception is reality. Released on PC back in 2019 and now on consoles, Superliminal occasionally struggles with the weight of its own ambitions, but when the elements come together in just the right perspective (get it?), it delivers a solid experience that will put a smile on anyone’s face.

You play as a research participant in Dr. Glenn Pierce’s Somnasculpt dream therapy program, which involves completing numerous puzzles through a total of eight “dreams” (read: levels). Of course, something goes wrong during your therapy, leaving you unable to wake up and at the mercy of the Somnasculpt’s AI — again, not too dissimilar to Portal. Aside from a nice twist at the end that helps distinguish it from Portal and other stories involving faulty technology, though, that’s about as far as the narrative goes; that may annoy some people, and it may put a damper on your enjoyment of the game, but it didn’t have that effect on me… that honour goes to the gameplay.

Superliminal’s gameplay revolves around solving puzzles using forced perspective, with two main tools available: the first of these tools allows you to pick an object up, move it closer or further away while at its current perspective, and then see it scale up or down when you put it down, based on its new location. This allows you, for example, to create an object large enough to hit two switches at the same time. The other tool is related to the famous trompe-l’œil optical illusions — another form of forced perspective that sees a two-dimensional image become a real, usable object if you look at it from just the right angle. Superliminal does employ those tools in fun, innovative ways, but I often found myself wanting more abilities and more ways to interact with the environments it put me in.

Outside of that, it doesn’t have much more to offer in terms of gameplay techniques. There are teleporters, fun use of lighting and some cloning tools, but those are all restricted to small segments and you’ve seen everything there is to see after you complete the fourth level. Don’t get me wrong, the mechanics on offer are definitely enjoyable, but it would have been nice to have some more variety across the game’s eight levels. 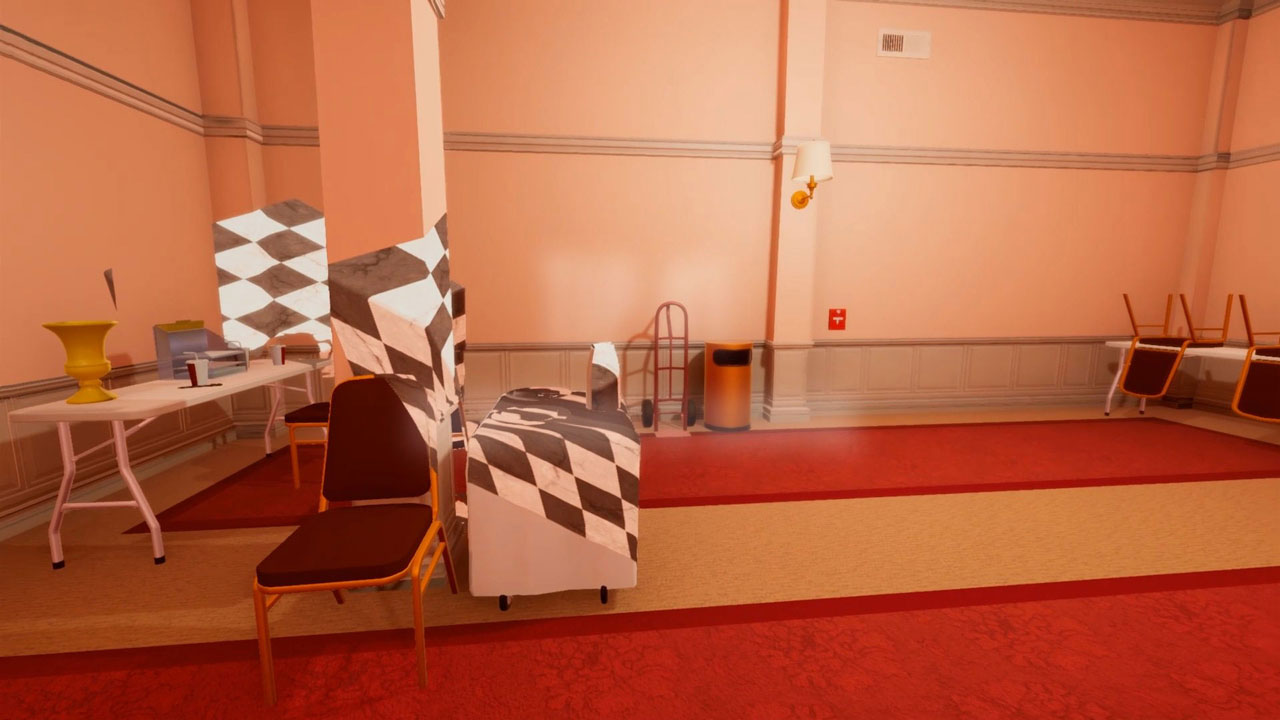 The levels themselves are incredibly interesting. I don’t want to spoil them, but one of my favourites involves a very clear horror aesthetic with a host of visual gags throughout. I just wish that the game wasn’t so short: each of the eight levels takes roughly 20 minutes to complete, meaning that a player who picks up Superliminal’s mechanics and tricks quickly can complete the whole game in one sitting (especially if said sitting is lengthy). Granted, bloating this particular game too heavily may have driven players insane, as some of the puzzles are genuinely quite difficult; I do recall showering one particular puzzle with expletives during my playthrough, but most of them are thoroughly enjoyable and all tap into the game’s unique premise as a perspective-based puzzler. I have no doubt that Pillow Castle would have something really special on its hands if it was able to expand the concept even further.

Superliminal’s graphics are fairly standard, employing simple shading and textures to reduce technical strain in some of the more intense sections — Pillow Castle has even used this apparent limitation in some really unique ways later on in the game, but Superliminal does also have some minor graphical bugs where objects will clip in and out of existence. Those issues didn’t occur too often and they were never bad enough to put me off, but they mostly accompanied radical changes in the camera angle; it took me a few instances to realise that this was a glitch and not just some new mechanic to help solve a puzzle.

The game’s controls can also be finicky at times. Superliminal gives players the option to rotate objects along the x-axis, but never the y-axis, which becomes frustrating when you’re trying to solve certain puzzles and find that the object you’re moving is not moving where you want it to. It’s a shame, too, because allowing players to move objects along both axes would have opened up more puzzling and mechanical opportunities. 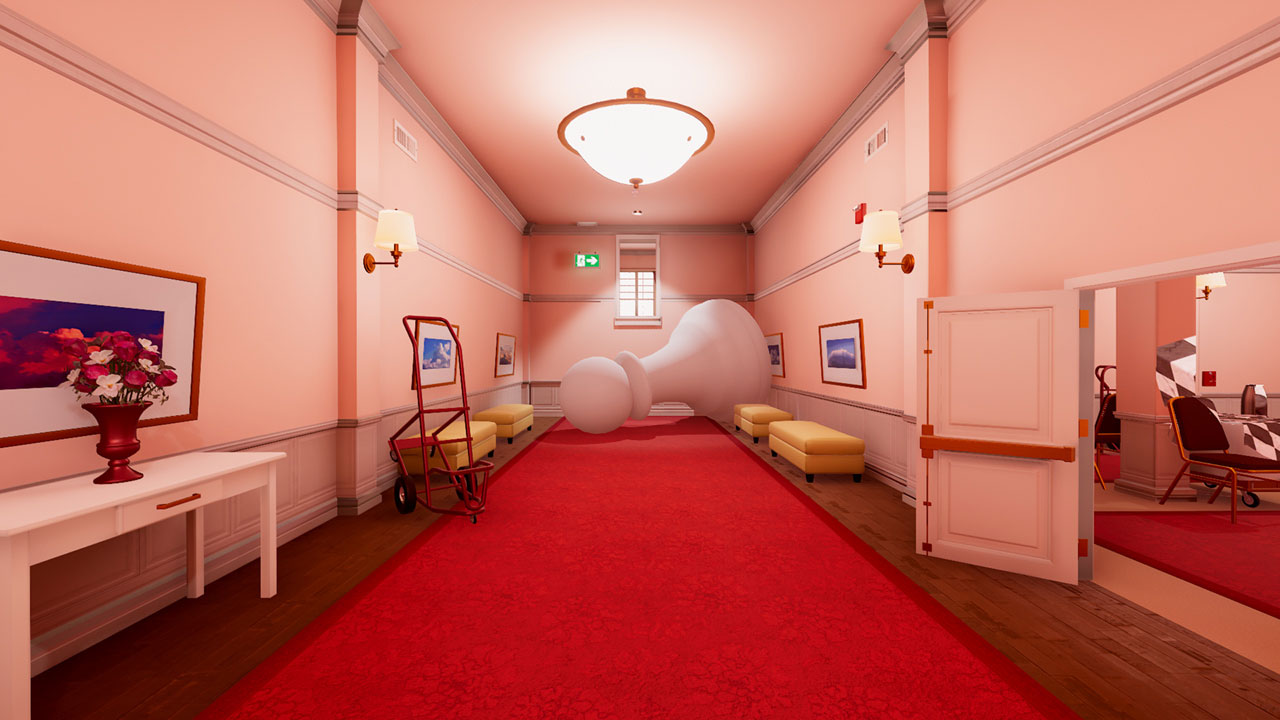 Pillow Castle’s decision to use a slow-jazz soundtrack helps to keep you relaxed and at ease during some of the more difficult puzzles, but that peace of mind is at odds with the game’s story: you’ll often see signs explaining the danger you’re in, telling you that you have to wake up, obviously attempting to keep the player on edge, but then you’ve got a slow, peaceful, relaxing soundtrack that’s actively discouraging that panic. It’s perfectly fine once you see the game’s ending, but as enjoyable as it is, the soundtrack spends most of your playthrough actively pushing against the game and level design, which makes everything feel a little disjointed.

With that being said, the game is good value for money at AU$27 for eight well-designed levels, but Superliminal is another in the long list of puzzlers that really struggle with replay value. The story has a great message about perseverance, but it doesn’t really encourage a second playthrough and the series of achievements on offer weren’t enough to incentivise me to return to its world. I did enjoy my time with Superliminal, though, especially as someone with a background in psychology, and I’m extremely interested to see where Pillow Castle takes the idea next.

Superliminal is a fresh, novel take on the first-person puzzle genre, and although it’s a little on the short side with some minor technical limitations, it’s a well-designed game that uses its mechanics in innovative ways. It’s sure to provide a fun challenge for most puzzle enthusiasts.

[…] allows players to build their own stages and puzzles using assets and mechanics from the game George called a “fun challenge for most puzzle enthusiasts”. It’s live on Linux, MacOS and Windows (through Steam), and will be available on “other PC […]