With everything that’s going on in the world at the moment, Summer in Mara offers up a relaxing change of pace as you set out on a unique farming adventure in a beautiful, tropical archipelago. Spanish-based developer Chibig received more than ten times its funding goal for the game on Kickstarter, and it’s easy to see why: it’s the closest a video game has come to the charm and freedom of living in the world of Studio Ghibli’s Ponyo.

Summer in Mara casts you in the role of young Koa, tackling the responsibilities of maintaining an island ecosystem, scouring the ocean, making friends and working to ensure her hunger and stamina levels never cause her to pass out. Having been raised by her grandmother, Koa is left to fend for herself in a world that has strong opinions about the incapability of young, but only she can make any changes for the better.

Your adventure begins when a stranger washes ashore on your island, unable to communicate and in need of help. Therein lies Koa’s entire motivation for everything she does — to help others, connect communities and improve the world of Mara even when it comes at a cost to her. To do so, you build your island by adding structures and cultivating crops to make or bake new treats, all to impress and help the many colourful characters you encounter. 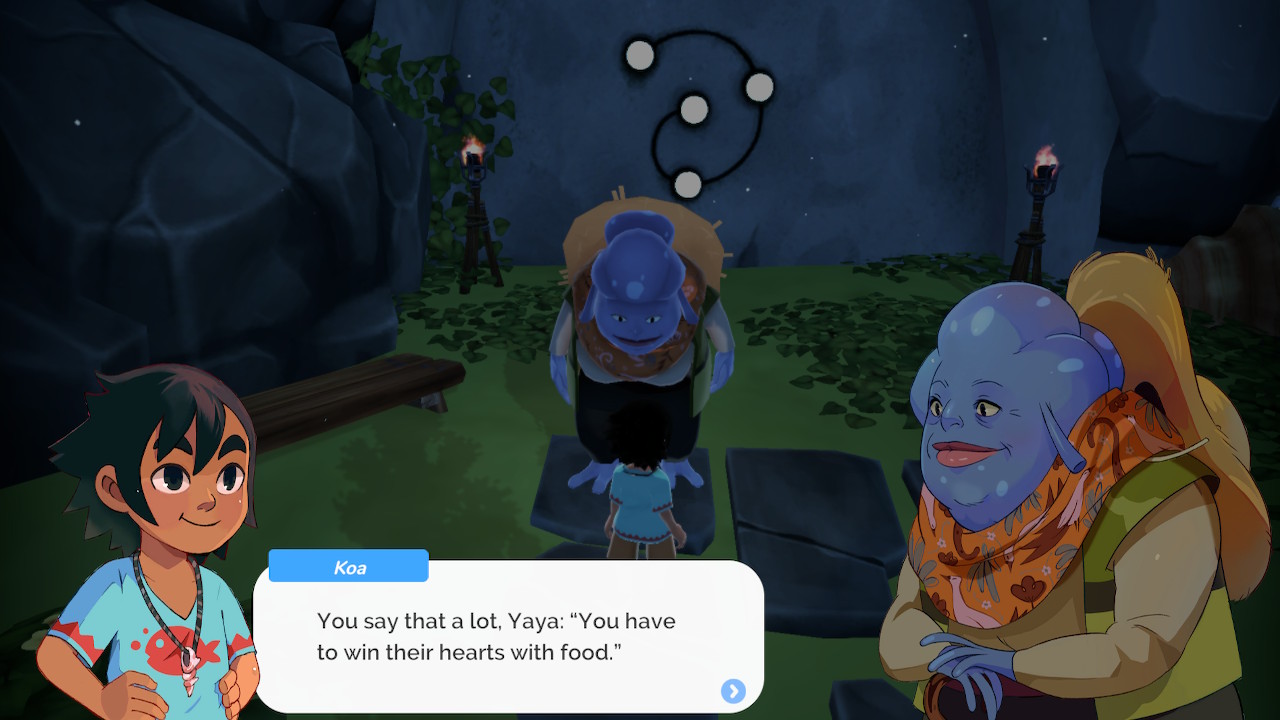 Summer in Mara is aggressively charming.

Given that it’s a completely non-violent adventure that focuses on crafting, communication and economy, it almost goes without saying that Summer in Mara’s plot develops at a glacial pace. In a game without any combat, platforming or puzzles, most every quest ends up being a fetch quest. Summer in Mara has more than 300 quests, but the vast majority of them boil down to collecting x resources or y money, or getting your hands on a crafted item using x and y. It becomes a little mind-numbing when the only place you can actually craft is on your home island and there’s absolutely no fast-travel option. It’s a real shame, though, that Chibig never diversified more of the quests with some of the other mini-game elements; it’s a joy when the game finally sends you diving for items, hunt down a specific fish, or — even more rarely — “go to an island and interact with it in a special way”.

When the archipelago finally opens up after an unnecessarily long tutorial sequence, individual exploration falls a little flat. There are more than 20 unique islands to explore in Summer in Mara, yet there isn’t anything to be gained from them unless an NPC tells you to go there. Every island has its own resources for you to respectfully harvest but nothing special. There were no hidden caves with the rarest fruit, no secret quests, and the one gag island that you encounter early on doesn’t have any further part in the game.

Summer in Mara plays like the accidental love child of Animal Crossing, The Legend of Zelda: Wind Waker and Stardew Valley, taking traits from all three but not quite nailing any one. Summer in Mara truly shines when you return home to the private tropical island and the daily cycle of chores and rewards becomes the focus. Start the day by fertilizing and watering your fields, feed some animals, pick fruit and plant trees, move on to some mining then scour the beach for flotsam and shells before giving an offering to the island protector and turning in. The cycle is simple but engaging, resources reappear every morning and there is an almost unrestricted freedom to where you can build structures or plant trees (crops must be planted in set fields, though). The more you play, the more access you have to diverse flora and fauna so your personal island truly does become a relaxing haven to return to, although it would have been even more relaxing if you could fast travel to it.

Standing as Chibig’s fourth release, Summer in Mara definitely bears some influence from its predecessors in the studio’s library. Chibig developed Ankora and Tiny Planet for Android and iOS before rebooting the latter to PC and PlayStation 4; Summer in Mara shares visual assets with those previous games, but it’s also in a connected universe. As such, it feels very much like a mobile game. Despite its incredible size and dynamism, the economy had me waiting for a pop-up to offer me some kind of premium option for real-world money, and some of the steps it asks you to take in quests feel like the kind of filler content you see in a mobile game either to pace you through the story and keep you coming back or to keep you occupied while you wait. Fortunately, those mechanics didn’t find their way into Summer in Mara, but Chibig would have done well to cut down on the pointless filler content. 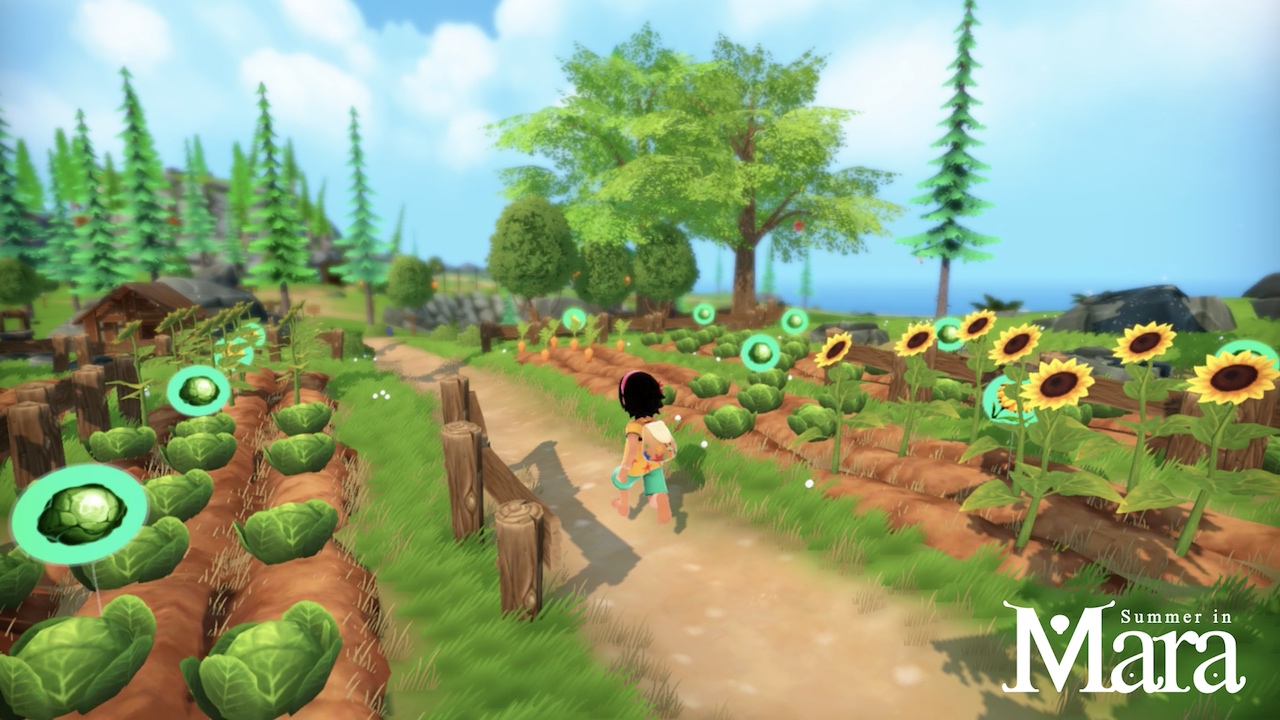 Relax and unwind at your very own tropical getaway!

It is unfortunate that I cannot comment on how the game wraps up or keeps things interesting as I encountered a game breaking bug after around 30 hours of gameplay. Despite the tedium I was genuinely enjoying Summer in Mara, as someone finally representing a big-bad had shown up and things looked like they were picking up steam. Players have reported plenty of other bugs since the game’s release on June 16, which has marred the release a little, but Chibig has not been idle. The studio of just five developers has been busy creating dialogue with the community, hearing and responding to player feedback, and providing a roadmap for upcoming fixes, which includes fast travel points and more crafting locations (which is an absolute blessing).

Much like Animal Crossing and Stardew Valley, Summer in Mara is a game to be taken slowly and enjoyed at your own pace. Relax on your island as you prepare the ingredients for the next quest and enjoy the beautifully crafted dialogue from wholesome and diverse characters. While I won’t be starting from scratch to see how Koa’s story ends, I will be keeping an eye on Chibig’s community addresses so I can set sail once again when my issue is patched.

Summer in Mara is an excellent option if you are still coming down from a fresh Animal Crossing addiction and need some peaceful gameplay. Its charm and beauty do tick a number of boxes, but Chibig still has a number of rough edges to smooth out.