Though 1994’s Van Damme-led Street Fighter: The Movie has always attracted the majority of attention – and not for positive reasons – it’s often forgotten that it wasn’t the only adaptation of Capcom’s all-conquering fighting game franchise to be released that year. Animation studio Group TAC’s Street Fighter II: The Animated Movie actually beat Hollywood to the, um, punch, by coming out in August 1994, four months ahead of the more notorious film.

Setting out its stall from the first frame, it opens with one of the most famous moments from Street Fighter lore, the fateful clash between Ryu and Sagat in which the latter receives his famous chest scar. From here, the plot proper kicks in as Interpol agent Chun-Li sets up an alliance with Guile and the US Air Force to take down the criminal organization Shadowlaw, led by despot M. Bison. Guile is out for revenge on Bison for the death of his best friend, though is eventually swayed into relenting by the duty-driven Chun-Li (who herself has beef with Bison over killing her father).

Note: The film actually uses some characters’ original Japanese names, so here Bison is called Vega, Vega is called Balrog and Balrog is Bison. However, for the purposes of this article we’re sticking with the better-known Western names. As our heroes seek the destruction of Shadowlaw, Bison and his cronies are on a recruitment drive, using monitor cyborgs to seek out the world’s most powerful martial artists. This leads them to Ryu, who immediately becomes Bison’s primary target for acquisition. However, when Ryu proves an elusive quarry thanks to his roaming lifestyle and ability to suppress his own ki, Bison latches onto the next best thing: his best buddy and occasional rival Ken.

Bison captures and tortures Ken, turning him into a puppet of his Psycho Power. As you’d expect, much fighting ensues, Ken manages to break Bison’s mind control, the Shadowlaw base is destroyed and the good guys win. The film ends with Ryu resuming his wandering of the world, only to be jumped by Bison in a truck (don’t ask me). Credits.

Like the live-action film, The Animated Movie ditches the tournament premise of the game in favour of a more thriller-like premise, putting the more espionage/militaristic elements front and centre. This again creates an imbalance in what characters get the majority of attention, with the majority of Street Fighter’s hefty cast being relegated to glorified cameos (though at least T-Hawk gets to actually fight a bit this time). However, while the live-action effort is more focused on squeezing the property into a more light-hearted and multiplex-friendly mold, Group TAC takes this stuff deadly seriously. The Animated Movie is easily the most canon-faithful of the Street Fighter adaptations, to the point where its 102-minute runtime almost bursts at the seams. There’s a lot going on here, with twists and intrigue happening at a breakneck pace that only lets up in the excellently-handled flashbacks chronicling Ryu and Ken’s training and early friendship. While the film ultimately succeeds in keeping track of who’s on what side and what everyone wants, narrative clarity is sometimes lost while getting there.

To be fair, though, the film also has to make room for fight scenes, and The Animated Movie contains some of the best sequences in all of Street Fighter’s history of adaptation. From the opening bout between Ryu and Sagat, to Chun-Li and Vega’s brutal apartment tussle (minus gratuitous T&A, which we’ll get to in a minute)  to the rollicking climactic three-way ruck for to free Ken and vanquish Bison, the fighting is wonderfully choreographed (by K-1 founder Kazuyoshi Ishii and professional fighter Andy Hug) and animated, and most importantly does justice to the characters’ special moves. No “flash of single white frame” or “thrust kick” crap here: the characters show off their full repertoire in their superpowered glory. It’s a shame that we don’t see more of the other characters, but it’s understandable in a movie that’s already straining to fit this amount of lore into its run time. At least the characters feel true to their video game counterparts in terms of personality, something over which the live-action version runs roughshod. Everyone’s personality feels correct, and the film even enriches some of them, like with Honda’s sense of humour, or the bro-love between Ken and Ryu which becomes the heart of the film.

The only sour note is Chun-Li’s depiction, which seems to lose focus on the character as the film progresses. She starts off very much the model Interpol agent, resourceful, cunning and powerful, but once Guile enters the scene, arguably usurping her lead protagonist status, she becomes more a giggling comic relief. While the videogame version always had a bit of whimsy about her (“ya-ta” and all that), the lore always made clear that she was a cop first and foremost. Here, she becomes Manic Pixie Spinning Bird Kick… and then there’s the boobs. 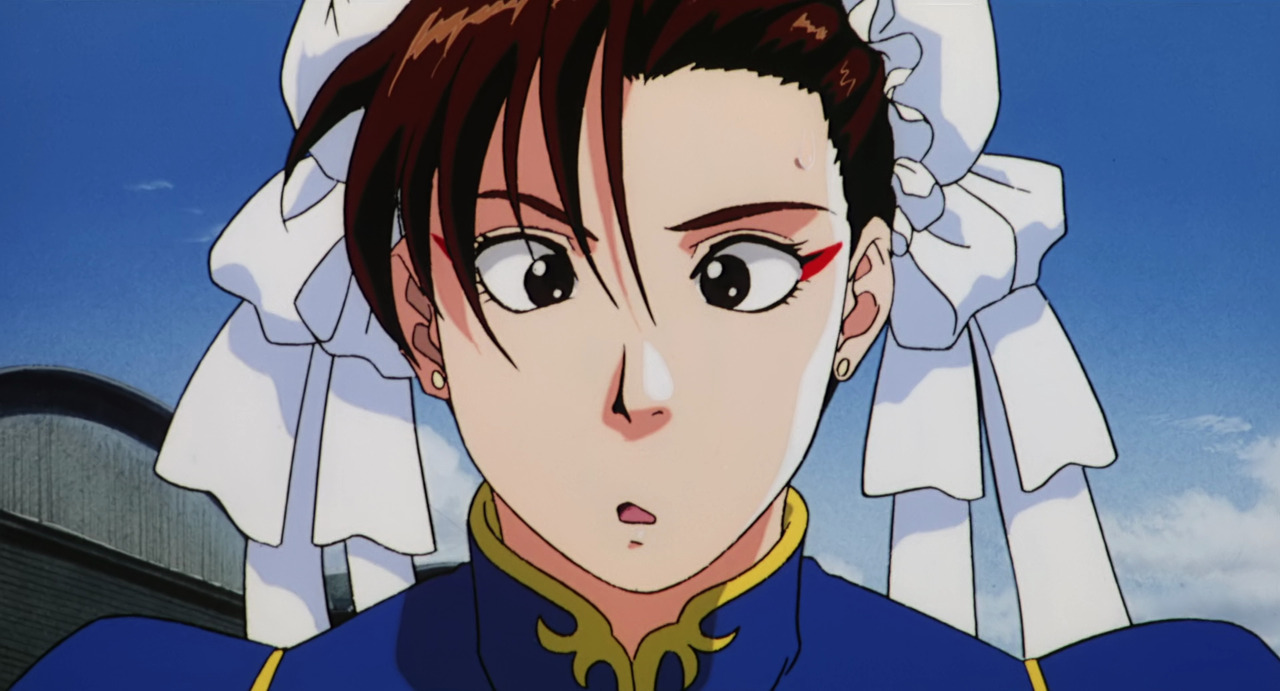 Yeah, you all know this was coming. For all The Animated Film’s successes, it’s most notorious for that shower scene, and time has not been kinder on it. What sticks out on watching it again is just how tonally jarring the sequence is in a film which is already doing well by taking the lore and characters seriously. It being immediately followed by semi-naked Chunno getting the piss beaten out of her by Vega only adds an unneeded ickiness to a great fight scene.

That aside, the film pretty much set the template for Street Fighter storytelling going forward. Capcom also released a tie-in game named Street Fighter II MOVIE, in which you play as one of Bison’s cyborgs. Unreleased in the West, it’s rarely referenced these days, which is unsurprising given the scant footage of the game that exists online.

Street Fighter II: The Animated Movie proved that you could pull off effective Street Fighter storytelling in animation with few of the concessions made for live-action. While it’s remained very much a cult favourite, it’s been hugely successful in its many home video releases. Its inclusion in the 2004 Street Fighter Anniversary Collection introduced it to a whole new generation of fans, sustaining its legacy in Street Fighter canon.

[…] Cav made his latest entry into the Press X to Adapt series, discussing how although the live-action adaptation got all of the attention, Street Fighter II: The Animated Movie is the 1994 Street Fighter movie that deserves all of the resp…. […]