Star Wars Jedi: Fallen Order does a lot of things right and a few things wrong. What stands out the most, though, to the point that it’s actually distracting, is just how obsessed the game is with preparing a sequel. It’s so laser-focused on setting the table for Cal’s next adventure that it drags down the entire thing.

Fallen Order is somehow too much of a prologue, and you see it all over the place. 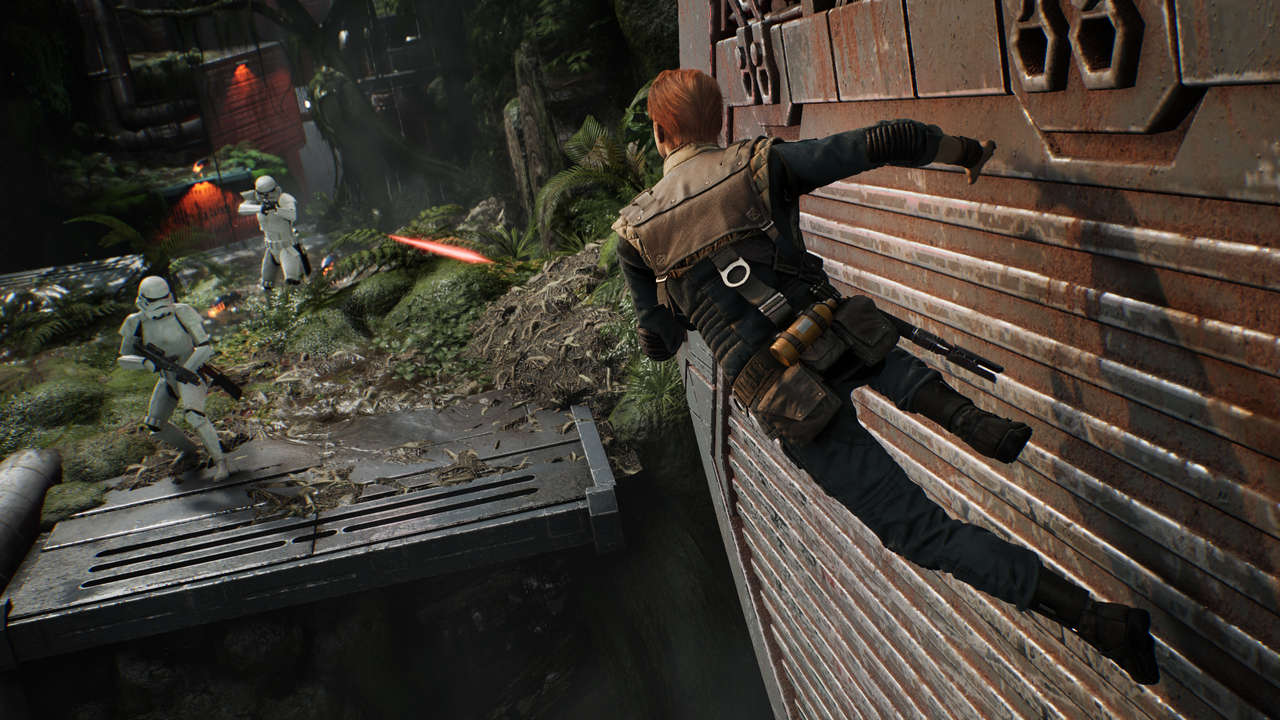 Too much Souls, or not enough?

Fallen Order doesn’t try to hide that it’s inspired by FromSoftware’s Dark Souls series. The moment-to-moment gameplay, bonfire-style checkpoints, unlockable shortcuts and souls-like experience points that you have to go fetch when you die – there are a lot of obvious similarities. So, it’s hard not to compare Fallen Order with how massive and varied FromSoft’s games are, and it’s not to the game’s benefit.

While Souls titles last for around 30 hours each (usually longer, sometimes shorter), Fallen Order takes around 15 hours. It features five full-sized levels across five planets, with one extra level that’s totally linear and feels procedurally generated in its samey-ness. Compare this with the Souls series, each with dozens of interconnected levels that are, on average, bigger and more varied than those in Fallen Order. Fallen Order is also fast-paced and while it’s mostly for the better, this also helps each level feel briefer.

This isn’t the best comparison when Fallen Order is closer to a Sony-funded single-player title than something like a Souls game, where money is aimed at the production values and polish instead of a wide range of content, but the similarities to FromSoft titles and the inevitable comparisons these draw are hard to shake off. While I get that Star Wars movies usually have, like, three planets each, Fallen Order’s smattering of locales seem more like a taste of something bigger. 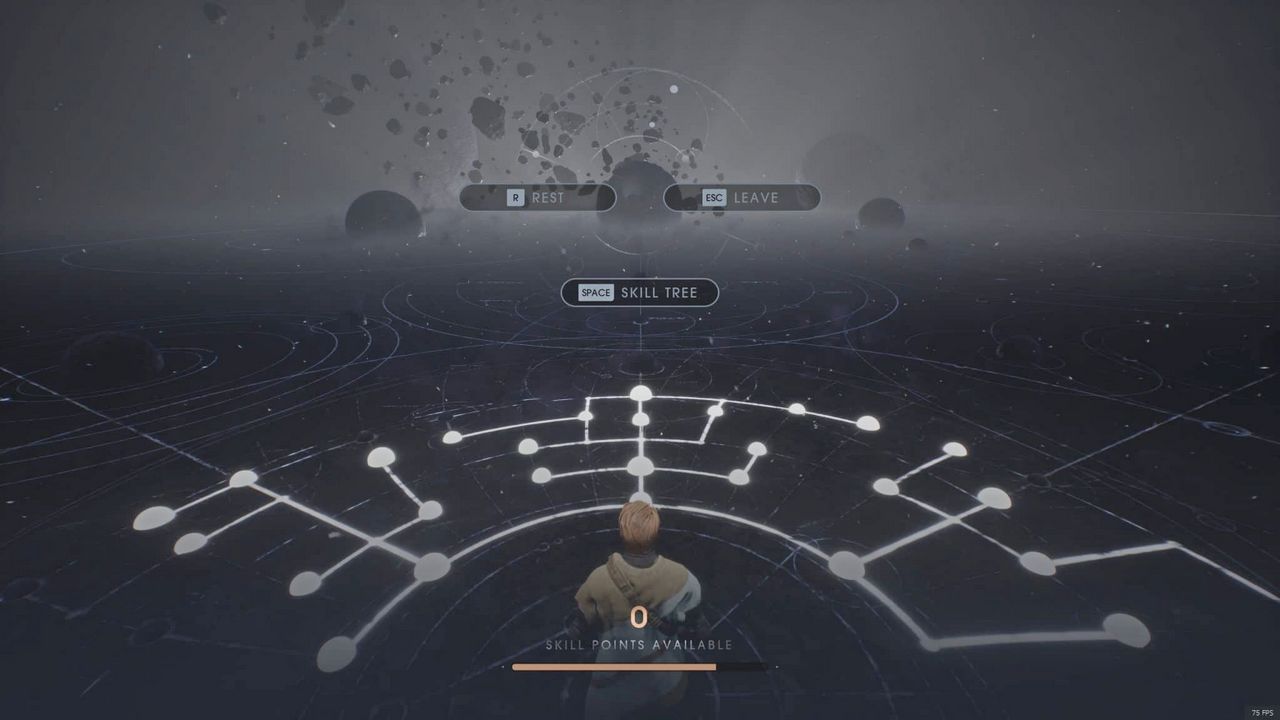 Fallen Order’s skill tree, which you access from Souls bonfire-likes called Meditation Points, branches out in three directions: there’s one for Force powers, another for Lightsaber skills, and the last for defence-related Survival abilities. But if you look closer at the skill tree from the main screen, each branch seems to reach out even further into the background – branches that you can never actually access.

To me, this screen seems designed with a sequel in mind. When the next game releases, players can notice the design as an easter egg, as connective tissue between the two titles. Noticing it now, though, years before a sequel is out, it only makes the game feel shorter and, in a way, incomplete. I thought that Fallen Order would suddenly open up as I unlocked more skills and had still only visited five planets. Especially when the existing skill tree itself opens up with new skills to unlock as you progress through the story, it’s easy to assume.

I think this was meant to help frame Fallen Order as the start of Cal’s journey. At the same time, though, Fallen Order’s skill tree feels like a set of training wheels; while this aligns well with the story, it’s frustrating in-game. Respawn seems to tease a more expansive skill tree, maybe one that leads to proper RPG-style builds – but not in this game. It’s hard not to be disappointed. 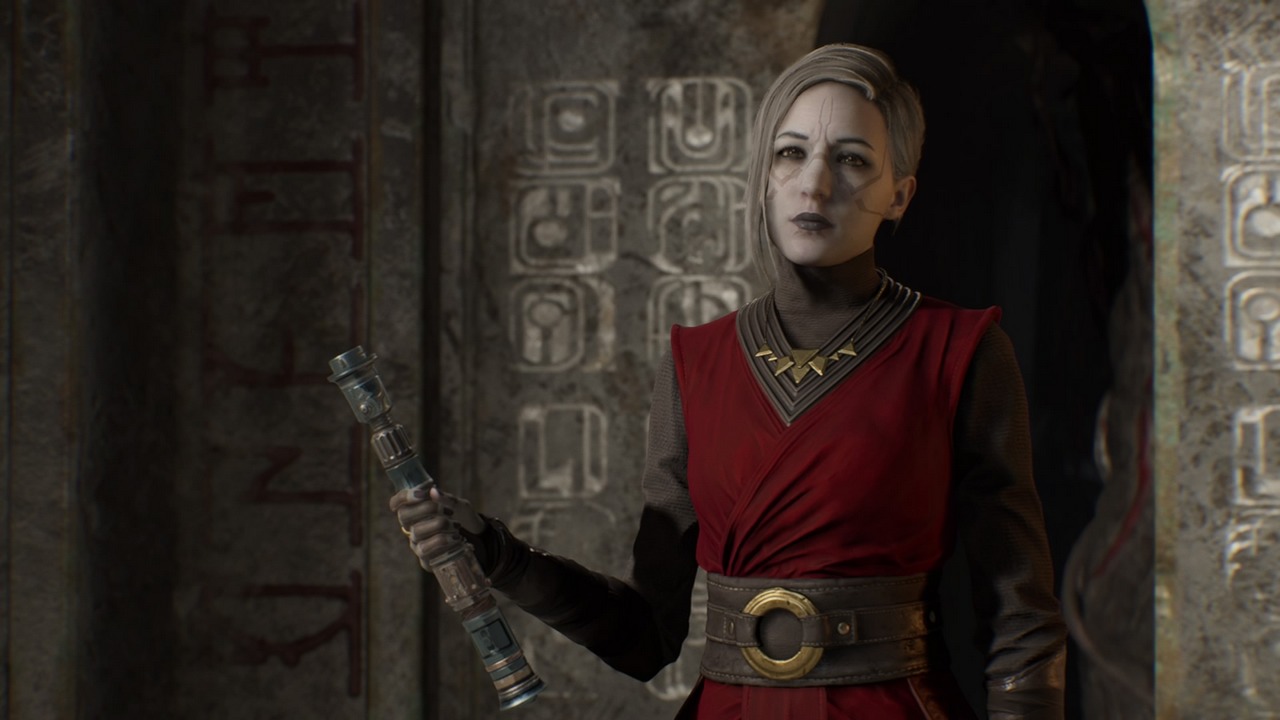 After the trio of Cal, Cere and Greez group up at the start of the game, Merrin is the final and only new crew member added during Fallen Order’s story. Out of the entire game, she’s also the most obvious sequel hook.

She’s important to the story – sort of – but her own arc ends once she boards the ship and joins the crew. As a crewmember, with an hour of story left to play, Merrin’s role is pretty much null. She has nothing else to do in the story except make the ship invisible before the final level.

It’s frustrating because she makes a great first impression, at least compared to everyone else in the cast. It’s tough not to like her and it’s disappointing there isn’t more of the game to hang out with her – which I imagine is why she joins right at the end. She helps you out, she joins the crew, it’s obvious that she’ll stick around as a core member, and then the game ends. You want to play the sequel just to hang with Merrin some more. 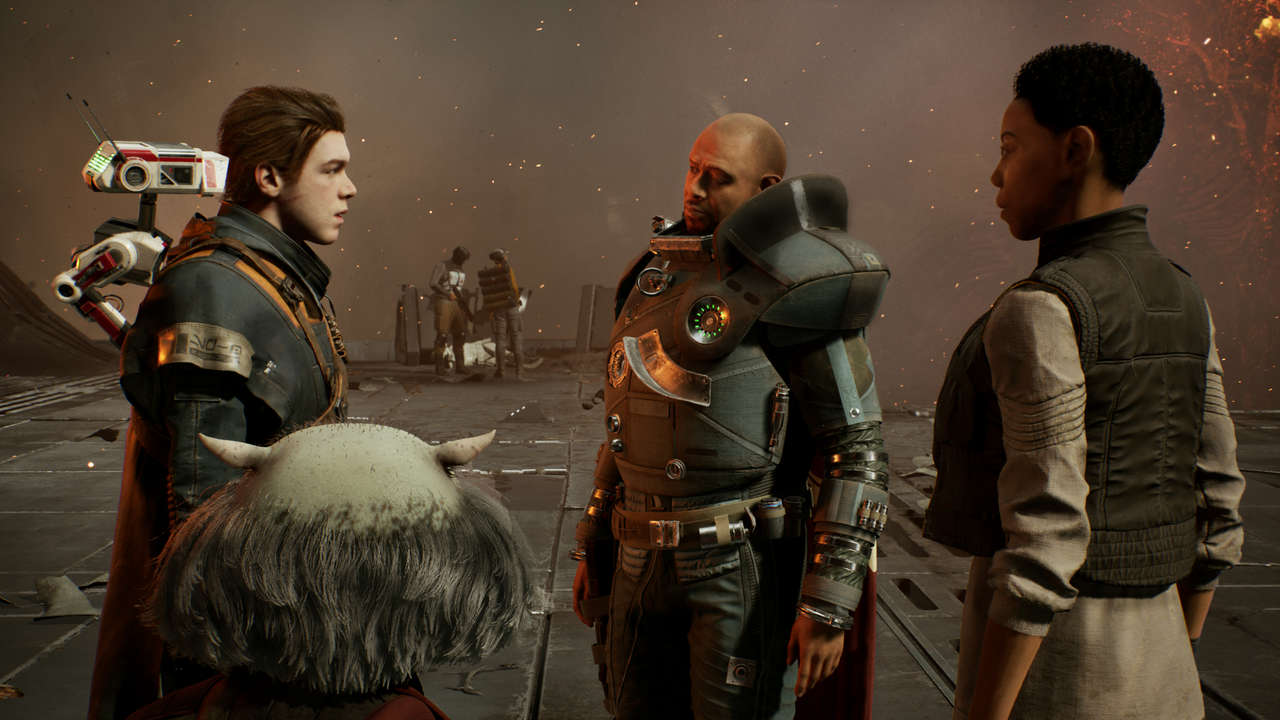 So, where to now?

While the story is full of strong moments, there isn’t much that’s actually accomplished during Fallen Order. What is accomplished feels more important to the next game instead of this one. Cal is now a full-blown Jedi Knight, Merrin has joined the crew and all four members of the crew have dealt with their baggage, bonded together and hit a positive “baseline” to kick off from next time. It even ends abruptly, with Cal destroying the holocron and asking “So, where to now?”. Roll credits.

Looking back, Fallen Order’s story feels very thin. You jump between the same five planets over 15-ish hours and the actual plot of the story is light since Cal is mostly just following breadcrumbs towards a single goal. Bonds between characters feel more rushed than they should, especially towards the end when suddenly everyone is much closer than they ever seemed to be beforehand. The thing you’ve been hunting down the entire game, the holocron – a list of Force-sensitive kids throughout the galaxy, which could kickstart a new wave of Jedi – is destroyed, leaving the game open-ended and without a core hook to start the sequel with. The journey feels unimportant because there are so few outcomes.

Fallen Order is dedicated to table setting in regards to its characters and gameplay but, somehow, there’s almost nothing to chase up on a story level. It’s a lot like a television pilot: Fallen Order lays a basic foundation to build on, to prove the formula works, and not much else. 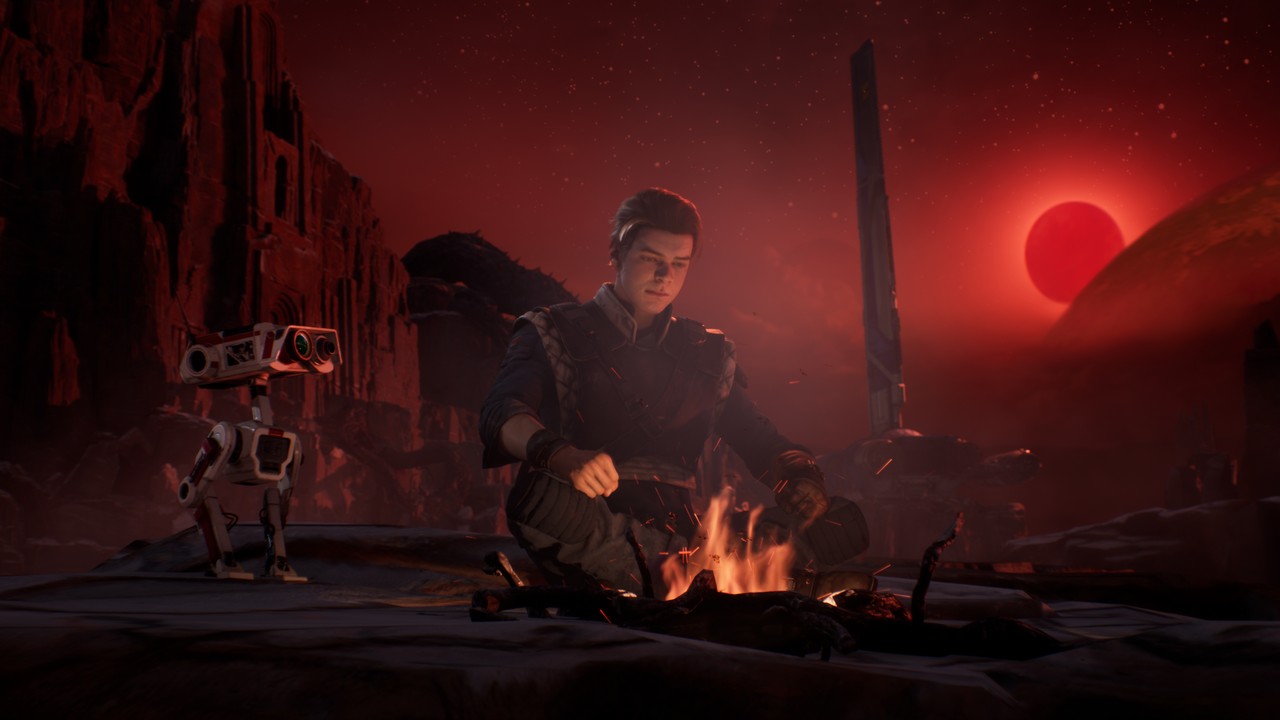 On one hand, Darth Vader’s cameo at the end of Fallen Order really nails the “scary Vader” angle. It’s a cool sequence that plays up Vader’s Force abilities like he’s some evil god-like sorcerer, tearing apart the underwater base in pursuit of Cal like Tetsuo in Akira. Even if it’s a little over the top, Vader is scary in a way that the rest of the films, including Rogue One, don’t really match.

What this appearance also does is frame Cal, Cere and the Second Sister as far, far less powerful than Vader himself. This, in turn, undermines where Fallen Order sits in context of the wider Star Wars saga. That the entire cast of Fallen Order doesn’t even measure up to Vader is exciting in its own way, but it also highlights how its story and cast measures up to the main saga ­– as in, barely.

Especially by offing Fallen Order’s main villain right after you defeat her, Vader throws the entire game into stark perspective. In a meta sort of way, Cal’s end-of-game “power level” is similar to Luke’s at the end of Empire Strikes Back, with Vader as a monster who Cal and Cere can barely escape. Also similar to Empire, this ending implies – on top of everything else – that we’ve only seen one part of a larger story. That the crew have met their next obstacle that they’re not ready for but will be later.

I could be reading further into this than I’m meant to. Vader is really more of an obstacle in Fallen Order, a force of nature, like a tornado suddenly entered the fray. He’s not important to the core story and doesn’t need to appear again. But alongside all this other sequel set-up, especially Merrin, Vader’s appearance comes off like yet another prelude. 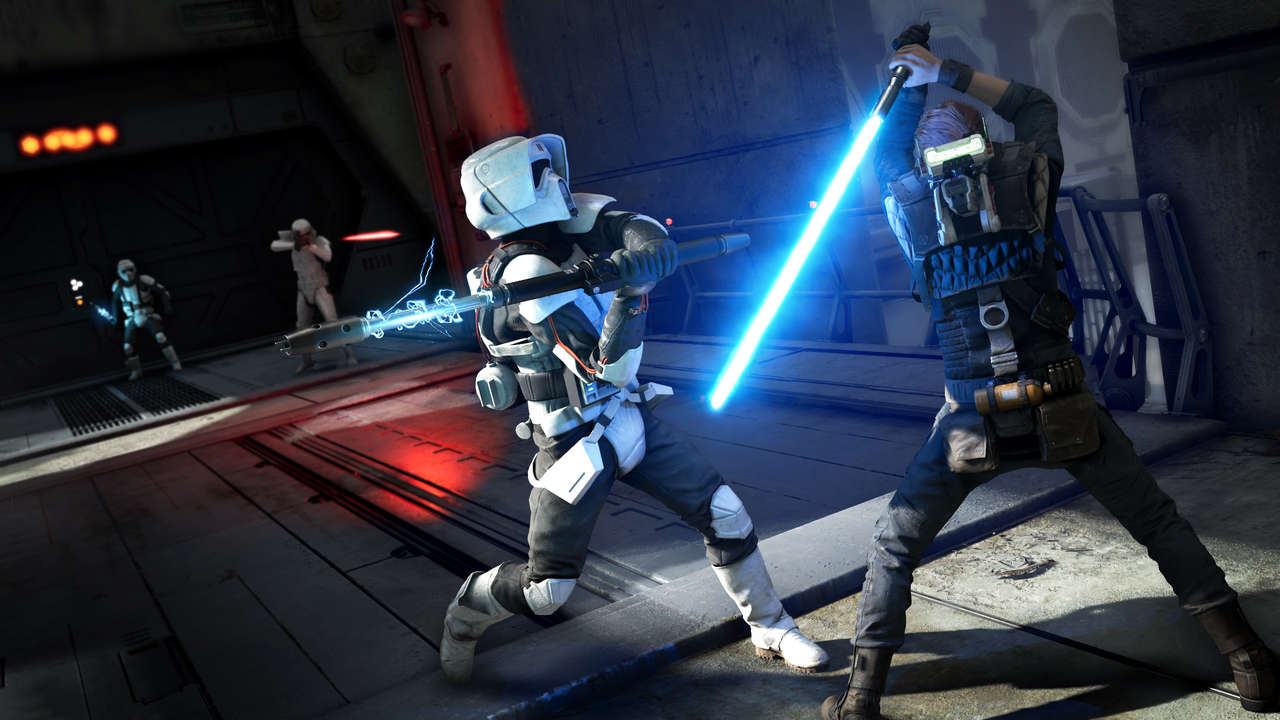 Star Wars Jedi: Fallen Order has a bad case of tunnel vision. Comparing it to the titles that directly inspired it, like Metroidvanias, FromSoft’s Souls series and Sony’s “cinematic” action games, doesn’t help either. It just highlights how short and thin Fallen Order seems, even if this isn’t really the case (a 15-hour playtime is not bad at all).

There’s just so much that obviously sets up the next game that it undermines how good Fallen Order otherwise is. It really nails the Jedi fantasy on a gameplay level — which can’t be said for many games lately — and you feel the journey from “Padawan” to “Jedi Knight” by the end of the game. The characters are endearing, well-written and matched with good-to-great performances… But it could have been a better, more fulfilling experience if Respawn focused less on the next game and more on the one it was actually making. Fallen Order ends up more like a teaser for the full-fledged sequel than a memorable title in its own right.