Speed Dating at the Apple Arcade: Round 2

Welcome to the second round of Doublejump’s first Speed Dating series, covering as many of the games as I feel like playing in Apple Arcade’s beefy catalogue during my one month trial while I’m locked up inside the house. No more pawing at the windows and dreaming of human contact for me, I’ve got a free trial to abuse!

I also really overestimated how much time I have for all these games so expect some especially concise “reviews” this time, and the next. That’s right: it’s gonna be brutal (read: very rushed).

To recap the first round, Grindstone was my winner of the smaller batch I played last time. Let’s see if Capybara’s match-puzzler will still be standing on that pedestal by this round’s end (spoiler: it won’t be).

Cricket Through The Ages by Free Lives 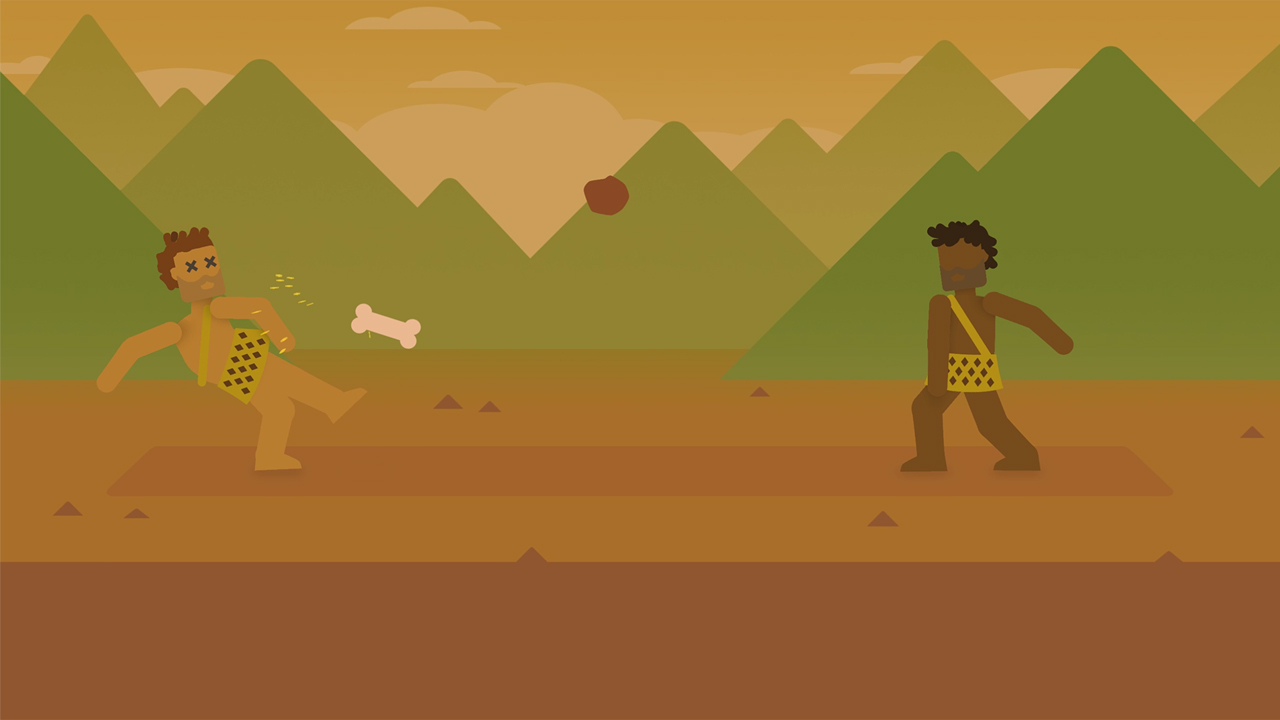 I should probably mention that I don’t like cricket at all. Every game is a tedious endurance match that lasts for hours at a time and seems like a worse version of baseball in every way, a sport I also don’t care for or know much about.

Having said that, I adored Cricket Through The Ages. It’s a slapstick comedy version of this bad sport’s definitely-true history that plays like a cricket-adjacent version of QWOP with one button. Technically it’s a multiplayer game at the heart of it, where you always compete against another “player”, human or CPU, in every stage of the five campaigns, but the CPU does a fantastic job of keeping it all absurd and breezy.

It’s dumb and funny and exactly the type of game that makes the best impression in this very-unfair tournament setup.

Don’t Bug Me! by Frosty Pop 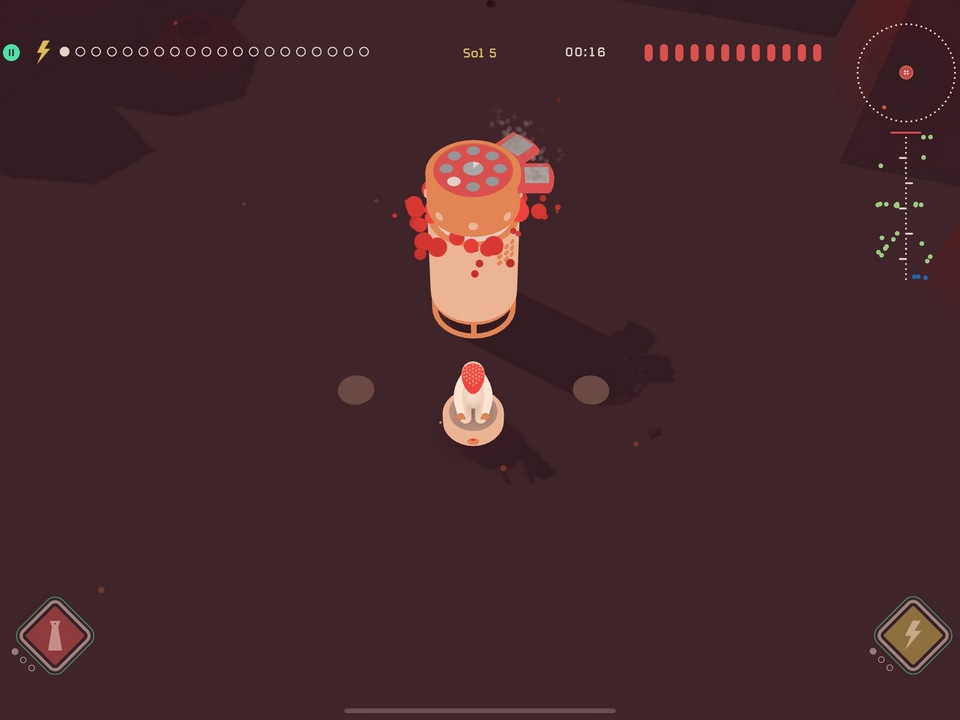 Don’t Bug Me! is a tower defence title that’s a neat throwback to Plants Vs. Zombies: it’s very streamlined and ‘small’ and based around limited tower placement with active resource generation (like Plants vs. Zombies, you are constantly collecting sunlight from your base). This time you’re a cute low-poly astronaut defending your solar-powered lunar base from all the alien bugs attacking you.

It isn’t very charming, especially when I’m comparing it directly with PvZ, but it’s fine. It’s an inoffensive timewaster – except for the clunky first-person-shooter support mechanic, the one you use when you’re low on resources and you need a little more damage to get you over the hump. I get what Frosty Pop was trying to do: it doesn’t want you relying on it so they make the mechanic altogether uncomfortable to use, but you still need to use it and it only grows more frustrating over time.

What the Golf? by Triband 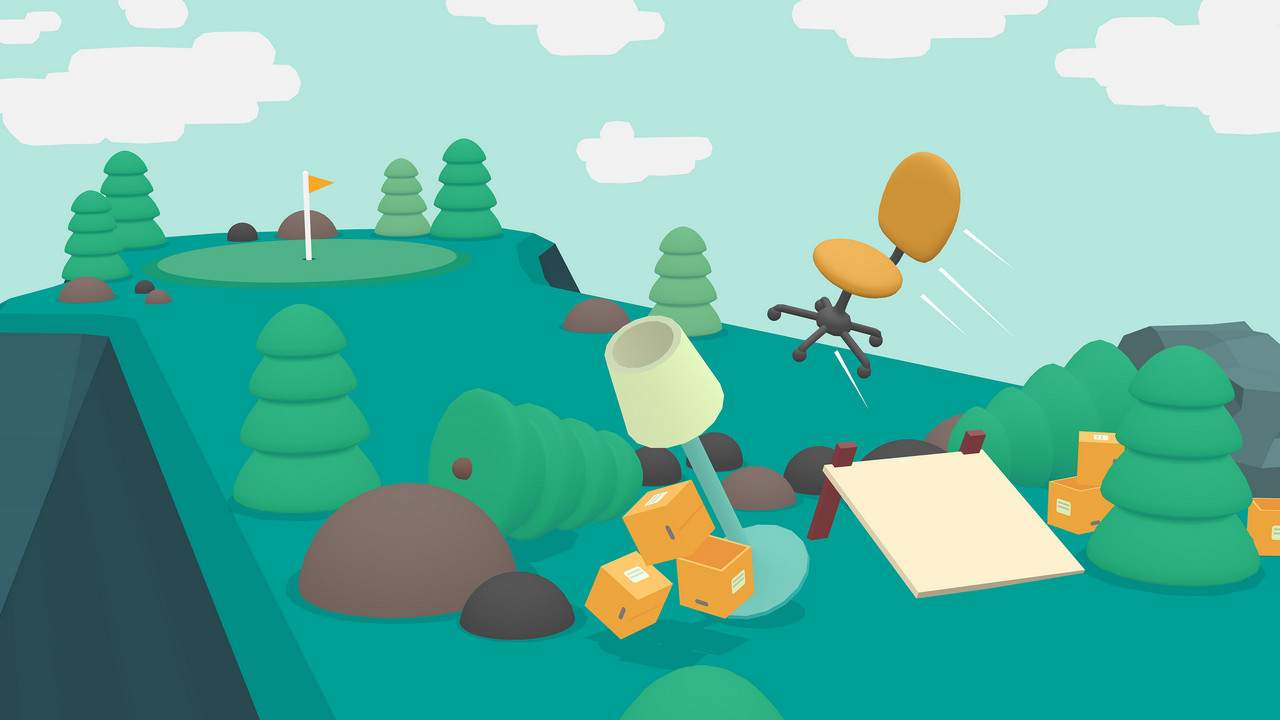 I hoped this game would scratch the same itch as Cricket Through The Ages as a silly absurdist comedy about golf. What the Golf? technically is that, but it’s also a much more robust title that ends up undermining its own comedy potential.

It started off well, where each course was a surreal round of golf where the ball is replaced by something entirely different and hitting the flag with whatever the “ball” is ends the round with a punchline. Golf a full-sized couch into the flag and across the screen in big bold type: (C)OUCH. Golf a set of football goals into another set of goals: GOALS GOALS.

Unfortunately, What the Golf? runs out of juice as a comedy very quickly. Some levels barely have any sort of joke at all and the video game parodies are more grating and annoying than fun or funny (there might not be too many of these overall but they stood out from what I played). I personally hoped it would be a succinct comedy like Donut County, but instead it’s a seemingly massive light puzzle game. That’s obviously fine, but I was personally disappointed.

Towaga: Among Shadows by Sunnyside Games 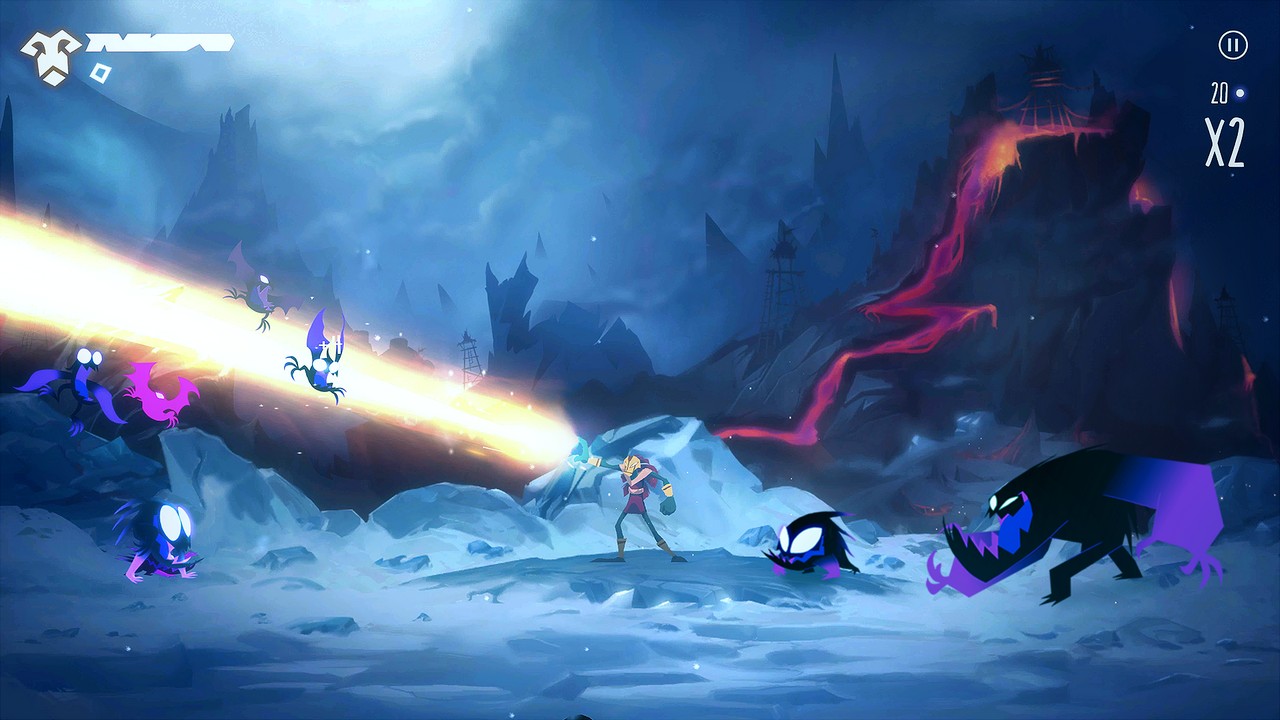 Towaga stands out as a strong all-round action-shooter.

Playing as some sort of mythical hero whose name I can’t remember, it plays as a sort of stationary twin-stick shooter. You’re either on the ground and using one stick to blast away at all the evil whatevers attacking you, or sometimes you’re in the air using both sticks to fly yourself around at the same time, like a normal twin-stick shooter. The campaign itself is well-paced and consistently spices up the gameplay throughout each ‘arc’. There are two survival modes and a harder post-game campaign. There’s even an Assist Mode, which I always appreciate – though this one could be better, since it’s essentially a difficulty toggle with a different name.

The only downside is that – unless I’m especially bad at it, which is always possible – the game ramps up in difficulty quickly and ends up being very grind-oriented early on. It wants you replaying early content or the survival modes to juice up a bit more, and the game becomes noticeably better once you have most of the upgrades. It’s also pretty menu-heavy right of the bat, like starting up a long-running gacha filled with event notifications and options; it’s not that bad but makes a clumsy first impression. Oh, and play it with a controller, too.

I’ve already played a lot of the OlliOlli games so I really didn’t like Skate City since it’s basically a worse version of both. It feels awkward to play, whether it’s on touchscreen or a controller, and skating games might be the worst genre for that sort of criticism. At least its soft morning look reminds me of Life is Strange, so that’s something.

It’s a spy-themed car-combat endless runner. It’s very straight-forward, it isn’t very interesting or inventive, and seems to just be a dependable game with a gimmick where all of its content rotates out each day. I’m pretty sure that all that information is true and accurate but I also don’t want to boot it up again to find out so take this “critique” with a grain of salt.

Either way, it’s not great or charming or anything. Blah. 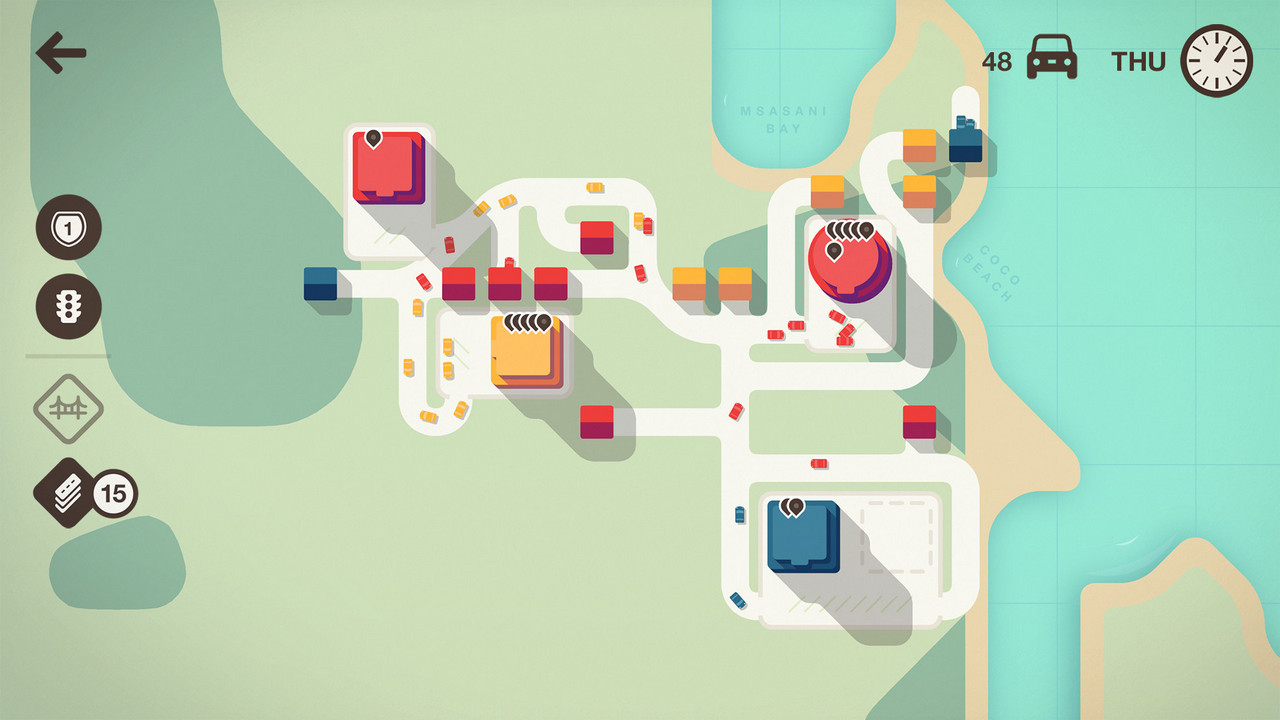 Another management game from the creator of Mini Metro, this time about road traffic. Just like their other game, I’m very terrible at it, and also like Dinosaur Polo Club’s other game, it isn’t especially intuitive. I never feel like I’m getting any better at it. It teaches you the very basics but no starting points for building good habits or how best to use certain features.

Eventually I got the hang of it and think it might actually be slightly better than Mini Metro, but still: if you’re played Mini Metro you mostly know what you’re getting, even if the core experience is technically quite different. This article does a better job of explaining absolutely all of this than I ever could so give that a read for something more thorough than “is good”.

It’s a simple but unexciting perspective puzzle game where you rotate rooms around until the floating objects align with the correct perspective. It’s very easy and it’s meant to be more of a relaxing time-waster, but it isn’t really charming or engaging enough to meet that bar.

It also has these very strange dramatic cutscenes between most levels, like watching a one-person play as a mute slideshow. They’re meant to highlight which items are missing from the room before you start the level but they’re odd enough to stand out.

Assemble With Care by ustwo games 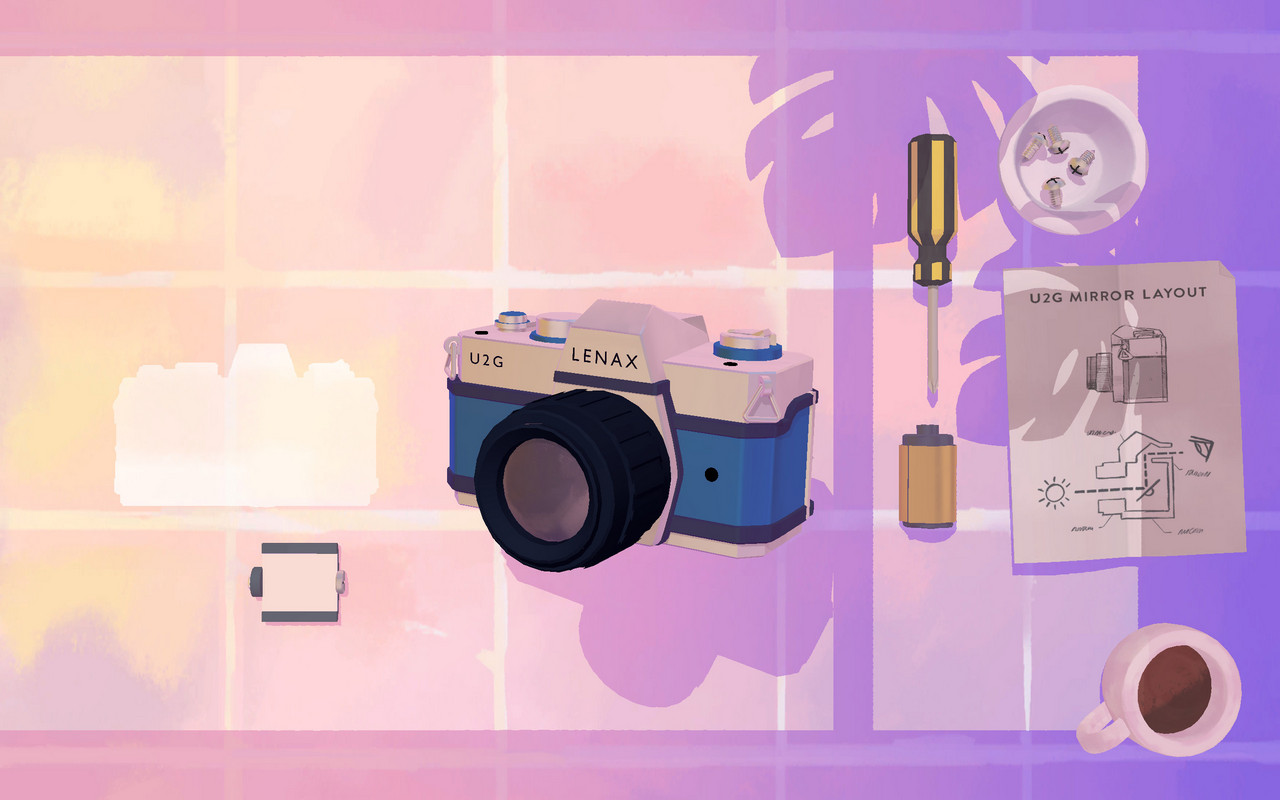 Assemble With Care is a quaint narrative-puzzle game about fixing old and retro tech, like a projector, a phone and a watch. The puzzles themselves aren’t especially hard, playing out like the puzzles in The Room series, but with a much larger focus on the overarching story tying it all together. If anything, the puzzles are just an excuse for the story with its calm storybook atmosphere and endearing, colourful voice performances.

Personally, it felt like it wanted to be more affecting than it actually is and would go over better with people who don’t play too many games. Not to say there are many games like Assemble With Care; it just isn’t very memorable. It’s a lazy weekend stroll of a game, something that you enjoy for its relaxed tone and atmosphere more than its gameplay or story. It’s short and sweet if you’re in the mood for it, but doesn’t reach much beyond that.

An almost excessively produced game about mixing watercolour paints. It actually feels very similar to Assemble With Care but without the story part: a very indulgent and lavishly produced atmosphere surrounding a very basic puzzle game. It doesn’t necessarily get in the way of the core gameplay, but it doesn’t help it much either.

Eventually I got slightly stuck and quit because I really need to run through these games faster than I have been.

That’s fifteen games in with about a week left of precious Apple Arcade free trial. I also have 25 games installed that I still need to play, and because I’m an idiot, most of them are story-centric, too…

This round of Speed Dating saw Cricket Through The Ages rise way up the ladder and soar past everything else with its dumb cricket silliness, and Towaga: Among Shadows right behind it as an actual video game that I’ll probably buy for my Switch.

Next time in the Apple Arcade: even more games given even less of a chance. Stay tuned.

Round 2 Winner: Cricket Through The Ages

1. Cricket Through The Ages