Space Invaders is a series that’s synonymous with video gaming, and original developer Taito has brought it back into the limelight with Space Invaders Forever, a compilation that brings three of the series’ less “traditional” releases — Space Invaders Extreme, Space Invaders Gigamax 4 SE and Arkanoid vs. Space Invaders — to modern home consoles with mixed success.

The bundle itself is more than worth experiencing if only for Space Invaders Extreme and Space Invaders Gigamax 4 SE alone; the former, a high-octane take on the Space Invaders formula, is an absolute joy to play, and the latter is a fantastic multiplayer version of the arcade classic. Unfortunately, Arkanoid vs. Space Invaders fails to stand up alongside its contemporaries, owing largely to an uncomfortable control scheme. 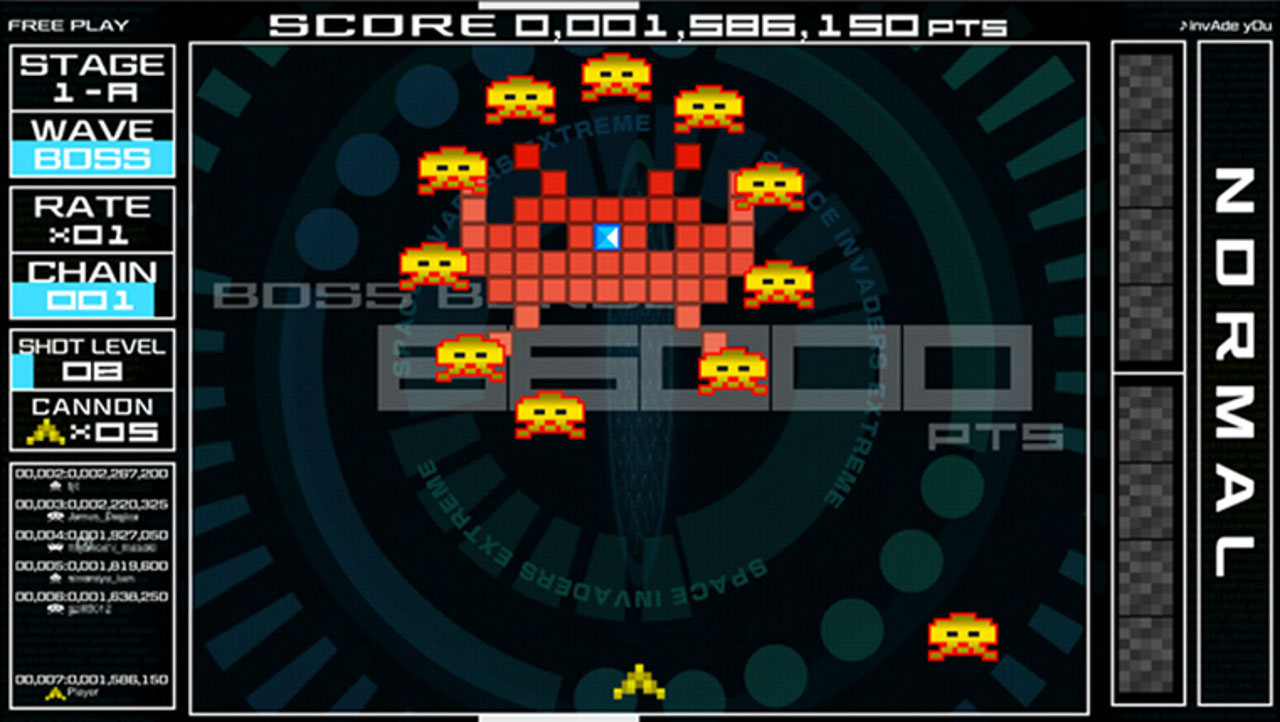 Easily the highlight of the package, Space Invaders Extreme is marvellous. Taking the bare-bones nature of the original Space Invaders and adding a healthy dose of modern flair and over-the-top aesthetics makes this game a hit, even for someone who has little experience with the series’ arcade origins. Originally released in 2008, the version included in Space Invaders Forever is based on the revamped Steam release from 2018, with improved visual and sound effects as well as some minor gameplay alterations. It works extremely well on the Switch, whether playing in handheld or docked mode.

Space Invaders Extreme’s core gameplay loop involves defeating waves of alien invaders all while going for the highest score possible. The levels are all quite short, which both complements the Switch’s portable nature and also makes it easy enough to replay them multiple times to shoot for high scores; unfortunately, there’s only a handful of stages to play through, so if you’re not overly interested in chasing a high score there really isn’t too much on offer.

Where Space Invaders Extreme really shines, however, is in its aesthetics. Your shots sync with the music, everything flashes constantly, and the announcer is almost constantly shouting. It’s simply a joy to see in action. The absolutely stellar soundtrack means that it’s a joy to listen to as well, especially given that everything syncs up so well with the music. It can be a slightly disorienting experience at times, but the short stage length and relatively simple gameplay helped keep things from becoming too confusing. 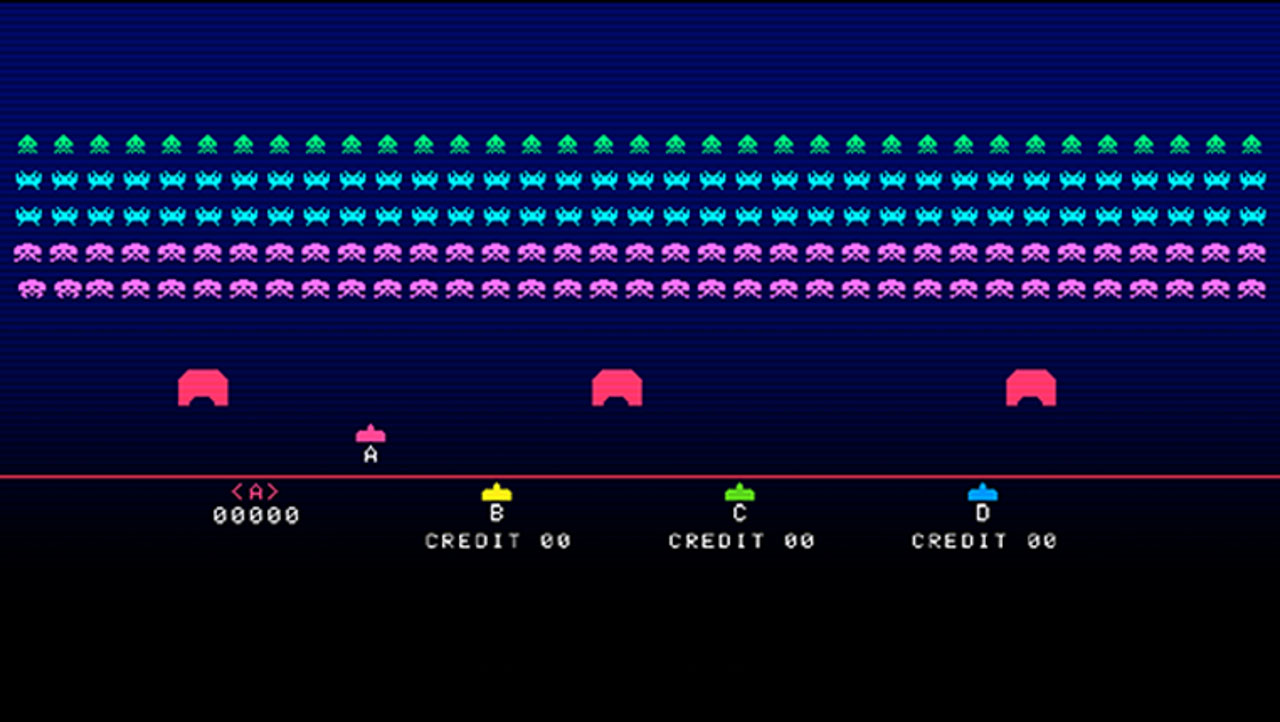 With a group, Space Invaders Gigamax 4 SE is a figurative and literal blast. The chaotic action keeps things fresh even after beating the game, and the short length means it’s easy for a group to replay it and go for shorter clear times and higher scores. Each individual player’s scores are also shown at the end of the game, adding a competitive edge to the cooperative action.

Unfortunately, this does mean the game is lacking for the lone player. With only three stages, all designed with four players in mind, there isn’t much to do if you’re on your own: it’s borderline impossible to defeat the massive number of enemies each stage throws at you alone; and the ability to power up your shots during boss fights requires at least two players — the game doesn’t make any allowances for the fact that you’re playing solo. It makes solo victories an almighty achievement, but it also makes them frustratingly difficult and leaves you almost unable to experience a third of the Space Invaders Forever package when you’re on your own. 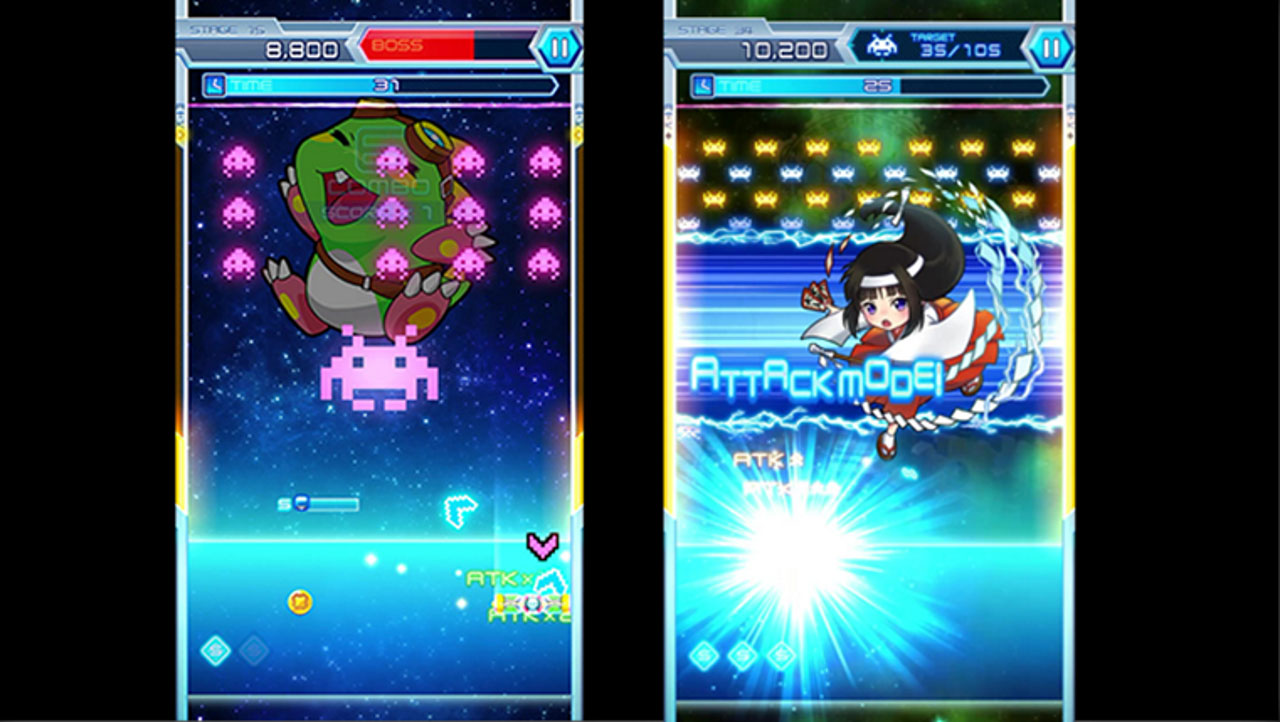 Unfortunately, when it comes to Arkanoid vs. Space Invaders, the collection falters. The game itself is fundamentally sound: the marriage between the Breakout-style gameplay of Arkanoid with the shoot-‘em-up elements of Space Invaders works extremely well, and with plenty of bite-sized levels and unique abilities tied to different characters, there’s more than enough content to be found.

The main issue with Arkanoid vs. Space Invaders is the fact that it’s a direct port of the mobile version of the game, and it’s simply not fun to control on the Switch: it doesn’t offer any controller support at all, so you’ll have to use the touch screen to move your ship. It also forces you to play in a portrait orientation like on a smartphone, holding your Switch at an unnatural angle that’s made even more uncomfortable by the fact that the Switch is much bigger and heavier than a smartphone.

On top of those logistic issues, Arkanoid vs. Space Invaders also crashed a few times, so I can’t help but feel like this particular port was rushed. It’s a shame, too, because there’s a solid game underneath all of these issues — the Switch just isn’t the right platform for it.