Smash Hockey review — PvP Robo-Battles Have Never Been so Boring

The mobile gaming landscape is a vast one, filled with simple mobile games, puzzlers, ad-filled glorified flash games and even bigger-budget titles ported to the smaller screens (I’m looking at you, Fortnite). Inundated with choice and variety, it can be difficult to find one single game that fulfills all of your mobile gaming needs. Suppose, then, that you’re looking for a thin, casual time-waster of a game that you can easily play on the go — you might not think that something like that would feature a bunch of robots hitting bombs at each other for supremacy… But it does.

Smash Hockey is a PvP “one-handed battler” from developer I From Japan that marks publisher Phoenixx Inc.’s debut on the mobile market. Contrary to the name, there’s not much “hockey” about this game at all. You play as one of eight different robots and face off against other players in a seven-lane one-on-one showdown, aiming to use your attacks, special moves and giant hammer “SMASH” to knock one of the two bombs on the field into your foe. You can play the game casually, just for fun, or you can try to climb the ranks and unlock new skins for your robots… And that’s about it. 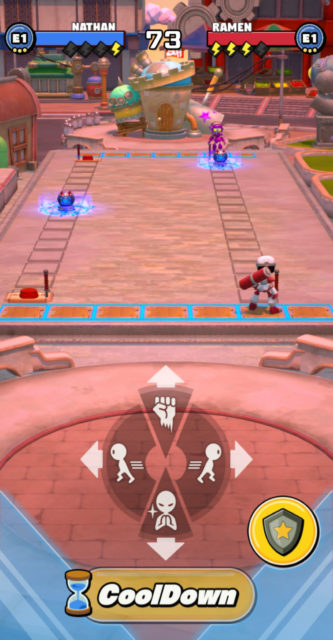 Right off the bat, Smash Hockey looks good, with fun, bright colours and a cartoon-ish aesthetic making it accessible and enjoyable for players of all ages. Each character has a unique look and feel, and there are plenty of customisation options to suit your play style (and fashion sense). If you feel like using invisibility to confuse your opposition, then Shinobi is right up your alley. Alternatively, if you feel like the best defence is a good offence, you can pick Canon and fire rockets down three lanes at a time. Each of these characters has multiple skins, as well as customisable hammers, eye colours, shield images and more, all unlocked using the battle coins that you win through gameplay. Yes, there are in-app purchases, ranging from AU$1.59 to a whopping AU$79.99, but — as is par for the course in the world of mobile gaming — those are purely cosmetic and have no impact on gameplay. Please, don’t feel the need to drop your cash on these.

Smash Hockey does succeed in being a “one-handed battler” as far as its gameplay is concerned. You can access all of the game’s controls with your thumb alone: swipe up to attack, left and right to move lanes or downward to use your special move, and you can press the two big buttons on the screen to use your shield or your SMASH move. Although it is initially fun and engaging, it soon falls into a repetitive, uninteresting, unchallenging pit. I won most of my matches within the first 20 seconds, and I don’t think it’s because the gaming gods have gifted me with amazing skills (even though they totally have). At the time of writing, the Google Play Store is reporting more than 100 downloads in Australia and New Zealand — where it’s being soft-launched before its worldwide release — and yet I don’t believe I ever played against a real person. Stomping the AI gets boring after three rounds, and I highly doubt that’ll change. If you’ve played one round, you’ve played ten hours; there’s no variation and no real challenge to be found by playing more. Aside from adding some more variety to it, there are a few tweaks that I From Japan really needs to make to Smash Hockey if it wants the game to be a success: firstly, and most importantly, the game’s servers are currently not allowing people to actually log in, which is an obvious issue. Once you’ve managed to log in, you’ll find that the bombs are currently situated in the first and sixth lanes, rendering the seventh lane completely pointless and often unused, and that I From Japan desperately needs to make vibrations optional. At the moment, your phone vibrates whenever your SMASH move is ready or you’ve won a match, and there’s no way to change that. It might be a personal thing, but I really don’t need a vibration to tell me something I can see very clearly on the screen, and the option to turn vibrations off is a staple in mobile apps, let alone games. On top of that, there are a couple of bugs that I From Japan would be well-served to squash quickly: the game doesn’t remember which characters and hammer skins you had equipped before you closed it, forcing you to reapply them every time you load it up; and — perhaps far more annoyingly — some of the cosmetic items that you’re paying for (either in real money, or in the time it takes to earn enough coins for them) simply don’t change the way your character looks at all, which is a bit of a waste of money.

Of course, Smash Hockey is a brand-new release for which Phoenixx Inc. is using Australia and New Zealand as a testing ground before publishing it worldwide, so teething issues are to be expected. For now, though, unless you’re looking for a game that fits Smash Hockey’s exact description, there are far better games to download onto your device to scratch your on-the-go competitive itch.

While the first few rounds of Smash Hockey are fun and engaging, the game has no staying power, no replayability, and no real depth. It’ll definitely scratch your itch if you’re looking to mindlessly kill 20 minutes or so, but it’s not worth the time it’ll take you to download it if you’re looking for even a slightly deeper experience.