Six Days in Fallujah: Celebrating Violence or Condemning it?

It’s in the eye of the beholder

Six Days in Fallujah’s re-announcement this past February came as a shock to pretty much everyone. It’s one of the most controversial shooters in recent memory, and I feel pretty confident in saying that nobody would have thought it was coming back after original developer Atomic Games went bankrupt in 2011… yet here we are, a decade later, with a new trailer from a new team taking another chance on a game based on one of the most brutal military engagements in recent history.

With that trailer now out in the wild, and Highwire Games’ commitment to finishing and releasing the game, I can’t help but wonder if the studio is going to be able to develop a game based on a real-world conflict without glorifying or justifying the violence and bloodshed that occurred during the Second Battle of Fallujah. Before I explore that nagging question, I thought it’d be important to go back and look at the game’s original announcement and the events the game is based on. So, let’s jump in our time machines, travel 12 years into gaming’s storied past and take a deep dive into Six Days In Fallujah… Damn that makes me feel old. 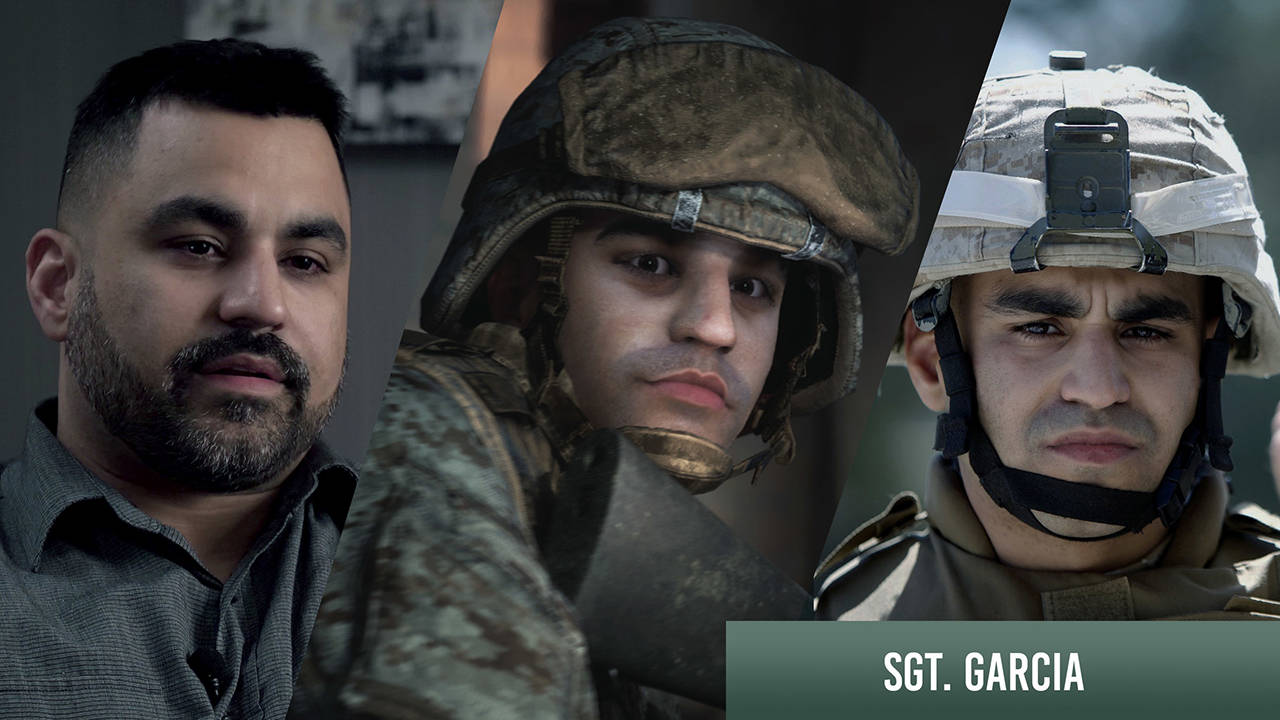 It was back in 2009 that Atomic Games announced Six Days In Fallujah, a tactical shooter based on the Second Battle of Fallujah that took place between November and December 2004. Arguably the most horrific of the Iraq War’s many conflicts, the Second Battle of Fallujah was a joint operation between the American, Iraqi and United Kingdom governments that saw the coalition attempting to occupy the city of Fallujah and eliminate a rapidly growing insurgent presence. Anticipating the attack, however, the insurgents had booby-trapped much of the city’s infrastructure – including homes and schools – with explosives and weapon emplacements. The ensuing battle resulted in more than 2,000 deaths; heartbreakingly, the Red Cross estimated that 800 of those casualties were civilians.

Atomic Games founder and president Peter Tamte told Variety that the idea to turn the Second Battle of Fallujah into a video game came from Eddie Garcia, “a Marine sergeant who had been med-evaced out of Fallujah during the battle” and had previously worked with Tamte on training software for the U.S. Marine Corps. According to Tamte, Garcia had told him stories from the warzone and then asked if Atomic Games would be able to create a game to tell his stories. Tamte’s rationale for taking the challenge on was that “ultimately, all of us are curious about what it would really be like to be in a war.”

“I’ve been playing military shooters for ages,” Tamte said in an interview with GamePro, “and at a certain point when I’m playing the game, I know it’s fake. You can tell a bunch of guys sat in a room and designed it. That’s always bothered me.” 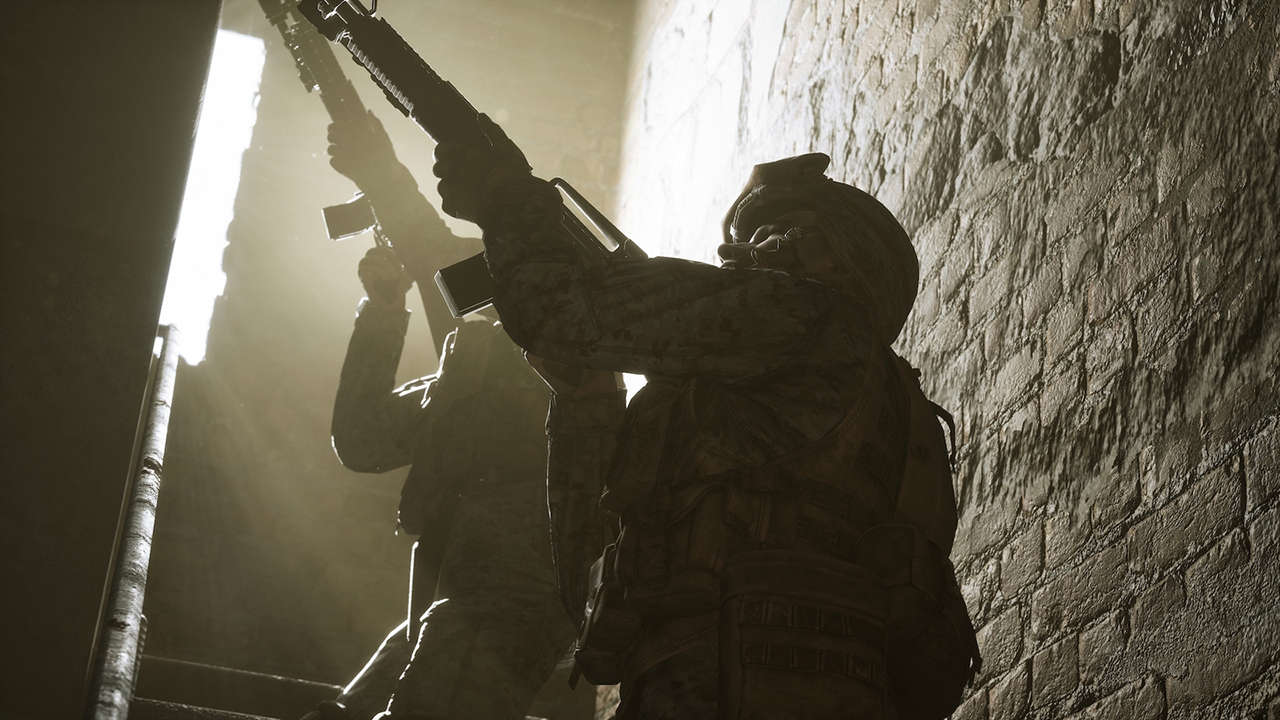 Atomic Games claimed that it had interviewed up to 47 people from all sides of the conflict, including U.S. military, insurgents and civilians. Using those accounts and countless hours of research, the studio claimed that it would create the closest and most accurate depiction of the events so as to tell the stories of the people involved. After it was announced, however, Six Days in Fallujah came under intense criticism, with many claiming that Atomic Games was being insensitive in making a game based on events that were still pretty fresh in the public memory. This criticism prompted publisher Konami to pull its support, which led to the game’s cancellation and, ultimately, Atomic Games’ closure. This all happened at a time when modern military shooters like Call of Duty dominated the market, and that particular representation of modern conflict wasn’t exactly subtle in its rock-infused “yee-haw” depiction of American patriotism; the difference is that those representations were entirely fictional, while Six Days in Fallujah was based in reality.

Twelve years after Six Days In Fallujah’s original announcement and 17 years after the conflict it’s based upon, the world’s a very different place. Political discourse has become increasingly more hostile thanks to social media, COVID-19 has caused untold damage to people’s lives and the global economy, and we’ve even seen two console generations come and go. In the midst of all this, in a climate where social justice, inclusivity and political correctness are all at the forefront of the collective consciousness, Highwire Games has gone ahead and announced its intention to revive the single most controversial shooter of the last two decades. I’ve got to say… That’s the definition of ballsy.

It’s no surprise that in the current hotbed of political divisiveness, the revival of Six Days in Fallujah has stirred up more controversy, with talking points both old and new. It’s quite strange to me that a developer – let alone one that isn’t particularly established – would even attempt to make a game like this knowing what the consequences could be, and yet I find myself increasingly curious. Admittedly, what we’ve seen of Six Days In Fallujah is rough; it’s quite obvious pre-alpha, and still some of the ideas on display, such as the inclusion of procedurally-generated maps, are quite intriguing and (dare I say it) “artistically motivated”. I’ve seen people criticize the procedural-generation idea, but I think it’s an inspired attempt at recreating the uncertainty and tension that clearing buildings would have caused. 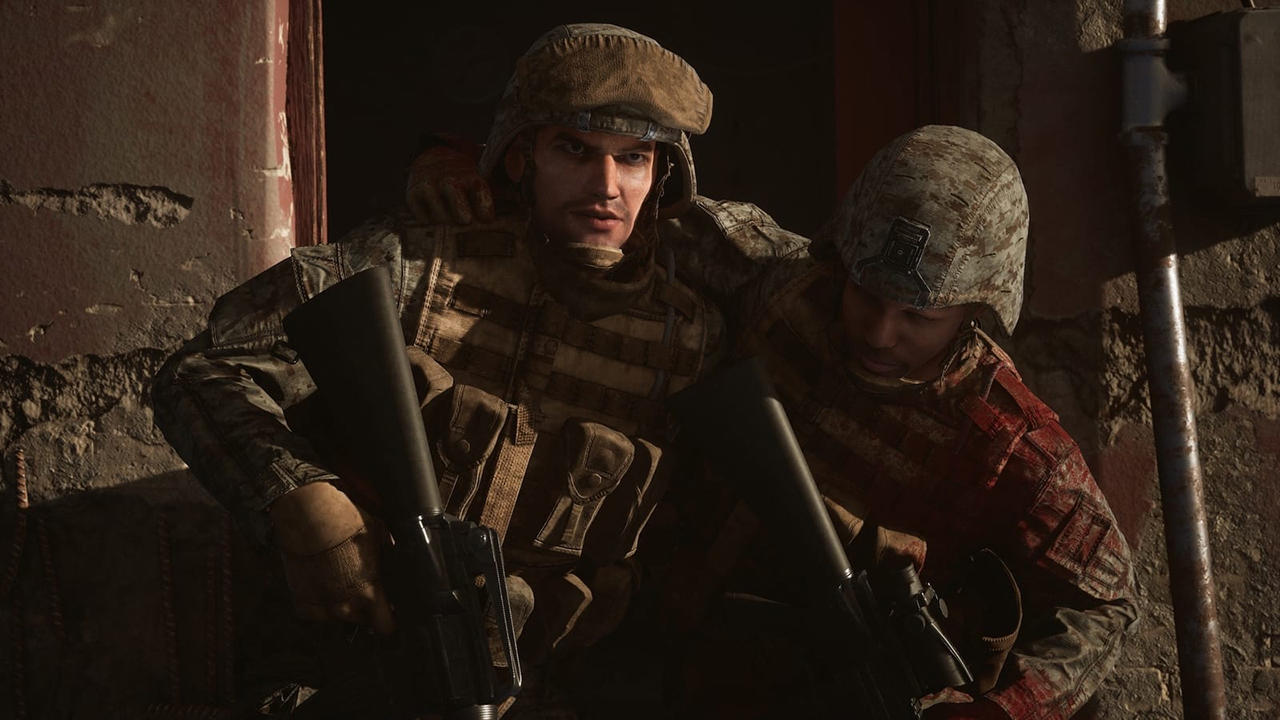 Overall, though, the brief glimpse at gameplay shown reminded me of Call of Duty: Modern Warfare (2019)’s Clear House mission, as well as a sequence later on in a hospital full of injured enemies. Those were two of the most interesting and thematically confronting representations of modern war in video games, all done through gameplay and context.

The Council on American-Islamic Relations (CAIR) has also weighed in on this issue, demanding that Microsoft, Sony and Valve not allow Six Days in Fallujah to be sold on their respective storefronts. Calling the game an “Arab murder simulator that will only normalise violence against Muslims in America and around the world,” the Council outlined just how damaging the Second Battle of Fallujah was, even citing a study published in the Environmental Pollution journal which found that children and infants born in the area are still suffering from health issues caused by the fallout. This has spawned countless calls to have the game deplatformed, with many outlets drawing attention to the admittedly problematic prospect of immortalising such a horrific event into an entertainment product. 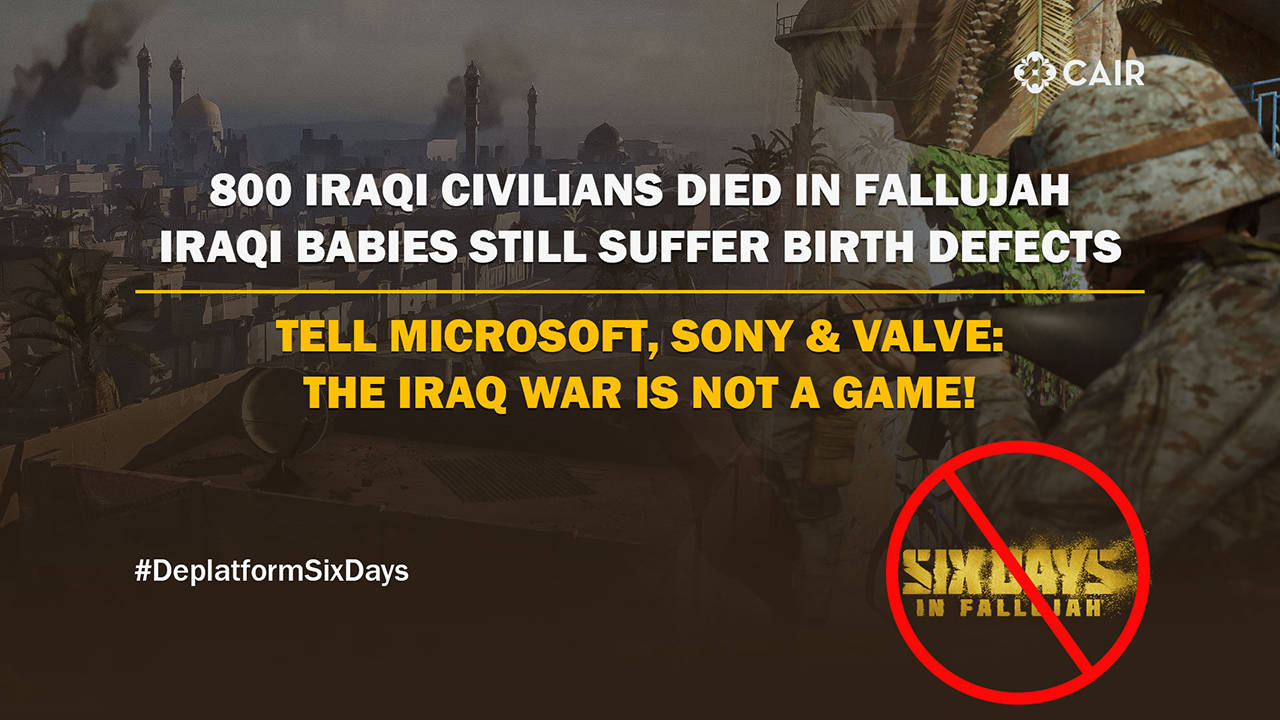 This brings us back to the overarching question: whether Six Days in Fallujah means to celebrate or condemn the violence that occurred in the Second Battle of Fallujah.

The thing that both Atomic Games and now Highwire Games have aimed to achieve with Six Days in Fallujah — simulating the literal horrors of war and telling the stories of those involved — is something that our medium has really only flirted with in the past: Call of Duty: Modern Warfare looked like it wanted to but wouldn’t (or couldn’t) commit all the way, and while Spec Ops: The Line did succeed in exploring the “superhero fallacy” and displaying some of the horrors soldiers and civilians face during wartime, it was a pretty average-feeling third-person cover shooter that felt more “fantastical” than Six Days in Fallujah. Highwire Games, on the other hand, seems intent on using gameplay mechanics and the medium’s baked-in interactivity to tell its stories and explore its themes, something that only video games are really capable of. Unfortunately, this is something that many of the bigger developers are moving further away from in their misguided pursuit of artistic legitimacy.

Although I disagree that a game like this is going to vilify Islam and encourage violence against those of Middle Eastern ethnicities and the Islamic faith primarily because I believe — or, at least, hope — that people are a bit smarter than the discourse around it has given them credit for, that doesn’t mean that Six Days in Fallujah is entirely free from criticism. Tackling such a sensitive topic is always going to invite discussion from all sides, which is something I believe Highwire Games is acutely aware of because, really… What’s the point otherwise? Of course, if the game comes out and ends up being your typical celebration of jingoistic American war stories, then Highwire should be prepared for severe, extremely justified backlash, but there’s something to be said for giving it the benefit of the doubt until we see the finished product. 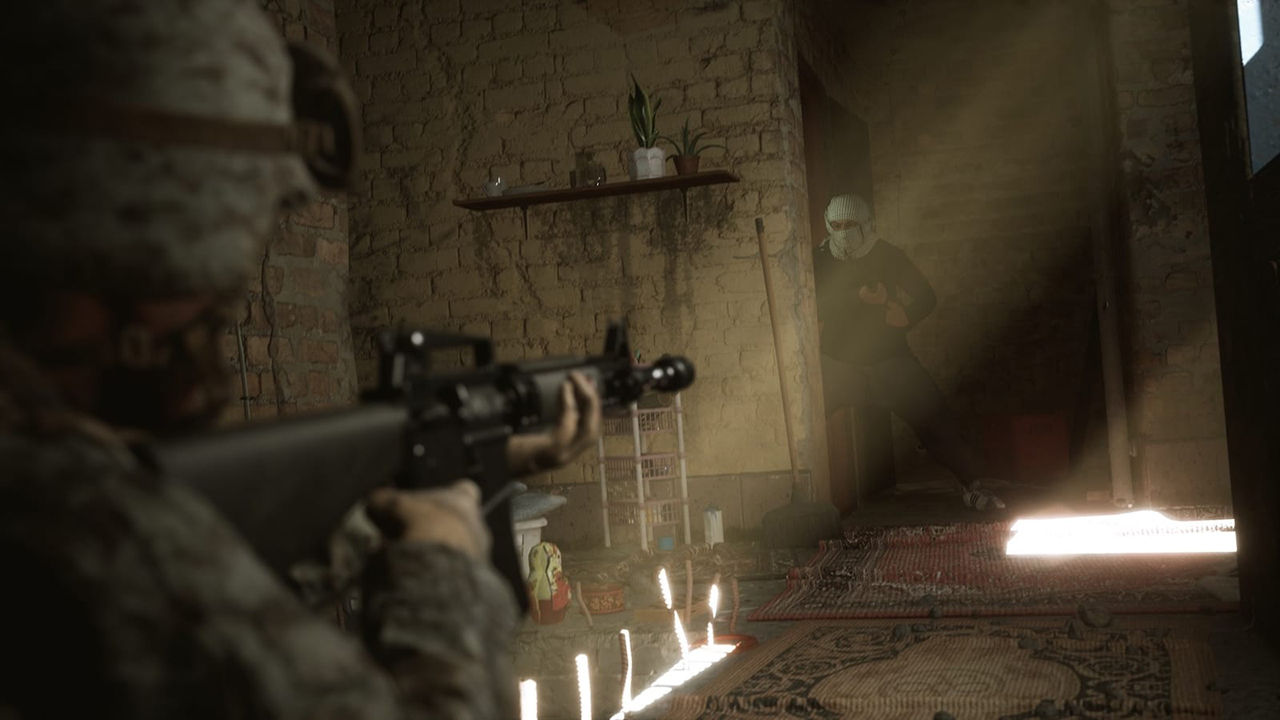 At the end of the day, the way any media’s message gets interpreted relies heavily (if not solely) on the way it’s presented, and Highwire won itself no favours by using civilian NPCs as the stinger on Six Days in Fallujah’s (re)announcement trailer. It’s important to remember that once your product or artwork enters the public domain, your intentions as a creator drift into the background as your audience’s reading of any given concept isn’t going to line up with your message, nor can you really trust those intentions to begin with. What we’ve seen of Six Days In Fallujah so far doesn’t look groundbreaking — the use of procedural generation is inspired from a gameplay perspective, but not so much from a narrative perspective — but if Highwire Games wants to prove that it’s really “representing everyone”, it needs to show some more Iraqi perspectives… or at the very least explain how it intends to represent everyone.

People are still suffering the consequences of that Second Battle of Fallujah today: families were torn apart, lives were lost, homes were destroyed, combatants on both sides came out severely wounded, both physically and mentally, and babies are still being born with birth defects as a result of the United States’ use of depleted uranium and white phosphorous. Six Days in Fallujah is confronting because war is neither fun nor entertaining, and we can only hope that Highwire Games pays the appropriate respect to that fact in finishing this controversial game. Until we can see that that’s the case, though, we’re left to discuss the ethics of creating media about a real-world war in an entertainment landscape that’s ostensibly dominated by violence.