The Legend of Zelda: Skyward Sword HD Review — The Exact Opposite of Breath of the Wild in the Best Way Possible

In many ways, The Legend of Zelda: Skyward Sword’s reputation precedes itself. Launching late in the Wii’s lifespan earned it a reputation for gimmicky motion controls, while its linearity became a controversy in itself given the series’ usual indulgence in exploration. At a glance, Skyward Sword seems like the exact opposite of 2017’s Breath of the Wild.

Now, a decade since its original release and with a new HD remaster out on the market, it’s time to see whether those critiques hold up and whether Skyward Sword HD makes any real effort to assuage the complaints. 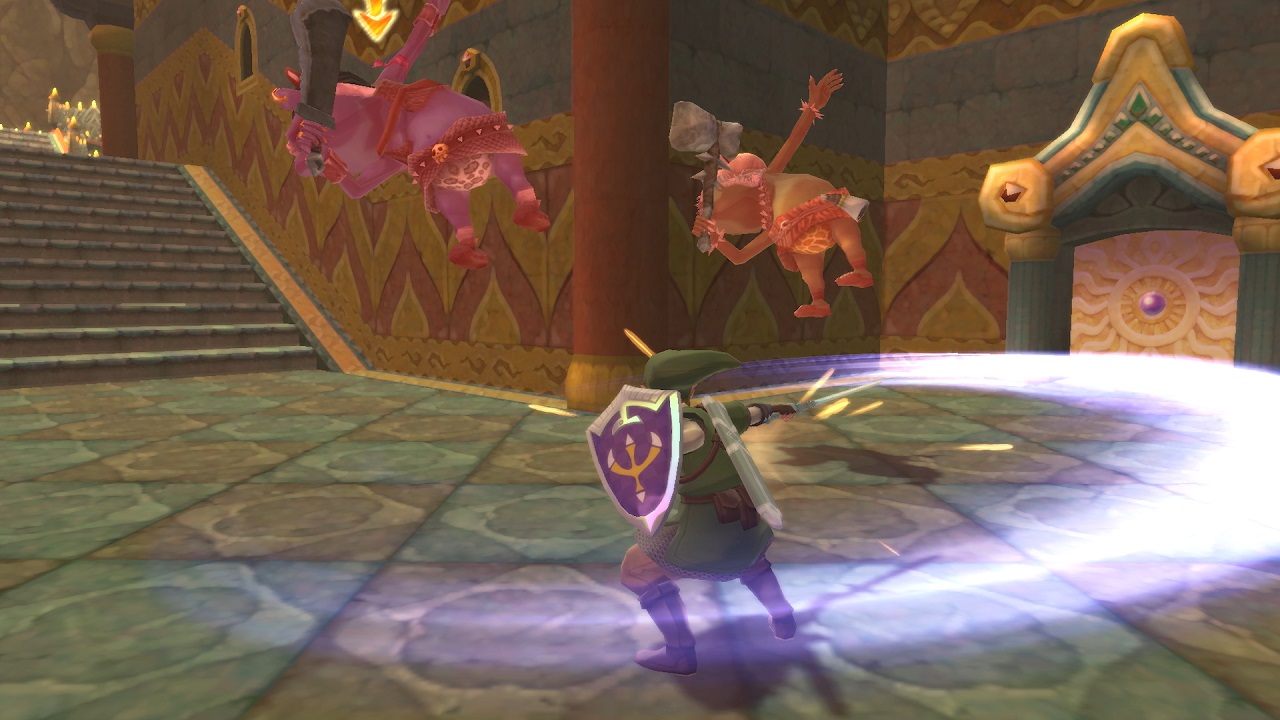 While it’s true that Skyward Sword is more linear, that’s by no means a negative. Skyward Sword’s overworld areas are cleverly designed so that you end up overlapping previous ground in a criss-cross manner. This lends areas a greater sense of authenticity, feeling more like natural places than just some place in a video game. In many ways, it’s a considerable improvement over previous instalments.

An apt comparison would be the series’ traditional dungeon design. While things might be more straightforward, the locales excel in offering densely designed progression with a side of light exploration.

Talking about dungeons, Skyward Sword’s dungeons are amongst its greatest strengths. I’d even go as far to say that the dungeons are some of the sharpest and most effective the series has to offer. They may not be as numerous or long as those in previous instalments, but Skyward Sword’s dungeons boast some of the smartest and most holistic puzzle design displayed throughout the franchise’s 35 years.

The late game Sandship’s overarching theme is an excellent example of this. The ruined ship is inside a giant desert and in disrepair, but by striking a “timeshift” stone upon the ship’s mast, the ship transforms into its ancient, seafaring self. Not only does this force you to consider the entire dungeon as a physical whole when solving puzzles, it builds upon the recurring use of the timeshift stones, a puzzle element you’ve been learning to use since the early parts of the game.

It’s these moments that highlight Skyward Sword’s more linear design at its best. The game can assume previous knowledge from the player that it uses this to up the ante as Link’s journey continues. 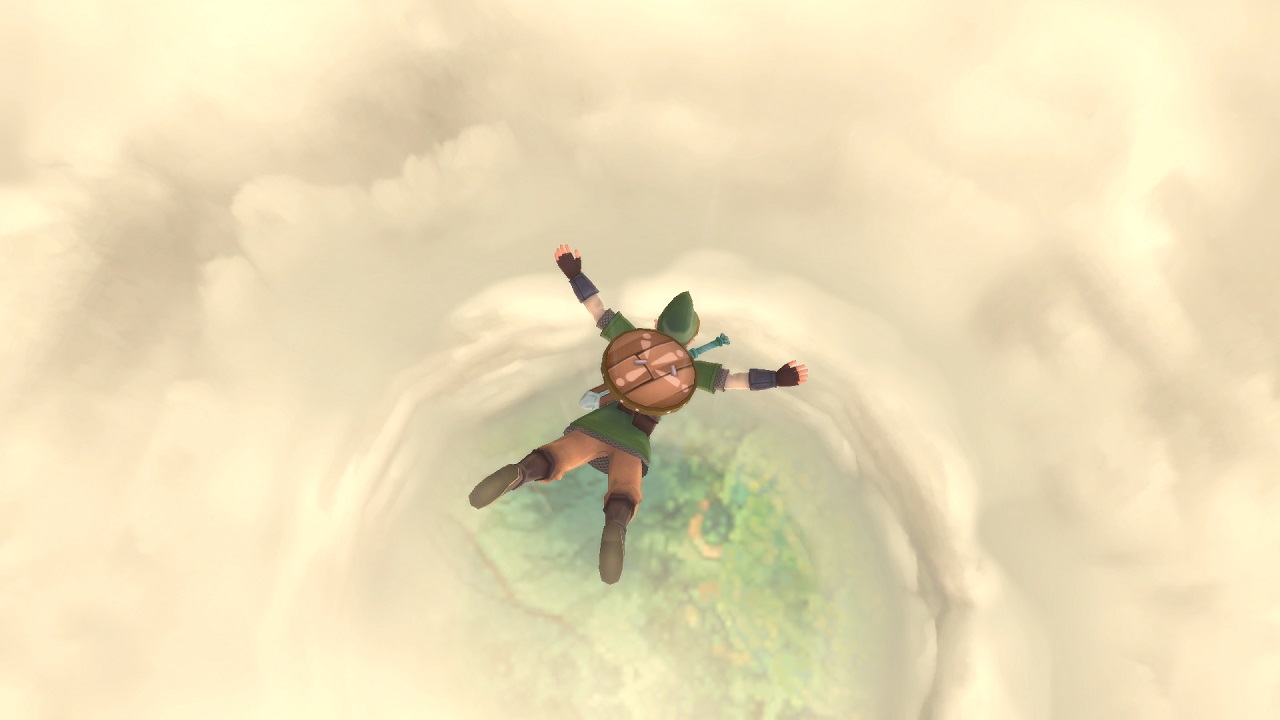 Perhaps the largest benefactor from its linear design is the game’s narrative. It might not be as grand as Twilight Princess or as iconic as Ocarina of Time, but Skyward Sword is often touted as having the strongest narrative of any Zelda game and that absolutely holds true with its re-release. It also helps that the game’s soundtrack is one of the absolute best in Zelda history.

Skyward Sword sets itself apart from the rest of the Zelda chronology by being set before the founding of Hyrule and the earliest title in the official timeline. Most of the usual series trappings aren’t present, but the experience is still very The Legend of Zelda infused.

Abandoning her usual royal role, Zelda is instead an ordinary childhood friend to the lazy and aloof Link, and it’s this deep friendship that’s key to Skyward Sword’s compelling tale. As a reluctant student at the Skyloft Knight Academy, Link spends most of his life with his head in the clouds, but when Zelda goes missing, he must confront his own fate to see her again. It’s not the most innovative tale, with tropes like Link’s status as a chosen hero, but the ways in which the characters react to their roles in the Goddesses’ master plan all feel very human. 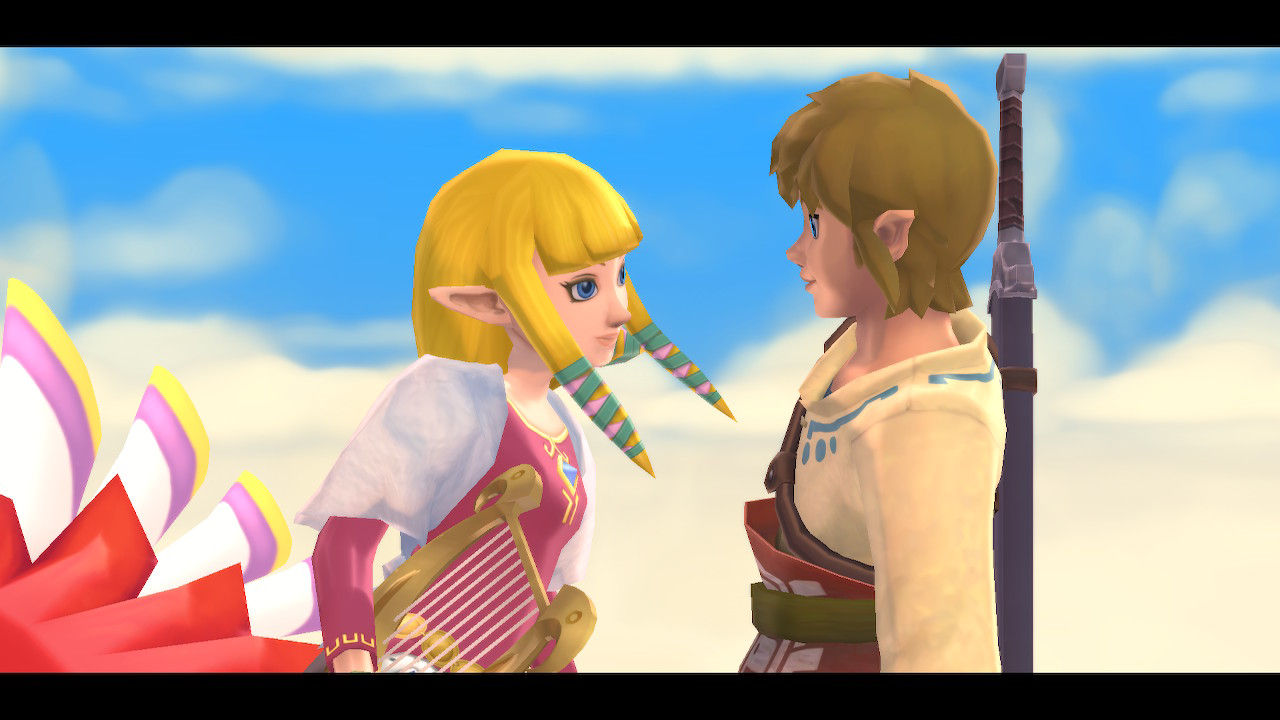 Take Groose, Link’s bully and Skyloft’s trouble maker. While he’s initially against Link’s destiny due to his long-harboured jealousy of his relationship with Zelda, he learns to accept his own role in the Goddesses’ plan. It might not be as heroic as Link’s escapades, but it’s valuable nonetheless.

Overall, every character in Skyward Sword carries an undeniable sense of purpose. Even extending beyond the core cast, the residents of Skyloft feel unique and alive. There’s no “miscellaneous NPCs” populating the floating isle, each character carries a genuine sense of identity. They don’t all share equal screen time throughout the various sidequests, but they go a long way in helping Skyloft feel like a genuine home.

This is largely to do with its excellent writing, another shining beacon of Skyward Sword’s design. While Link might be the silent type, the rest of Skyward Sword’s cast is wonderfully brought to life through its charming dialogue. I could go on, but the real star of the show is the Demon Lord Ghriahim, Skyward Sword’s primary antagonist. He manages to toe the line between exuberant charisma and bloodlusting rage in a way that makes him a joy to watch, with certain lines of dialogue that are far more graphic than you’d expect from a Nintendo game. 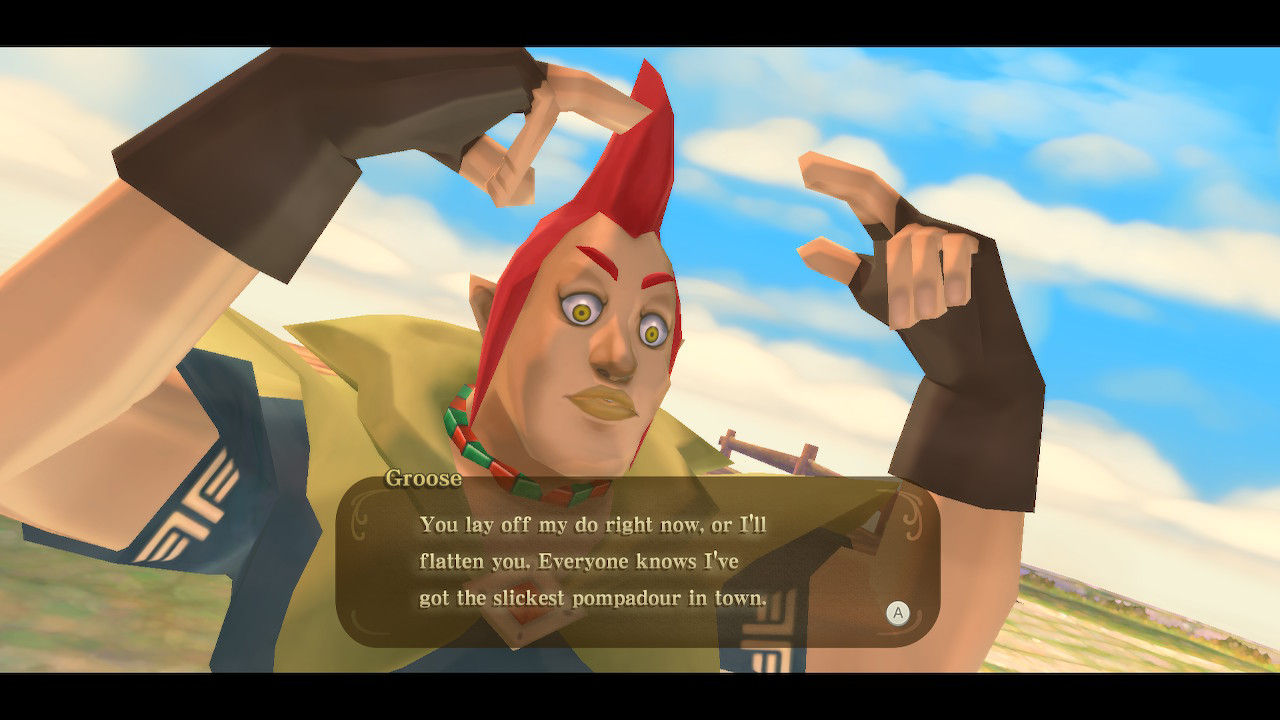 Although Skyward Sword’s story necessitates quite a lot of backtracking, it’s all worthwhile given that each return trip to Skyloft leads to new sidequests and character quirks to uncover. You can visit the bazaar to polish up your gear or stock up on potions, and new items in your kit allow you to uncover new treasure.

Unfortunately, the skies surrounding Skyloft aren’t as robust as the island itself. Aside from a handful of larger islands (most of which contain a minigame or two), the sky is strikingly sparse. If you were to survey the sky early on, you’d find most of the smaller islands yield several Goddess Chests locked shut. That’s because you have to activate a corresponding Goddess Cube on the land to unlock the skybound chest, which marks the chest on your map to go fetch. The concept of interacting between the land and the sky is fun, but it also means that most of the sky isn’t worth exploring until you’re told to.

Skyward Sword was initially critiqued for its overreliance on hand-holding, and Link’s companion Fi was the biggest culprit. Throughout the original, Fi would often forcibly appear to inform the player of anything and everything, as trivial or self-explanatory as it may seem. Not only was the assistance often grating, it also had the habit of spoiling solutions to some of the game’s trickier puzzles. Reminding you of the low batteries in your Wii remote was the worst of all.

Fortunately, Fi’s interrupting ways have been toned down in Skyward Sword HD. While you can still call on her at any time for help, she doesn’t force herself upon you like she used to. This isn’t the only quality-of-life update found in Skyward Sword HD, though.

The biggest update is likely the option for button-only controls. Not only does this allow for handheld play, it offers an alternative to Skyward Sword’s maybe-inconvenient motion controls.

It seems like every person you ask about Skyward Sword’s motion controls has a wildly varying experience. While I personally enjoy them, I’m not going to pretend they’re flawless. As gyro controls often have the habit to do so, the centre of calibration can easily drift out of focus during play. While recalibration was tucked away within a menu on the Wii, Skyward Sword HD changes this to a more accessible tap of the Y button. Realistically, it’s a quirk that shouldn’t be part of the controls at all, but at least the solution is relatively quick. 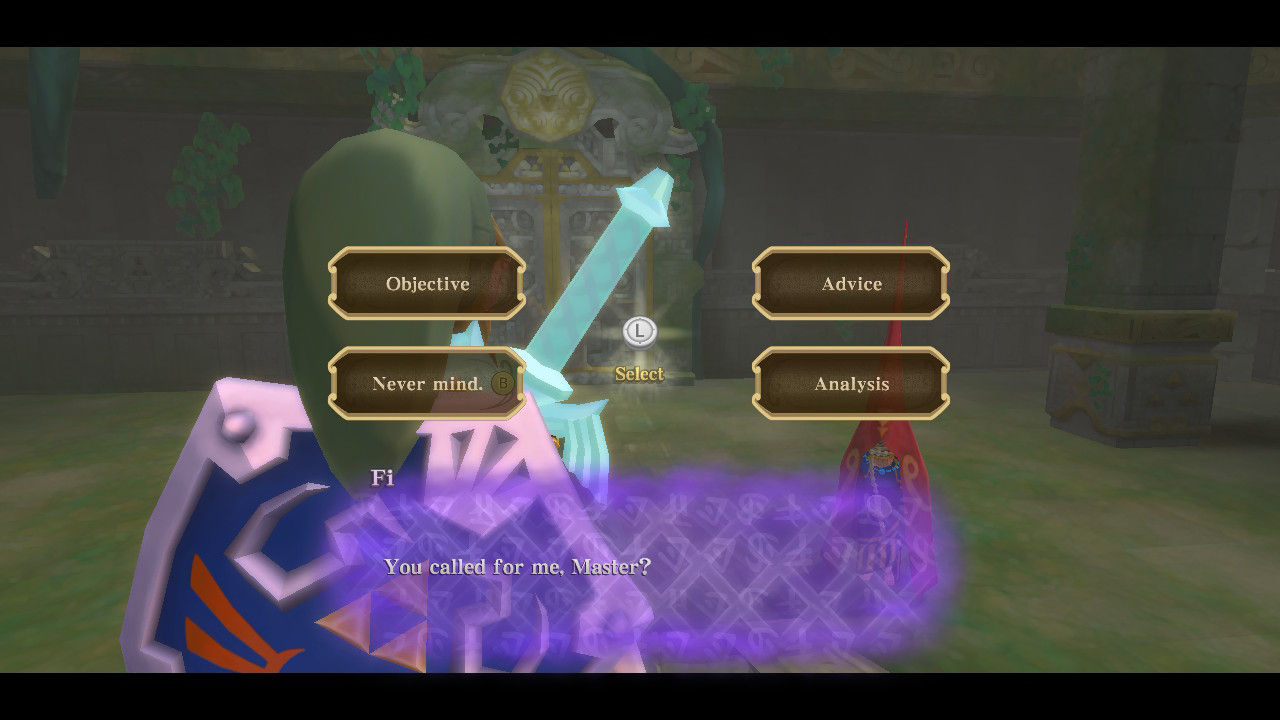 Unfortunately, the button-only control scheme has its issues, too. In order to replicate the gyro’s 360 degree sword play, Link’s sword is mapped to the right stick, meaning each direction on the stick executes a corresponding slash. This can leave the sword, among other items, feeling somewhat awkward to use compared to the original motion controls. It’s clearly a compromise and a welcome option to have available, but it’s an issue nonetheless.

The addition of free camera controls is also a welcome addition, if a clunky one. Given that, when not using motion controls, the right stick swings Link’s sword, those opting for button controls either have to hold down L to specifically control the camera, or maneuver it using motion controls. It isn’t exactly detrimental to the experience, but it is yet another example of Skyward Sword’s often clunky control scheme.

Furthermore, I found myself feeling like the two control schemes available weren’t enough since, unfortunately, either scheme is all or nothing. Only buttons or only motion controls, with no in-between.

In my case, motion controls were my preferred method for using the sword, but piloting the loftwing and skydiving would felt more natural using standard controls. When the game allows you to toggle gyro for aiming, it feels obtuse that some of the more unnatural actions are left to a shake of the hand. While I appreciate the option to deactivate motion controls, the ability to customise the option for each mode of gameplay would be better.

The HD part of Skyward Sword HD is thankfully a strong point. Skyward Sword’s watercolour inspired, painterly art style is given a proper opportunity to shine that some of the Wii’s blurry resolution often got in the way of. It might not look as vibrant as previous entries like The Wind Waker HD, but its more subtle visual style lends it to perfecting this look. Playing through the game at a solid 60 frames per second (bumped up from the original’s 30 fps) really ties together the experience as a whole. 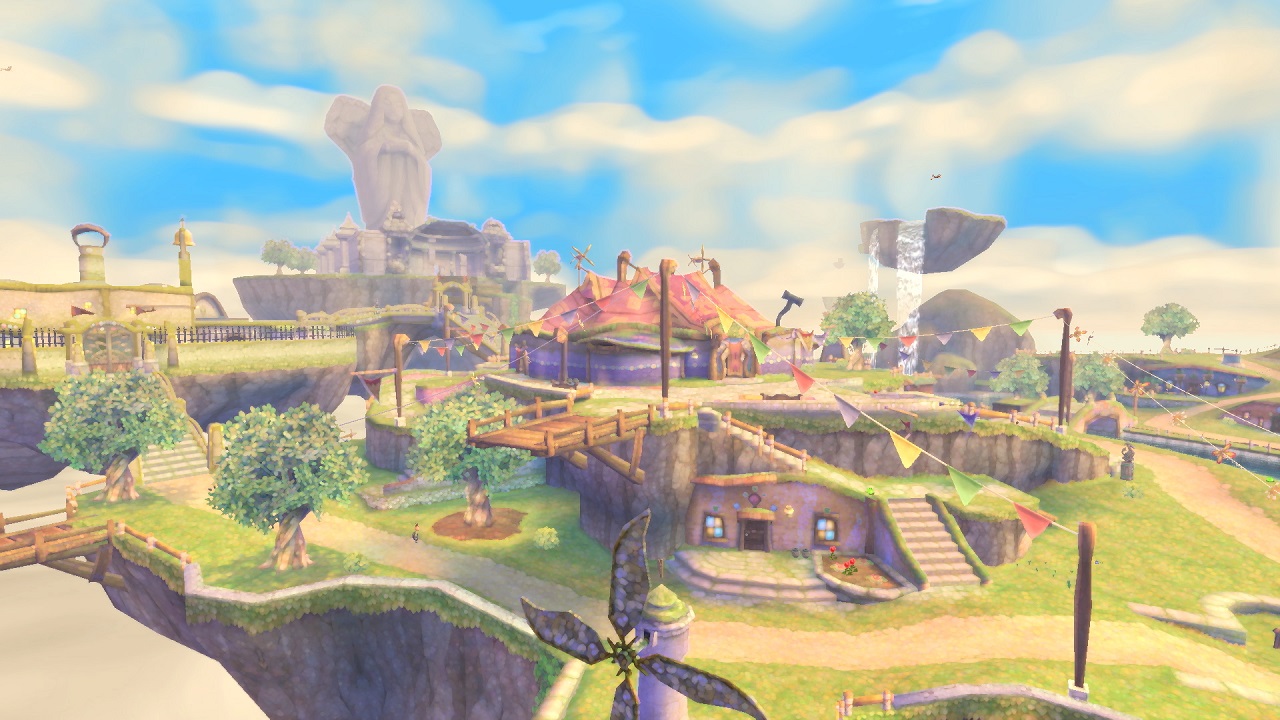 The changes in Skyward Sword HD aren’t exactly expansive. While I thoroughly enjoyed my time with it, the numerous complaints lobbied towards it over the past 10 years weren’t wiped away entirely. It’s fundamentally the same game as it was back then, so players more critical of the original won’t be won over by the remaster.

Still, there’s no denying that Skyward Sword HD is a downright improvement over the original game that irons out its biggest issues. Not only does it look and feel better, but small changes have been made to improve its often wonky pace. Not every aspect is improved (you still have to fight the Imprisoned three times, almost back to back), but for the most part, Skyward Sword HD is a joyous adventure.

While the changes made throughout Skyward Sword HD aren’t numerous, some of the original’s biggest flaws are smoothed out. It might not win you over if you disliked the 2011 original, but for new or returning fans, this adventure is a joy the entire way through.

[…] returned to the skies of Skyloft to review The Legend of Zelda: Skyward Sword HD and found that the handful of changes made to the original elevate it to “a joyous […]

[…] forgettable, and their bosses are largely the same (aside from the final one, for its own reasons). If dungeons are the main course of a Legend of Zelda or Zelda-like, those in Garden Story are barely […]