The Life and Suffering of Sir Brante (oh god, I have to do that every time) is “great trash”, to quote Pauline Kael.That’s not a bad thing. It’s been a while since I’ve had a proper narrative driven RPG, and although it didn’t blow me away, this one was certainly a nice surprise. As the title suggests, the game chronicles the life (and suffering) of one Sir Brante as he makes his way through life in a fantasy empire, and explores his conflicts with the three estates — peasantry, clergy and nobility. I’ve seen better worldbuilding, better editing, better themes, and so on, but this is a game that manages to be okay across the board, and the bar’s low enough that developer Sever deserves props for consistency in its first release.

With that being said, The Life and Suffering of Sir Brante isn’t perfect.

Let’s start with what worked: the gameplay and art, especially together. The art style is simple and consistent, but it fits with the tone. I’m a history buff, so I found a bit of charm in the illustrations looking like they’d be from an early printing press (only a little more cartoony and stylised). That atmosphere permeates the whole interface: we advance through the game by turning pages, occasionally seeing illustrations of key moments. This feels like the right sort of RPG for Unity, unlike NVYVE Studios’ P.A.M.E.L.A.. The minimalist elements also lend themselves to clear interface and gameplay. The game clearly signposts moments of player choice, and shows how they’ll impact the rest of the game beforehand (unless you choose to hide this feature). You’ll unlock more information and character traits as you progress (and Sir Brante ages), which you can view through bookmarks. It all comes together to give The Life and Suffering of Sir Brante a storybook feel, which is a great aesthetic for a narrative-driven RPG. 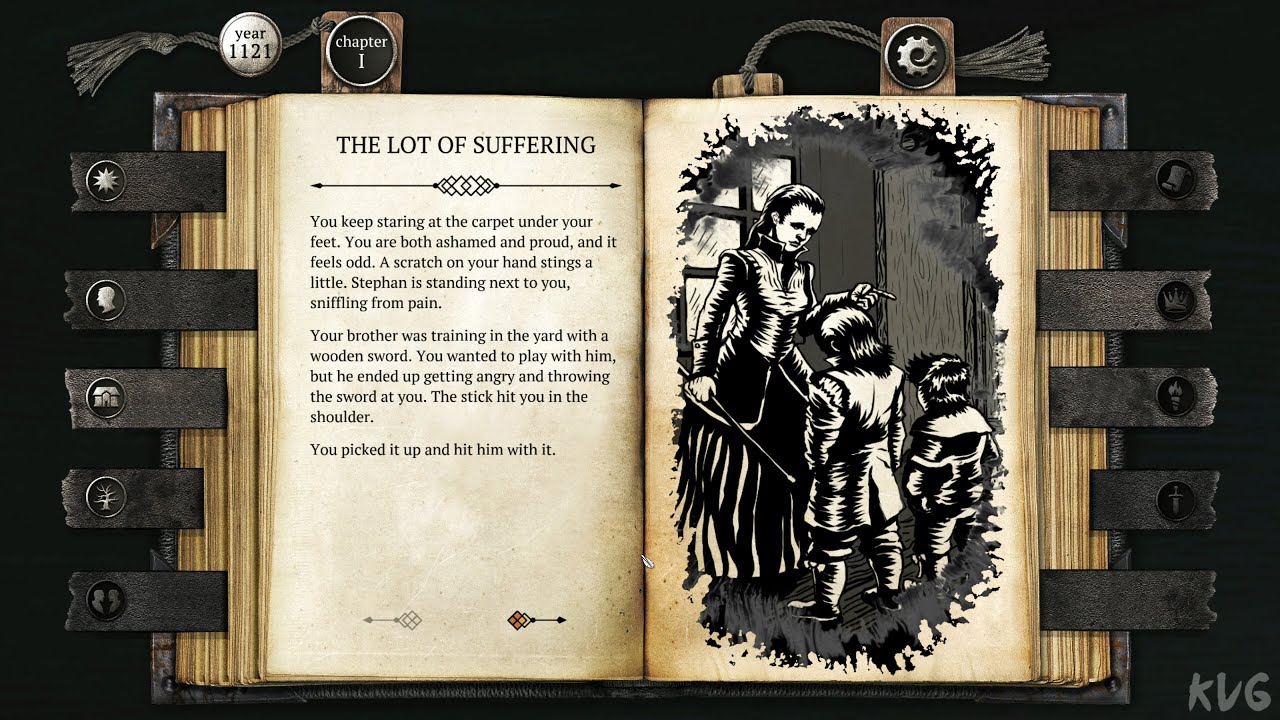 The core of any narrative-driven RPG is, indeed, the narrative, and The Life and Suffering of Sir Brante comes with a pretty interesting narrative. I’m always happy when writers incorporate game mechanics into their narratives, and Sever has done exactly that here. Every character, including Sir Brante himself, gets three “lesser deaths” and one “true death”, which creates a degree of impermanence in the earlier chapters and adds some tension to the later chapters when “lives” become more valuable. Furthermore, every choice you make has certain benefits and downsides: you might improve your own traits, which is useful for meeting prerequisites; improve your relationships with certain characters, which can provide benefits down the road; or you could improve your willpower, which is a requirement for some choices. Broadly speaking, there are two main directions in which you can take Sir Brante over the course of his life and suffering: you can either support the commoners or the nobility. It seems like a boring moral choice on the surface, but there are some intriguing nuances to it that branch out even further depending on whether you join the clergy, the nobility, or opt to remain a commoner.

As for what didn’t work, first and foremost, there are a few typos throughout The Life and Suffering of Sir Brante. I’m not always going to pick up on these, but they’re annoying given that this is a text-based, narrative-driven game. I’m willing to give Russian developer Sever a pass given that it’s working with English as a second language — and there aren’t too many typos — but it’s still disappointing to encounter typos in what’s otherwise a good game. Secondly, the AU$30 price point is a little bit ambitious for what The Life and Suffering of Sir Brante offers, but publisher 101XP has acknowledged this by offering the first two chapters as a free demo, so at least you can try before you buy.

Don’t get me wrong, though: it’s not a perfect game by any means, but The Life and Suffering of Sir Brante is an engaging, enjoyable fantasy RPG that encourages replayability by offering multiple different outcomes. It’s well worth a look if its subject matter appeals to you.

The Life and Suffering of Sir Brante is an engaging fantasy RPG. It’s not perfect, but the demo is worth at least a look.

Callum Johnston reviewed The Life and Suffering of Sir Brante using a retail Steam code provided by its publisher.