Narita Boy Review — The 80s Called, They Want Their Game Back

Fresh from Studio Koba comes a nostalgic journey into a retro-futuristic digital landscape drenched in 80s ambience. Inspired by games such as Castlevania and Double Dragon, Narita Boy is a pixelated wonder that holds true to Studio Koba’s mission statement of providing “unique and bizarre experiences for the player”.

Narita Boy’s narrative plays out like the lovechild of Tron and The NeverEnding Story. After demonic programs within the famous in-universe game Narita Boy steal The Creator’s memories, their son is sucked into the game world to become Narita Boy himself. So begins a journey through the Digital Kingdom in which Narita Boy will claim the Tri-Colour Sword, thwart the corrupt code known as the Stallions and defeat Him, a program hellbent on ruling the Digital Kingdom and breaching dimensions to take control of the real world as well. 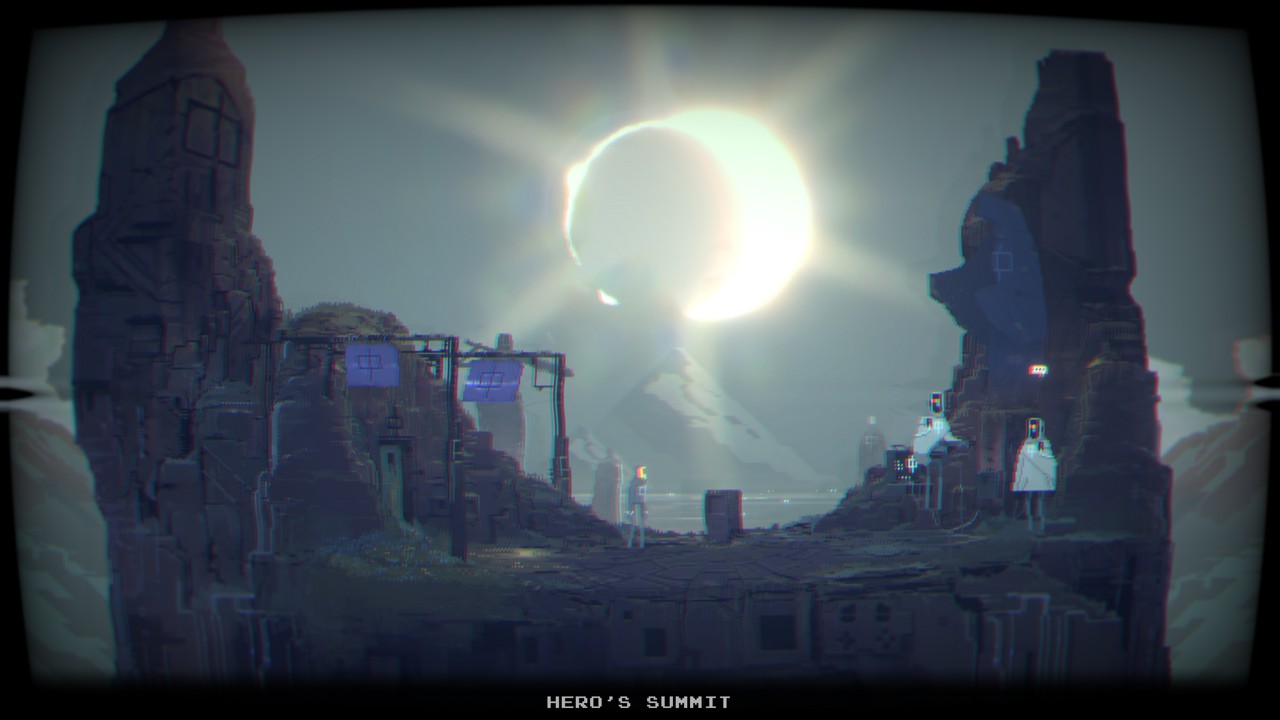 The stunning backdrops of the Digital Kingdom.

As an homage to arcade classics, Narita Boy provides a unique gameplay experience that blends modern game design with traditional. Combat is brutal and health can only be regained by striking enemies, so death is a constant occurrence, especially when learning the patterns of any of the numerous bosses. Thankfully, checkpoints are frequent and quick to throw you back into the action. This fusion creates rapid learning environments that develop a sense of momentum and continuous power-building, helped in no small part by the banging synth-wave soundtrack.

Your abilities start out basic but as you explore the Digital Kingdom and the Red, Blue and Yellow Realms of the Trichroma, you unlock new powerful attacks, support abilities and traversal buffs such as turning into a digital deer or riding a floppy disc like a surfboard. It’s all exceptionally wacky and wonderful, with NPCs constantly praising your arrival as the foretold saviour. True to arcade classics, you will slip and slide with momentum and find yourself foiled by pits far more often than enemies. 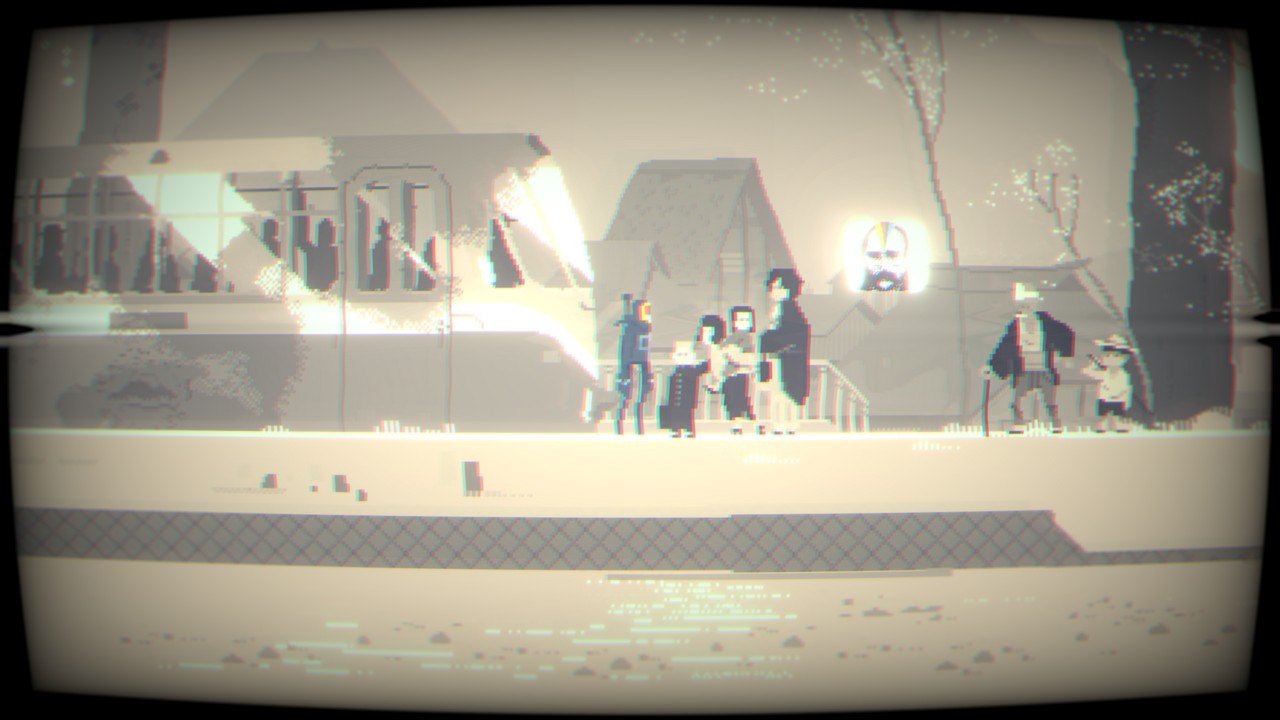 Soulful journeys through the memories of your father.

The art design flawlessly recreates arcade aesthetics and provides jaw-dropping environments to explore, with puzzle elements and plot devices dominating both the foreground and background. Unlocking the memories of the creator is one of the core goals and, in these moments, the player can enjoy pixel snapshots of powerful personal moments. The death of a parent, leaving the family home and first love are all presented in such a passionate and detailed way that showcases how engrossing pixel art can be. These scenes are the true pay-off to the painstaking labour that Studio Koba spent individually designing and painting more than 20,000 animation sprites, with all visual effects animated frame by frame.

The journey through the Digital Kingdom, as visually stunning as it is (and it is) would be nothing without Salvinsky’s beat-pumping, soul-rocking original soundtrack. The score makes every combat scenario more epic than the last, with cute rock out moments when your sprite busts a move in pride, while quietly elevating the tranquil memory sections, reliving your father’s touchstone experiences, sharing in his loss and love. 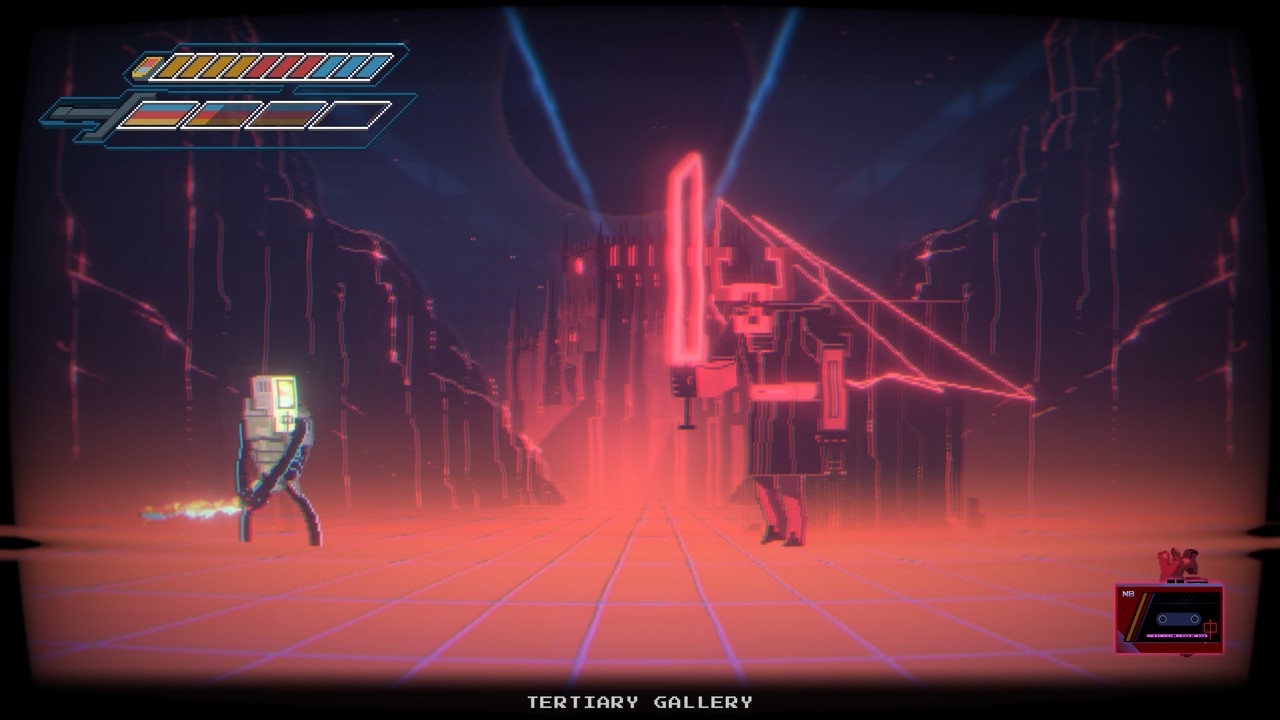 Epic bosses face you on your journey.

Narita Boy effortlessly flows from one moment to the next as soon as you load in. Each coloured realm brings their own trials and character while enemies and bosses have clear, exciting attack patterns that keep you constantly engaged as you retake the Digital Kingdom. Hidden rooms and moments are tucked away for the avid explorer but the linear plot provides more than enough complexity in combat and puzzles for any side-scrolling fan.

While clearly set up for a sequel, Narita Boy provides an epic reimagining of the son/saviour fairy tale set against lavish digital settings backed by a kickin’ soundtrack. Embrace the constant pop culture references of glorious geekdom and become Narita Boy in a standout experience born from a love of what came before.

A testament to handcrafted pixel-art perfection, Narita Boy pays tribute to the arcade classics of the ‘80s while also building on the foundation they laid.