Garden Story is unassuming and modest. Compact and neat, it spotlights the cute, colourful landscape so it can background its unexpectedly affecting worldbuilding and storytelling. While tedious busywork gets in its own way sometimes, Garden Story’s true strengths catch you by surprise. 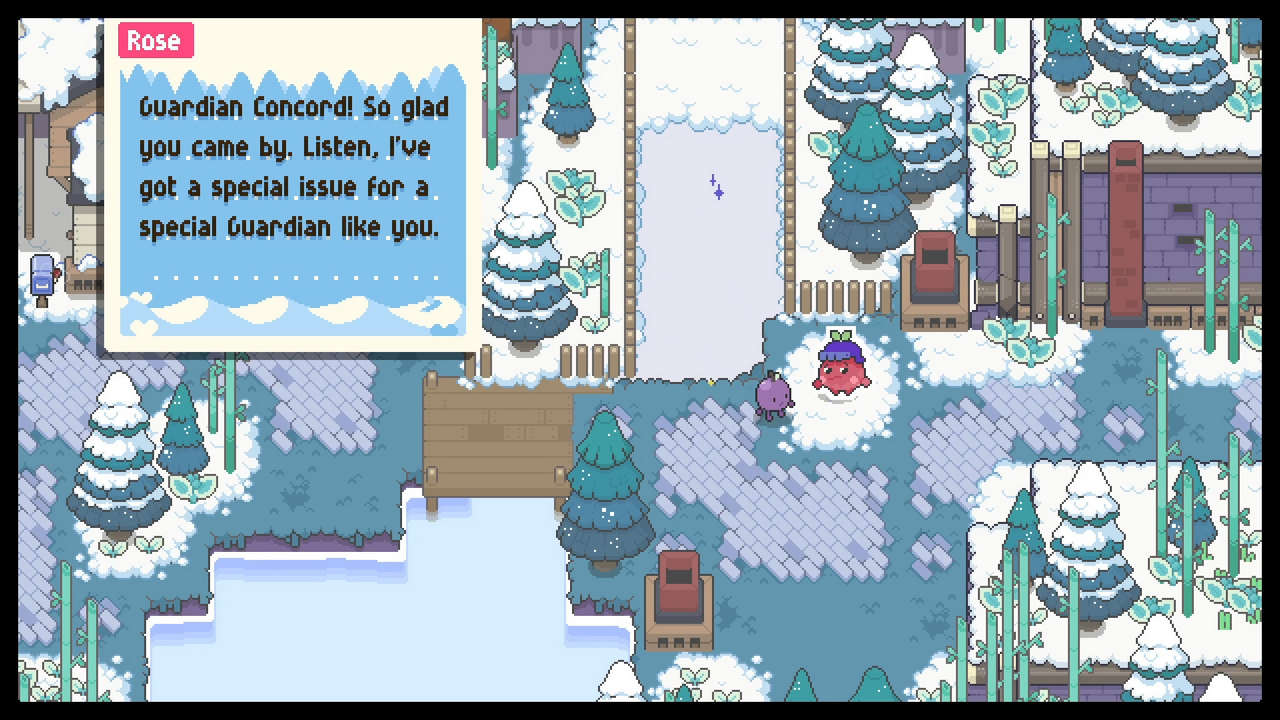 Garden Story is set on The Grove, a vibrant, whimsical but increasingly bleak natural island that has been slowly decimated by the Rot. Despite the hard work of the Guardians, there’s no end in sight. As efforts to stem the tide of total ecological destruction prove fruitless and with no more greenlings (read: children) born on The Grove, the youngest greenling Concord is suddenly made a Guardian and tasked with restoring the island and its people as best they can.

Garden Story has phenomenal worldbuilding, teasing out facets of the world and letting the player piece together many of its carefully decided clues themselves. Like Concord essentially being jailed in the “kindergarden” for their entire life to keep them safe from the Rot, because Concord is the final greenling — it’s a story detail that you can’t really miss but isn’t spotlit, either. Again and again, Garden Story will hint and imply with remarkable efficacy, gesturing to a world that is much more bleak, sombre and detailed than you expect from an otherwise cute and endearing cast of talking fruit.

At its core, Garden Story is about community. It’s about the individuals within them and what they need to survive, persevere and – hopefully – thrive. It’s about the difficult, sacrificial but rewarding nature of community and the hard-fought trials necessary to maintain it day-to-day. Against a grim backdrop, Concord works to heal a community that has been fractured and weakened by the rising difficulty of simply surviving in the only home they’ve ever known, of contending with an environment that, for reasons unknown, no longer supports them. As Concord, the player pieces each town back together through dedicated community action. 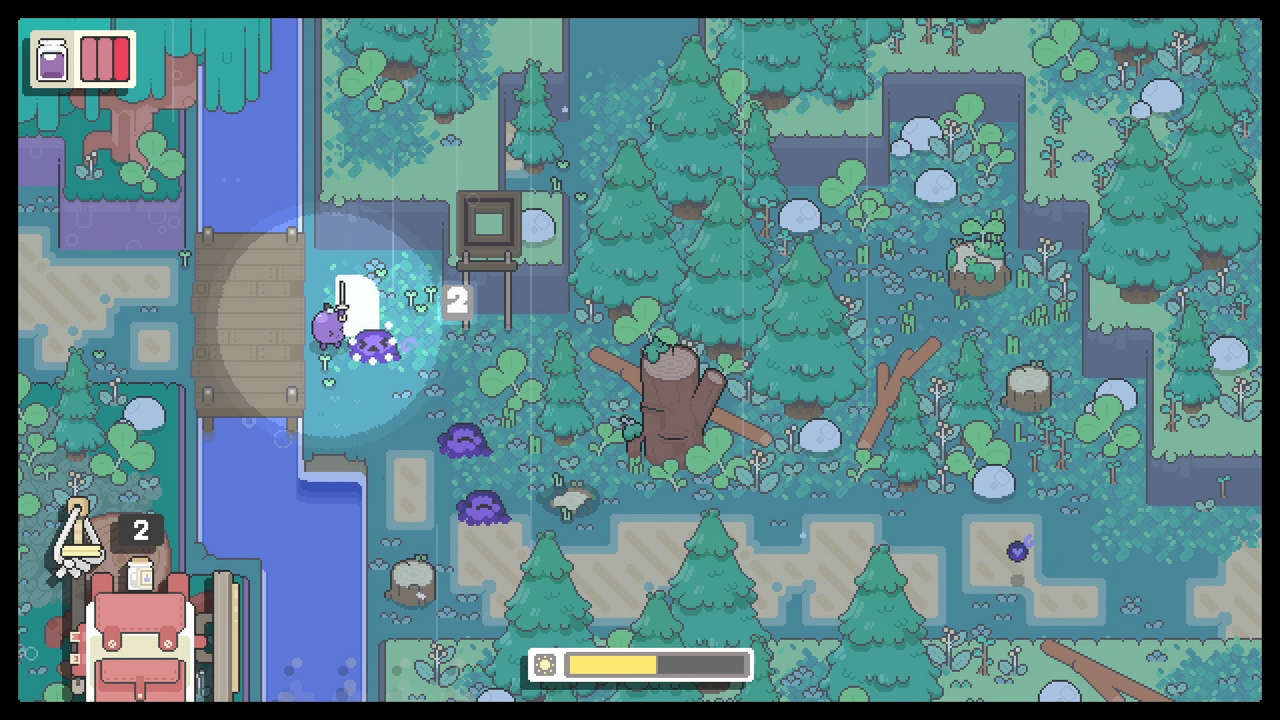 Garden Story plays like a top-down Legend of Zelda with a stamina system, navigating an interconnected world to fight back Rot, solve village problems, collect materials, farm and plant produce, conquer dungeons and buy dope hats until the sun sets. Once it’s nighttime, you go to sleep at your base, wake up in the morning and do it all over again. Each new village grants new weapons, upgrades and other stuff to collect, purchase and earn as you heal and reconnect each part of The Grove.

If you’re specifically looking for a Zelda-like, though, Garden Story is only partly successful. Its atmosphere, world design and story are gorgeous and striking, but it’s lacking in most other areas.

The handful of enemy types are initially clever, especially as they gain a unique “shell” in every area, but their novelty wears thin too quickly for the variety of weapons and “Dew” (health potions) types you gain access to. The stamina system — which controls how often you can attack, sprint and dodge — feels too limiting at the start of the game, then not limiting enough once you gain just a couple of early-game upgrades. There doesn’t seem to be much purpose behind it. By the halfway point, I couldn’t help feeling that the stamina system hurts Garden Story more than it helps, where managing my sprint throughout a village or my attacks against a series of enemies only makes those things more tedious than they need to be.

Maybe most disappointing, the dungeons in Garden Story are short, easy and largely forgettable, and their bosses are largely the same (aside from the final one, for its own reasons). If dungeons are the main course of a Legend of Zelda or Zelda-like, those in Garden Story are barely appetizers. 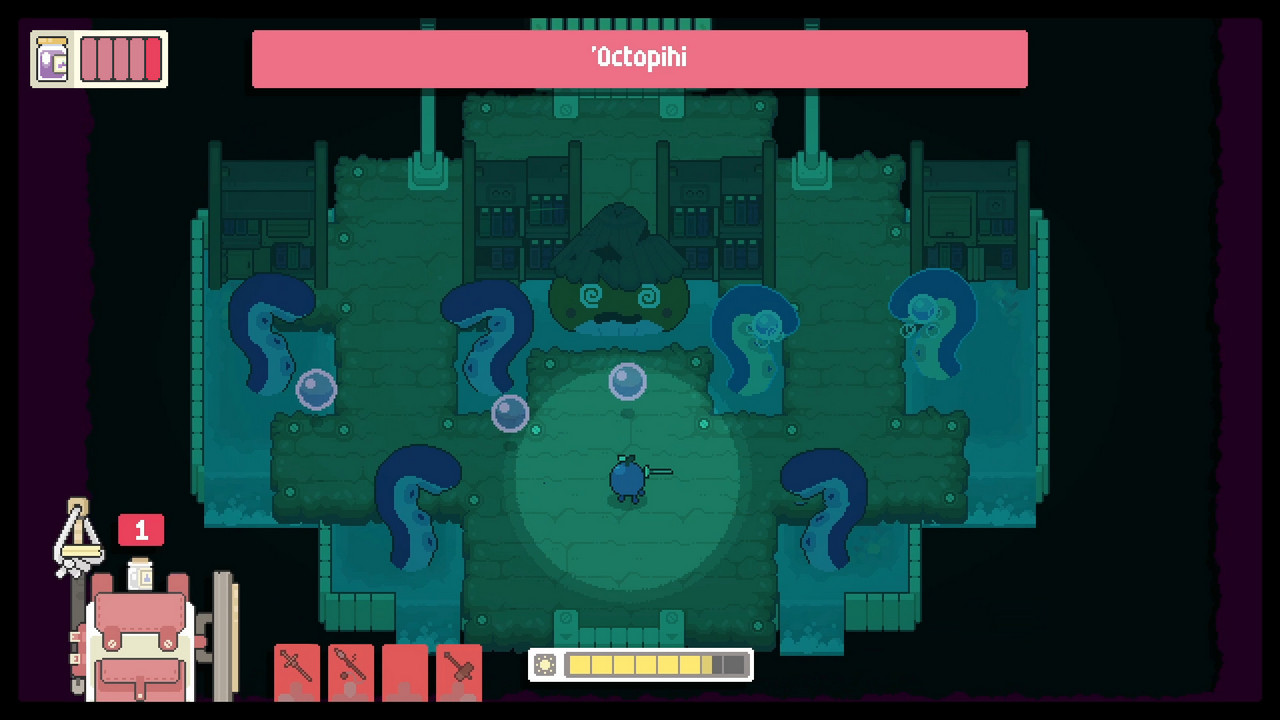 Each new day means having two or three new optional “Requests” to complete, which are basically repeatable MMO-like daily quests. Completing a request earns you a slice of EXP for whichever village you’re currently in, and reaching a new village level unlocks a new upgrade tier you can buy for a specific piece of equipment. Basically, they’re daily chores with a soft goal in the distance to strive for.

The main problem with requests, though, is that they’re very repetitive and very simple. There are less than 10 requests to cycle through per village, and each request is essentially the same as any other — Fetch This or Kill This. They’re chores, so their mind-numbing nature makes total sense, but they’re so tedious they actually hurt the game. I’d recommend ignoring them, or at least not dedicating much time to them over the main story or “favours” (which are side quests for certain characters). The upgrades don’t mean much and their tediousness actually hurts the game’s pacing, to the point that I found myself stalling and wanting to play other games instead. 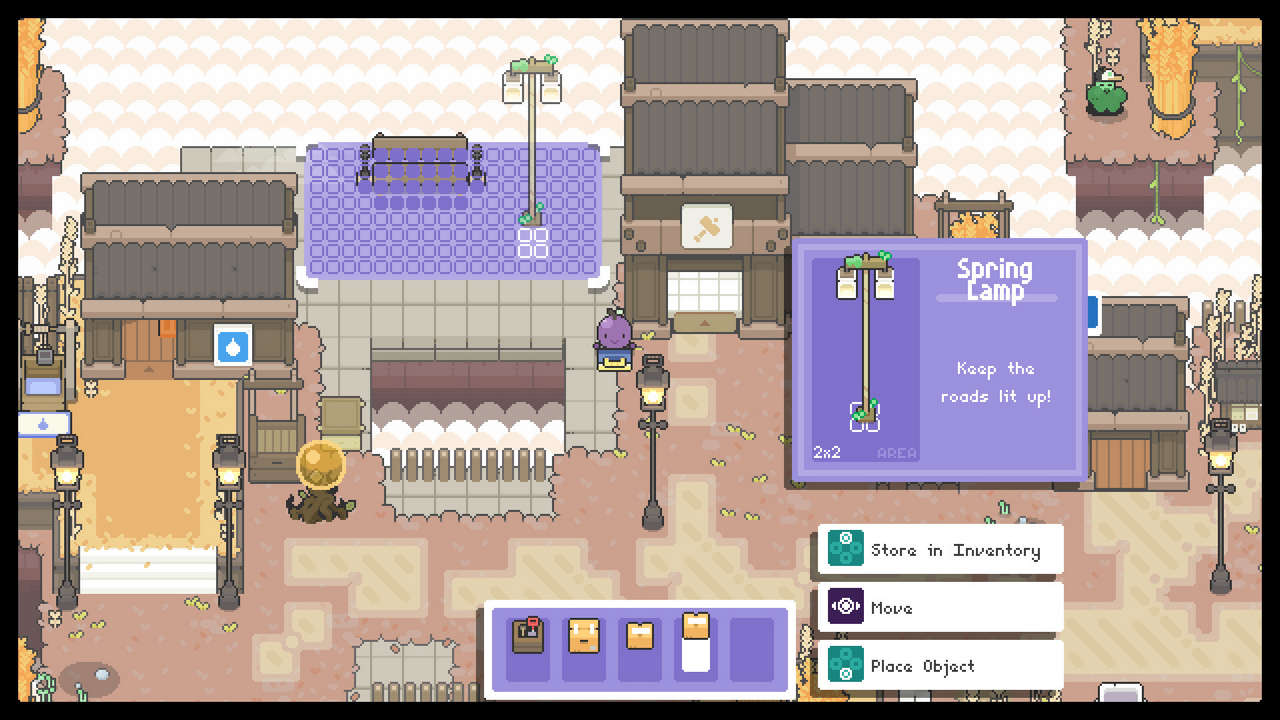 In a way, requests represent community action in the purest, most direct way: small individual acts of basic perseverance with little to no reward. A few progress bars crawl forward, sure, but you’re left out of pocket for sometimes valuable materials you could’ve used elsewhere. The idea is that you’re making small sacrifices of your time and goods running back and forth between the same exact places on The Grove to make other people’s lives a little easier. It’s the enactment of good intentions.

Being such a throwaway feature, though — in that requests are easy to ignore, earn you almost nothing and are largely unnecessary (the game is pretty easy) — hurts this idea. They don’t work not because you aren’t rewarded enough, but because they don’t help you feel more involved or connected to its small diorama villages. Requests don’t lead to any changes in the villages themselves (none that I could see, anyway) and characters never comment on any of this busywork you’re doing, so requests feel disconnected from the community that you’re supposedly spending all this effort to help.

The same could be said of the building feature, which lets you repair parts of a village and construct new things in certain zones, either cosmetic and functional. While it’s a cool idea, it’s really limited and never really worth the effort. You don’t get to go full Animal Crossing in customising each village, but instead get to slightly decorate a small corner at a time. New lampposts and benches are essentially useless, while adding new item boxes to certain areas feels like more work than it’s worth. If I’m going to be running across the map over and over again, what’s the point of setting up an item shortcut that shaves off five seconds? 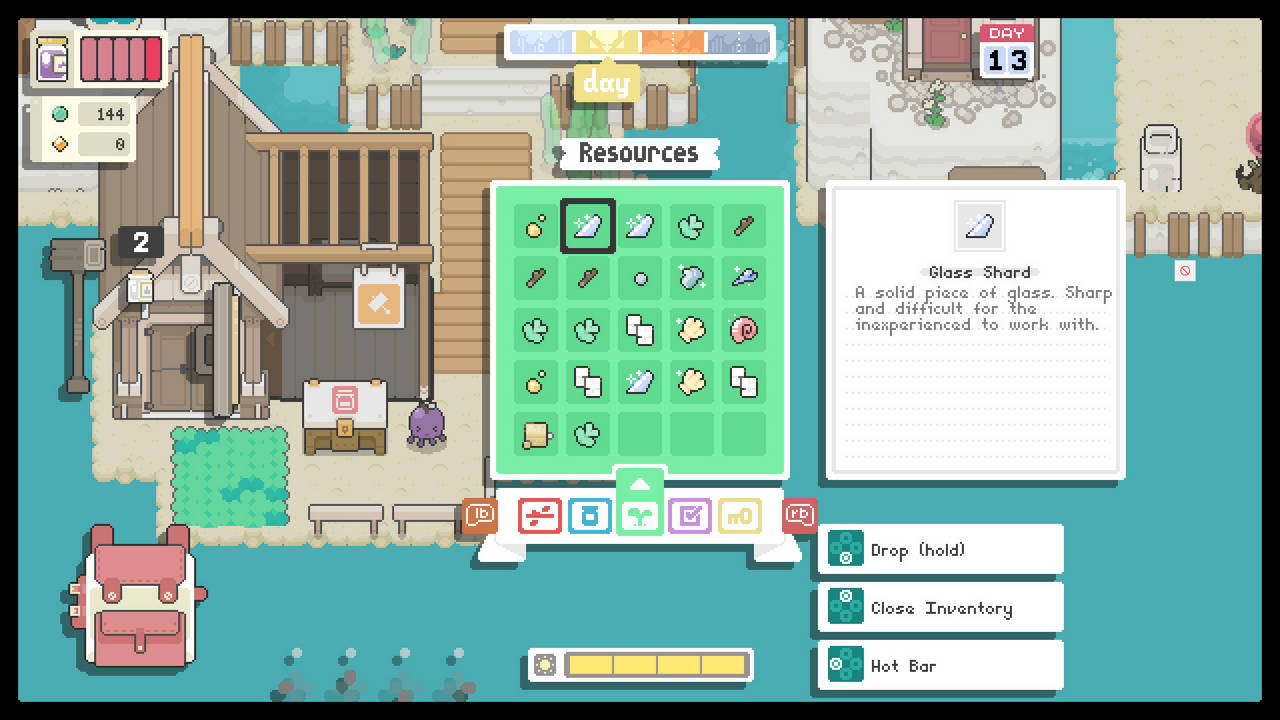 However, Garden Story clearly aims for a warmer, softer take on the action-RPG, where thrills and challenges start and end at a simmer instead of rising to a full boil. It’s a cozy winter weekend sort of game that offers a charming, absorbing world and cast while leaving stress and frustration (or at least the sort that’s common in games today) at the door. There are goals to work towards, but they’re small and often cosmetic, like buying a new backpack or setting up a new park bench.

Confidently unfolding a story about the perseverance of community and the role you can play in improving that community for the benefit of both yourself and those around you — Garden Story is tactful in what it wants players to take away from it. As long as you stay on the golden path and don’t wander too far into the weeds of its side content, it’s a lovingly crafted ode to the idealistic, sacrificial but necessary resolve needed to maintain a community, to maintain both the people in it and the physical place itself.

With climate change yanking our full stop closer and closer, as the bleakness of the world today becomes increasingly hard to face without turning to full-on nihilism, Garden Story seeks to ground the player in the present without forgetting or ignoring those inevitable challenges. It’s a gentle, hopeful reminder about the power of individual action, about enacting change where and when you can, and recognising that change doesn’t have to be groundbreaking to have a real impact.

There’s room for improvement, but Garden Story is a gorgeous and heartfelt ode to the notion of community and the people who live in them.

[…] reviewed Garden Story which, despite having some room for improvement, is “a gorgeous and heartfelt ode to the notion […]