Flowing Lights almost plays like a primer for bullet hell. Across 200 puzzles, developer gFaUmNe quietly gets to the heart of what the bullet hell genre is all about: intricate dodging gauntlets. While it may lack the manic bullet patterns, tightrope intensity, upbeat soundtracks and stress of true bullet hell titles, Flowing Lights unpacks the genre in some brilliant ways. 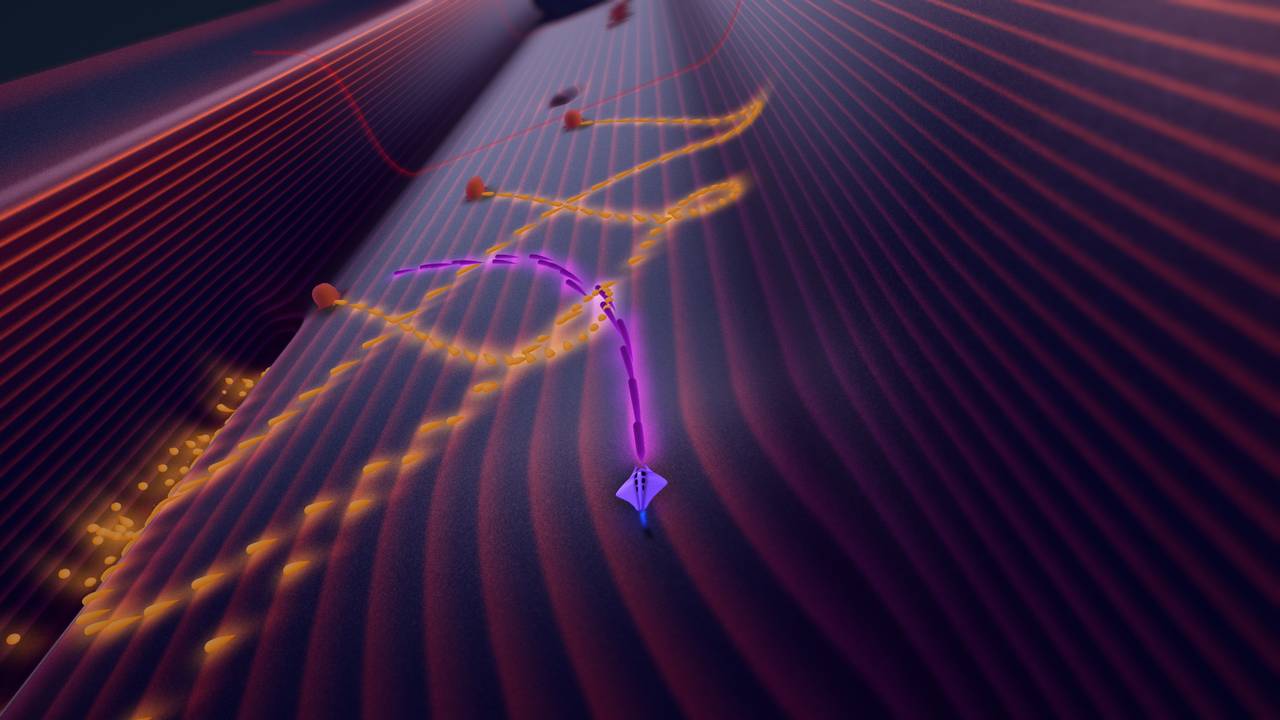 Using bullet hell as a foundation, Flowing Lights is an arcade puzzle shooter where all projectiles – from both player and enemies – are affected by the shape of the terrain. Slopes will curve, slow and accelerate your projectiles, which slip liquid-like across surfaces before fizzling out. It’s bullet hell made both physical and vertical.

The premise of Flowing Lights is only explained by a few scant sentences at start-up: a manta ray-shaped spacecraft is stranded on an alien planet and needs to reach the opposite pole to escape. The story might be scarce, but the visuals make a strong first impression.

A clean, minimalist take on alien deep sea settings with an understated look and feel, underlined by a moody electronic beat, Flowing Lights’ environments are as striking as they are smart and functional. Smooth night sky-coloured slopes rendered with lighting, materials and depth-of-field that gives it an uncanny life-like quality, while liquid projectiles and softly glowing lines stand out clearly against the dark blacks and blues of the terrain.

Functionally, each level of Flowing Lights is like a topographical map brought to life: hills and valleys being literally lined means that their slopes are easy to read at a glance, which gives you an immediate idea of how the physics-driven projectiles will react to any given environment. It’s like if a fighting game somehow turned a utilitarian grid-wrapped training room into a working art style – a clever fusion of function and aesthetic. 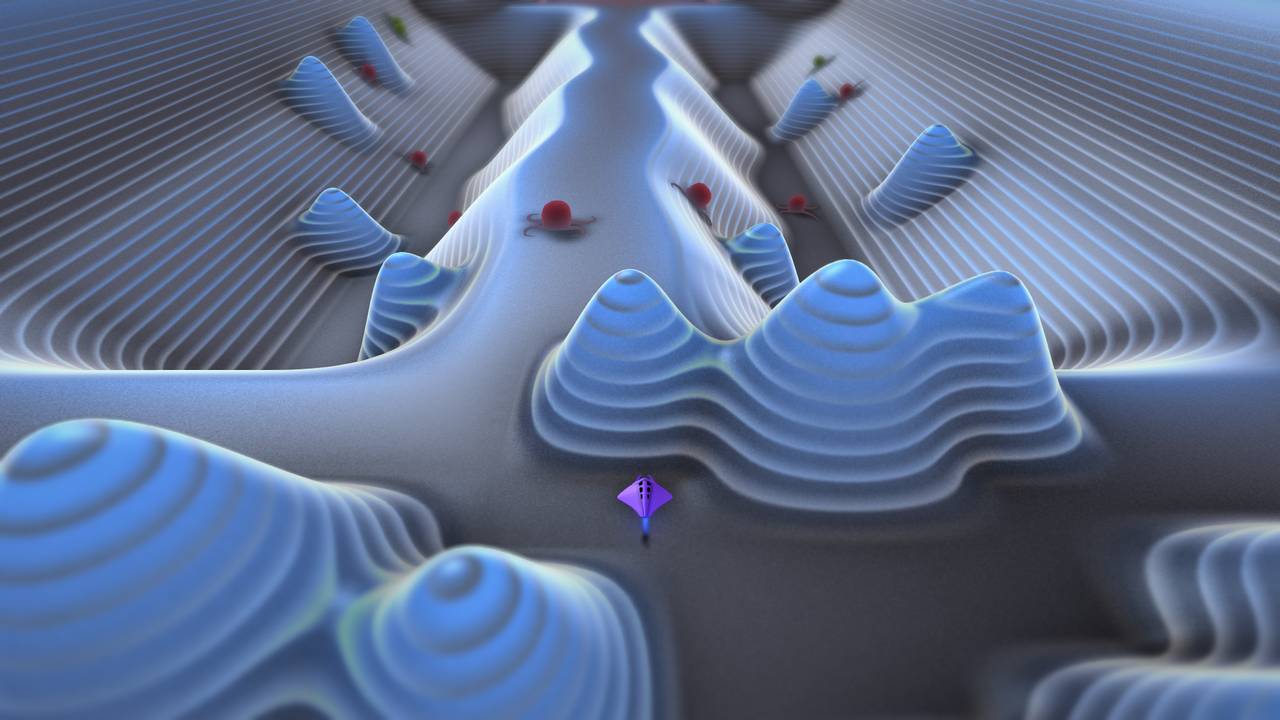 There are some basic similarities to start, like how each zone grades you an S, A, B or C ranking depending on how quickly and fully you “solve” it, and that each zone is already running before you start – sitting behind the starting line, you can watch the patterns and behaviours for as long as you need to. It has a similar gameplay loop as well, where you repeatedly throw yourself into the grinder just to painlessly respawn a moment later, or mid-game via the Plus (+) button, with no penalty for either.

The biggest similarity is in the way Flowing Lights combines puzzle logic and fast skill-based gameplay. You can stare at each zone before the starting line and think of a basic strategy to solve it, but you also have to execute this strategy yourself. The game demands both strategy and physical ability.

While Hotline Miami makes for a concise comparison, Flowing Lights is more of a puzzle game at heart (not that it tries to hide it). There’s a clear specificity and intention to both its puzzle design and the pacing of each larger level – then there’s the visual design mentioned earlier, too. There’s a remarkable level of grace, intelligence and approachability packed into Flowing Lights. 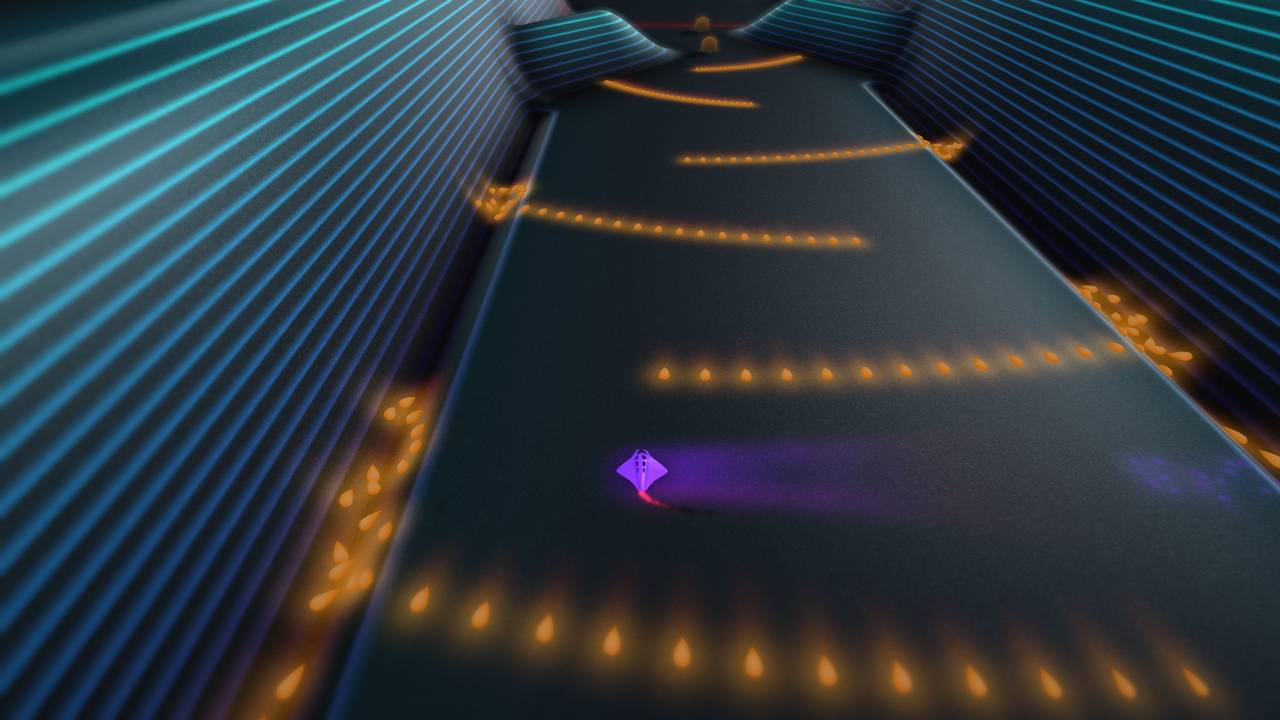 At some point, Flowing Lights gave me the same comfy vibes that a puzzle classic like Portal did. Pushing through its 200 zones, there’s a growing trust that the game knows exactly what it’s doing, where it’s clear that each zone has been designed in a fair but approachable way – that every solution is attainable.

Each level – a linear journey through a number of zones, about 20 or so each – focuses in a Nintendo-like manner on a single mechanic or theme. The slingshot dominates level two, the rapid-fire attack is the focus of level three, patience is the theme of level four, and so on. While the game shines brightest when it revolves around intuitive geometry — when it’s about hunting down the correct placement and firing angles to solve a zone — Flowing Lights does an excellent job of keeping each level varied and appropriately paced in terms of difficulty and theme. Its intricate, satisfying puzzle design rewards both perfect execution and thoughtful strategy without seeming obtuse or frustrating (though your mileage may vary).

Really, Flowing Lights is about refining your “solution” over and over again until you eventually succeed, no matter the score. While some zones can feel more physically demanding than I’d prefer (including one impressive but meandering platformer section), solving and perfecting a zone is always a matter of when, not if – which is why it reminds me of a classic like Portal. Flowing Lights is consistently smart, fine-tuned and player-conscious, with levels that cleanly chain together in terms of themes, difficulty and time-to-complete. 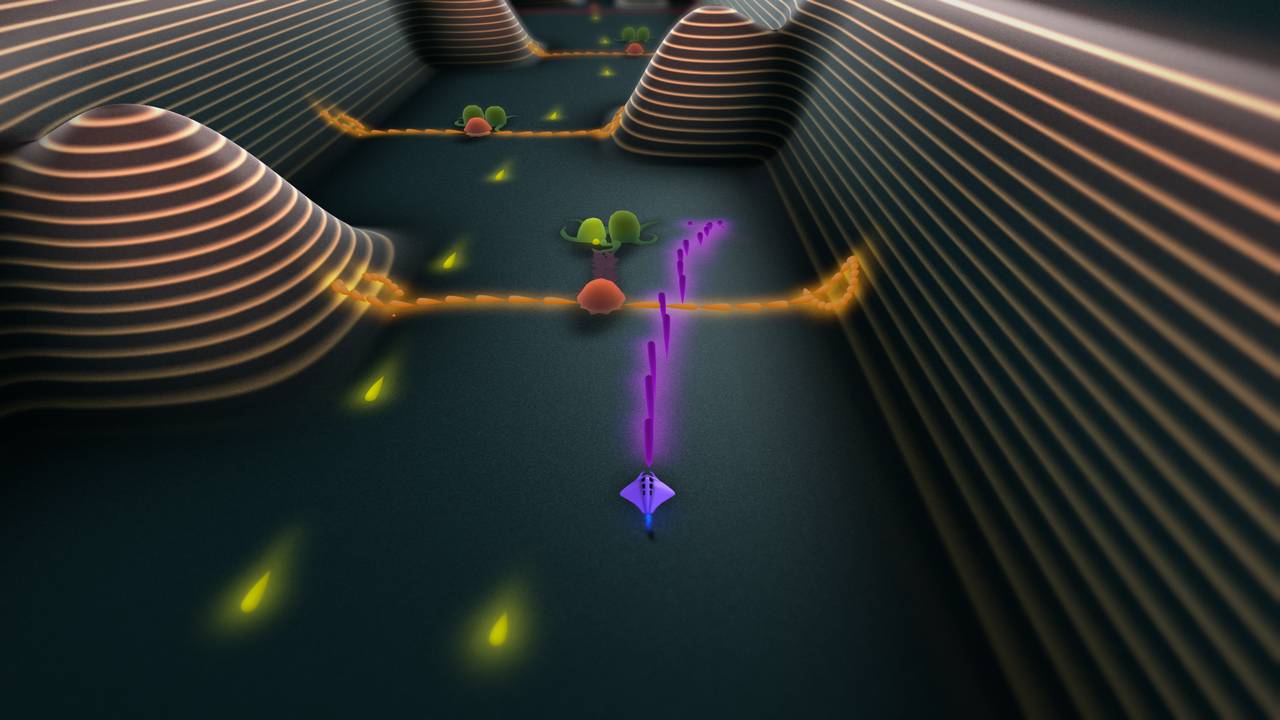 Despite that, Flowing Lights still has its frustrating moments, as rare as they are.

While the combination of puzzle logic and skill-based gameplay generally works well, it also means that there’s a dichotomy constantly looming over every other zone. There’s always an initial confusion about whether a solution is based on precision or reflexes, whether my strategy was wrong or I just hadn’t pulled it off quickly or accurately enough for it to work. This is usually cleared up after spending more time on a zone, but then there’s a handful that can last a while and eventually shift from intriguing to exhausting.

Which brings me to: at some point during Flowing Lights, you’ll end up aimlessly throwing yourself against a zone over and over. While health points and extra power-ups usually mean you don’t have to solve a zone perfectly if you don’t want to, figuring out even a low-grade solution can be frustrating. Sometimes just reaching the actual puzzle of a zone is draining in itself, too, where you spend far too long trying to push your manta-ship up a steep slope.

It’s also not a tough puzzle game, for better and for worse. While I loved the balance gFaUmNe found with Flowing Lights, delivering a very smooth and rewarding through line across the game, its most difficult moments are short-lived and you’ll find yourself at the credits sooner rather than later. There’s some replayability in upping the difficulty and tracking down the highest leaderboard scores, but not much. Still, Flowing Lights definitely packs in enough for its price tag.

For those curious or worried about the Switch port: with a very solid frame rate and native resolution (or close to it), it’s pretty much perfect. Not that Flowing Lights seems all that demanding in the first place, but it’s still a relief when poor Switch ports are becoming far too common. 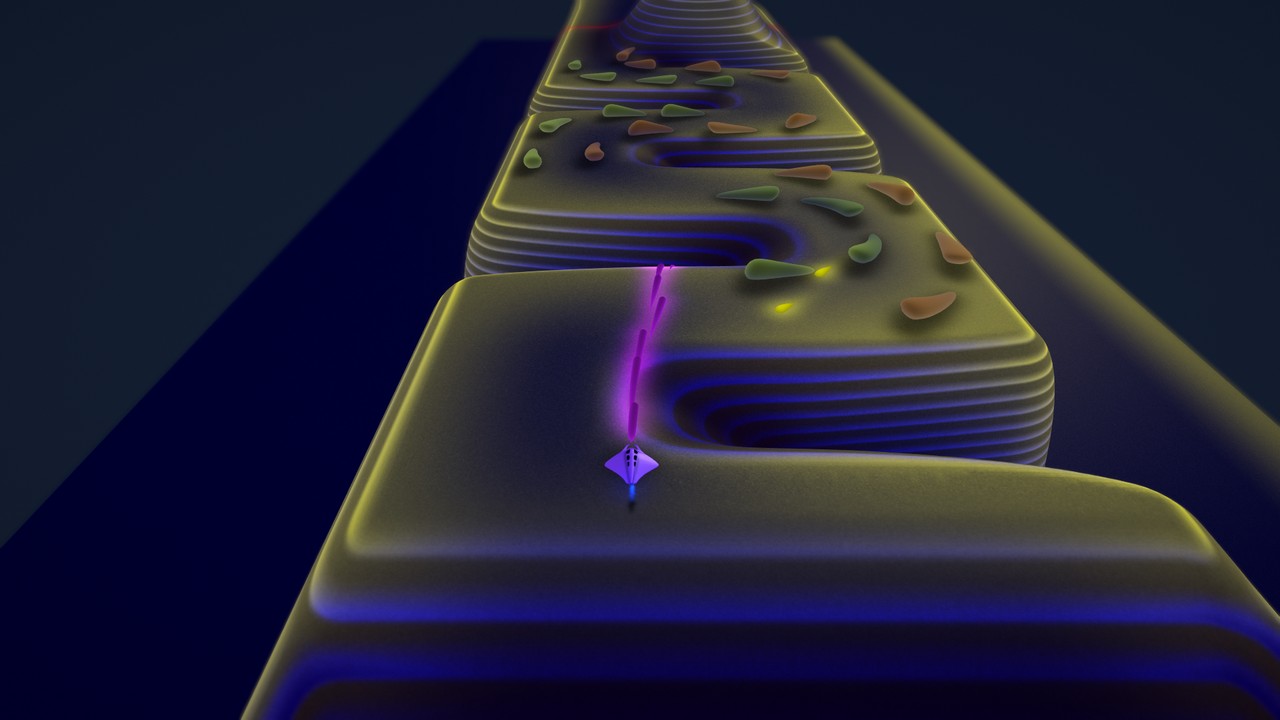 Flowing Lights unpacks the bullet hell genre to deliver an excellent puzzle game. It may be short, but it’s sweet enough to – in some ways – rival the classics.