The screen flashes. After a flurry of panic and alarm bells, Selene crash lands her ship on the alien planet of Atropos. As she emerges, disoriented and frightened, the way forward is clear: break the cycle, and leave this place. Returnal is without a doubt one of developer Housemarque’s most impressive releases to date, a shining example of a premium Rogue-like experience wrapped up in an intriguing plot and topped off with phenomenal combat mechanics. Some Rogue-like elements bear the only minor issues I had with the overall package, but never detracted from the satisfying moment to moment gameplay.

Returnal’s premise is simple: you play as Selene Vassos, a deep space explorer who has crash-landed on Atropos. You’ll need to use all of Selene’s skills and wits to explore and escape these new surroundings, with each death sending you back to the crash site to venture out and do it all again. Returnal’s story is admittedly intriguing at first, with plenty of creepy imagery and fragments of context which can be gained from the corpses of Selene’s failed attempts. It moves forward at a consistent pace but does lose its footing in the middle portion of the experience, where the extreme difficulty plays a part in keeping you at bay from the next big chunk of story. While it wraps up with enough context, there are a few ambiguous elements that deserve some deeper digging. The repetitive Rogue-like elements are inevitable, but the story does go missing when you consider the game’s at-times overwhelming difficulty, and those moments when you’re forced to restart a lengthy stretch of gameplay; I can imagine that that’s exactly why Housemarque designed Returnal’s premise to be so simple. 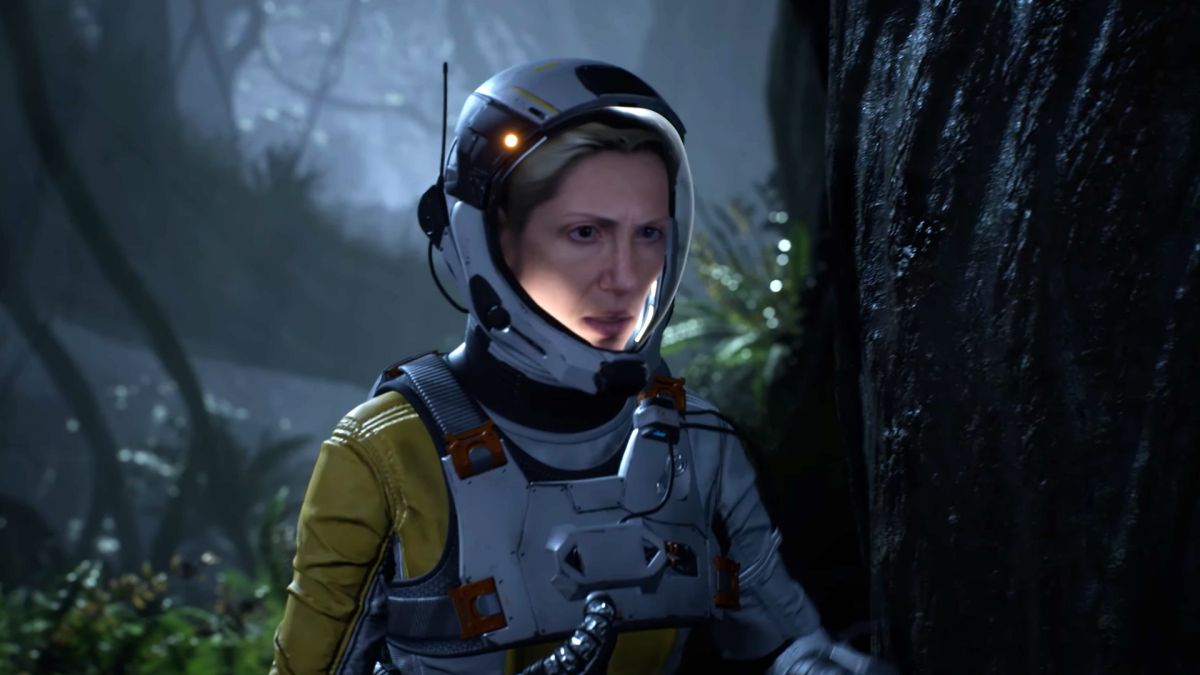 Thankfully, Returnal’s gameplay and combat makes up the majority of your time on Atropos. Gunplay is fast, responsive and chaotic as you dash and weave your way through a multitude of enemy types and challenging boss battles. Utilising a number of traditional and alien weapons yields a number of effective and interesting results, with each weapon featuring their own alternate fire. From pistols to assault rifles and launchers, each weapon can prove useful, but not in all situations. Weapons are randomly generated, either when you discover them or an enemy drops them, so you won’t be able to count on overusing any favourites.

Movement is fluid, and traversal abilities including boosted jumps, dashes and a grappling hook — which you gain access to later — all play a part in defending yourself and exploring the outer reaches of Atropos. While the difficulty is harsh at times, it never feels outright unfair, or due to any gameplay mechanics or shortfalls. To say that it’s completely fair is a stretch, as the game mentions at the very beginning that you will indeed be tested, but I found myself questioning my own decision making and reflexes as opposed to dodgy controls and mechanics.

You can also equip and discover a number of abilities, from general suit abilities, to the more nuanced Parasites. These abilities — of which you can equip and use a maximum of two at any one time — range from small health boosts and shields, to ground-pound attacks that generate a large shockwave and damage everyone around you. Each ability is unique and useful, but given that each run is entirely randomly generated, it becomes apparent that particular abilities are, in fact, key to a successful run.

Parasites work very much in the same way, but with a catch: each Parasite that attaches to Selene’s arm, boosts a mechanic or feature within your suit, but also hinders another. For example, weapons might do 10% additional damage while the Parasite is attached, but damage Selene slightly every time she collects an item moving forward. These small choices come with a large amount of pressure, but once again, as they are randomly generated throughout each run, some will not suit the situation. 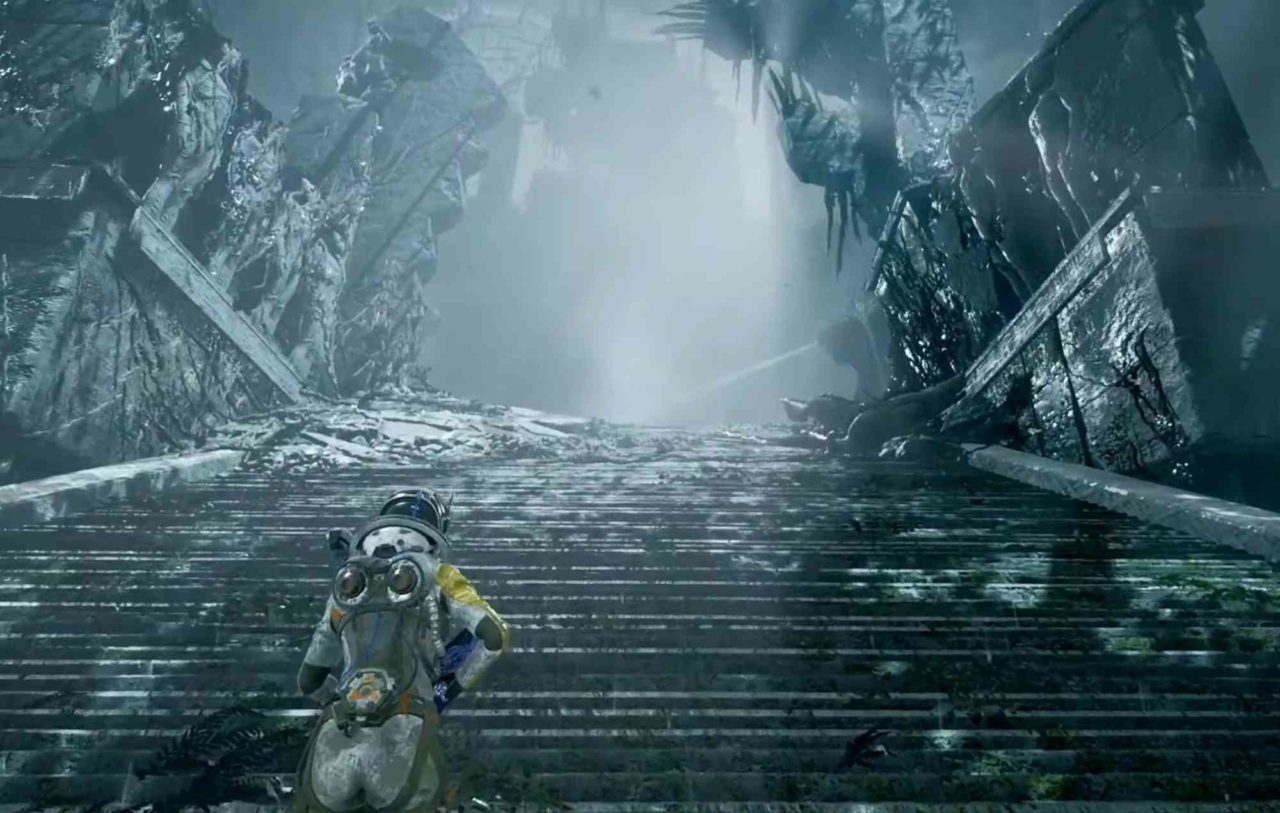 Beyond all the story and gameplay mechanics, it’s also worth noting just how good Returnal looks in every frame. As a next-generation exclusive, Housemarque has squeezed a considerable amount of polish and consistency out of the PlayStation 5, with impressive lighting and a smooth frame rate. I rarely experienced any glitches or bugs on my run-through, although word of corrupted saves seems to have spread amongst players. The sound design is also incredible; every little bit of the environment is responsible for some sort of sound, whether it’s the cracking of branches underfoot, the whistle of the wind or the eerie synthetic soundtrack. Much of this is owing to the 3D audio techniques that Housemarque has implemented, which I hope and pray will become standard moving forward. The DualSense controller’s intuitive and satisfying haptic feedback — present in the pop of the trigger to the slight vibrations mimicking the pitter-patter of rain — rounds out Returnal’s superb presentation, helping to create a fantastic level of immersion throughout your experience.

Returnal is extremely difficult, and that might drive some casual players away, but there’s very little reason to say no to a game with such an intriguing story, beautiful visuals and engaging core gameplay in the first place. Returnal is a blast and, to be quite honest, I can’t wait to get back to it.

This article was originally published on Doublejump. If you enjoyed what you’ve read, you can support the site further by following us on social media, becoming a Patron, and/or purchasing some merchandise