In the far-flung future, post-apocalyptic humanity lives on in the skies, battling themselves and the mysterious Swarm for the most valuable thing left: cabbage. I’m serious, the main gameplay loop of Hungry Couch Games’ Black Skylands involves growing food (the most easily grown being cabbage) and selling it to buy guns and airships. It’s a lot of fun. The artstyle is colourful, full of character and immersive. The story, on the other hand, is a little underwhelming so far, although it is still in Early Access and so there’s hope on that front.

The central thrust of Hungry Couch Games’ “skypunk” game is in its aerial movement and combat, and Black Skylands manages to do well for itself, within its limitations. The gameplay is distinctly separated between airship travel and combat between islands, and running and gunning once you’ve landed on those islands. Both mechanics are well done, but they do run the risk of getting stale: after a while, islands and enemies could start to look the same and lack challenge, and traversing across an open world can quickly become the worst part of a game (cough Ubisoft cough) — Hungry Couch Games manages to avoid that drawback by properly leveling and labelling Black Skylands’ world.

An open world needs to be both open and engaging, not just big. In Black Skylands, it is just that. You can go wherever, whenever. The only real limitation on your space travel is your airship’s fuel, and fuel stations are well placed to ensure that you can top up whenever you need to. The main catch, therefore, is the enemies you’ll face: human enemies in higher level areas may be well emplaced, able to take down your airship in seconds, while the Swarm — a scary storm of bug creatures — are resistant to conventional weapons and require specific upgrades that you can either acquire or purchase along the main questline, which offers some useful guidance for progression rather than a strict path. You’ll mainly find yourself getting your hands on these upgrades through the base building mechanic which, despite not being too expansive, is the main way in which you’ll upgrade both Eva and her airship. These upgrades are limited by resources that are usually either sitting behind a wall of guns or teeth, but getting them gives you even more options for gameplay and helps you get even more resources. Some resources can even be traded for cabbages. There’s a bit of waiting involved, but it’s rarely longer than it takes to go to an island and shoot some lads. Along with the base building, Black Skylands has ship and weapon customisation, allowing you to balance the weight of various ship components and drawbacks of certain weapon mods with the benefits that suit your specific style.

The islands themselves are occupied by human enemies that need to be cleared out to access side quests and rewards. My personal favourite is a gun called the “Twisted Assault Rifle”, forged by a blind gunsmith and looking appropriately post-apocalyptic. It’s a surprisingly powerful weapon with one significant feature: its bullet trajectory curves, making aiming a little harder in exchange for more damage. It’s a nice piece of world building. One of the main trading islands is on the back of a giant turtle, which I suspect is a nice tip of the hat to Terry Pratchett’s Discworld. This isn’t just a reference for the sake of it, though — it fits in a world of islands floating in the air, immense Lovecraftian horrors in the distance, and tyranid Swarms closing in on you.

Like the gameplay making the most of its limited system, the art style really sells the tone. Rather than attempting an aesthetic grittiness blanketing the world, Black Skylands has a distinct and colourful world. This makes entering Swarm territory truly terrifying: the colour changes from the blues and greens of the rest of the game to reds and purples, which really helps to convey that you’re entering a hostile, alien world. Even the main character’s design contributes to the storytelling: aside from tracking her health, Eva’s portrait in the lower left of the screen also has a deeply tired expression that just seems so appropriate for her. Combined, the art and the gameplay succeeded in making me feel this “skypunk” atmosphere. 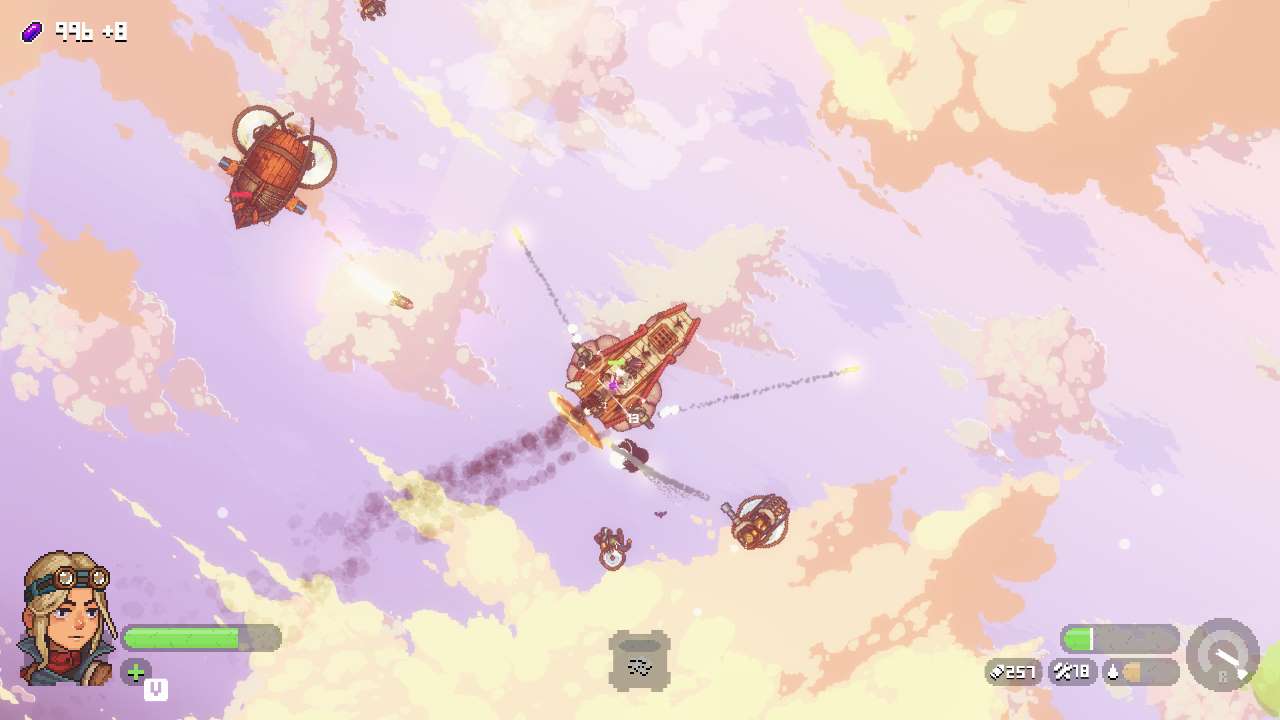 You may notice that I haven’t said too much about Black Skylands’ story itself, and there are a couple of reasons for that. Since the game is still in development, the story is incomplete and so it’s impossible to make any conclusive statements about it without having a clearer picture of the finished product. What’s there, however, is underwhelming. It’s got the essence of a number of ideas — some good, some not so good — thrown together quite haphazardly: main character Eva is on a revenge quest against a former family friend turned tyrannical gang leader, and also to uncover the mystery of the tyranid-esque monsters known as the Swarm. There’s also some talk about factions and families, but it’s often unclear whether there’s any distinction between the two.

I wouldn’t say the story is bad by any means. It certainly didn’t detract from my overall fun with the game, but the occasional typo or poor story element did take me out of the moment, with the typos being especially disappointing given that Black Skylands tells its story entirely via text. Looking back, though, I can’t help but compare just how effectively the art and gameplay do what the writing tries to do — and only partially succeeds at.

Although I do have my issues with the Early Access system given how opaque many developers and publishers tend to be and the lack of guarantees that they’ll actually see their projects through, Hungry Couch Games and publisher tinyBuild look to be going about it correctly. With an active Discord server for the game through which they’re delivering consistent updates and community engagement, frequent patches and updates to the game itself, and an engaging, entertaining product in its early stages, there’s plenty to look forward to from Black Skylands.

Although Black Skylands’ story is hit-and-miss in its early stages, its art and gameplay are both subtle and entertaining enough to make it an engaging title with plenty of promise.