Right before the 2016 revival, the second Hitman movie amps up the stupid

Welcome to Press X To Adapt! In this series, we dive into a game-turned-movie or movie-turned-game to take a look at how it turned out, the differences between the two, and anything else worth chatting about. If you have a suggestion or think we missed something, let us know on the socials or in the comments below!

The first Hitman movie‘s opening was simple but intriguing. In stark contrast to the rest of the (very mediocre) movie, it suggested something intimate and complex. It seems like the beginning of an entirely different movie, like they started filming with one script then switched to a Bourne-ier one.

The 2015 reboot, on the other hand, has exactly the type of opening it deserves. It still has the same job as last time – to catch us up on Agent 47’s backstory so the movie can kick off with a bang – but where the original artfully summed up 47’s origins, Hitman: Agent 47’s introduction is just a bony punch to the face.

It’s a lecture. It explains that Agent 47 is a genetically-engineered clone from a super soldier program (very similar to the games), that its creator suddenly abandoned it decades ago and is now on the run, and that others tried and failed to pick up where he left off. The clones that were successful are in the wind and have gone indie, working as they may. It’s charmless, generic sci-fi.

After our lecture, the movie kicks off with Agent 47 luring his target to a bunker for – just like last time – a noir-ish intro where he aims a pistol over a desk and is offered whiskey. Gunmen descend into the bunker and 47 plays out John Wick But Worse, garrotting at least one poor soul with his fiber wire (a notable omission from the original movie) and then shooting through the rest, because that sounds like something Agent 47 does: loudly murder everything in his way.

Then we jump to Berlin and meet our viewpoint character Katia. Played by Hannah Ware, Katia is agitated; she’s working every lead she can to hunt down her father, and she’s been stuck with a royally unhelpful records officer. She’s pretty compelling from the jump and a grittier, colder hero than I’d expect from this sort of “eh, good enough” action-thriller. For mysterious reasons, Agent 47 is on Katia’s trail.

With his crystal baby blues, Rupert Friend’s Agent 47 is a far more faithful take on the character than last time. He’s basically a T-1000. He marches stoically towards Katia with impossible precision and forethought, an unstoppable machinic killer on a warpath towards his only target. It’s almost too much when 47 sits upright on his hotel couch, closes his eyes and just sleeps, like he’s a parrot or a light switch – but it works for this android-like and kind of frightening rendition. His line delivery evokes David Bateson’s smooth, reptilian voice from the games, too.

Speaking of The Terminator, even the story of Hitman: Agent 47 is really similar. Katia’s Sarah Connor is unexpectedly saved by the mysterious John Smith as the Kyle Reese character. Smith helps Katia escape to Berlin’s US Embassy – a stand-in for The Terminator’s police station. Agent 47 storms the Embassy (in his own way) and Katia and Smith manage to escape to a hotel, just like in The Terminator… And then we graduate from The Terminator to T2: Judgment Day when Agent 47 tracks them down, shoots Smith a few times in the chest and kidnaps Katia. The big twist: Agent 47 was a good guy all along.

With another expository punch to the face, Katia learns that she is part of Agent 47’s super soldier program too and that her real name translates into “ninety” (as in Agent 90). She learns that she has “enhanced survival skills”, which is just spidey-sense amped up into nonsensical future sight; that John Smith of the not-evil-sounding-at-all Syndicate International was actually a bad guy all along – twist! – and that Syndicate is hunting her long-lost father to revive the program that created her and 47.

This is where Hitman: Agent 47 takes a hard right turn into sci-fi superpower shenanigans, because it was released in 2015, so of course it does. Katia discovers her power of Instinct Mode and simply “knows” everything around her. Like she’d already played this level before, she uses the giant machinery in what seems to be a jet factory(???) to kill off gunmen from a stealthy distance.

John Smith shows up in a grey-and-white suit – because he’s Agent 47’s rival ya see – and he’s also a T-1000. He shrugs off bullets with the “subdermal titanium body armour” under his skin and beats up 47 in an underwhelming fist fight. Katia uses her video game powers to save the day and they run off.

Hitman: Agent 47 sort of minces along like this for another forty minutes or so. The action just gets more and more ridiculous until 47’s beloved Audi is grappling-hooked into submission and Katia steers a helicopter into a skyscraper on purpose. The action is universally mediocre and almost always stupid, because read that last sentence again.

Remember when this movie was based on Hitman?

Even as a video game adaptation, Hitman: Agent 47 is more wrong than right.

At least the title character himself is far more faithful than last time. Partly because he plays the grim reaper for the first twenty minutes, which is far more appropriate for Agent 47 in general – I still think the best idea for a Hitman movie is a black comedy version of Clue or a slasher movie where all the victims are ultra-rich dirtbags – but also because Rupert Friend puts in the work. Even when 47 softens up after the first act, he strikes a likeable balance between unfeeling robot and almost-compassionate mentor.

Friend’s Agent 47 is the best part of the movie by a gigantic margin. Everything else is a messy mish-mash of original creations and tweaked imports from the games.

Agent 47’s clone background is brought over almost wholesale from the game series (he was an abducted orphan in the previous film) and his handler Diana gets about ten seconds on-screen compared to the nil last time. He still uses his pair of Silverballers, he uses his fiber wire exactly once and, just like last time, the yellow rubber duck shows up apropos of nothing. There’s a total of three disguises but they’re used more like props – we’ll see 47 wear a disguise and then the movie will cut away, so we can just assume he was “successful” in using it. Exciting stuff. Even the violence is toned down to the point of more resembling the games; folks aren’t bursting into red puddles anymore.

Otherwise, the film’s lead Katia is wholly original, and so is the “secretly” evil Syndicate International and its villains John Smith and Le Clerq. There’s a lot of heart-to-heart moralizing throughout the film (not very Hitman-like at all) and, as I described earlier, Agent 47’s only mode is Murder Everyone With Guns. I was shocked that, by the end, 47 hadn’t stealthily assassinated anyone. He just openly murders them.

At least he used his Silverballers to do it. I guess. 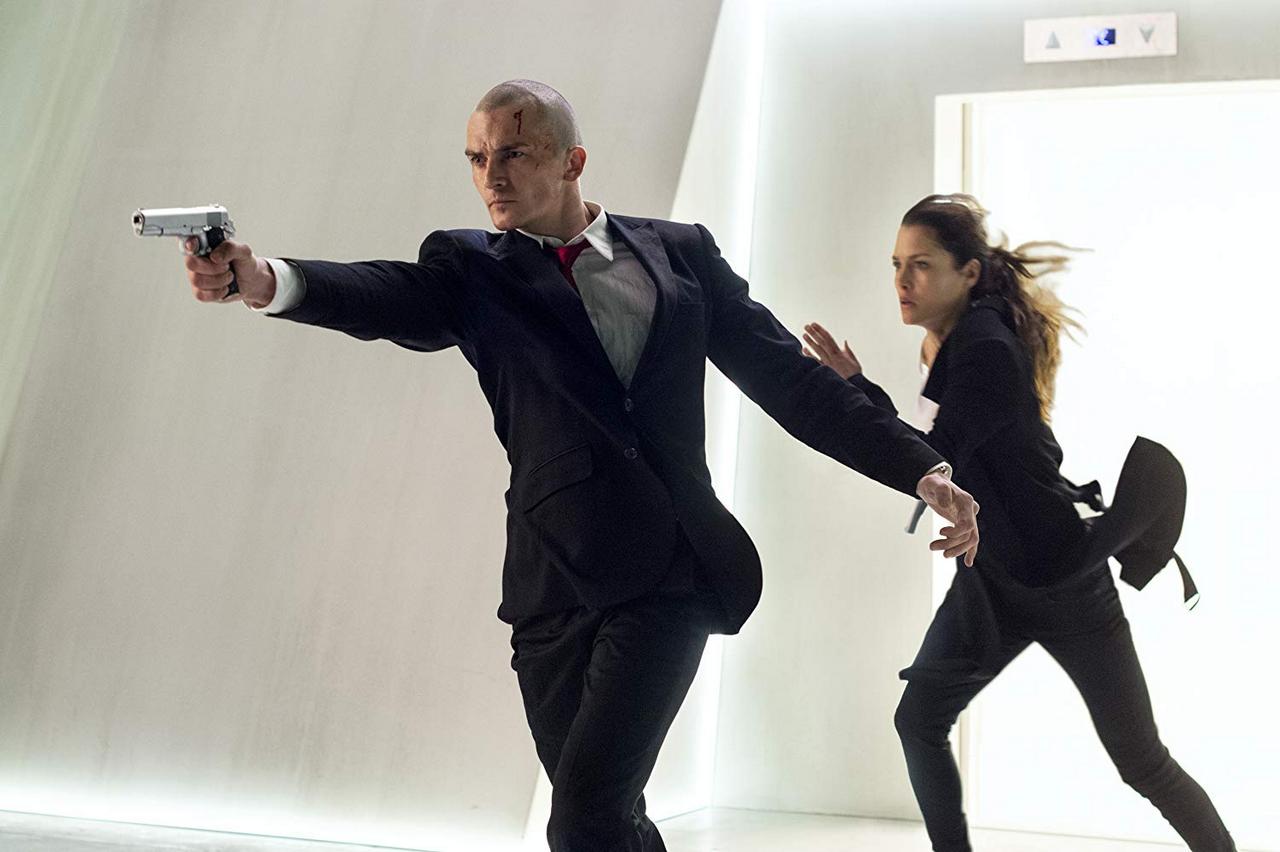 Like a chaser after the cheapest scotch you’ve ever tasted, the news that there’s more Hitman on the horizon is exactly what I needed. Like so many of these stupid movies I watch for this column, it’s so thoroughly mediocre that it’s mind-numbing and agitating in equal amount.

Outside of Agent 47 himself, it lacks almost everything that makes Hitman Hitman.

[…] his latest Press X to Adapt piece, John wrote about how Hitman: Agent 47 presents as a more faithful-yet-worse adaptation of the action video game […]