Playing Video Games is Helping Me Get to Law School

Like many people, I’ve been spending a lot more time locked up in the house over the course of 2020 due to the COVID-19 pandemic, and like many of us, I’ve also found myself playing my Switch in between major Netflix binges, longing for the day I can go out again without having to worry about curfews, restrictions and social distancing. However, after watching yet another episode of Suits and realising that, unlike Mike Ross, I actually do need to go to law school in order to practice law, the guilt finally overcame me and I decided that this would be as good a time as any to prepare to take the Law School Admission Test.

More popularly known as the LSAT, the Law School Admission Test is a three-hour multiple choice examination designed to test a candidate’s reading comprehension abilities as well as their logical and analytical reasoning. It’s predominantly an American thing — hence my explaining it here — but some universities in Australia require you to take it, and score significantly well on it, in order to get accepted into their law schools.

The test itself is divided into five sections, with at least one of those devoted to a category called Analytical Reasoning. The Law School Admission Council (LSAC; the organisation that prepares and administers the LSAT) officially describes the purpose of this particular section as to “test your ability to consider a group of facts and rules, and given those facts and rules determine what could or must be true.” Historically, many students struggle with this section; due to the way in which they’re presented, the scenarios given can be difficult to understand and take up a chunk of your time. Here are three examples:

All of these questions are difficult in their own right, and you can’t expect to simply work them out in your head; you’re going to have to do some serious ground work, coming up with inferences about what must be true and false before filling in the gaps. Often, this will require you to draw a diagram that becomes confusing in and of itself, especially if there are conditions that can only be true if one or more of the elements is in a particular position.

Here’s the kicker, though: only one of the three questions listed above, the third one, is an official LSAT question — the other two are puzzles that I’ve come across in Professor Layton titles. Both of those puzzles are considerably less forgiving than the LSAT’s one, because they don’t come with a selection of answers to choose from, which means that trial-and-error is an almost-impossible method to solve them… unless, of course, you were willing to spend a whole hour running through every possible solution. 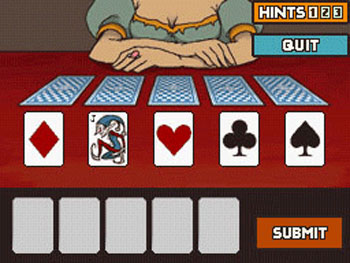 The “Card Order” puzzle from above, in its natural habitat (this is the correct answer)

Level-5’s Professor Layton series is a set of puzzle-adventure games released on Nintendo’s DS and 3DS systems between 2007 and 2015. The series follows the titular Professor Herschel Layton, an archaeologist who goes from place to place with his self-proclaimed apprentice, Luke Triton, solving mysteries in order to find ancient artifacts and/or solve crimes… kinda like Indiana Jones, if Indiana Jones didn’t frequently find himself in mortal danger. The series has developed a cult following, with critics and members of the public alike praising its memorable characters and stunning graphics (considering the hardware limitations Level-5 had to contend with), with the greatest praise directed at its gameplay and stories.

The Professor Layton series’ success was such that Level-5 rebooted the series, with 2017’s Layton’s Mystery Journey: Katrielle and the Millionaires’ Conspiracy (Android/iOS, released on Switch in Japan in 2018 and worldwide last year) focusing on Layton’s daughter, a private detective named Katrielle. Layton’s Mystery Journey is a very different game from the “original” series: aside from the new cast of characters, which includes a talking dog named Sherl, it also tells its story in a very different way. The result was a mixed critical and public reception, but still a rather successful entry into the series.

Unlike other puzzle-solvers like the Dr. Kawashima’s Brain Training series, the puzzles Level-5 presents in its Professor Layton entries have always been connected to an overarching plot. When you’re playing through these games, they really make you feel like you’re trying to uncover something, rather than doing a bunch of puzzles just because. It’s a great take on the “brain training” formula, and a fantastic way to sneak some educational elements into a video game. 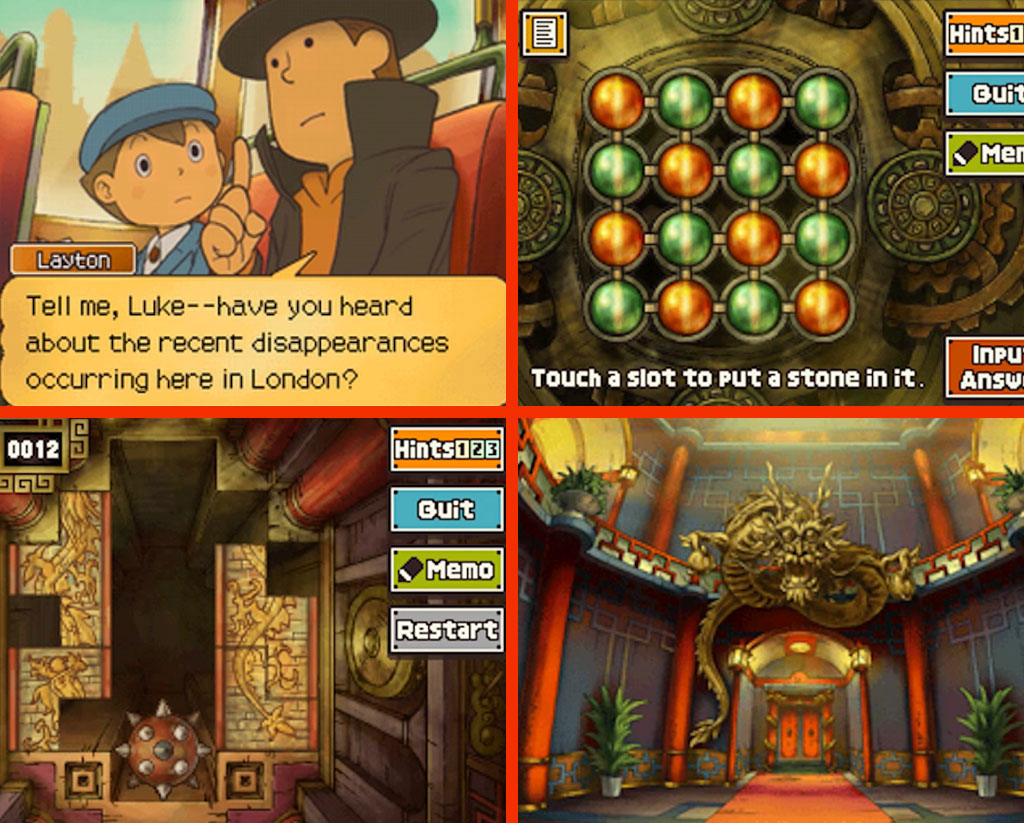 Although it feels as though you’re playing a video game like any other, solving these puzzles just to further the plot and find out what happens next, what games like Professor Layton and its ilk are actually doing is encouraging you to make deductions and assumptions about the puzzles you’re facing. Those are the exact same skills that the LSAC is trying to test with the Analytical Reasoning section of its LSAT — which is exactly why the two Professor Layton questions I shared earlier in the piece could pass for actual LSAT questions.

Of course, not every puzzle that you encounter within the Professor Layton series is going to correlate perfectly to an LSAT question. Some of the puzzles you’ll find in Professor Layton will never have a counterpart in the LSAT and vice versa, because Professor Layton isn’t based off the LSAT — the fact is simply that the skills required to solve many of Professor Layton’s puzzles will be similar to those you’ll need to use when solving questions on the LSAT.

Although some critics will correctly assert that playing video games will not be adequate to prepare for a test like the LSAT, I’m not suggesting that video games should replace more traditional study. Of course, going into the LSAT without doing an actual practice test in test conditions would be a very risky move, but as we can see here it’s simply wrong to dismiss video games’ ability to supplement good study practices just because they’re games that are made to have fun. The aforementioned Professor Layton puzzles, for example, invite you to implement a skill that you’ll be using in the real world all the time, and the fact that it does so “subtly” (you know, without saying “this is an LSAT practice question”) can help take the pressure off. Just like the notion that video games cause violent behaviour, it’s high time that society stops pushing the notion that games “rot your brain.”

Hell, Professor Layton isn’t even the only game that aids in building players’ “LSAT-relevant” skills — there’s also Phoenix Wright: Ace Attorney and the series that came of that, which can encourage the development and practice of logical reasoning skills (another section of the LSAT) by asking the player to read critically and discover inconsistencies in the information being presented to them. That’s not to say that having completed all of the Phoenix Wright games should be a prerequisite to be a lawyer or anything like that, but it’s difficult to deny that putting players in these situations would help them develop skills that can transfer into the practice of law later in life.

We can even see evidence of video games’ benefits in other areas of education. Companies like Microsoft and Valve have capitalised on these benefits as well, offering educational versions of games like Minecraft and Portal 2 — Minecraft’s is still live, requiring a valid Office 365 subscription, while Valve’s Portal 2: Education Edition, which contained the single-player campaign and a Puzzle Maker mode, was available for free. Although the latter is no longer available, it received high praise for its applications in teaching fundamental physics and advanced mathematical geometry, as well as for the fact that Valve didn’t create any content for the game itself (aside from the single-player campaign), instead providing the infrastructure and tools for educators to build their own lesson plans and execute them through Portal 2.

Again, I’m not suggesting that we should completely forget everything we know about traditional education and replace it with video games. Instead, I’m advocating the idea that certain video games should become more widespread as a tool in institutions such as school and universities, to supplement the existing curricula in a way that students wouldn’t expect (and in a way that they would enjoy). As clichéd as it might sound, if you ask any student whether they’d rather learn about fundamental physics through a series of formulae and hypothetical lessons or through live application in a game like Portal 2, many will choose the latter; either that, or educators could use video games to demonstrate lessons they’ve given, reproducing things they otherwise wouldn’t be able to.

Of course, exactly how teachers would implement video games into their curricula is a much bigger discussion, because it depends on a variety of factors including catering for students’ individual needs. For now, though, I’ll continue to treat Professor Layton as a supplement to my regular study and practice methods, because you never know — I might just come across a question that reminds me of something I saw in Professor Layton.