Out of all the games I’ve played, P.A.M.E.L.A. most reminds me of two: System Shock and Subnautica. That’s not a point of praise, though — the similarities that stuck out the most were its clunky gameplay features, poor signposting and AI issues, and P.A.M.E.L.A’s story isn’t good enough to make up for those problems. One thing does stand out as an absolute positive, and that’s the fact that developer Nvyve Studios built the entire game in Unity and have made it look phenomenal. It’s like a scale model of the Eiffel Tower made entirely of pasta… and it plays like it too.

First thing’s first, the negatives. There are some pretty odd gameplay choices throughout P.A.M.E.L.A., and the problems started straight away: Nvyve Studios seems to have gone for immersion, so the in game inventory and skill systems are located on a menu on the player character’s arm. All fine so far, but tutorials are located there too. There’s the first issue: reading. Instead of walking me through its mechanics, P.A.M.E.L.A. gave me a manual and told me to just figure it out. The menu itself is odd to navigate, especially considering that you can still move around while using it. This isn’t the worst problem, and gets easier when you reach a point in the game when you can upgrade your UI, but it does make it unintuitive and that much harder to play in those critical early hours. If it wasn’t my job, I don’t know that I’d have stuck around long enough to learn.

On to my favourite problem: the enemies. I’d like to start by saying I like the enemy designs, which range from assorted zombies to terrifying robots. The zombies look horrific and tend to swarm, while the robots patrol around, occasionally even hunting you down. Behind the pretty aesthetics, though, is a potentially funny problem. The enemies occasionally spawn and walk into places they really shouldn’t. I’ve seen zombies spawn inside my own base (oh, there’s a base building system for reasons). The final boss spawned in behind an immovable piece of rubble and just had to sit there and die, rather than hunt me down like it’s supposed to. I once left a building I’d looted, only to see a swarm of zombies packed up against a wall, trapped. It looked like they’d been either following me, or spawned into the wrong spot all at once. This made for some entertaining moments, but after a while, the humour dies away along with the threat the enemies once posed. 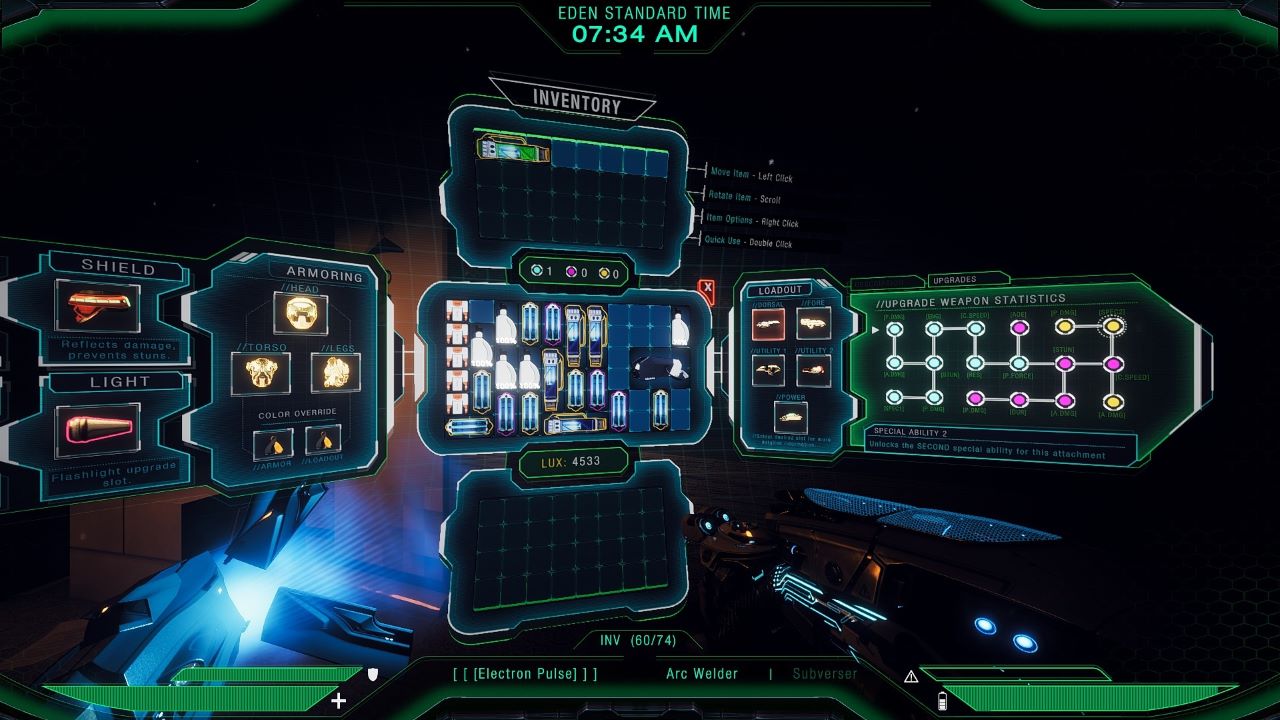 The worst element of P.A.M.E.L.A. wasn’t technical, though: the story was bad. It’s one of those “you just missed it” stories so common in games, the sort where the player character comes in just after something important happens, and then has to clean everything up. This isn’t bad in itself, and Nvyve Studios executed it well enough — I still like Gone Home, for example, and System Shock follows a similar narrative pattern — but the issue is that the player character is entirely disconnected from the story in question. They’re told to save the city, they’re told to get some things, they’re told the city’s going to be destroyed and they need to get in a pod. There’s very little actually creating any emotional connection to the larger world. P.A.M.E.L.A. employs another trope, the “it was all for nothing” story device. Again, it’s been done well in other games (BioShock). My biggest issue isn’t the reliance on tropes though, it’s with the fact that the player character’s survival is secondary… in a survival horror game. Instead of being about surviving first and unravelling a mystery second, P.A.M.E.L.A. tells us everything pretty much straight away, destroying any and all narrative suspense and discovery. The acting isn’t great either, but only one character talks and they’re an AI, so I can give the delivery a pass. The occasional line flub, though, I cannot.

It’s not all bad, though. P.A.M.E.L.A. looks beautiful, and it’s doubly impressive when you consider that it was made using Unity. For all of its poor storytelling and unintuitive gameplay, there’s a cohesive aesthetic, clear signalling of enemies and distinct environments. The weapons look neat, and show their function clearly. There’s even some curious visual storytelling elements, with various notes scattered around the place written in red. There are also elements that are less brilliant: corpses that stand up, locked in a pose perhaps for the sole purpose of confusing me and lighting so dark that everything appears to be in shadow, even during the day, being the most significant of those. Those issues aren’t intolerable on their own, but combined with unpredictable spawns and pathfinding it just leaves me feeling irritated.

As noted, I’m genuinely impressed by the fact that Nvyve Studios developed P.A.M.E.L.A. entirely in Unity, but after experiencing frequent frame-rate drops and noting that other users have experienced the same, I have to wonder if it was worth it. To call back to a visual metaphor, I’d be impressed to see an Eiffel Tower made out of pasta, but I wouldn’t want to walk on it. The Unity engine is the source of at least some of the game’s problems: it crashed at least twice after several hours of gameplay and there were other minor visual bugs that didn’t ruin the experience, but also weren’t a good sign. I suspect that this is an issue with the engine, but that’s speculation and it may well be fixed in future updates. 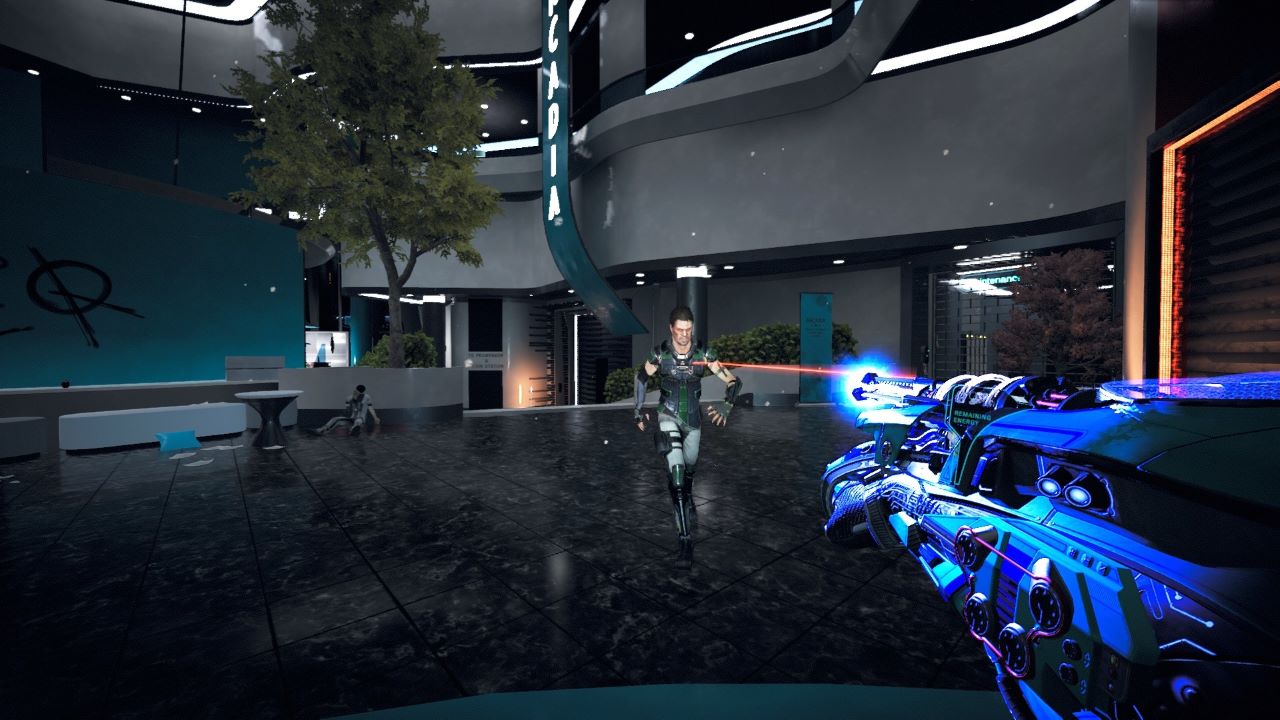 Despite all of its issues, I like P.A.M.E.L.A. It’s a mess and I don’t believe it’s ready for full release, but I can’t deny having fun playing it. As buggy as it is, it’s no worse than some AAA releases, and the team at Nvyve Studios has committed to support P.A.M.E.L.A. after release. The fact that a team this small was able to use Unity to make a game with this level of visual fidelity is absolutely worthy of praise, but not everyone will have the time or patience to work through the game’s issues and I can’t hold that against them.

P.A.M.E.L.A.’s gameplay is fun, but it has a large number of issues that need fixing; people with limited time for gaming, or who play games for the story, will be disappointed with it as it currently stands.