The year 2000 was the height of Pokémania. Pokémon Red and Blue had been massive successes, the original animated series had swept the airwaves, and all around the country schools were banning the trading card game in an attempt to mitigate some of the chaos that Pikachu and his friends had created. Myself and many other impressionable young sprouts were desperate for more Pokémon content and my parents — bless them — were plugged into the cultural mania, so on my tenth birthday I unwrapped a brand new Nintendo 64 and one game: Pokémon Snap. It’s a deeply nostalgic game for me, so imagine my surprise and delight when, just a short 22 years after the original’s release, along came New Pokémon Snap.

In New Pokémon Snap, you play as a rookie photographer helping Professor Mirror conduct an ecological survey of a new region called the Lental Islands. There’s no lengthy introduction or deep lore here — the game starts off as succinctly as it plans to continue, immediately putting a camera in your hands and setting you off on your first photo safari via an all-terrain vehicle called the NEO-ONE. The safaris work as on-rail courses, sort of like a very slow rollercoaster, where you can take in the chill scenery and try to snap pictures of various Pokémon living in their natural habitat around you, whether that be in thick jungle, crystalline oceans or the burning heat of a volcano. 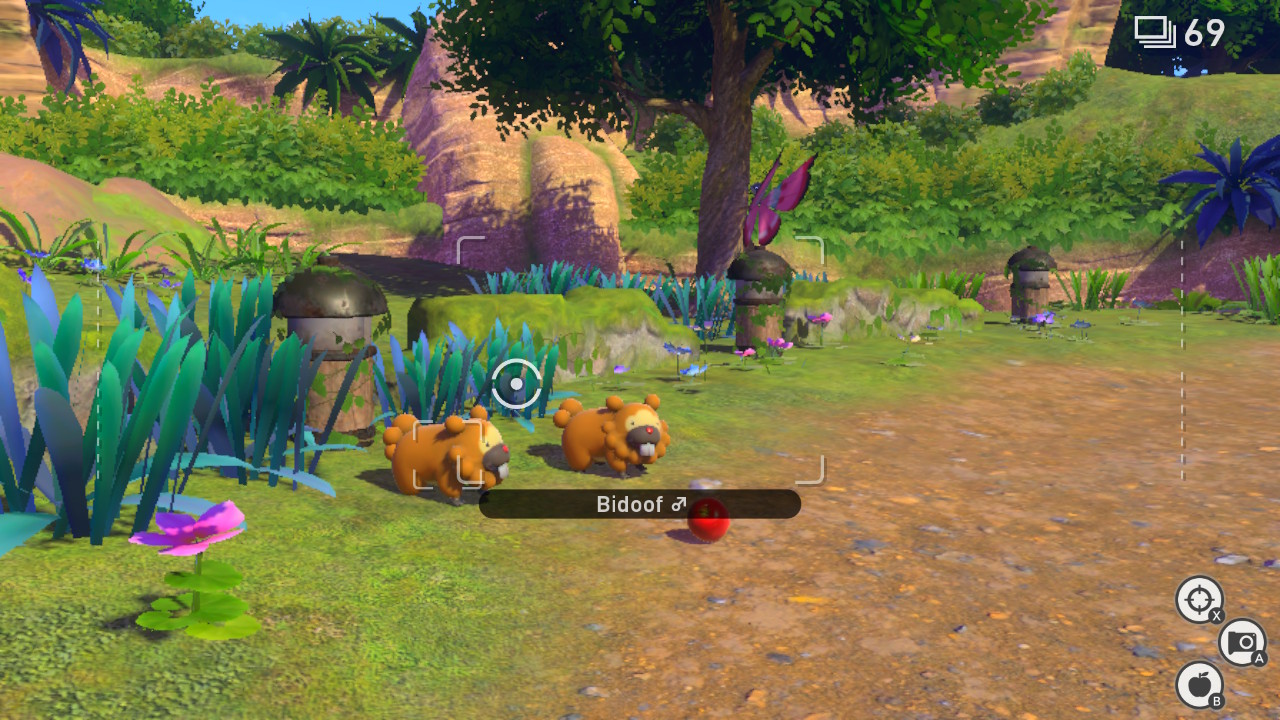 Observing Pokémon is a delight; the creatures run around the environment with enthusiasm and character, and their placement along the track has obviously been well thought out, meaning that there is rarely a period where nothing is happening. There were many moments where I found myself laughing aloud at a hilariously-timed snap or cooing over some adorable behaviour, and it seemed that every time I unlocked a new track I told myself I would take it all in slowly and methodically, only to find myself eagerly turning the camera this way and that to try and drink in every new sight at once. To that end, the game does support motion controls, niftily turning it into a faux-AR experience, but I didn’t use it much as it requires a fair amount of space to turn a full 360.

Once the safari ends, you’ll head back to the Research Lab to have your snaps scored by the Professor. By scoring highly in categories like Pose or Size, your photos will be given a star rating out of 4, with a casual goal of collecting one photo of every Pokémon at each of the star ranking levels. The rating system is easy to pick up, though sometimes you’ll find yourself accidentally scoring much higher on a snap than you really should have, as the game attempts to assign points based on set criteria rather than the eye of an actual human. 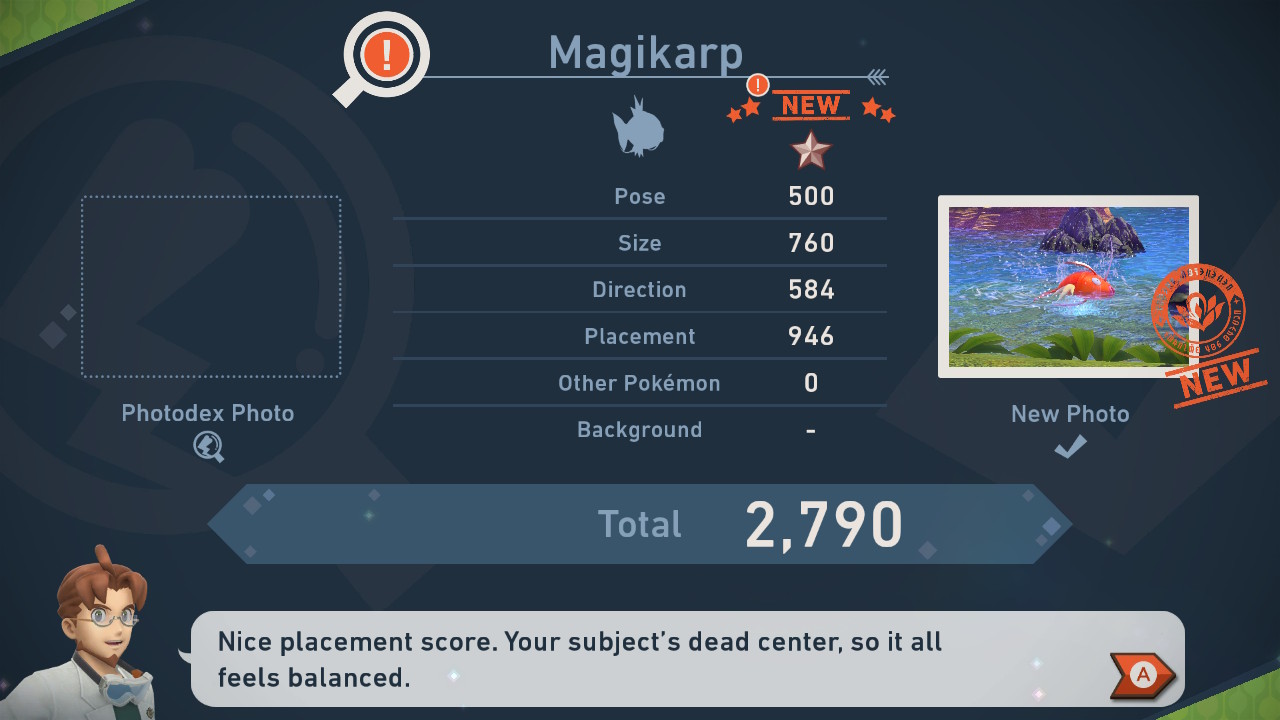 The original Pokémon Snap was not a long game by any means, and it’s nice to see that Nintendo has added some longevity to New Pokémon Snap by way of Research Levels, a kind of reward system for accumulating high scores from the Professor. Each time you increase a track’s Research Level, you unlock new Pokémon sightings, witness changes to the environment in the area, or travel alternate pathways in the NEO-ONE. These changes encourage you to go back over completed areas to spot new photo-worthy moments. The addition of day and night modes means that nocturnal Pokémon are given plenty of screen time, too. There is an in-game challenge board, where the Professor and his research assistant Rita will request photos of particular Pokémon behaviour, adding a light puzzle element to the gameplay as you attempt to work out how to trigger the events they want to see. A post-processing mode lets players jazz up their favourite photos with filters and stickers, and those with a Nintendo Online subscription can share their snaps over the internet with friends. I didn’t make much use of the Online functionality, given that the Switch already natively allows you to upload your screenshots to Twitter, but it does help pull New Pokémon Snap into the social media age.

New Pokémon Snap won’t be for everyone, lacking much in the way of a compelling story and providing little in the way of gameplay variation. It often feels like a love letter specifically to fans of the original game, with references scattered throughout the text and dialogue. At full price, the cost versus how long it will take players to finish will definitely put some people off. That said, the chill atmosphere and low-stakes gameplay will appeal greatly to players looking for that kind of cozy-cute experience Nintendo has previously provided in games like Animal Crossing, or something relaxed to take their mind off real-life worries.

New Pokémon Snap is best consumed in short bursts — while waiting for a bus, during downtime between appointments, or tucked up before bed — and it’s sure to hit the spot for those with fond memories of the original or who enjoy a wholesome palate cleanser to savour in small bites. 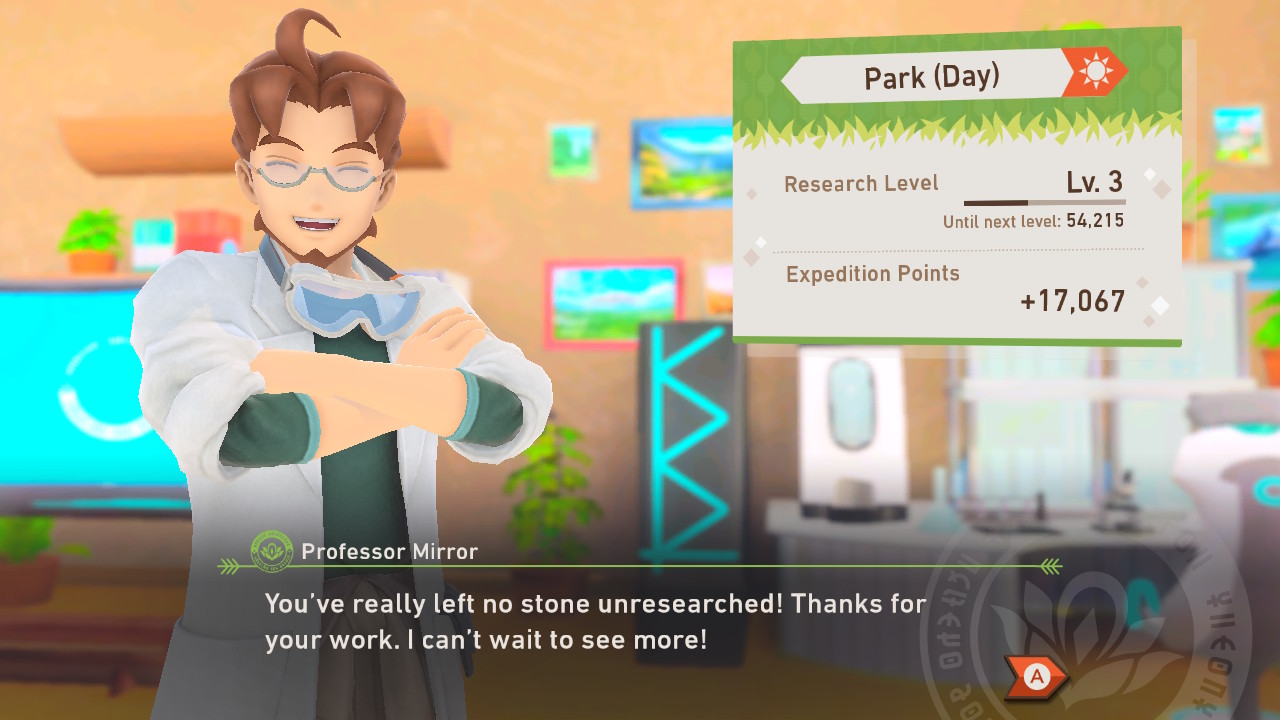